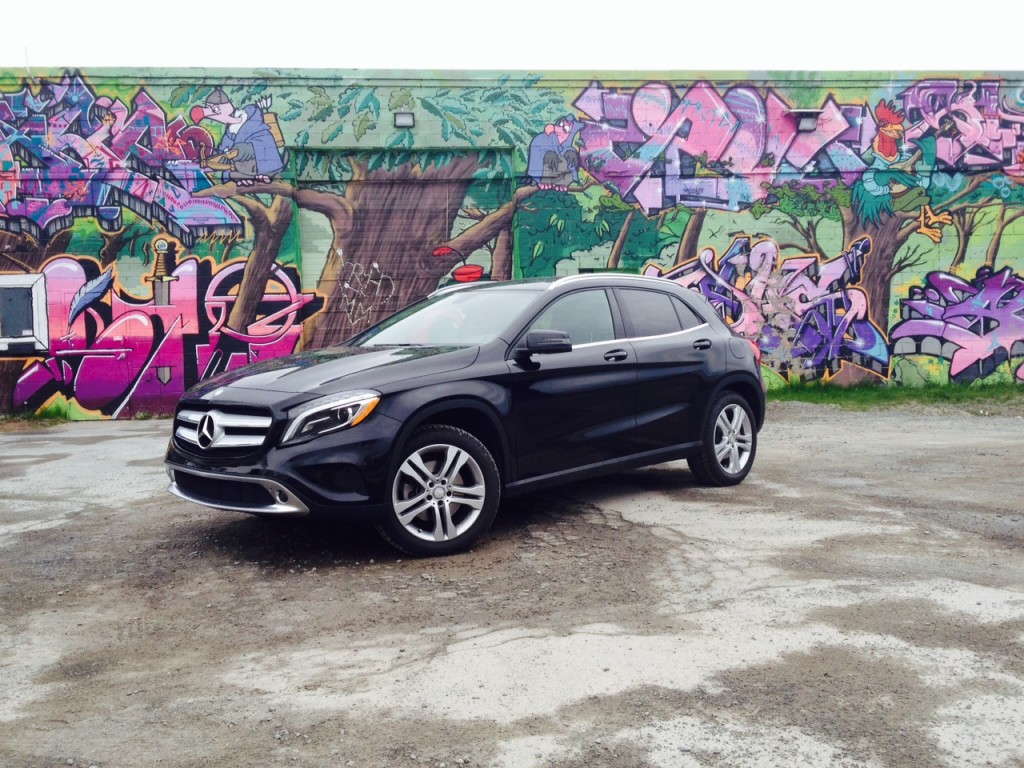 It all started with an argument: is the GLA an SUV or is it a hatchback with raised ground clearance?

Mercedes-Benz would have you believe it’s an SUV.

They claim it as the company’s first venture into the luxury compact SUV segment; a place where its main rivals, Audi and BMW, have been playing in for some time now.

But to this author’s eyes, it’s a small hatchback made higher for light duty off-roading not unlike the Subaru XV Crosstrek or the Volvo V60 Cross-Country.

The results from my very unscientific poll would seem to suggest that the majority of people who see it in person agree with me. 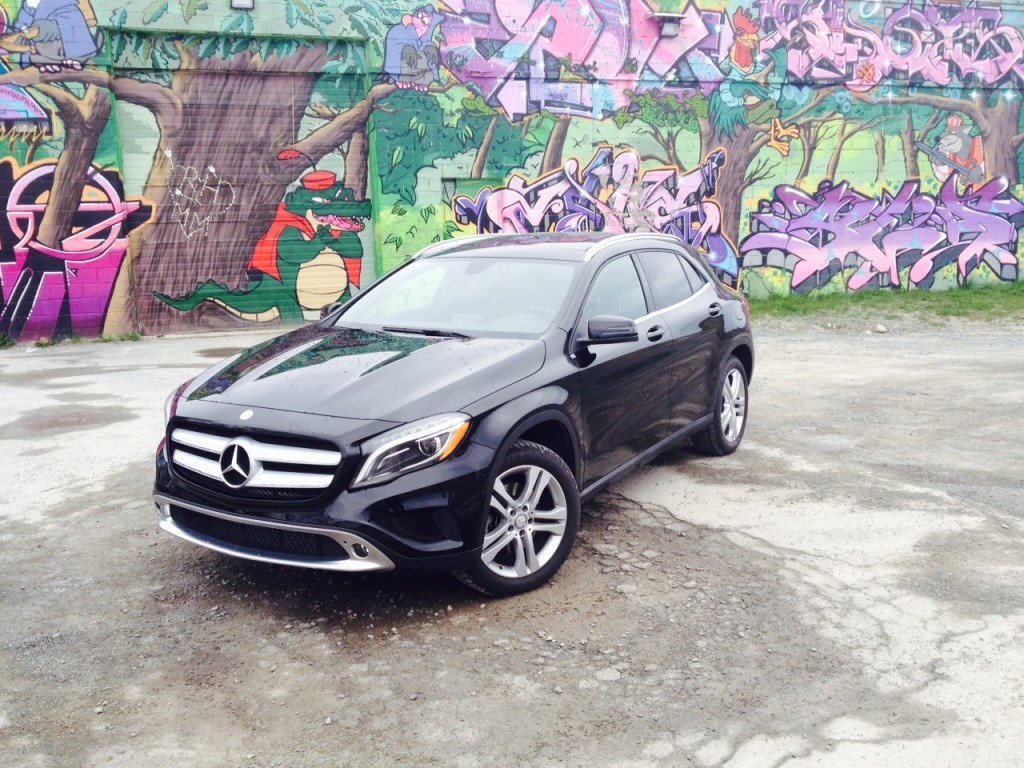 One a lot of people did concede, however, is that the front-end styling is very SUV-like. I agree, and in fact, I’d name the front end as being the GLA’s best view. In 250 guise, the GLA gets two chrome accented bars on the grille while the hotter GLA 45 AMG gets a single bar with a black mesh grille. Both work well and if you opt for Mercedes’ Premium Plus package, you’ll get equally attractive LED daytime running lights, LED turn signals and bi-xenon headlights. This matched with the grille and the massive Mercedes symbol on the front certainly turned some heads. While the standard 18-inch wheels are fine, you’ll definitely want to opt for the sport package which will add lots of AMG appearance bits and wheels which I think match the vehicle a lot better. Out back is where things sort of fall apart for me. The tail lights seem cartoonish and the overall rounded shape makes my raised hatchback argument a lot more compelling. Regardless, people were curious as enough to come up and ask more about it. 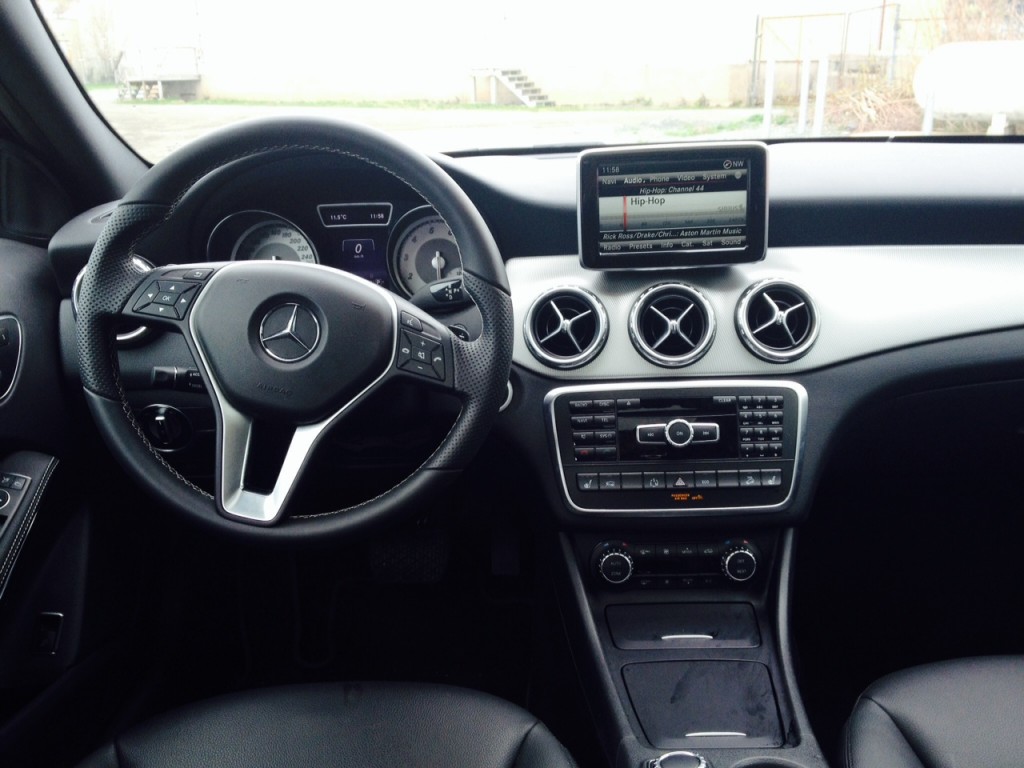 If you’ve ever been inside a modern day Mercedes, the interior will be a familiar place for you. The GLA 250 gets a column mounted shifter (which may add more credibility to the SUV side) and its placement works rather well. It allows for for more storage room in between the two seats. However, shifting into reverse seems to always take the GLA and the back-up camera by surprise as it hesitates to execute both. The vents, which seem like they are a big fan of the letter X in cursive, were polarizing to most as was the infotainment screen which seemed like an afterthought. A friend of mine commented that it looked like a Tom Tom device. However, the system itself is surprisingly uncomplicated to operate. While it isn’t a touch screen, the dial to control it is simple to get used to and it inputs commands a lot more consistently than most touch screens do. 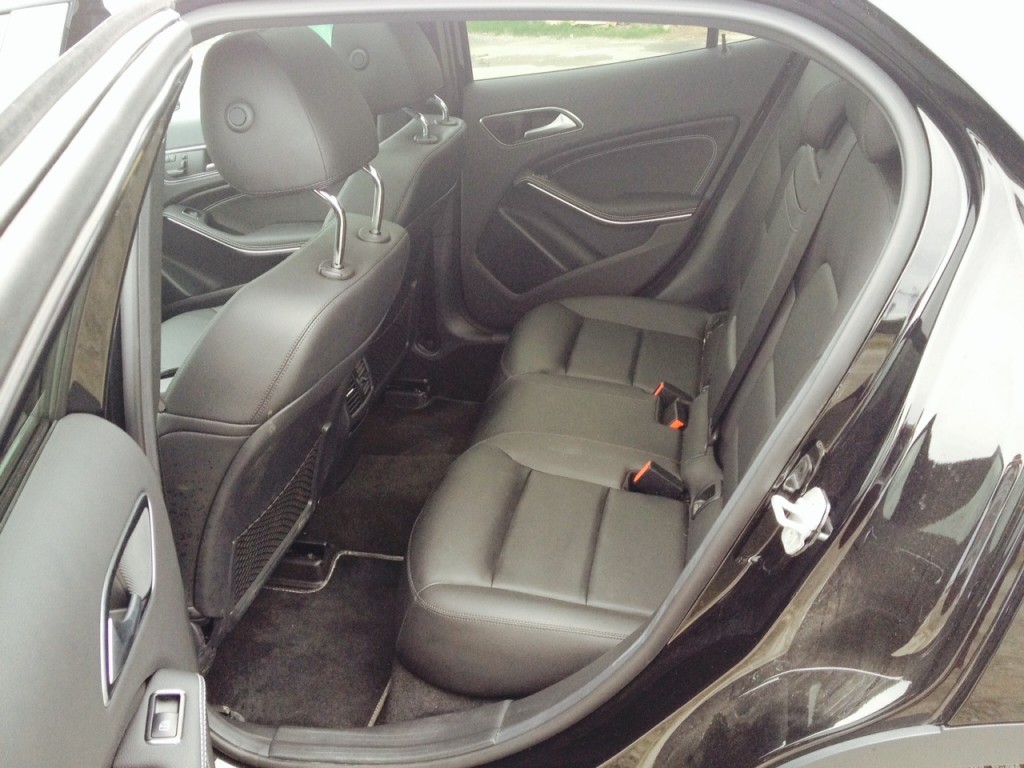 Sitting inside is not the best place to be if you’re claustrophobic, however the seats are comfortable and headroom is actually quite good. My tester had the optional power lift gate (again, score one for the SUV side) which, when opened, reveals an adequate amount of storage space. The seats do fold which increases space for larger items. 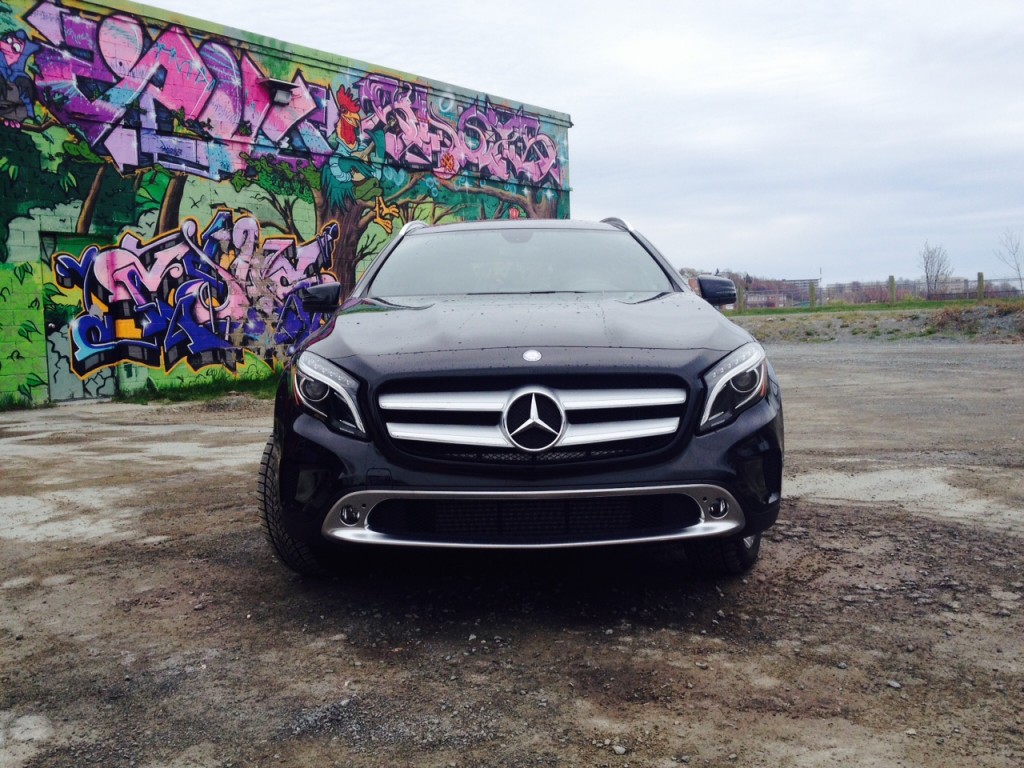 The 2.0 litre turbocharged 4-cylinder engine is good enough for 208 horsepower and 258 pound foot torque mated to a seven-speed dual-clutch automatic. You cannot get a manual transmission in any current Mercedes product, sorry. But the shifts are fairly quick and you do get steering mounted paddles for manual shifting if desired. Power is a tad delayed as the turbo spools up, but the low end torque still gets you moving. When both are working in tandem, it’s like the GLA has been catapulted by a sling shot. I wished the power and transmission worked a bit smoother together, but there is no doubt the little hatchback can hustle in a hurry. You quickly forget about the awkward idea of a four cylinder Benz. 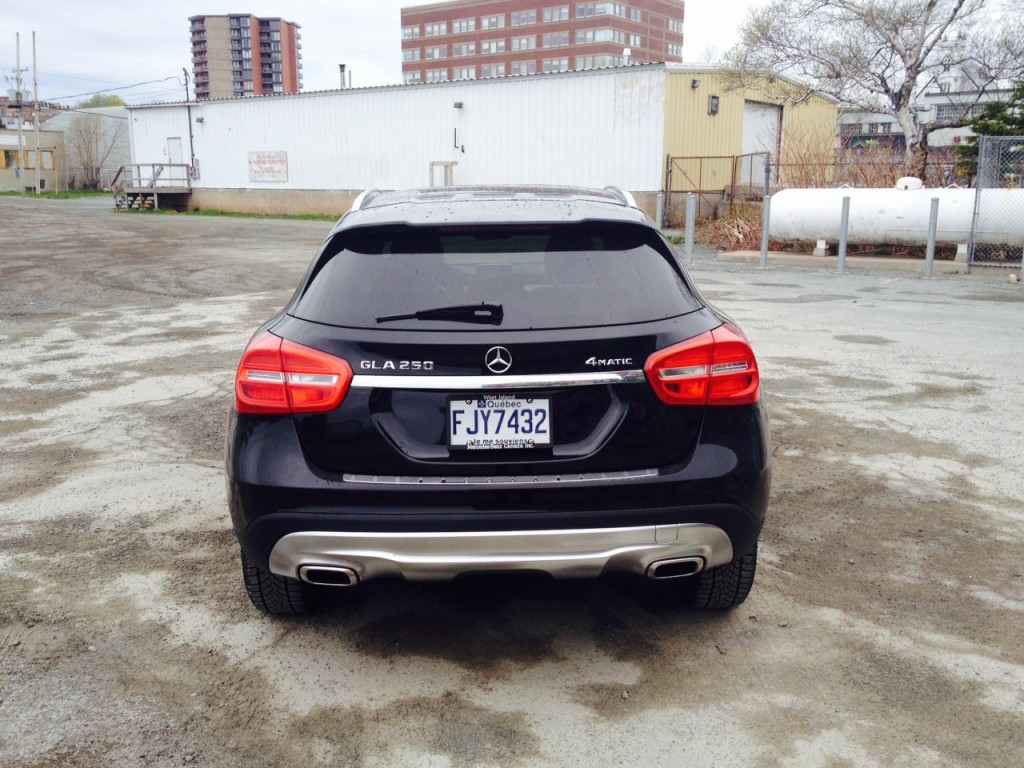 On the highway, it feels very German, that is to say it feels solid, well planted and surefooted. The same can be said when taking a corner, however you need to keep in mind that this hatchback is desperately trying to be an SUV, so if you are cornering hard, you will get some body roll and understeer. I did not have the opportunity to take it off road or try it out in the now, however I can say confidently that the GLA would feel right at home, especially with that excellent 4Matic all-wheel drive system. 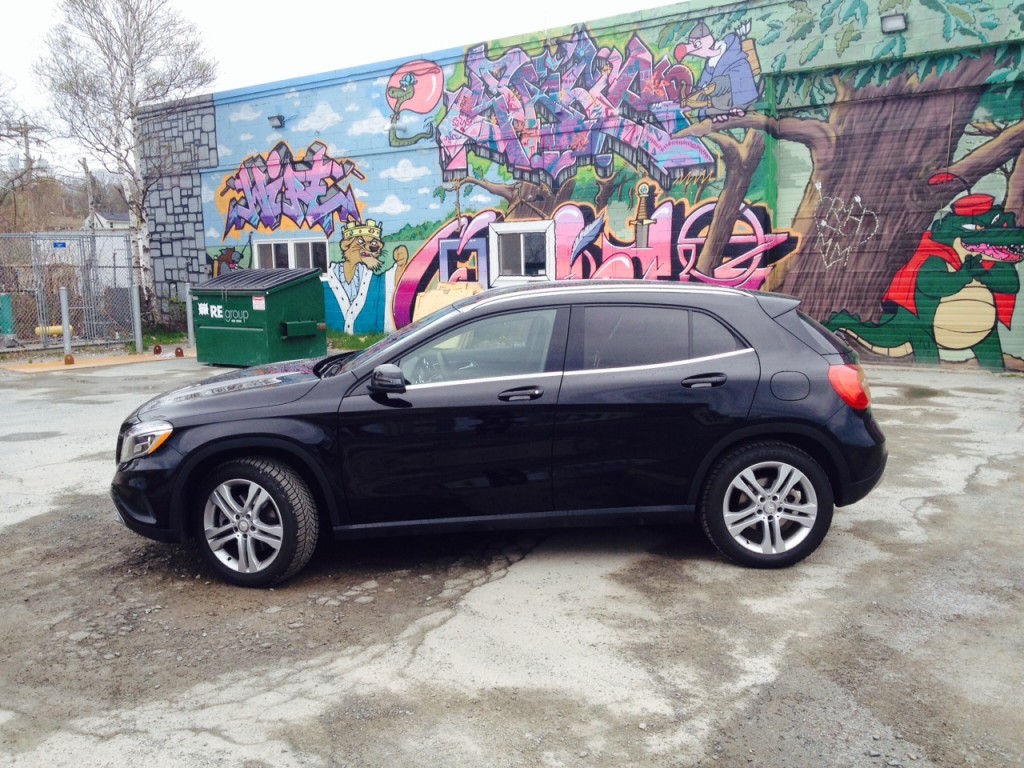 The GLA comes with three drive modes and oddly enough none of them are ‘normal’ mode. You get ‘Eco’ mode, ‘Sport’ mode and manual mode. Eco mode is about as soul sucking as you would imagine it to be and sport mode allows for a lot more fun and manual mode is probably the closest to feeling like you’re driving a true manual. I will say that the engine braking in manual mode is a little too intense, but it does at least allow for greater control over the vehicle. However, since there is no ‘normal’ drive mode, the GLA defaults to Eco mode every time you start it up which gets supremely irritating. 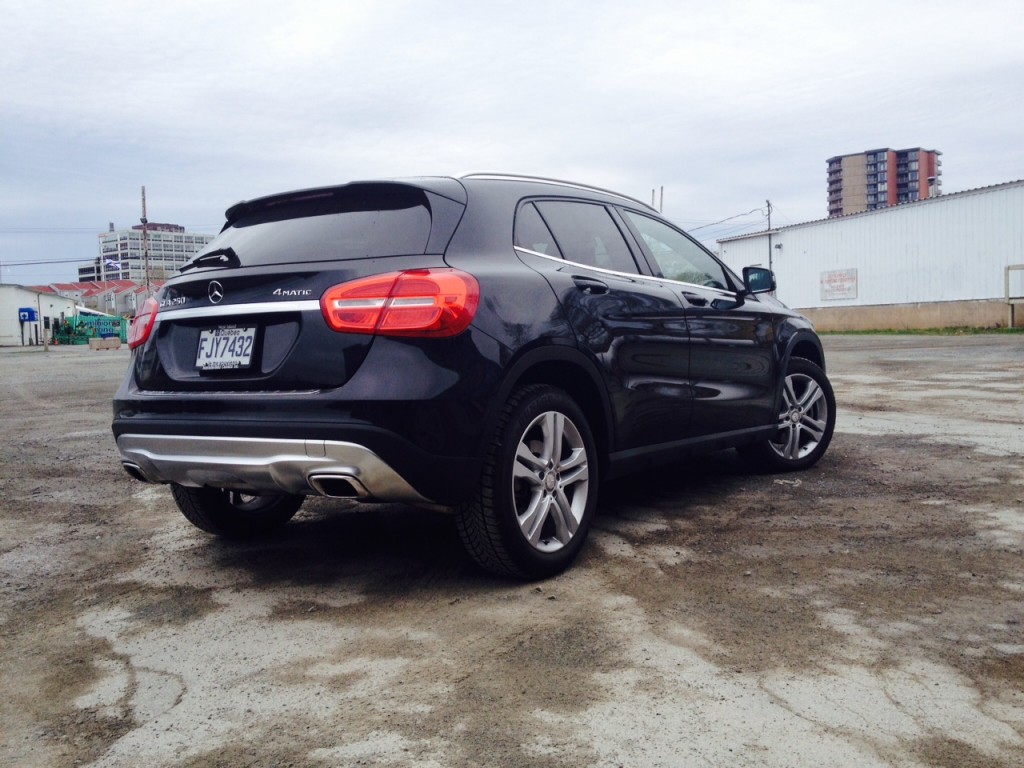 Compact SUV or jacked up hatchback, whatever you want to call it, the GLA is certainly a credible offering in either segment. It has eye-catching looks, good power and handling. In other words, it’s still a Mercedes through in though. 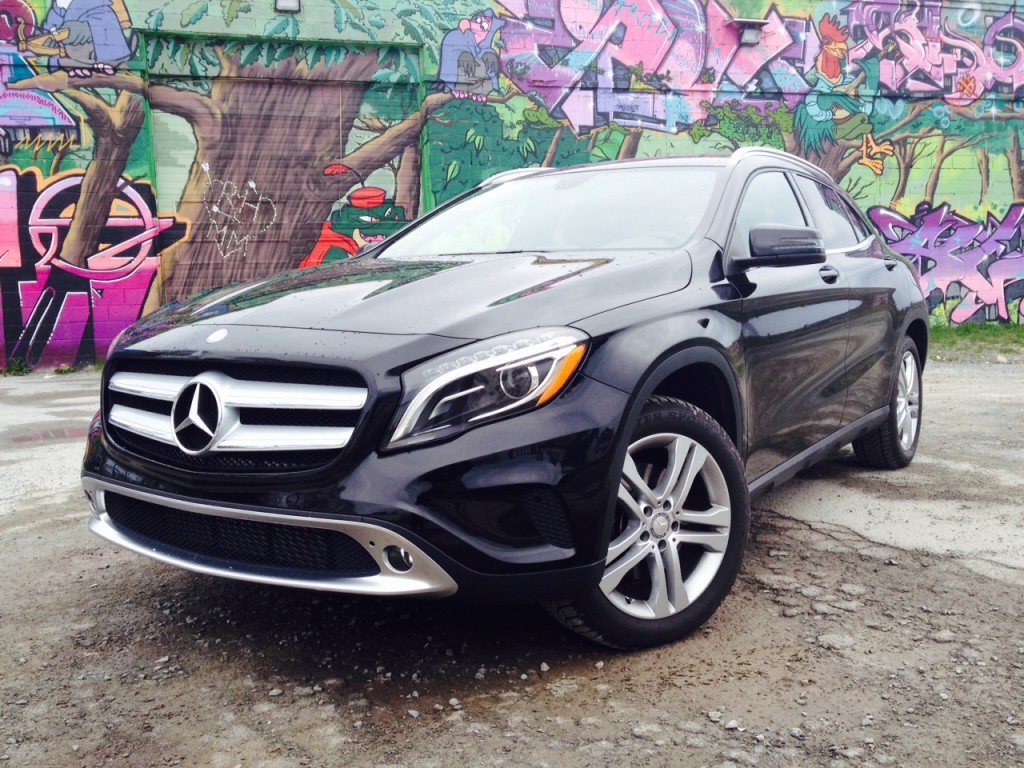