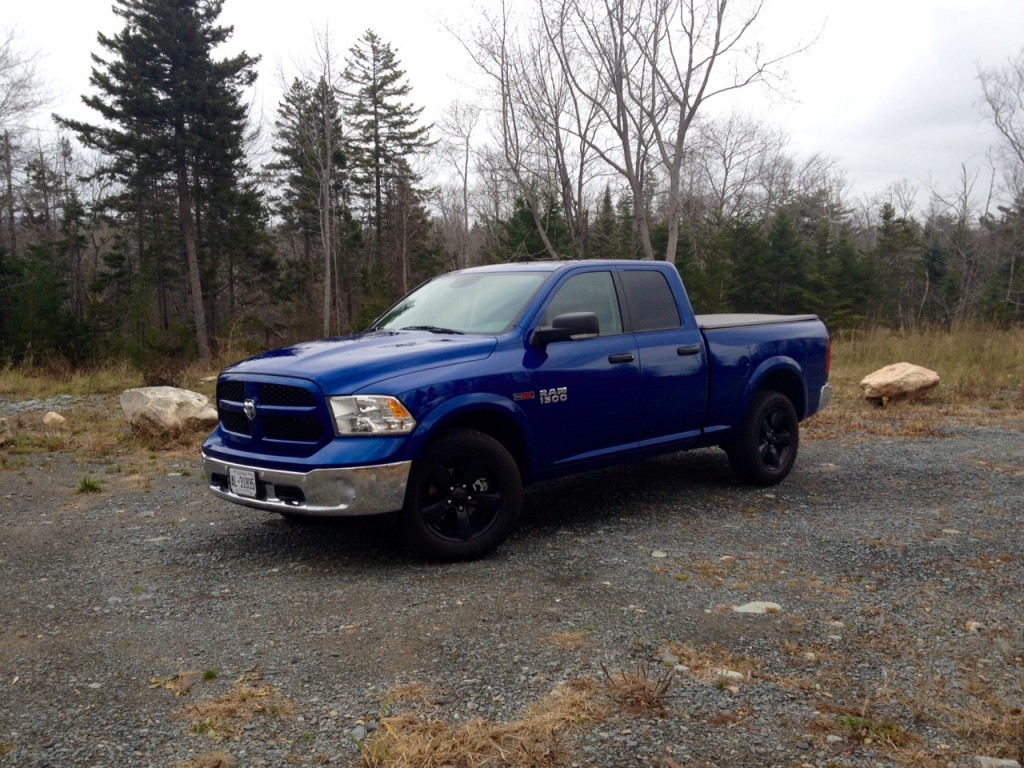 Personally I could never see myself owning a pick-up mostly due to the fact that if I had that sort of money, I would definitely spend it on something a lot more capable performance-wise. That being said, I have to admit to having a soft spot for driving pick-ups.

I’m not sure what it is, but there’s something about pick-ups that are inherently appealing. It may be the go-anywhere, haul-anything capabilities, or maybe it’s the fact that most trucks these days are pretty darn good looking. 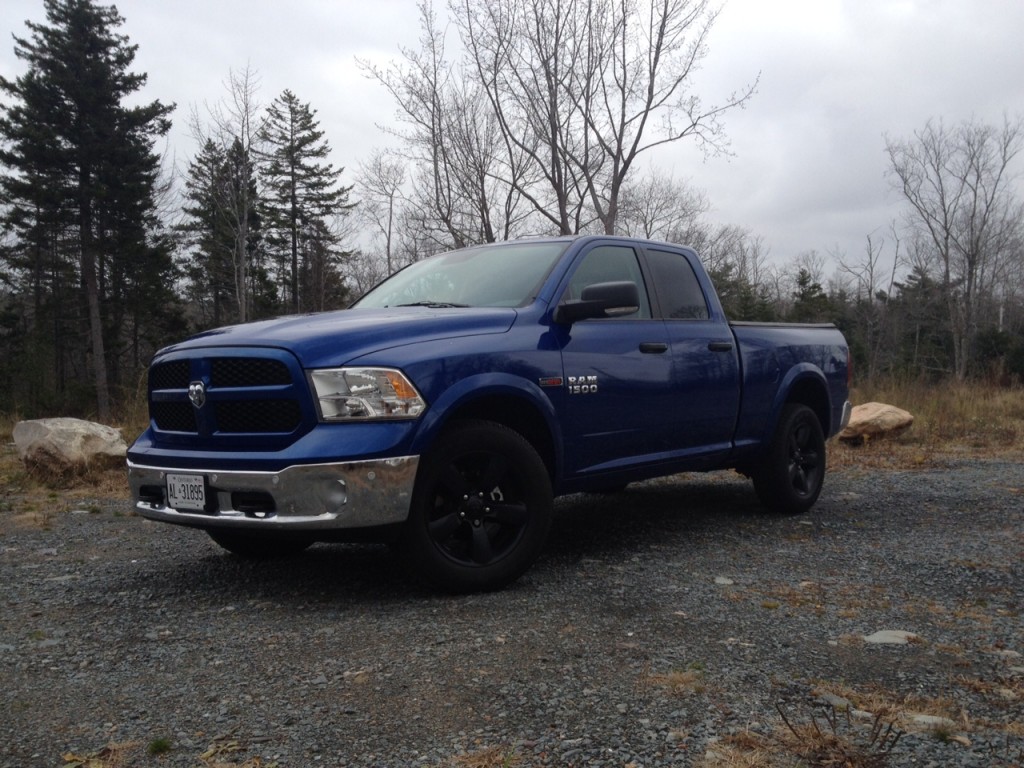 Case in point, the Ram 1500. The current version has been around for some time now but I still think it’s one of the best looking pick-ups on the road today. And Fiat-Chrysler Automobiles (FCA) must know that too because the only things they’ve done to keep the Ram fresh is minor facelifts here and there, plus more accessories to choose from. And to show just how many ways you can spec out a Ram, my tester came with Blue Streak Pearl paint, a chrome bumper, black wheels and a tonneau cover. In all the years the Ram has been around, I don’t think I’ve ever seen one spec’d out this way. As such, it stood out. A lot. Twice I came out to the truck in a grocery store parking lot to find someone eyeing the truck up and down with creepy amounts of precision. They were both self-proclaimed “truck guys” and both had never seen a Ram that looked like this before. They gave their approval. Personally, I like the black wheels and the tonneau cover, which by the way helped in keeping my aunt’s luggage from flying out of the bed on a trip back from the airport, but matching them with the blue and the chrome is a bit questionable to my eyes. But to each their own. Speaking of that tonneau cover, I wasn’t able to figure out how to completely take it off. That could be because it’s overly complicated but it’s also entirely possible that it’s because I may lack the patience necessary to give it a good try. 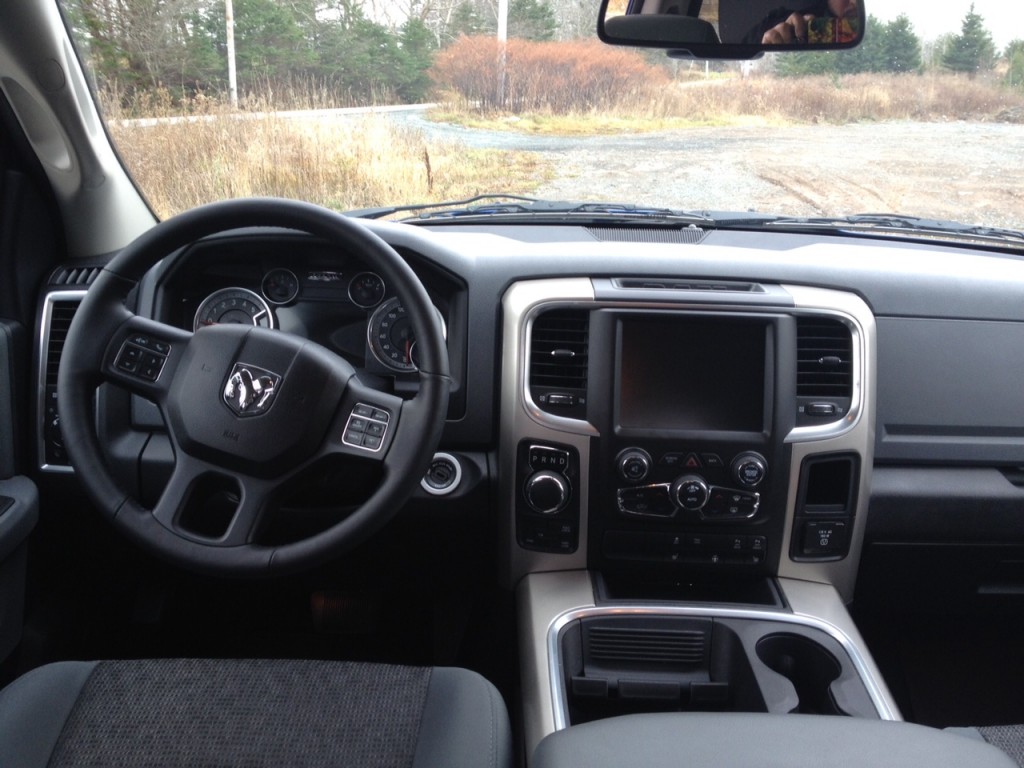 Inside, you’ll find that not much has changed since the introduction of this generation Ram but that’s not necessarily a bad thing. Everything is straight forward and my tester included Chrysler fantastic U-Connect infotainment system which I believe to be the best in the business so far. It’s was to use, responds to commands and it is clear to read and logically laid out. The only complaints I’ve read about U-Connect is that you have to go into the system to turn on the heated seats and heated steering wheel. While I never particularly found that to be much of a problem, it seems Chrysler has been listening as they’ve also added traditional buttons for both for quicker access. A note on the seats though, there are two settings and you’d be well advised to just keep in on the first setting because if you have it on the highest setting you’ll likely roast your rump. They get super hot quickly which in a way is good, but then it become unbearable after a moment. 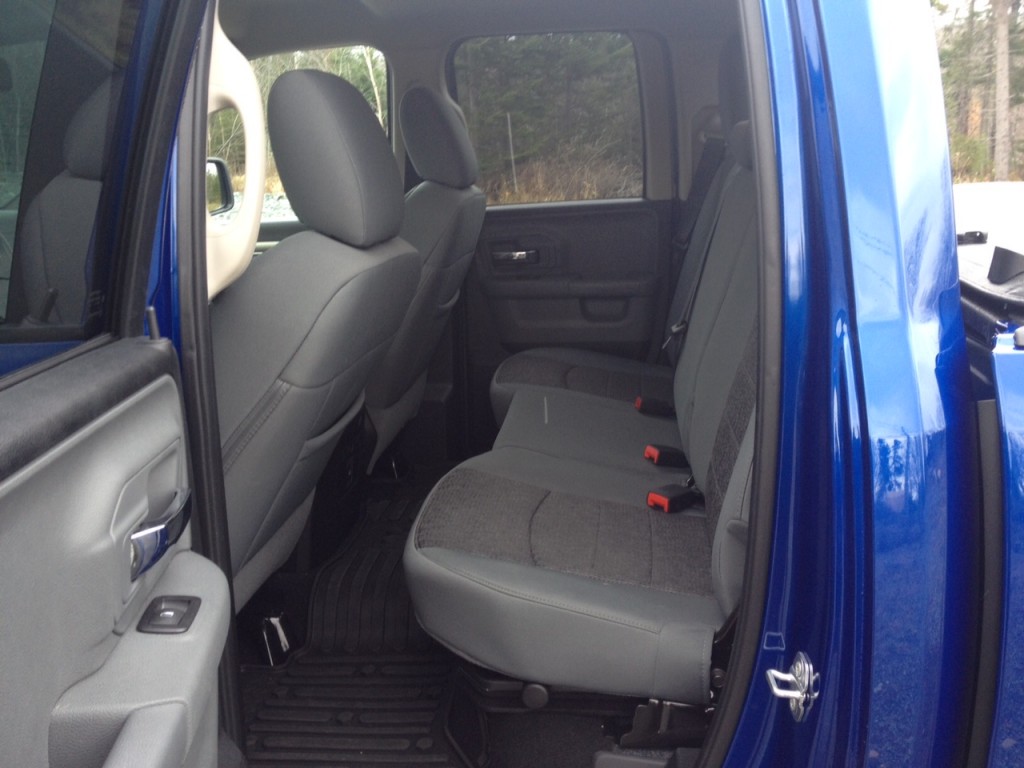 In addition to the traditional buttons there is a dial in place of a traditional column mounted gear shift. I don’t like it. Not only is it immensely satisfying to yank down on a column shifter in a pick-up, but the dial does take a bit of getting used to. And it just doesn’t convey the inherent masculinity of a pick-up. The advantage, however, is that is down free up space and you get a lot of different storage areas between the seats, not to mention a storage compartment that can and will swallow up your entire lap top. 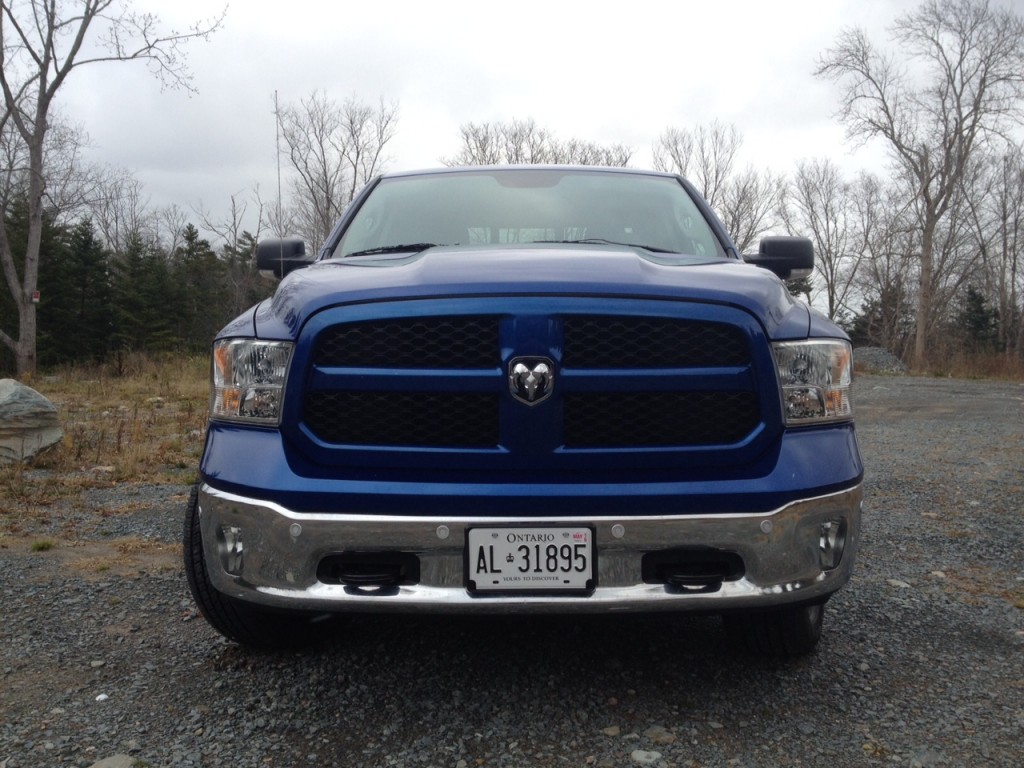 My tester was configured with a quad cab, meaning there was room for passengers in the back, but not as much room as you’d find in a crew cab. The upside is more bed length, and I found the quad cab to do just fine for passengers and even cargo. The rear seats can be folded upward to house taller items. Rear seat leg room is adequate and so is seat comfort back there. One thing I would consider ordering for this trip would be some side steps. Getting into it was always borderline embarrassing, and I’m not even short, I’m close to six feet tall. 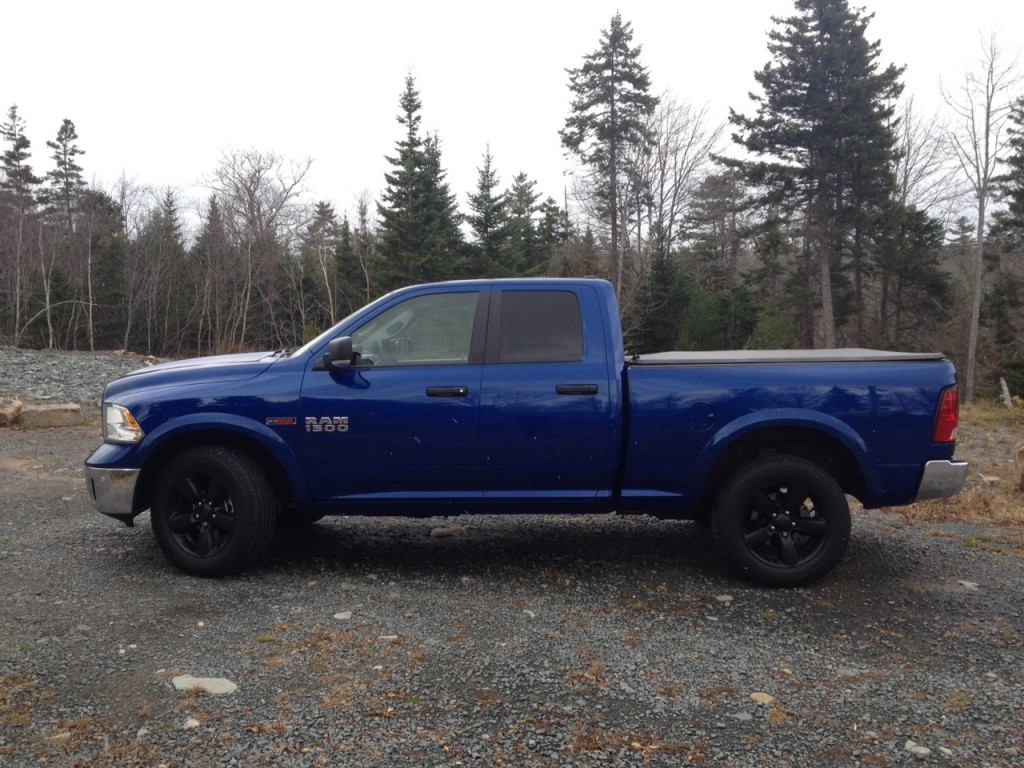 There’s an array of engines to choose from for the Ram 1500, the most famous being the HEMI thanks to those redneck commercials from the late 90′s and early 2000′s, but today FCA smartly wants to push their Ecodiesel engines instead. Not only is it currently the first  and only diesel available in a half-tonne pick-up truck, but it is one damned fine engine. I recently had the chance to try the same engine in the Jeep Grand Cherokee and my opinion hasn’t changed. This engine is the one to get out of all the engines. Full-stop. It’s a 3.0 litre V6 rated at 240 horsepower and 420 pound feet of torque. The end result is more than adequate power to get this heavy beast off the line and low-end torque kicks in early at around 2,000 RPM. What makes this engine even better is the fact that it is married to an equally brilliant 8-speed automatic. These two go together in like camp fires and marsh mellows do. My only complaint is that the diesel is quite noisy at idle from the outside, but much of that noise doesn’t transfer into the interior. But shift are quick and they occur when they are expected to. 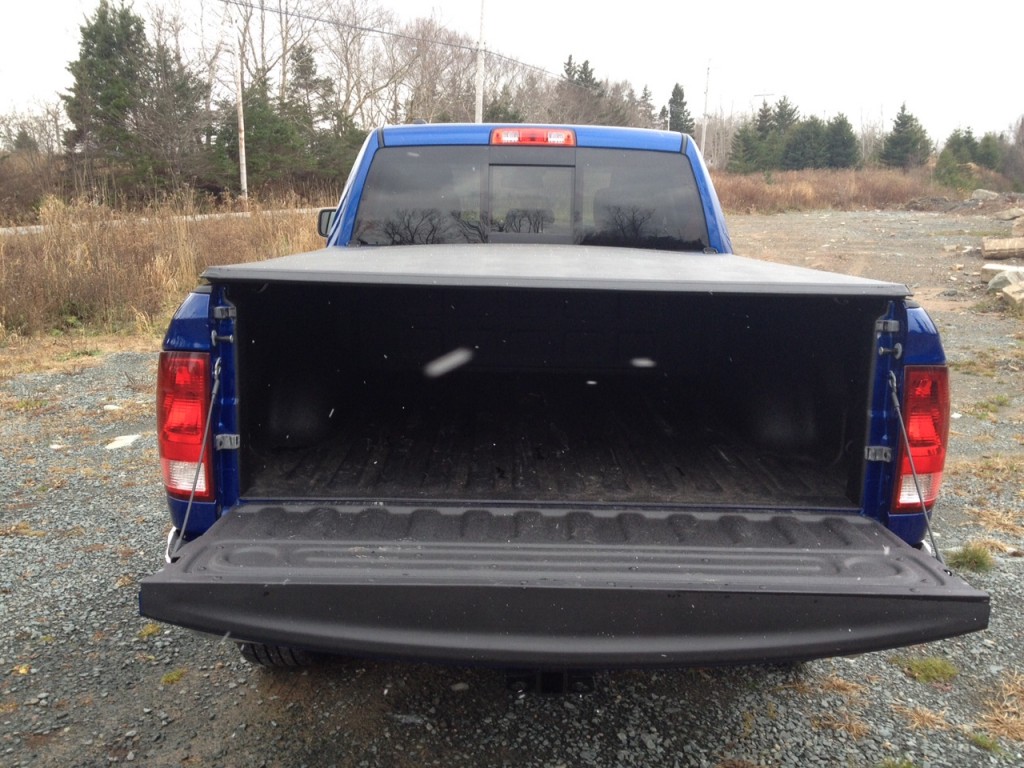 As a result, driving the Ram on the road, particularly on the highway, is a breeze. The only thing missing is Chrysler’s air suspension, which would have automatically lowered the Ram’s height on the highway, making it more aerodynamic and even quieter. It’s well worth checking off this option when at your dealer as it also helps out with hardcore off-roading. Still, the regular suspension set up did just fine in handling bumps and imperfections in the road and I did end up doing some off-roading to which the Ram did not stumble once. Steering feedback is actually quite good, and handling is about what you’d expect from a half-tonne truck. 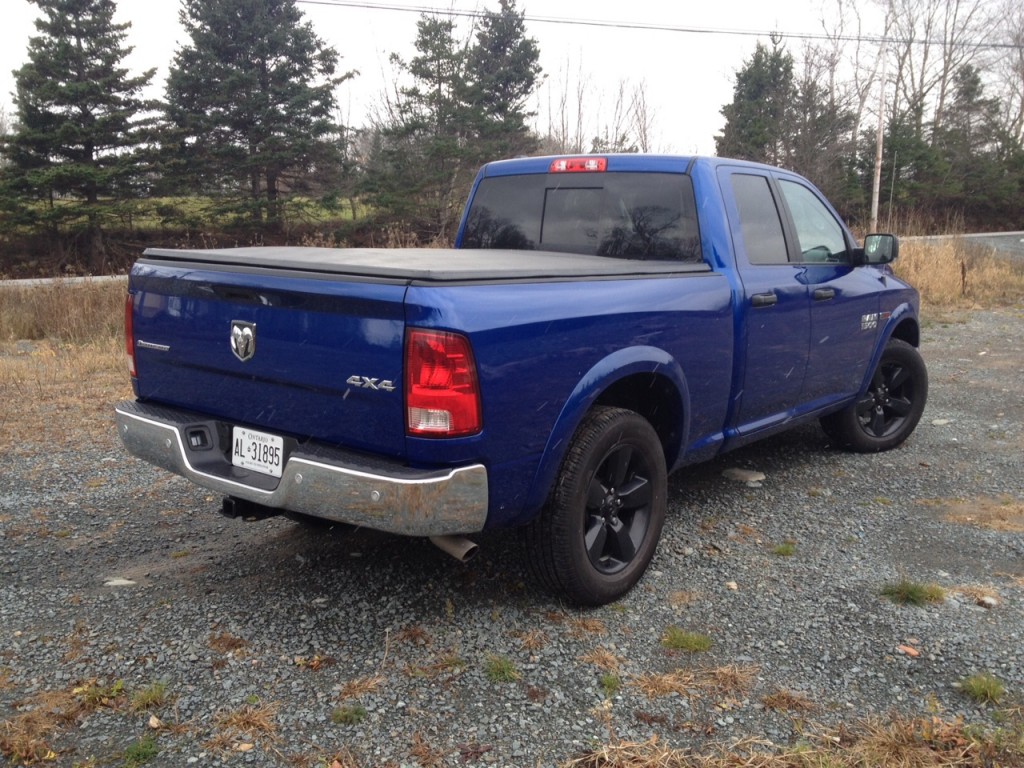 In the Grand Cherokee I was able to return 9.0 L/100 kms in mixed highway and city driving which is phenomenal for a vehicle that size, it even puts some mid-sized cars to shame. But this time around, aside from seeing how it did on the highway once, I decided to drive the Ram just around town running small errands here and there, the way a lot of truck owners do today as they use half-tonnes as their daily drivers. I turned out 12.3 L/100 kms. The official rating is 12.1 L/100 kms city and 8.8 L/100 kms highway. So it wasn’t far off from it’s official rating and a half tonne getting in the 12-range in just city driving is relatively great fuel efficiency. I’ll say it again, this is a tremendous engine. 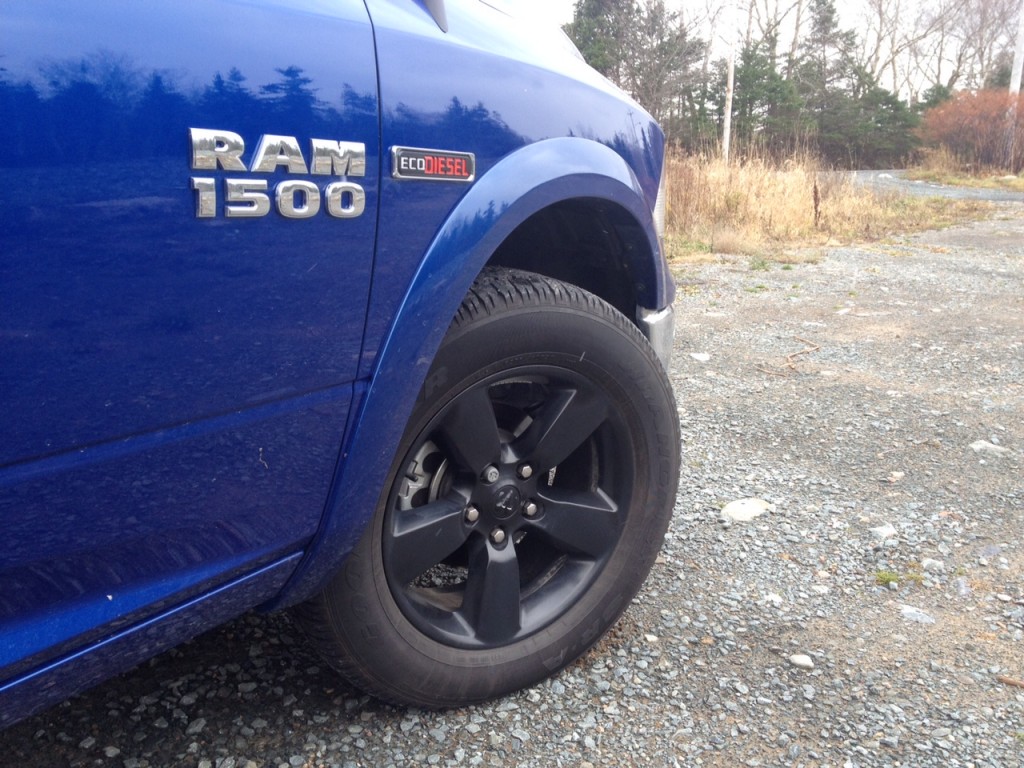 But there’s only one problem with it, and it’s a big one. Actually it would be more accurate to say it’s an expensive one. If you want the Ecodiesel FCA kindly asks you for $5,000 extra for it since they consider it to be a premium engine, and to be honest it’s hard to argue agains that. But that buys a lot of gas if you decide to go with the regular 3.7 litre V6. What I would do is purchase a demo or slightly used version to off-set that initial cost. And I would also add the air suspension, side steps, black wheels and tonneau cover (assuming I’ve since figured out how to take it off). Wait, am I really talking about how I’d spec out a pick-up? You see? There’s just something about pick-ups that are appealing. I found myself liking the Ram more and more by week’s end. But then, all I had to do was take a drive in my personal performance car to snap myself out of it. If you have the itch for a truck though, take a long hard look at this one. 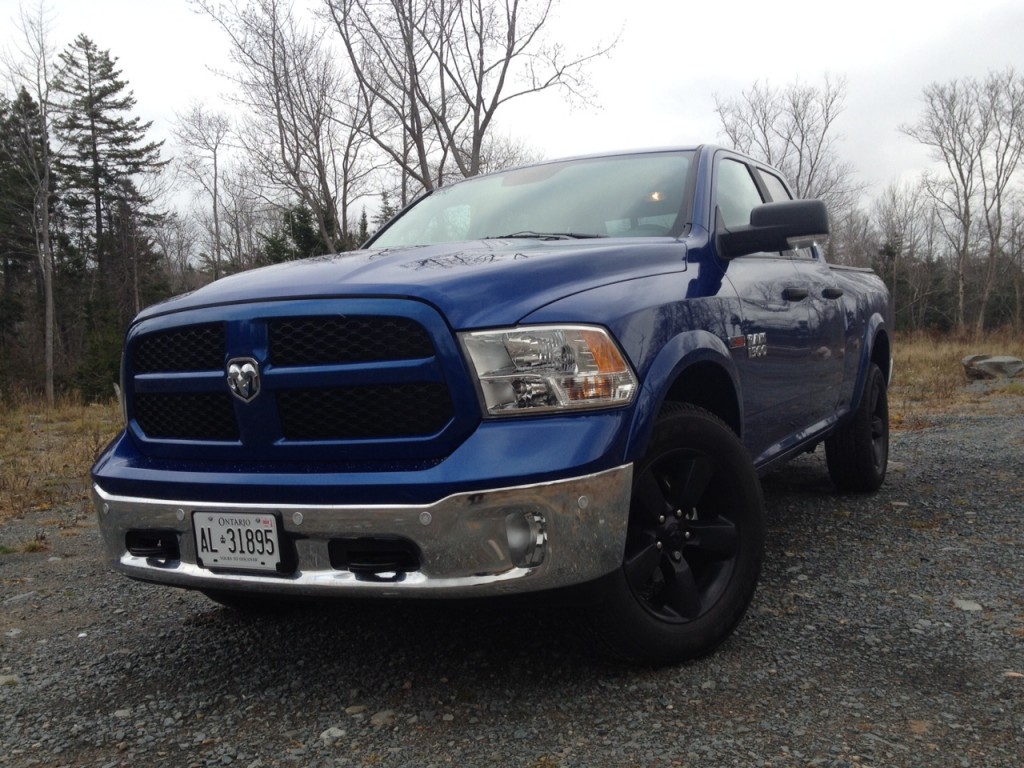