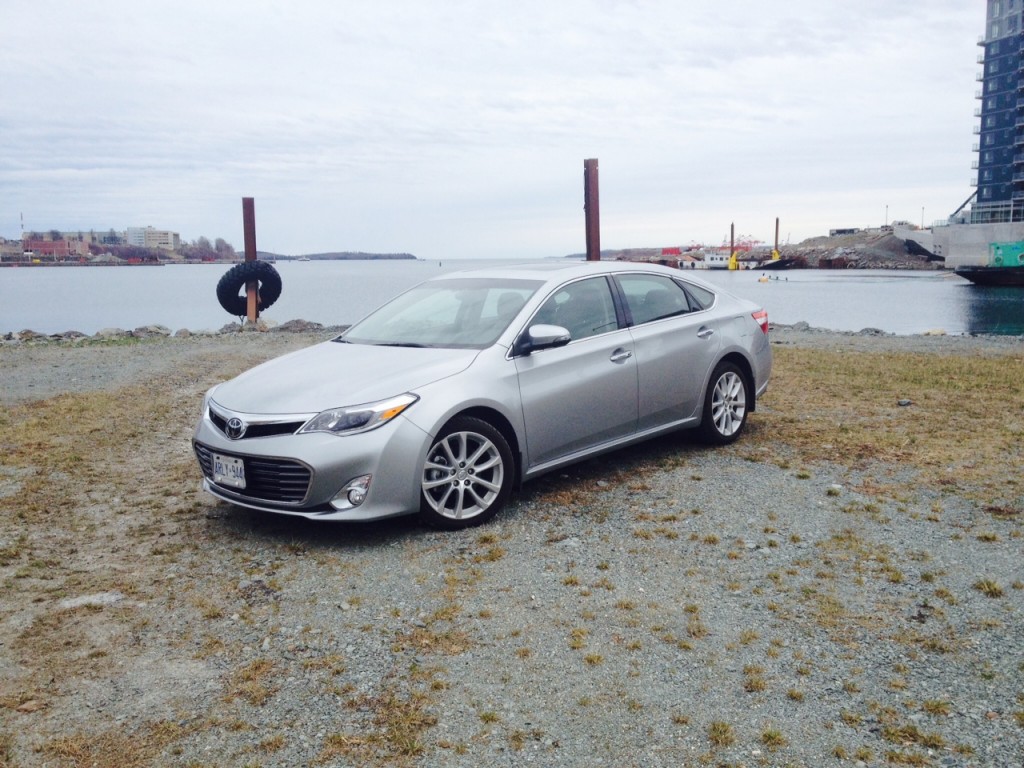 I almost guarantee any review you read about the current generation full-sized offering Toyota will mention something to do with the fact that it’s borderline Lexus-like which, for obvious reasons, is not a bad thing.

You’ll then read on about how the justification to pay the 5K premium for the Lexus ES over the Avalon is minimal and that the Avalon is a value buy as a result.

I’m not going to dispute any of those claims, as I tend to agree.

However, not often talked about in this segment is performance and the reason why can be chalked up to the sheer size of the players within the segment. They’re all quite huge and huge cars tend to be heavy. They also tend to handle corners like a sloth.

And that’s where I think Toyota has found a bit of a new angle. 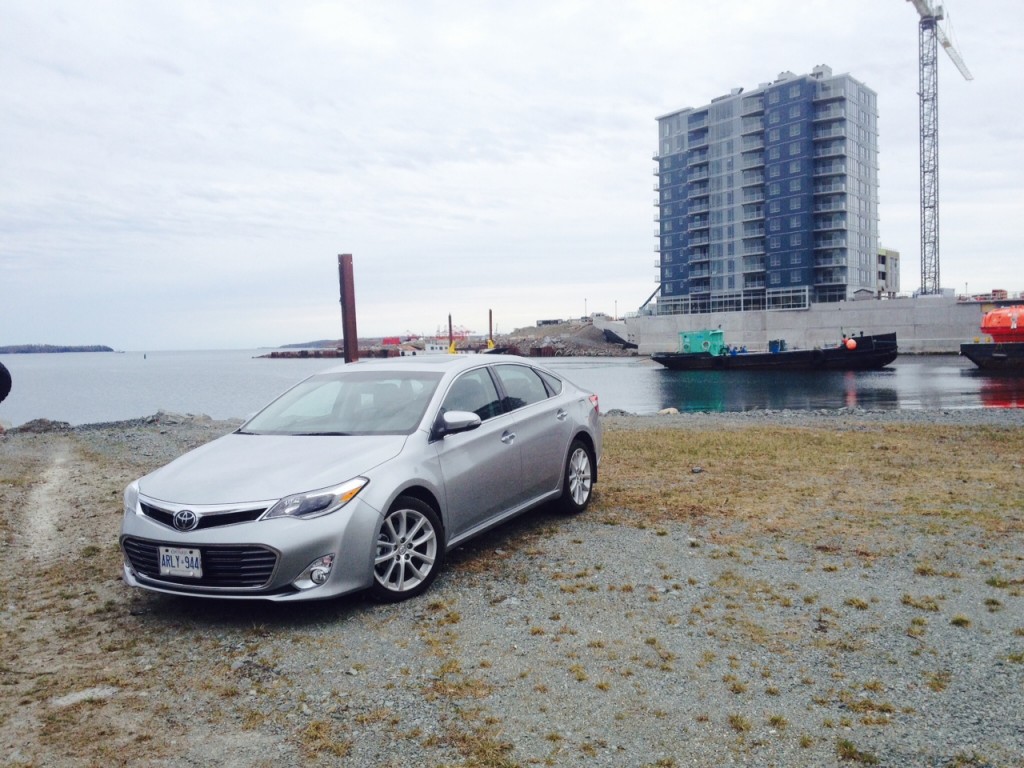 But before I get to that, let’s talk about some more angles, specifically the ones associated with the car’s exterior design. If we look at its immediate competitors there’s a bit of a problem. The Chevy Impala, while having a recent redesign that is kilometers ahead of the old design, can look awkward from certain angles. The Taurus from Ford is getting long in the tooth. The Chrysler 300 recently had a refresh but it’s still a design that we’ve all become accustomed to, to the point where 300′s now go unnoticed in a sea of traffic. And the Maxima’s design is seven years old. Yes, there is a new Maxima which will come out later this year but its design will definitely be polarizing to some. 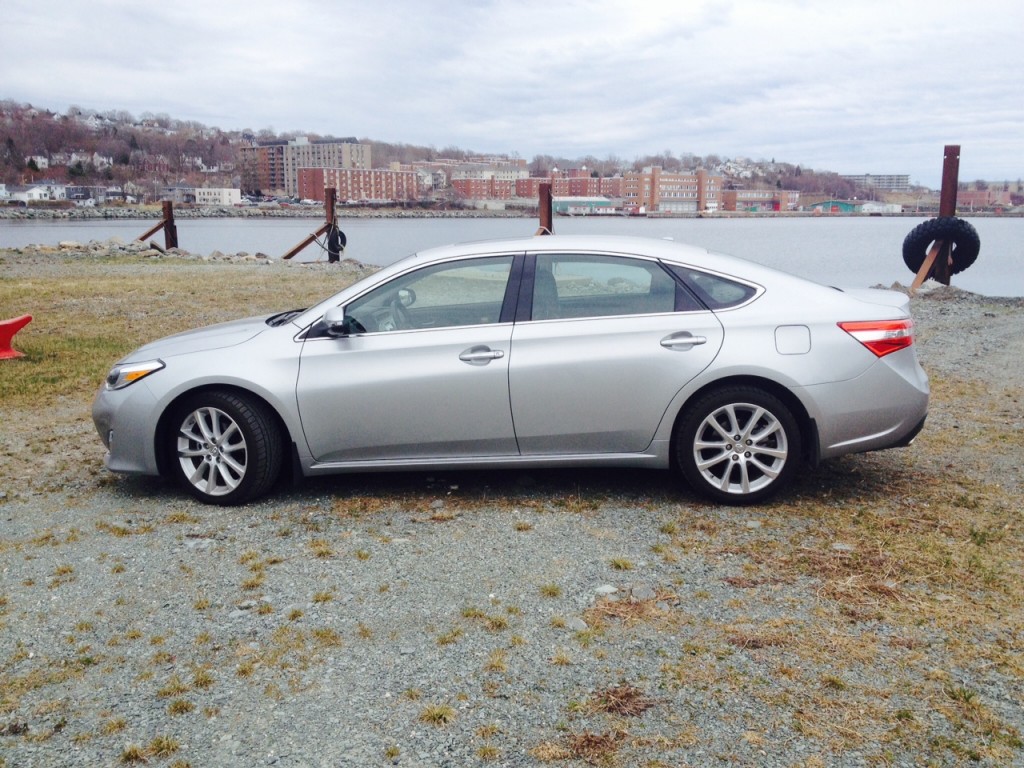 That leaves the Avalon in fairly good shape. Aside from the fact that its design is likely the most tame of the bunch, it is still, in this author’s view, the cleanest design of the bunch. It won’t turn heads, but it also won’t necessarily go unnoticed either. The sleek profile is reminiscent of the growing popularity of the four-door coupe design, however it doesn’t fall in the same trap of style over function. The long and thin LED tail and brake lights help complete the look while the 18-inch alloys with a unique finish on the Limited trims still let you know that this car is born to be premium. Up front there are unique LED headlights, however you do not get matching LED turn signals like you would with most premium German brands. Overall the look works and it works well. 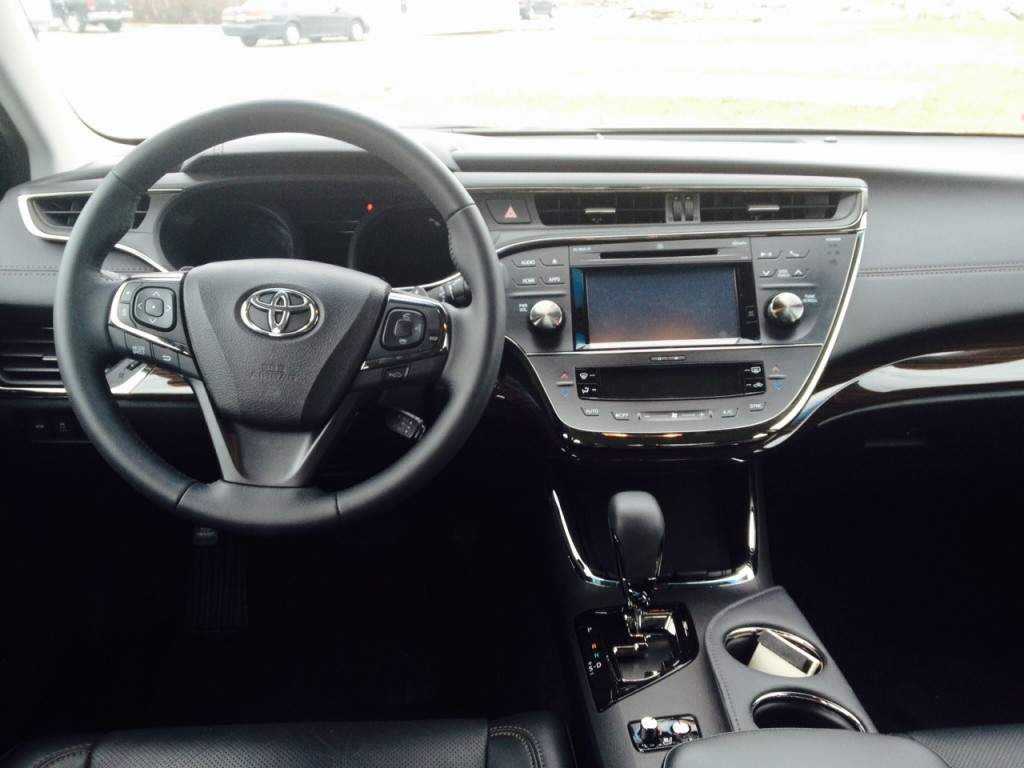 Inside you’ll be greeted by a Lexus-like cabin, it’s not just a typical tarted up Toyota interior. The Avalon gets its own unique flat-dashboard layout which feels of high quality. In fact, very few trims and bits feel cheap. The leather stitching on the dash is a nice touch. Normally I would criticize a car for doing away with traditional buttons in favour of touch buttons for almost every control. Unlike other touch buttons however, the Avalon’s button’s respond to commands 95% of the time. One other nice touch is the controls for the heated and cooled seats which, when pushed, pop up to reveal a dial. Left for cooled seats and right for heated seats. It’s an intuitive design that helps the Avalon retain its premium credentials. 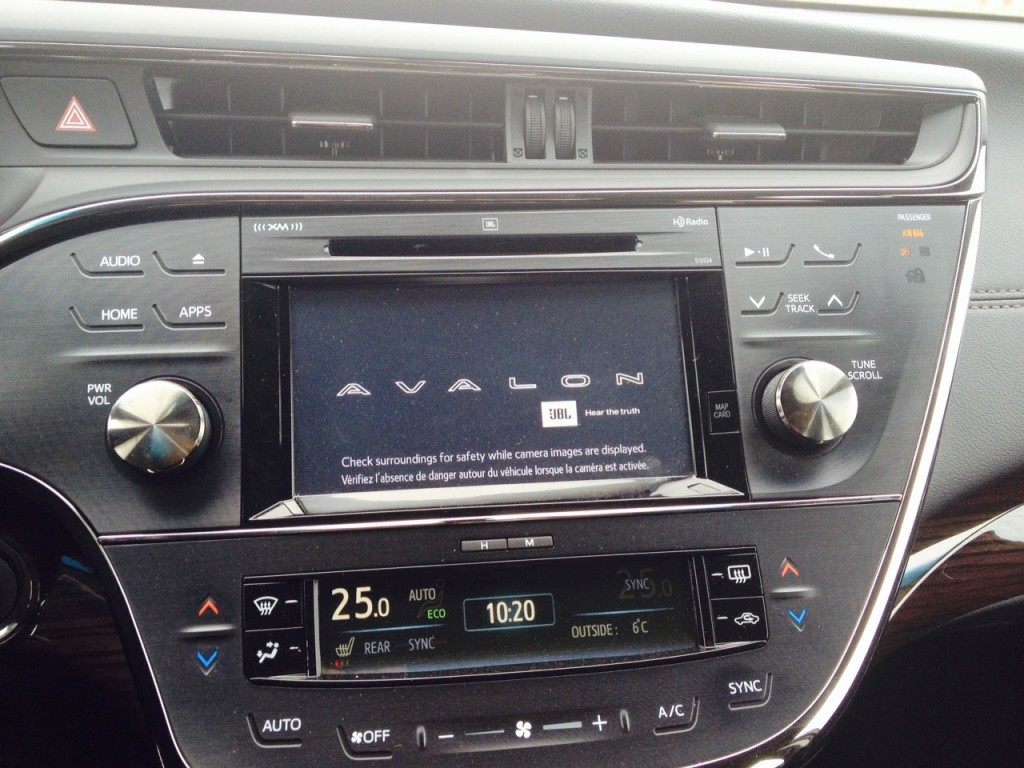 The seats are generally comfortable however there is little lumbar support and side bolstering. The rear passengers get treated to comfortable seats with oodles of leg and head room. On top of that, rear passengers can control their own climate and have access to two-stage heated seats. There are no cooled seats offered, however. The friend relegated to the centre seat likely won’t find it too bad. There is adequate headroom and with a small centre hump. The good news continues in the trunk where its sizeable dimensions easily beat out those of the Buick LaCrosse. 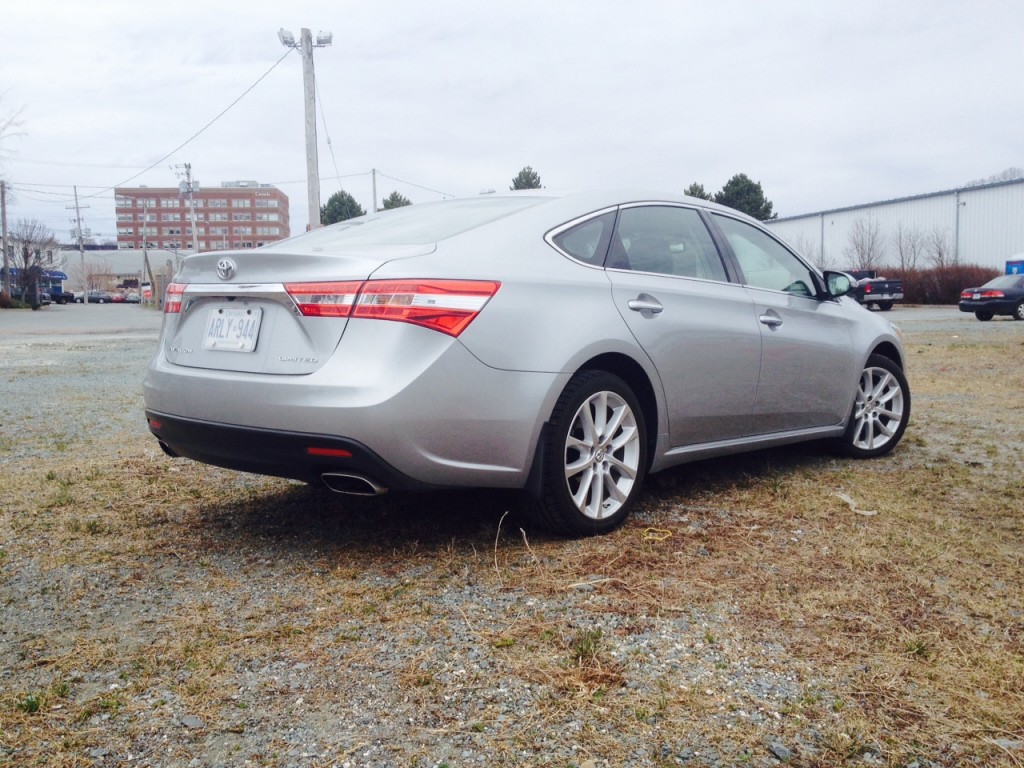 Power is delivered by a 3.5 litre V6 which produces 268 horsepower and 248 pounds foot torque. If those numbers sound familiar, that’s because it’s the same unit found in V6 equipped Camry’s and that’s very much a good thing. While this engine won’t leave you wanting more, it does not disappoint either. Power is strong and the six-speed automatic rows through gears in a smooth manner. It’s composed and drives the way you’d expect a big front-wheel car to drive, however that isn’t to say that it is overly cushy. When you put your right foot down, the Avalon responds briskly with only a small hint of torque steer. 0-100 times have the Avalon pegged at just under 6.3 seconds – a fairly impressive number given the Avalon’s overall size. Unfortunately the Avalon is let down by poor brake feel. 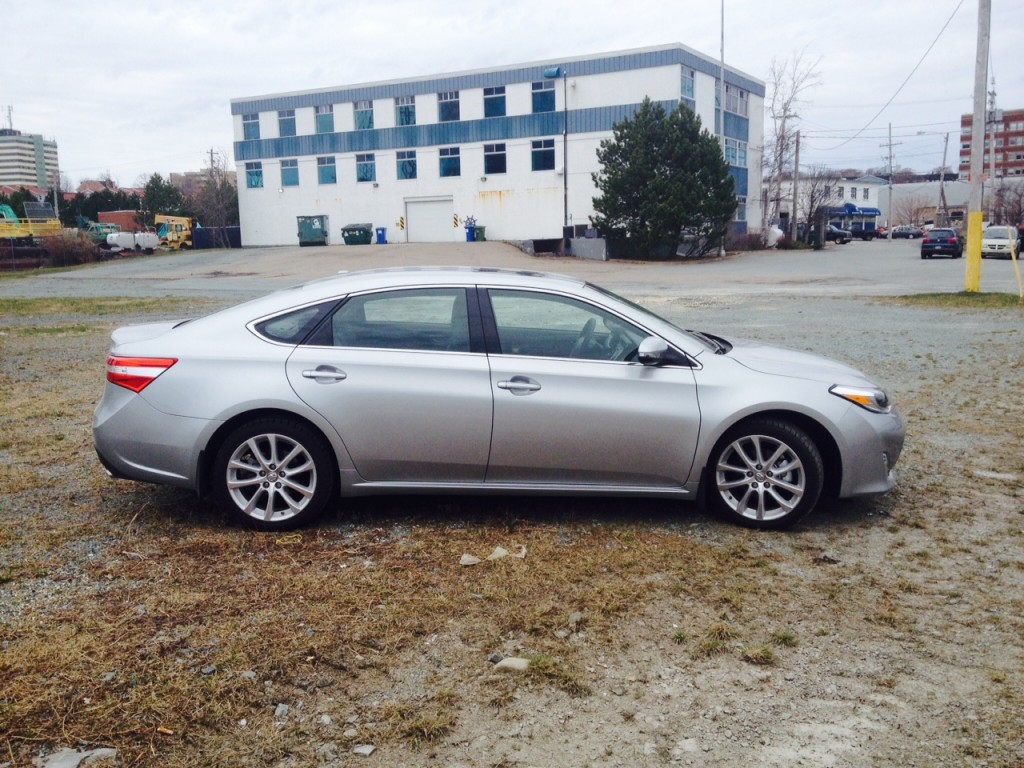 But what I was alluding to earlier in this review is what happens when you hit the sport button. This wakes up both the throttle and the transmission for a more spirited drive. I’m not suggesting by any means that the Avalon is a good handler, in fact I’d wager that the Chrysler 300S would put it to shame, but its driving dynamics did surprise me in a good way. And perhaps the most compelling part is that it is definitely a sharper handler than the Lexus ES and that’s partially due to the fact that it has wider tires and width overall. 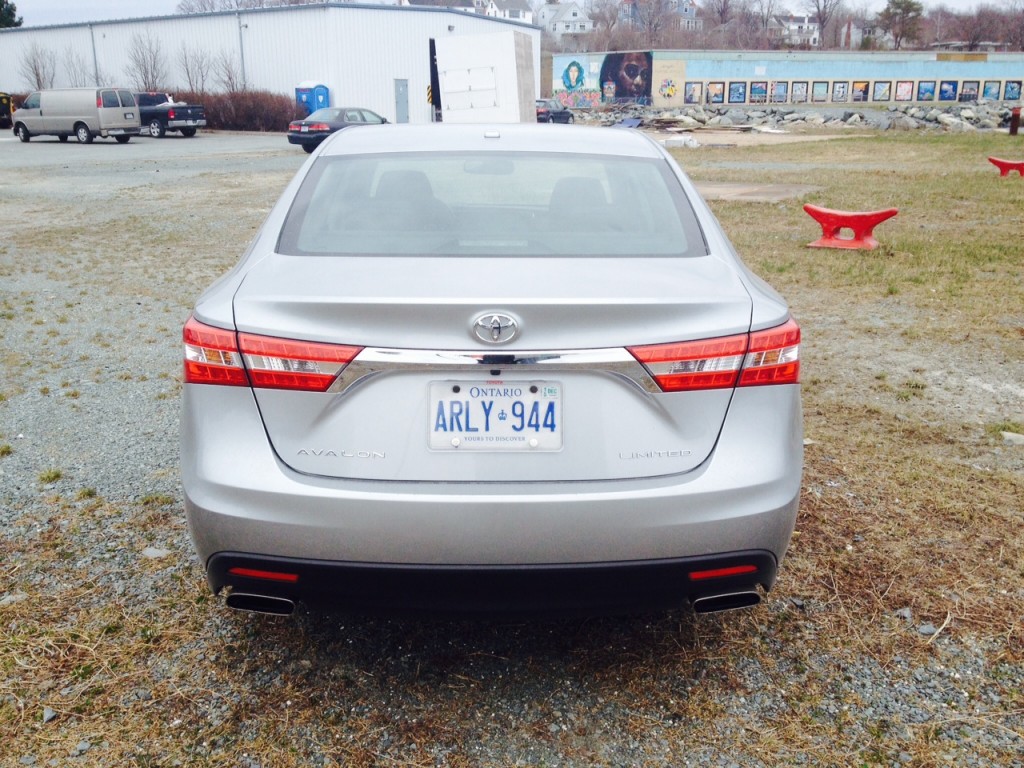 The Avalon also has an eco mode should fuel savings be a primary concern. Our American friends are offered a hybrid version of the Avalon while us Canucks are stuck with the regular internal combustion engine. Still, the Avalon has some decent fuel consumption numbers on paper; 11.3 L/100 kms in the city and 7.5 L/100 kms highway. I returned 9.3 L/100 kms in mixed driving. 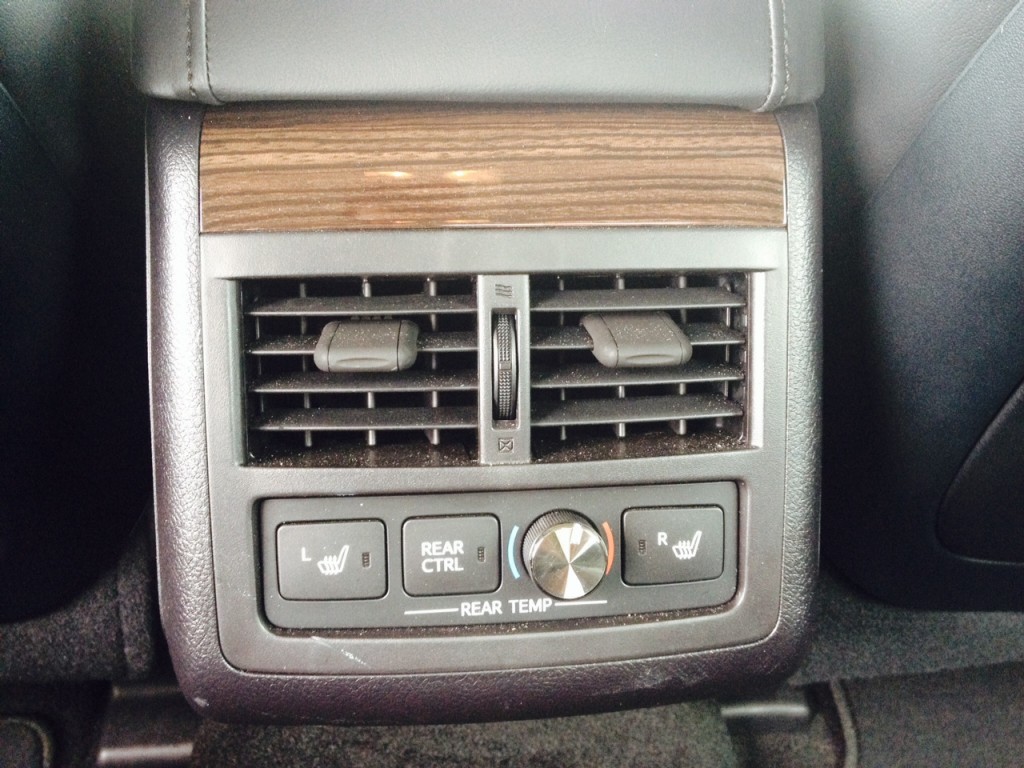 But going back to the performance aspect, I must say, this is something that all but puts the Avalon ahead of the Lexus ES. You get a better looking car, more space, the same amount of luxury and a better overall performer. In terms of its more immediate competition, the Avalon holds its own very well. The 300S and new Maxima could likely run circles around it, however in my opinion the Avalon is the most well rounded of the bunch offering different driving dynamics depending on the roads and mood of the driver. 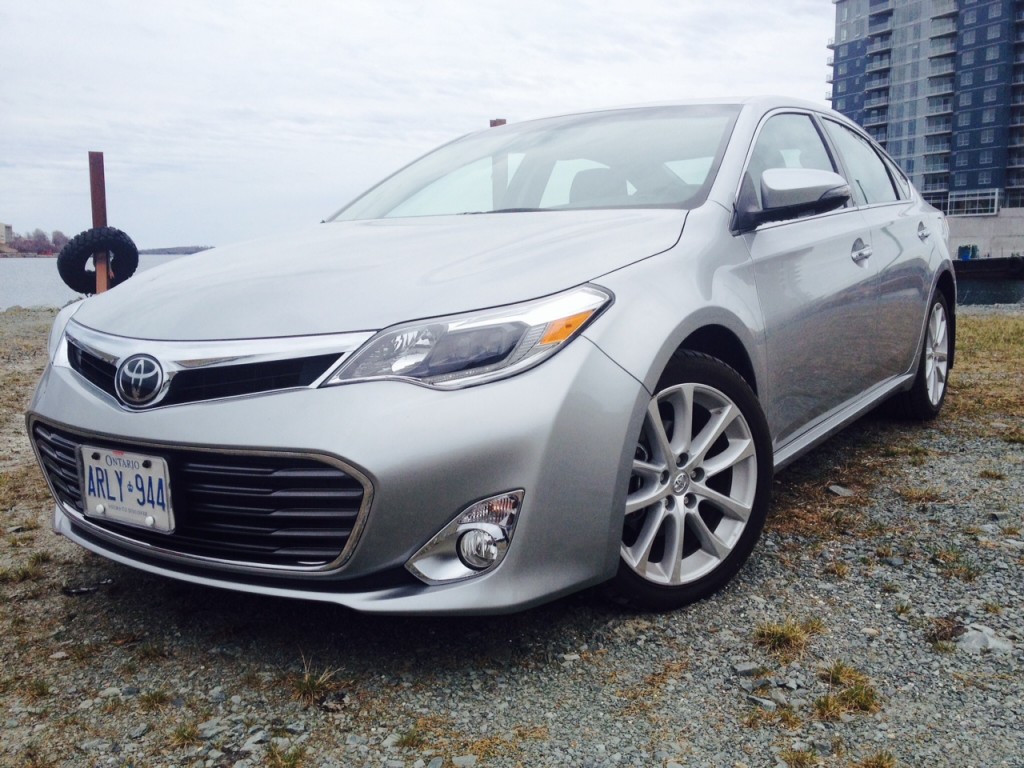 The sad thing is, most Canadians likely won’t buy it. Full-sized cars are not the priority they once were for us and that’s a shame because the Avalon is one of Toyota’s better efforts.