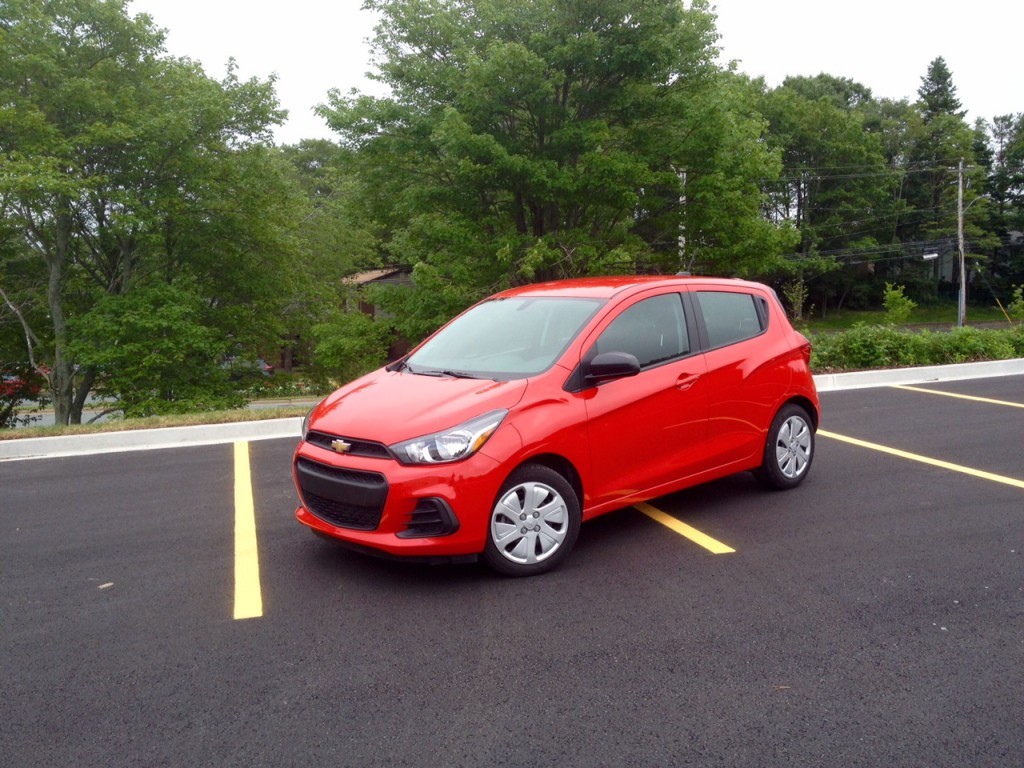 If you are an avid reader, you may have noticed that the press vehicles I receive aren’t typical of what people actually buy. They’re usually top trim models fitted with every option available. I usually list the base price and the price as tested for every review just so the reader can see how quickly options can get out of hand. Very few people actually buy a car that is loaded to the nines.

The reason why manufacturers deck out their press vehicles is, of course, an effort to sway the reviewer into a positive article. They think we were be wooed by all the fancy gizmos, tech and upgraded style. In some instances, we are. But a lot of the time, our first thought is “it’s nice, but how much does all this stuff add to the price and is it actually worth it?”

So, it is absolutely refreshing to have spent some time with the cheapest new car you can buy in Canada, the Spark; in base trim with absolutely no options on it. What you see is what you get.

I’m taking manual door locks, manual roll up and down windows, a manual transmission and more. Or, uh, less.

So, what do you actually get for a new car that is five bucks short of 10 grand and is it worth it? 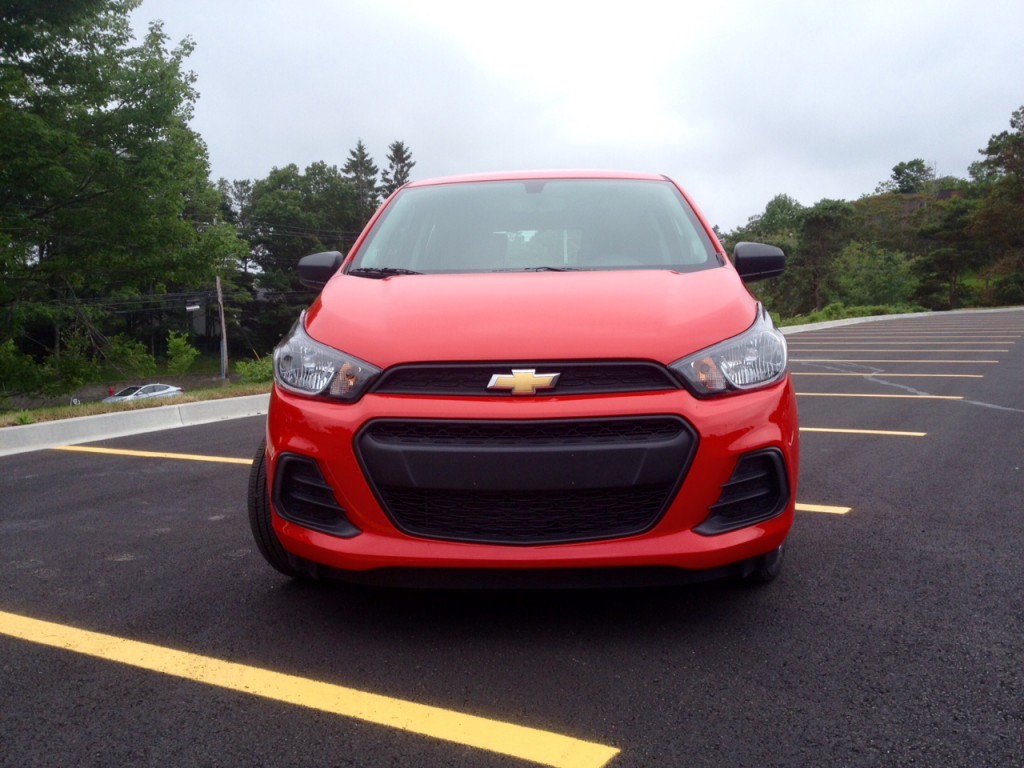 Chevrolet has done a fairly good job at redesigning the new Spark. It is a lot less cartoonish than the previous generation and as such, is a lot less embarrassing to be seen in. While I will admit, the bright red paint seems a bit out of place on a car of this segment, the lines are decided more grown up with a front face that could even be described as aggressive along with 15-inch wheels with hubcaps that don’t look overly dorky and a tail light design that isn’t trying too hard.

Of course, if you opt for higher trim models you can get a few styling upgrades, but overall the look is fairly agreeable even in base form.

But considering how small this car actually is, which makes its design a bit more confined, buyers will likely prefer it to the perhaps nerdy looks of the Nissan Micra or the Toyota Yaris hatchback. 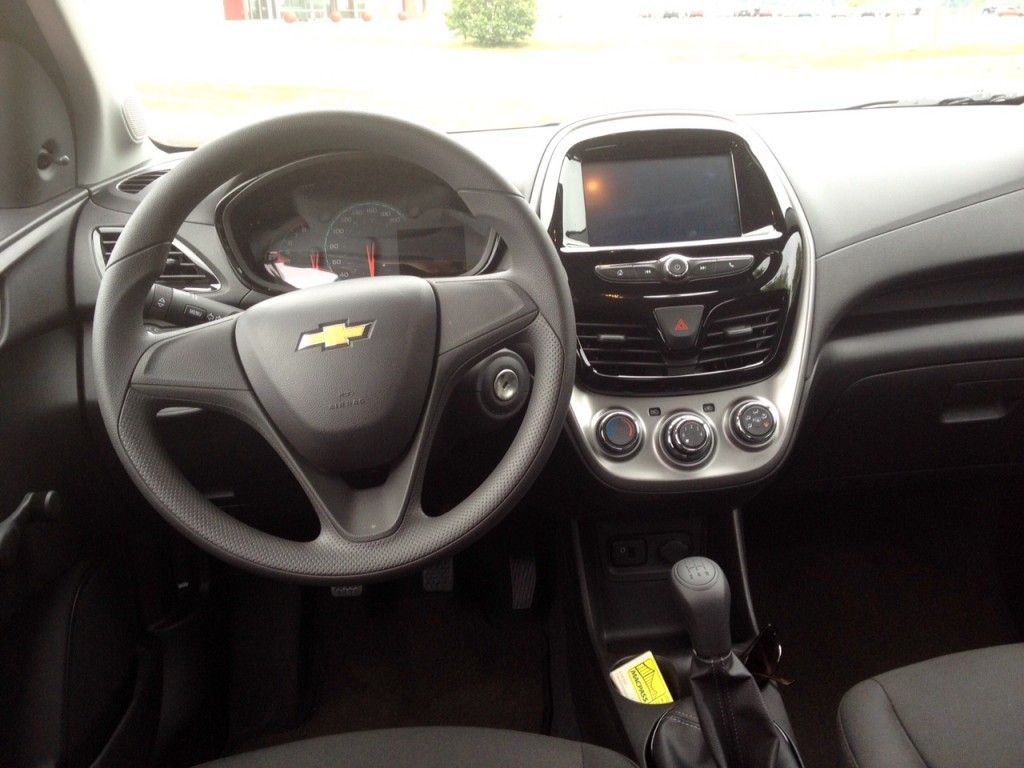 Inside is where most people will be a bit surprised. It’s actually fairly nice, relative to its price point. There is a touch screen – yes a touch screen – standard. This is where you’ll access, among other things, the standard 4G LTE built-in wireless. It also gives you a three month trial of On-star navigation. Again, given its infamous title of cheapest car in Canada, that is a fairly impressive standard feature. Also impressive standard features include a back-up camera and automatic headlights.

The quality of materials obviously do not rival the likes of Audi, but they aren’t overly cheap feeling either. In fact, the seats –while the design pattern is a bit tacky for my liking – are decent on the comfort scale.

The Spark is not only a short car, but a narrow one too. This means you’ll likely be sharing some of your personal space with your passenger, but it isn’t a claustrophobic feeling.  The back seat can fit two, but really only if they are small-ish in stature. 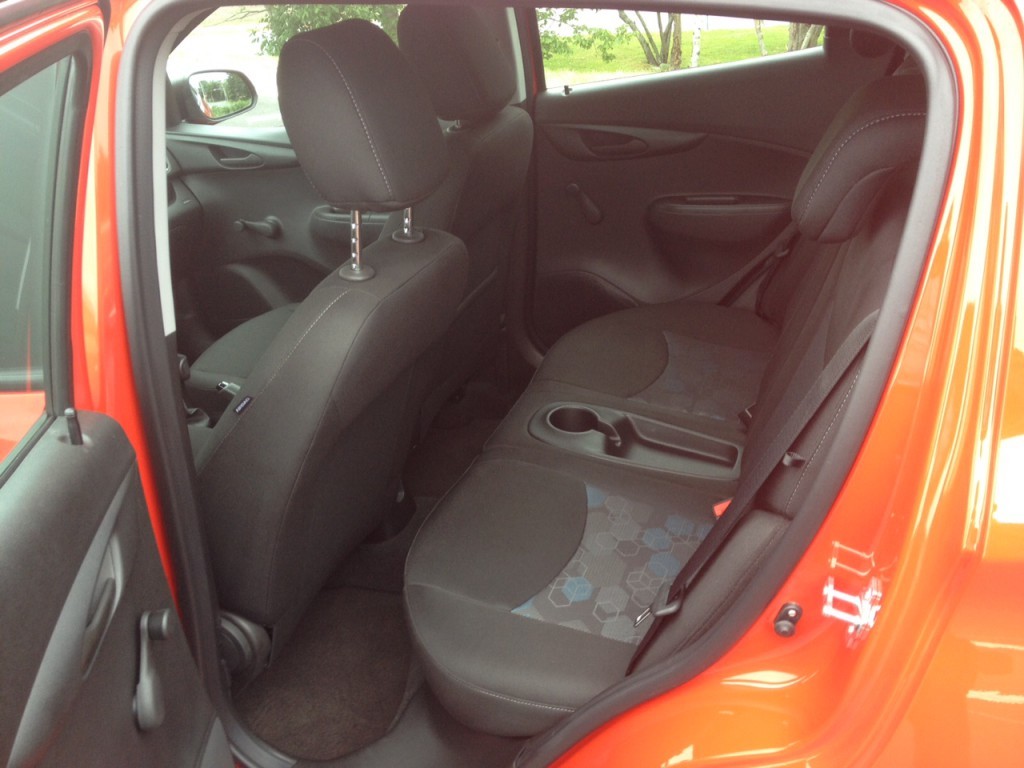 Trunk space is adequate for a few grocery bags or an overnight bag but that’s about it. The rear seats do fold to offer more space, but given the lack of interior space in general, they need to fold rather unconventionally by flipping the lower seat cushions forward first. This operation really reminds you that you did indeed purchase the cheapest car in Canada.

This would be an adequate car for one person or perhaps a couple to use, but if you have a family you’ll find yourself wanting for more space more often than not. 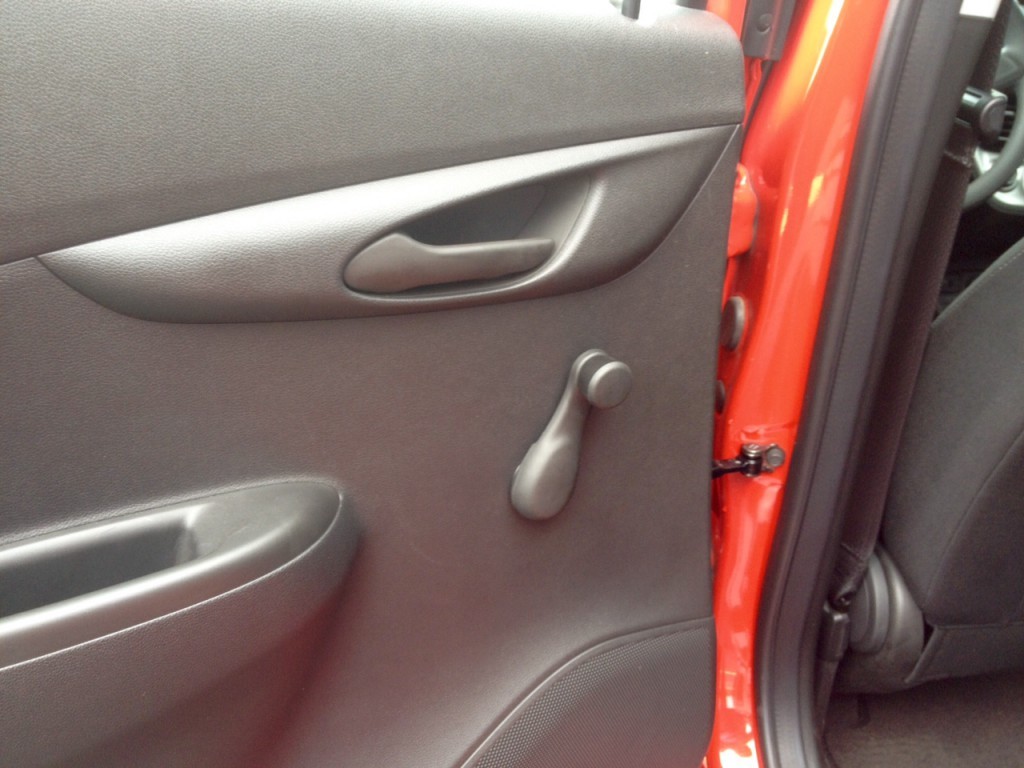 Just to clarify, the Spark is not an electric car or a hybrid. Most people who saw it asked if it was due to its name. Although GM did make an all-electric version of the previous generation, it is a primarily just a gas engine vehicle. GM may want to rethink the naming strategy on this one as it had most people confused.

The Spark comes with one engine option and it’s a 1.4 litre 4-cylinder which produces 98 horsepower and 94 pound feet of torque. Before you start rolling your eyes, remember the Spark isn’t a big or heavy car so it doesn’t necessarily need triple digit horsepower numbers.  On top of that, those numbers are actually an increase in power over the previous generation. 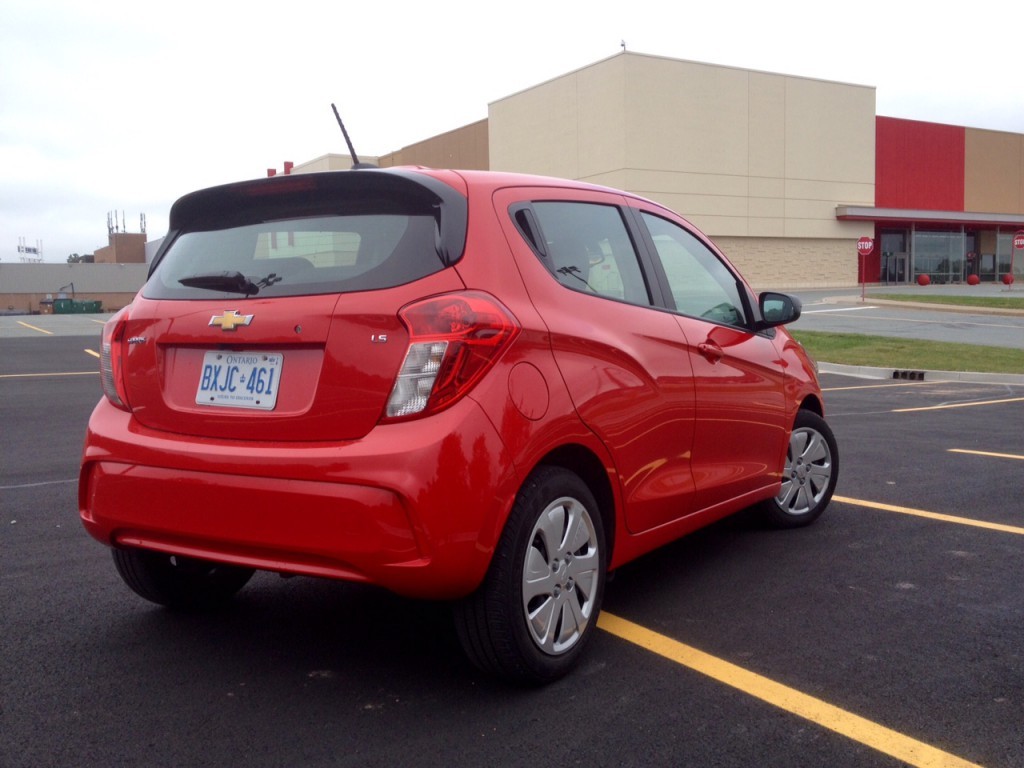 You get your choice of a five-speed manual or a CVT. Here is where the dilemma comes in.

If you have a soul, you know that CVT’s are pretty much the devil. They are soul-sucking, whiny, unrefined little things whose main goal in life is to make sure you don’t have any fun ever again behind the wheel. All they care about is squeezing that extra drop of gas out to make you go further. So, go for the manual then, right? Well, ordinarily I’d say yes hands down. But the manual, while it is able to help get the most out of the little engine, is rubbery feeling and the throws between gears are about as long as a football field.  It’s difficult to select the correct gate as there is little feel to where the stick actually is at any given time. So the question is, do you want a soul sucking transmission that robs power yet may save you a bit of gas, or a transmission that gives you more out of the engine, but you find difficult to operate half the time. I’ll let you decide that one on your own – but obviously neither seems ideal. 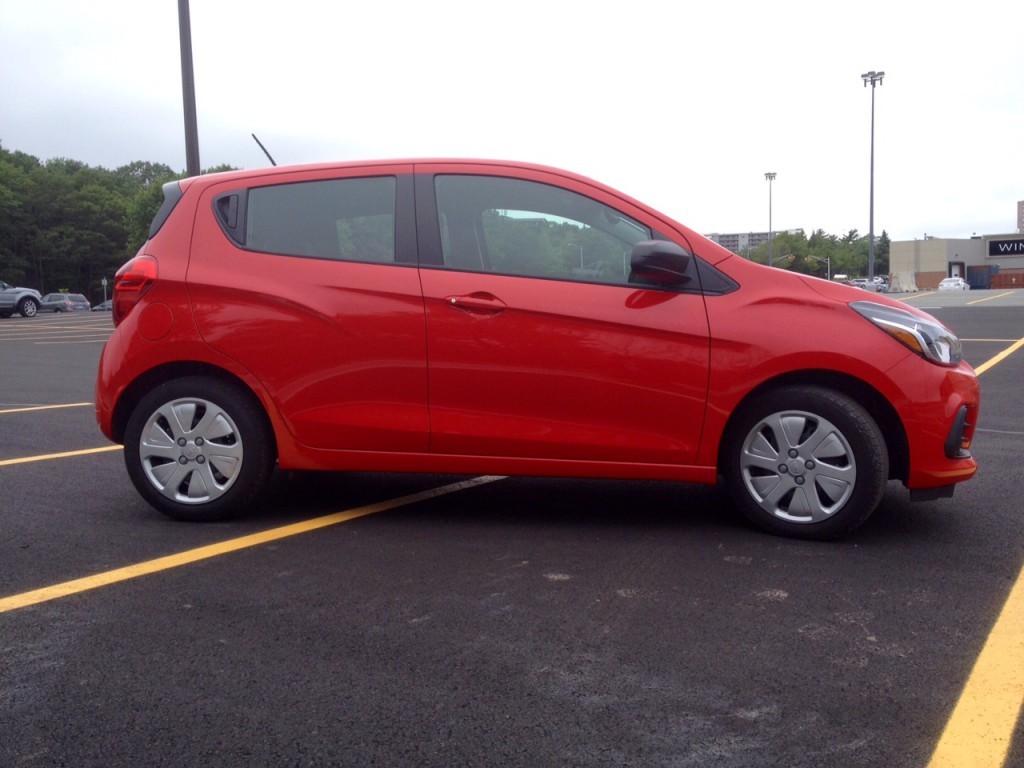 Around town, the Spark feels at its best. It is able to zip in and out through traffic with relative comfort and ease, though it should be said that low end power is almost non-existent. Once you do get up into the power band though, it feels rather peppy.

But don’t mistake peppy for sporty. The Spark has plenty of body roll, brake fade and nose diving abilities that will easily get it out of sorts quickly. Combine it with that difficult transmission and you’ll definitely want to make sure you haven’t eaten large amounts of sushi beforehand. It may be difficult to resist the Spark’s easy ability to squeal the tires, but it is best left to normal, fuel efficient/comfort oriented driving styles.

On the highway, the Spark doesn’t necessarily lack confidence, but you’ll definitely want to keep both hands on the wheel as cross winds can get it easily out of sorts – not to mention the constant need to downshift to adjust for slower or faster moving vehicles on the highway. Passing, for instance, is something that needs to be thought through well ahead of time. 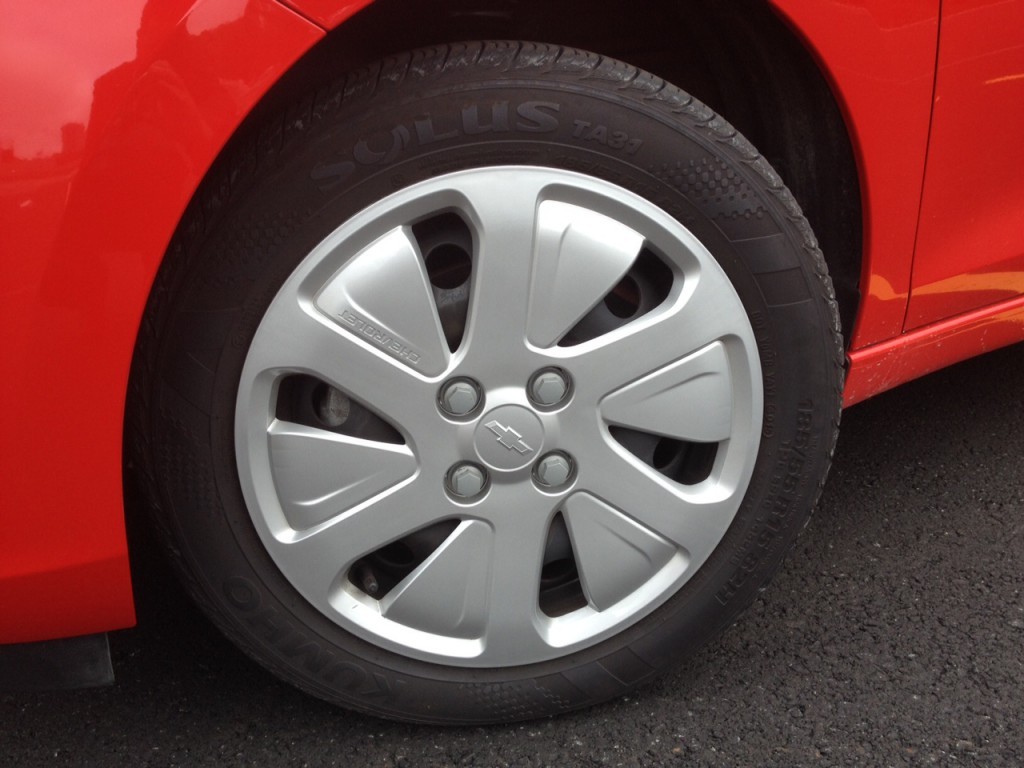 So, a tiny car with a tiny engine must be pretty good on gas, right? Well, sort of. Officially the Spark is rated at 7.8 L/100 kms city and 5.8 highway. On their own, those numbers are pretty awful for a car this size. Happily, however, my real world mixed driving garnered me much better numbers at 6.2 L/100 kms. That’s not bad, however I can’t help but remember the 6.3 L/100 kms average I returned from the Honda Civic Coupe I tested not too long ago. 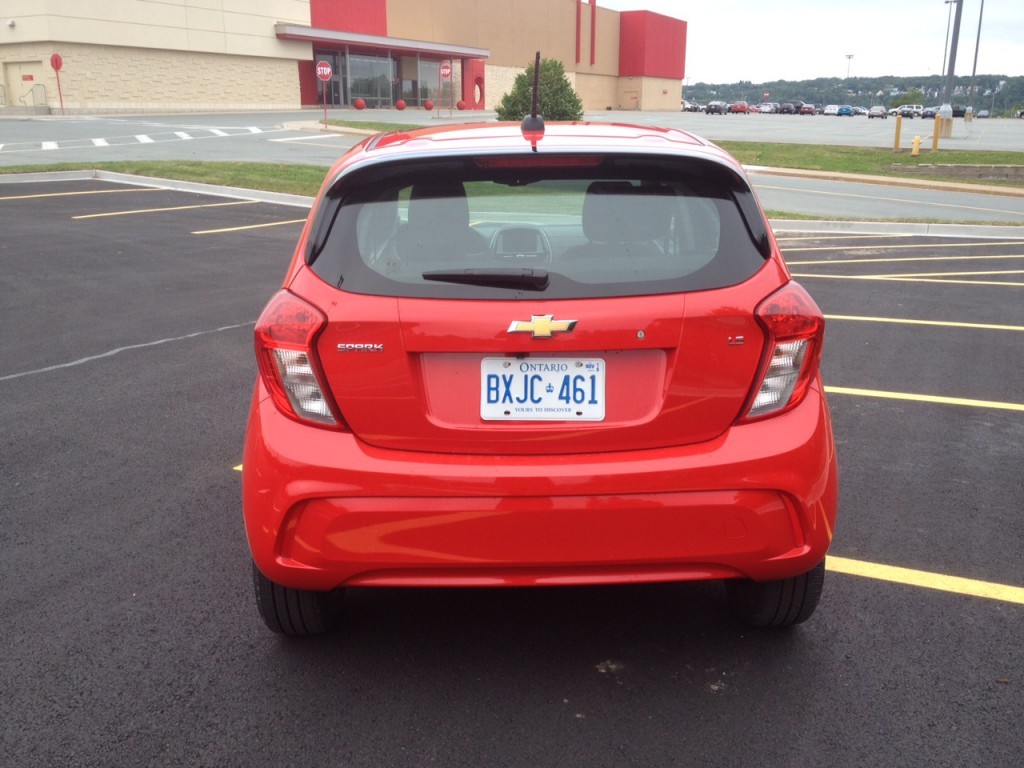 The Spark actually offers a decent amount for its base price and no options. But even still, you’ll want options. Air conditioning, as it turns out, is highly underrated for instance. Like, excessively underrated. And while rolling your windows up and down isn’t really that big of a deal, I could see that getting old very quickly. But the Spark really does make an argument for itself when compared to used vehicles. Most people with only a budget of ten grand tend to head straight for the classifieds.

Yet here we have a brand new car, with a warranty, decent tech standard, not bad on gas with the ability to seat four and is reasonably comfortable. If all you are looking for is to get from point A to point B reliably and cheaply, then the Spark makes at least some measure of sense. 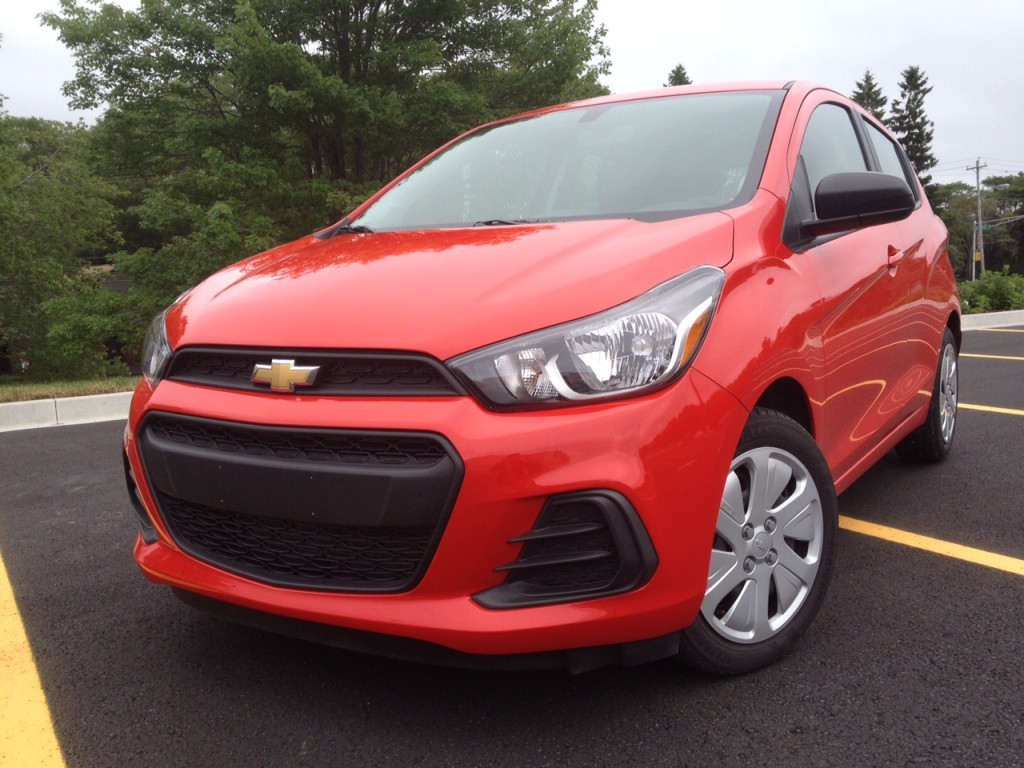