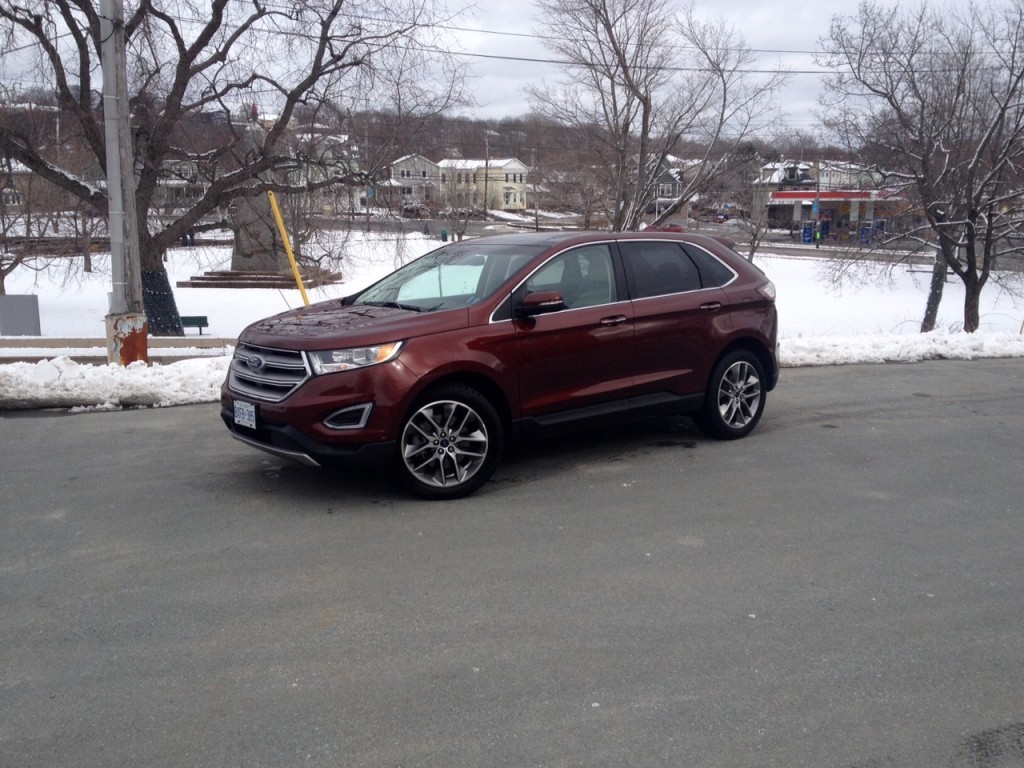 Wait, hasn’t there already been two reviews on the new Ford Edge from cardriven.ca?

Why yes there has, avid reader! You may remember my review of the Edge a few months ago with a 2.0 litre 4-cylinder Ecoboost engine under the bonnet. You may also remember that cardriven.ca contributor, Robert Nichols, had a go in the Edge Sport last month which was equipped with the 2.7 litre Ecoboost V6. So why do another review of the Edge?

With all three engine options reviewed, we can now give you, dear reader, a more pointed verdict on the Edge, specifically, which engine option is the one you should check off when ordering your new Edge. 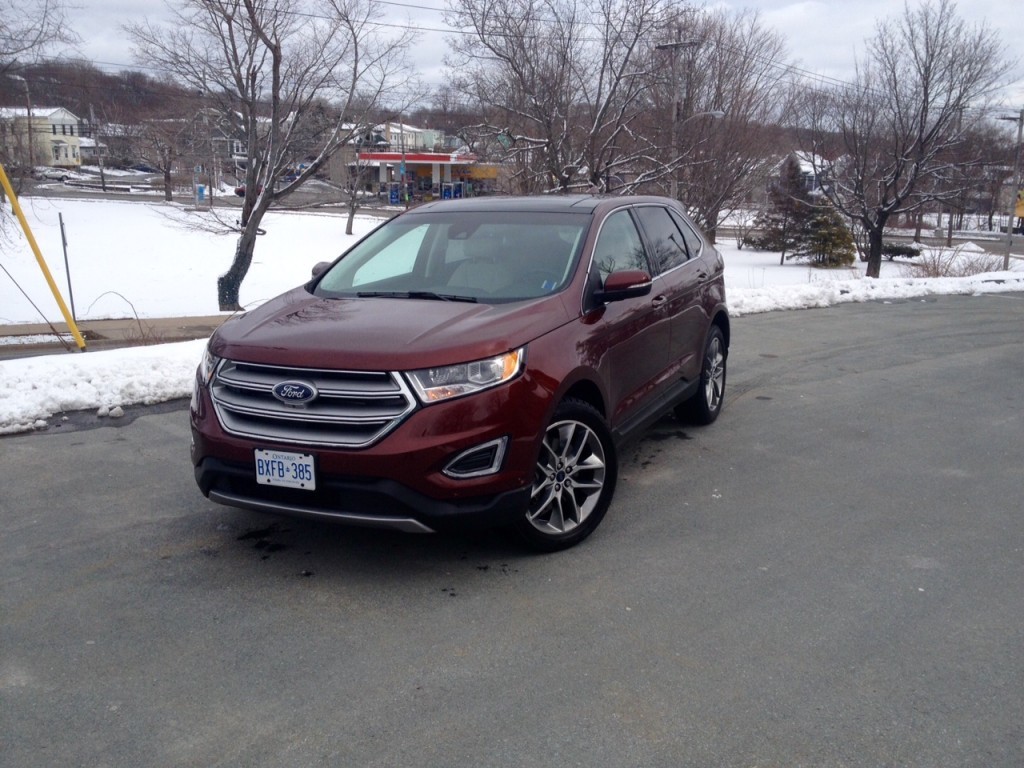 Style-wise, of the three we’ve reviewed, two have been in Titanium trim which nets you HID headlights, LED taillights which span across the tail gate along with amber turn signals. If you remember my 2.0 litre Edge review, you’ll remember me questioning why the higher trims such as the Titanium get amber turn signals while lower trims do not. I admittedly still don’t get it. Otherwise, optional 20-inch rims are available in Titanium trim. The Sport edition gets more aggressive styling along with a reworked grille and black optional rims.

No matter which trim you choose, it’s safe to call the Edge’s styling more of an evolution than anything else, however the look is still handsome and is very recognizable as an Edge. In typical Ford fashion you can add on different visual touches here and there to personalize your Edge. 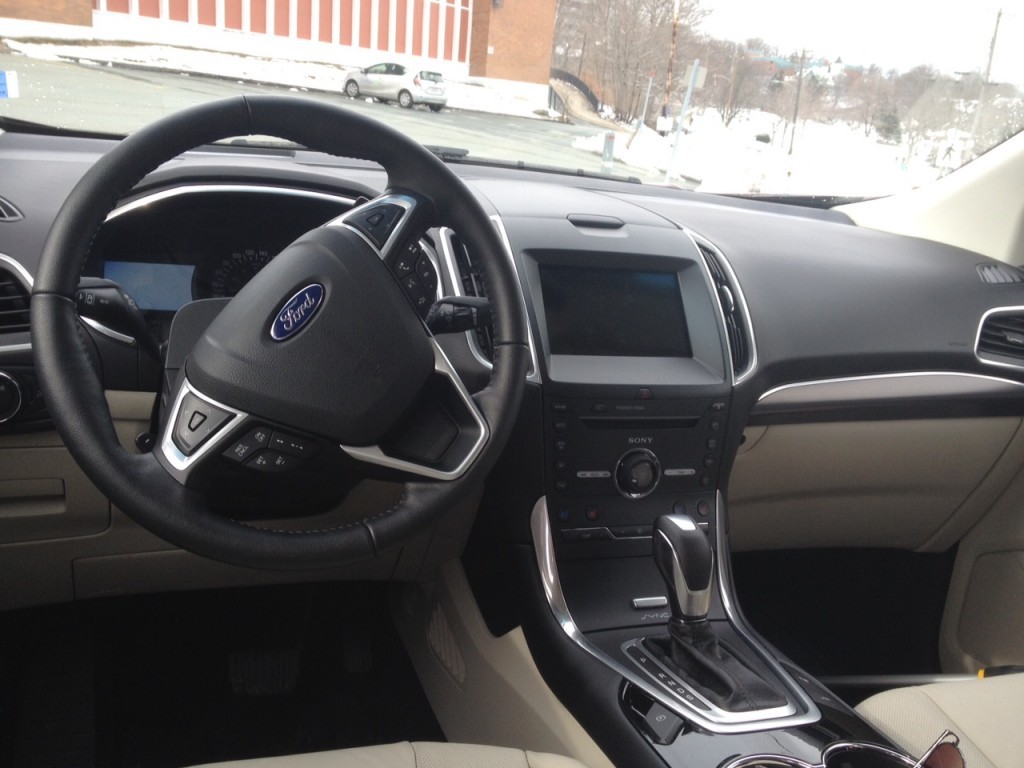 Inside is a very nice place to be. The layout is simple and clean and Ford has given us back traditional buttons in place of the fidgety haptic buttons found in Edges of the past. There is still an infotainment screen and happily, it no longer contains the problematic MyFord Touch system, which was found in the 2.0 litre tester. The new Sync 3 is finally here and not a moment too soon. The system is much more intuitive and easy to use than the old system. It’s visually more appealing as well.  Gone is the four quadrant screen along with the inconsistent responses to command. Now, nine times out of ten, the system will actually do what you want it to. And within that realm you can control everything from the satellite radio to the drive mode settings and yes there is a sport mode, which I’ll get to in a minute. 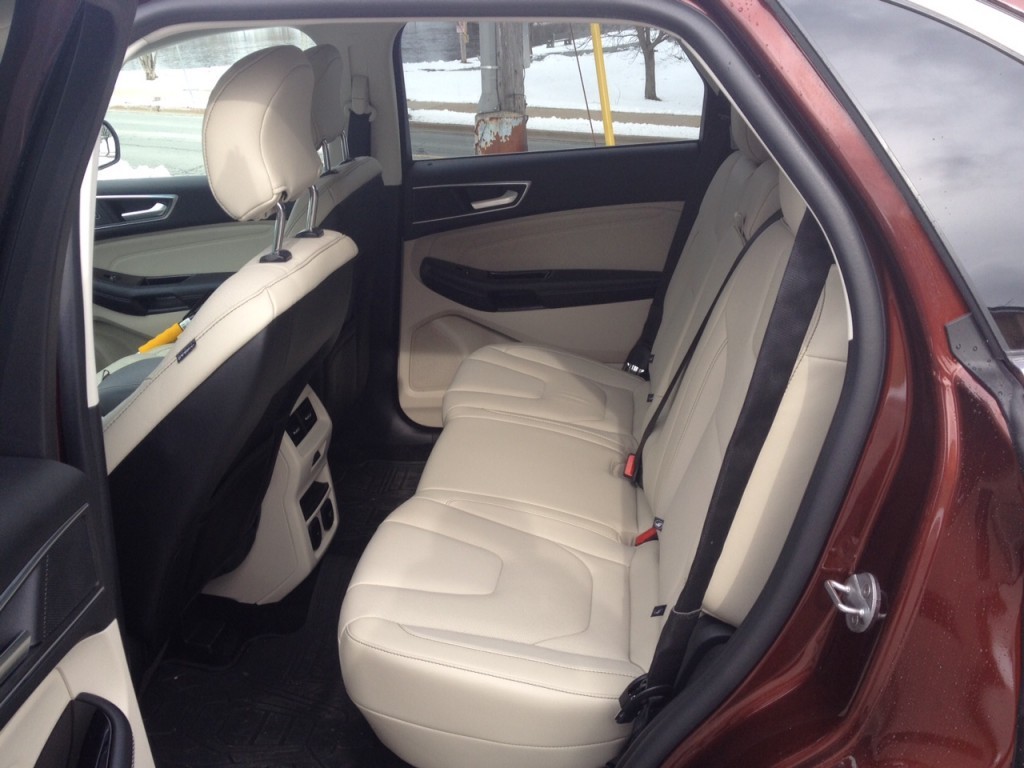 The gauges themselves are clear and easy to read, not to mention easy to use. Buttons on the steering wheel can control everything from fuel consumption, to oil temperature to the title of the song and band that’s currently playing on the radio and they’re all housed smartly within the gauge on the left or the ride. And intuitively enough, the buttons on the left of the steering wheel control the gauge on the left and the right buttons for the right gauge. Simplicity is a good thing.

Interior space is, as you’d expect, quite good especially in terms of shoulder room since the Edge is a rather wide vehicle. Head and knee room should also be adequate for most, although if you’re looking for a third row you’ll have to step up to the Explorer. 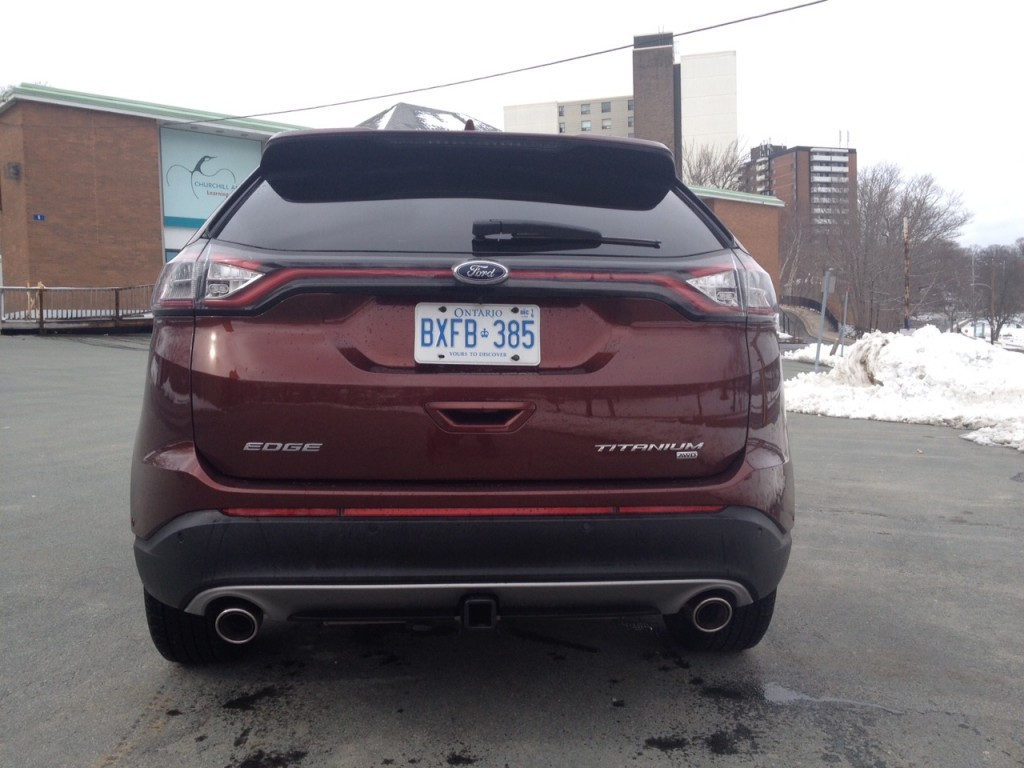 However for the second time, I found it difficult to get a comfortable seating position. The lower cushion is too short and it is seems to be angled to dump you into the foot well. On top of that, the peddles feel abnormally deep within the foot well as I often found myself straining my right leg just to get onto the throttle.

As mentioned, there are three options for you to choose from with the 3.5 litre V6 found under the hood of my tester. It produces 280 horsepower and 250 pound feet of torque. This is adequate power; it won’t win you many drag races but it also won’t leave you feeling wanting for more power. The unit itself is actually quite smooth and refined, even though most of the power is felt in the higher rev range. The six-speed automatic compliments this engine nicely with buttery smooth shifts. 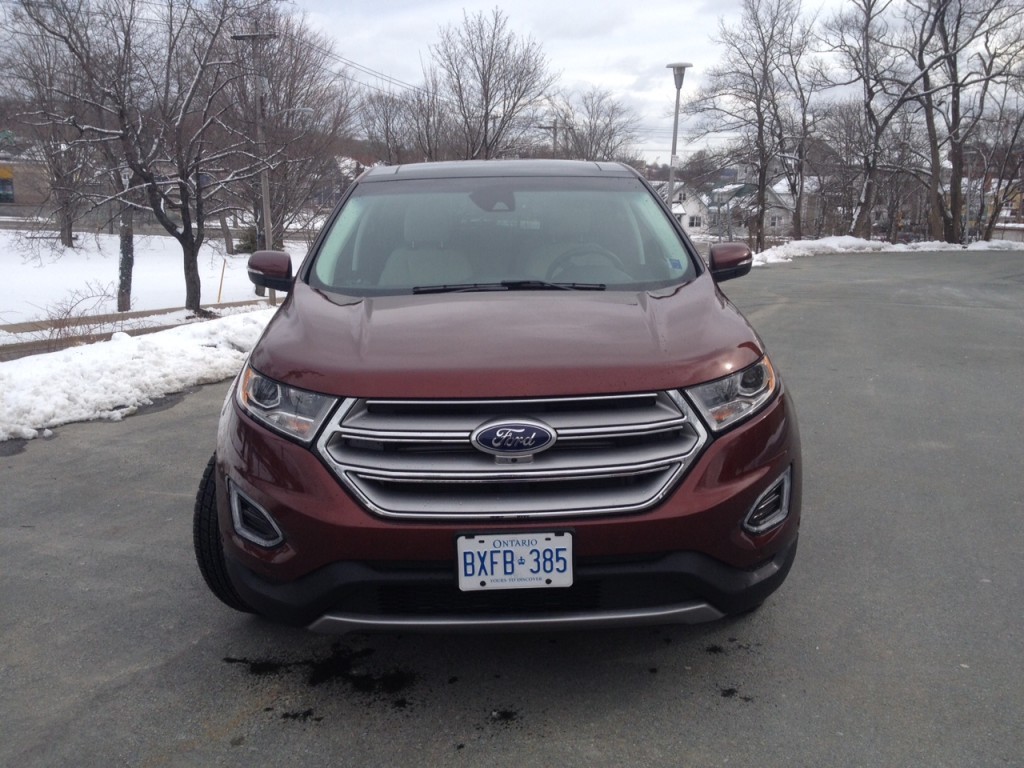 As mentioned, the Edge is a wide CUV but that doesn’t necessarily translate into stellar handling abilities. On top of that, the Edge feels heavy, at least more so than say, the Nissan Murano, which is a vehicle that also puts comfort ahead of performance. That’s okay though because it translates into a solid feel, especially on the highway where the Edge feels as though it’s gliding on the road.

The steering is speed sensitive which means it is lighter at lower speeds, and it tightens up nicely once you get up and moving. 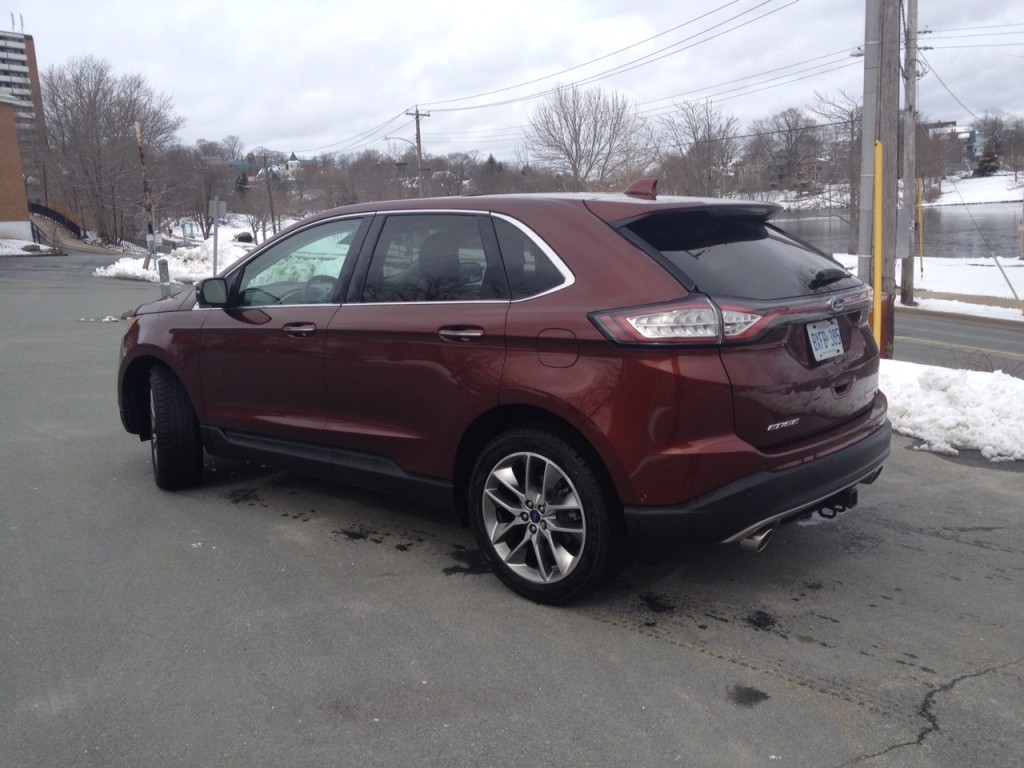 But it’s wide stance does make it a bit tricky to park – if you’re depth perception needs a bit of work then you should be particularly mindful in parking lots. Luckily a premium ride adorns the Edge most of the time which means imperfections in the road are rarely felt.

On top of that, you get a decently quiet cabin which is well shielding from engine and road noise. 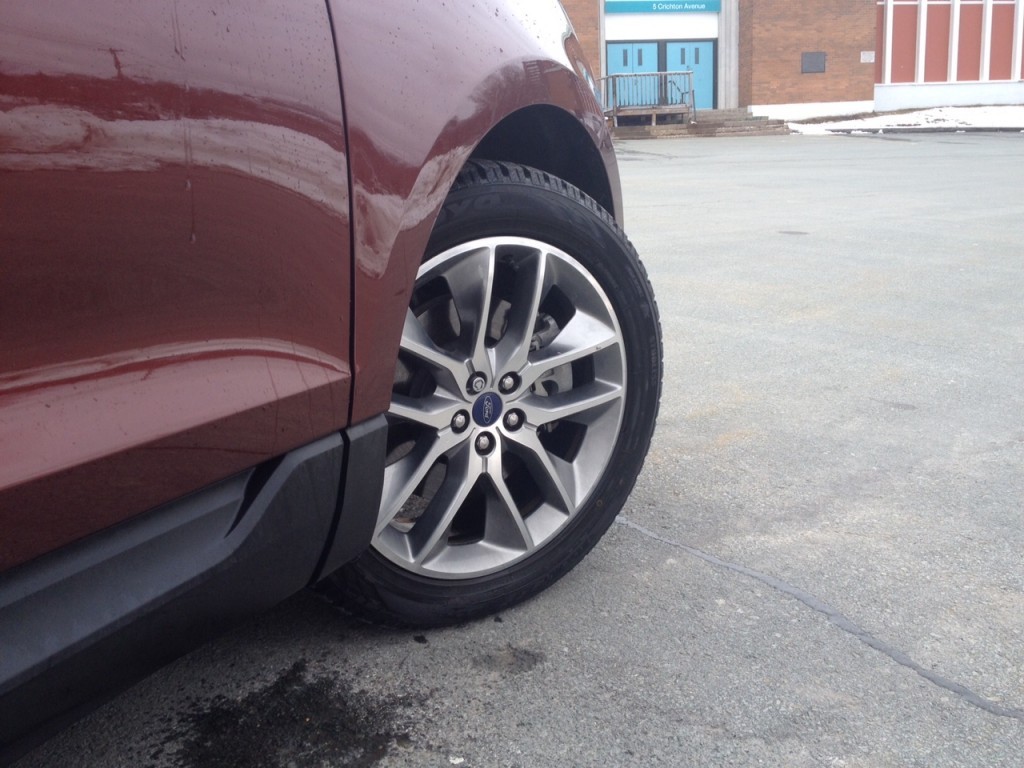 Here’s where things get pretty interesting. When I drove the 2.0 litre Ecoboosted Edge a few months ago, I returned a disappointing 13.9 L/100 kms during the week. Robert, who has a self-admitted heavy right foot, managed 13.7 L/100 kms during his week with the Edge Sport. So how did the final engine fair? 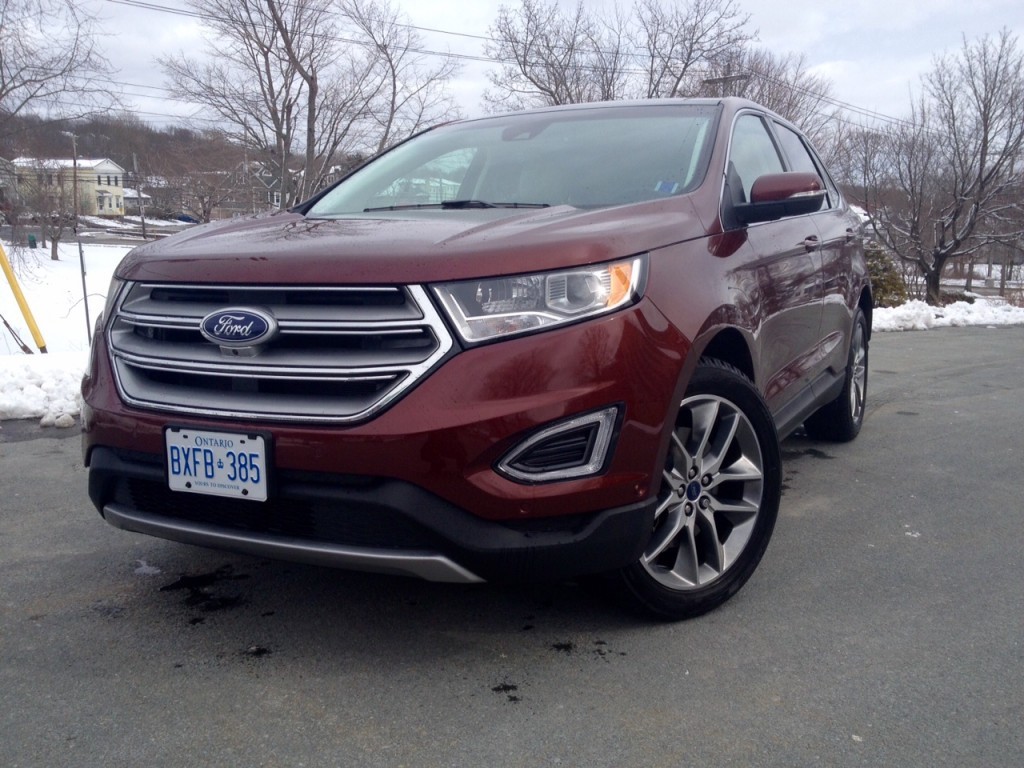 So what does this all ultimately mean? Well, when it comes down to it, it seems as if the engine really does play a significant factor depending on what you’re after because it’s clear that the Edge is a capable and strong contender within the segment in terms of technology, ride and quality.

If our tests of all three engines is any indication, it would seem as if the 3.5 litre offers the best bang for buck in terms of performance and fuel consumption. Not only that, it was notably quieter and seemed more refined than the 2.0 litre Ecoboost which seemed as if it was working harder most of the time and that may explain the poorer fuel consumption over the two larger units.

But at the end of the day, regardless of fuel consumption, all three engines suit the Edge decently well. The only way to really tell which is best for you is to get out and try one.