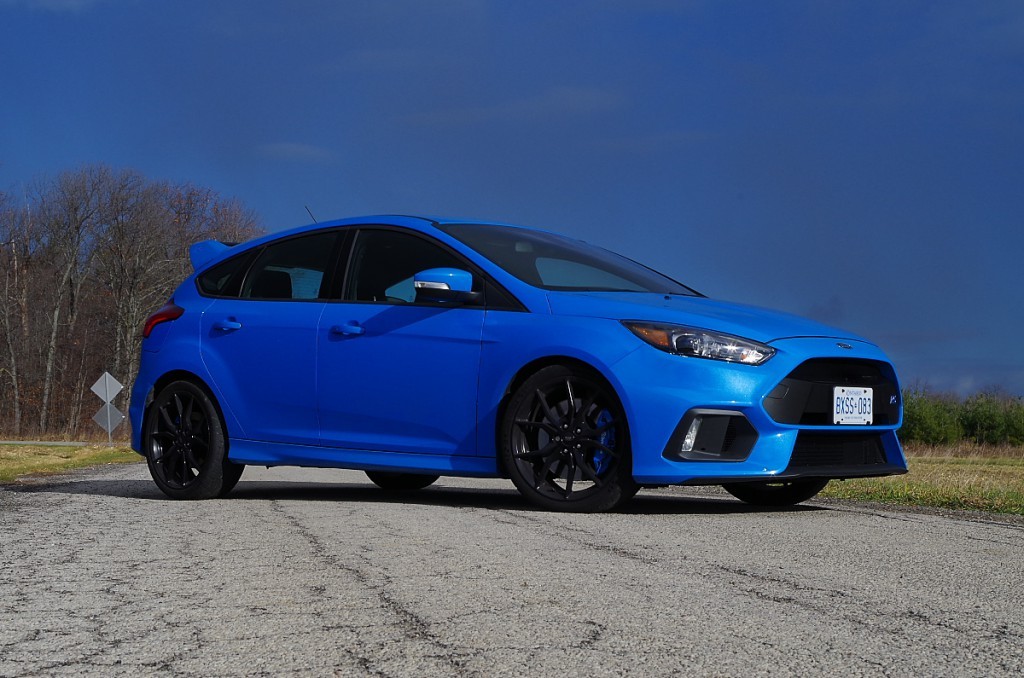 Ford should give owners of Focus RS’s unlimited access to their corporate legal teams, or in the very least a prepaid X-Copper gift card. This car will cost you your license in no time. I drove a Nitrous Blue 2016 in November when the temperature was hovering around 9 degrees. The test car was wearing the stock Michelin Pilot Sport Cup 2 tires, which are fiercely sticky and marvelous summer only tires; but the weather had somewhat limited their grip. Ford supplies every RS with a set of mounted winter tires at no extra charge as part of the standard equipment which comes with every available option. The only option you can have any say in is colour.

There has been an overabundance of hype surrounding this car. The excitement is partially brought on by the fact that we have been hearing rumors of ultra-high strung hot- hatches for decades without ever be able to sample them. Finally Ford has made a global version that even the stringent North American rules have allowed, and gear heads are barely able to contain ourselves. But with so much excitement the potential for disappointment is almost overwhelming. Can the RS really be as good as rumoured, or were the Europeans just toying with us? 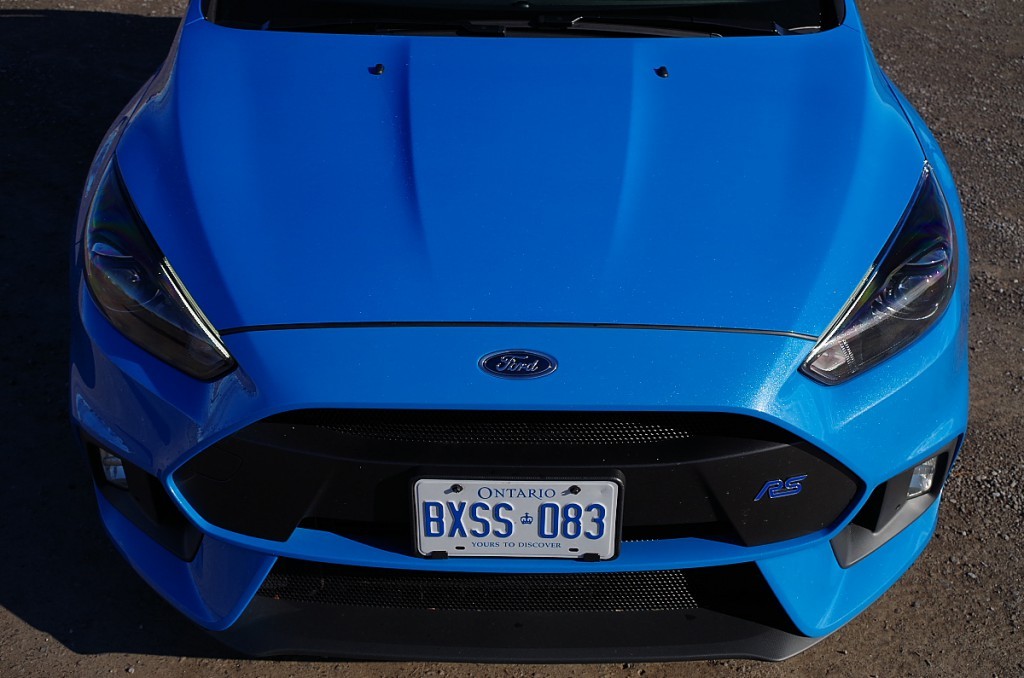 There is not much separating the Focus line in terms of styling. The RS builds on the performance oriented looks of the ST with a slightly more aggressive body kit. The first feature I noticed was the larger air intakes in the front end; then the functional rear wing and a bulkier squatter stance. Other highlights include vertical fog lights and a front splitter that may come in handy for clearing snow. It is far more attractive than a Subaru STi, but what isn`t? And a Volkswagen Golf R cannot increase an onlooker’s heart rate but the RS does. I am still not sure if that is due to styling or the hype that has surrounded this car for so long. Whatever the case, the RS will draw stares, especially in the “over here officer, I’m the one you’re looking for” blue.

The headlights are adaptive and quickly shine their light in the direction the tires are pointed, which is more necessity than convenience at the kind of pace ground can be covered. The ultra-sticky 235/35ZR19 Michelin tires wrap unique wheels which do their best not to interfere with your view of the large 4 piston Brembo brakes. The blue calipers are more than just a gimmick, these binders scrub speed like a tail-hook on an airplane. 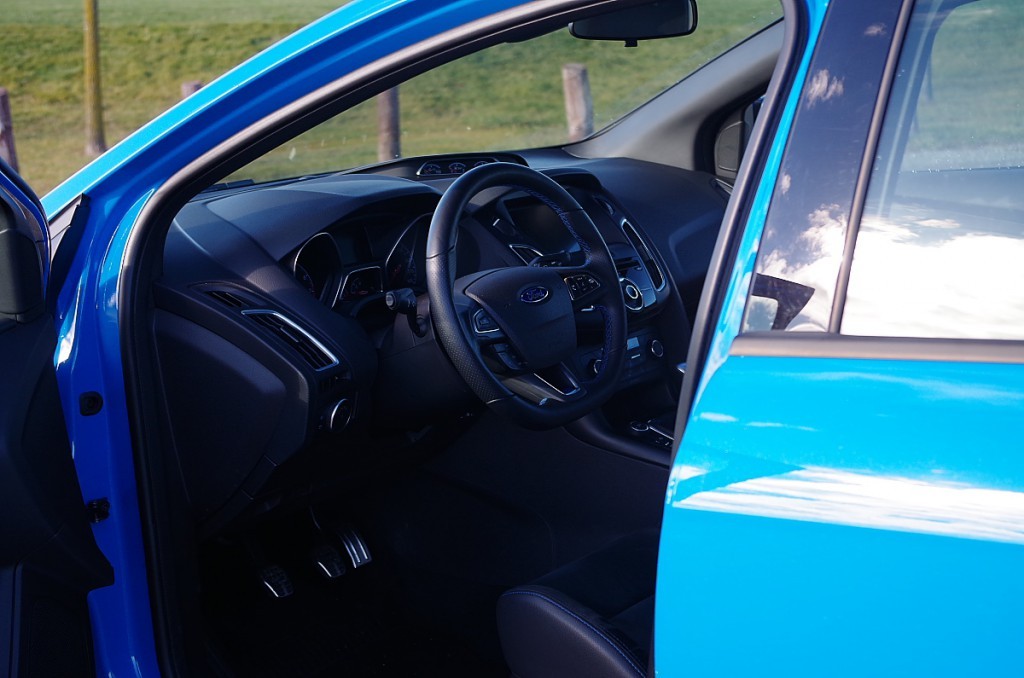 Even less has been done to differentiate the RS from even a base Focus. Plastics are a grainy as ever, the dash design is function over form and you will question the sanity of paying $50K for a Focus. You do get the same secondary gauge cluster found in the ST mounted atop the dash to show you boost pressure, oil pressure and oil temperature. The biggest change is the Recaro seats that envelop you so tightly that it will begin to hurt after a while. Blue stitching on the flat bottom steering wheel, seats, e-brake handle and floor mats is used to keep things sporty. RS badges adorn the steering wheel, seats and scuff plates, just in case you forget what you are driving. The rest is pure Focus meaning you have numerous buttons and knobs, SYNC3 and a handy amount of easily accessed cargo space. You can actually fit all of your groceries in the hatch and the 60/40 folding seats open up endless cargo possibilities. I had 4 full grown adults seated in relative comfort, a 5th would have been pushing it. 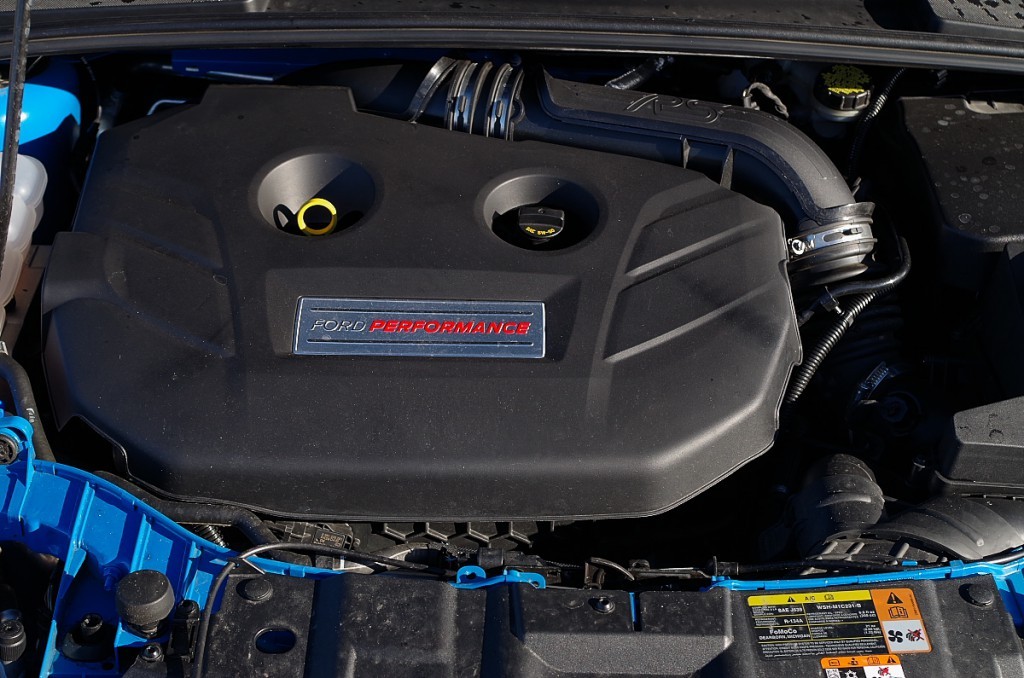 Any thoughts that the RS is just a slightly altered ST disappear as soon as you fire it up. The soundtrack is raucous and raw. Think of it as a muffled rally car, it even pops and burbles on overrun, a phenomenon I found myself unable to resist exploiting at every opportunity. Power comes from the 2.3L Ecoboost found in the Mustang, however, the RS version has been unleashed to develop 350 hp and 350 lb.ft of torque. This extra oomph comes courtesy of a massive turbo, an even larger intercooler, stronger cylinder liners and an enhanced cylinder head.

All of that power is transferred through a slick and quick shifting 6-speed manual transmission with a stronger clutch that never felt overpowered even when Launch Control was used. The party piece has to be the remarkable AWD system that uses torque vectoring to send up to 70% of the torque to rear axle and then send all of that to either rear tire. What this means is the RS will exit a corner far faster than you may expect is possible from a FWD based car. If you felt a bit of understeer, in theory all you would need to do is press the throttle harder and the AWD would send more power to the outside rear tire. This has the effect of speeding up that tire and forcing the car back to your preferred line of travel. The front wheels are also controlled, but in place of torque the system relies on brake application to keep things in check. 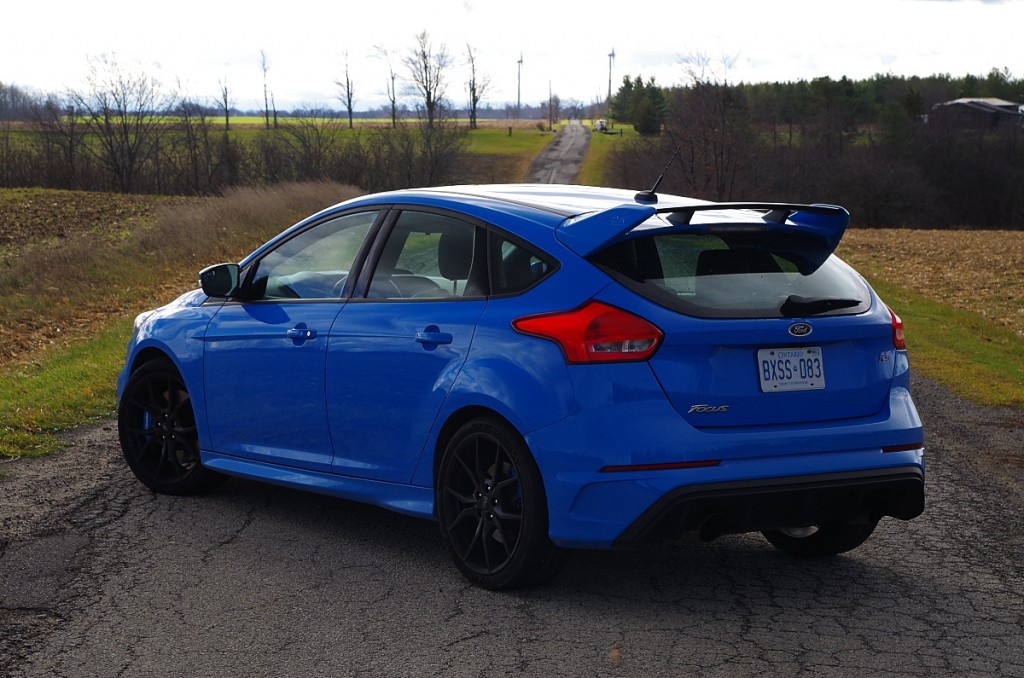 The Ecoboost engine is amazing. While it does exhibit a touch of turbo lag, all is forgiven once it spools up and a wave of torque presses you into the Recaro’s. Keep the revs above 3,000 and you will never have to wait for power; the car lunges at the slightest throttle pressure egging you on. Driving on my favorite backroads the RS, with the suspension set to Normal, was an absolute blast. Every corner was rewarding, and the harder I pushed the better the car felt. The same run in Sport was even better, but as soon as I started to drive in a normal manner things became uncomfortable.

At speed the car is a hero, but a normal pace in anything other than Normal is punishing. The suspension has already been made stiffer than the ST, by adding stiffer spring’s front and rear, 33% stiffer up front and 38% out back. By selecting a firmer damper setting a paved rural road begins to feel like a bombed out run way. In Track things are unbearable, the car jiggles and jolts you so harshly that after 10 minutes you feel like you went 3 rounds with an MMA fighter. Normal and Sport are the only modes that you can reasonably use on public roads; Track and Drift really are for track use only.

The steering is sharp with immediate almost telepathic response. A slight twitch of the wrist can alter your direction of travel. The handling is so rewarding that I found myself always taking the longer route in search of twisty sections of tarmac. My foot always found the floor when exiting a bend and not once did the car exhibit either under or oversteer. Due to the cooler temperatures I dared not test out the Drift mode, nor was I able to even come close to reaching the limits of the RS’s abilities. I would need a warm summer day and a track to do that and I still may not be able to. Anytime you add a massive turbo to any engine fuel economy will suffer. If you are concerned about saving money on fuel buy a hybrid. The RS is a rally car slightly detuned for street use and will therefore consume more than its fair share of Premium gas. According to the Natural Resources Canada guide the official numbers are 12.1/9.3/10.1 L/100km City/Highway/Combined. On the highway on a flat section at a steady 100km/h I briefly glimpsed 8.8L/100km, then I remembered what I was in and the foot went to the floor, fuel mileage be damned. In 250 km’s I burned ¾ of a tank. Driven hard you could probably watch the fuel gauge drop if you were brave enough to take your eyes off the road. So a green machine this is not, it is exactly as advertised a fuel guzzling beast. 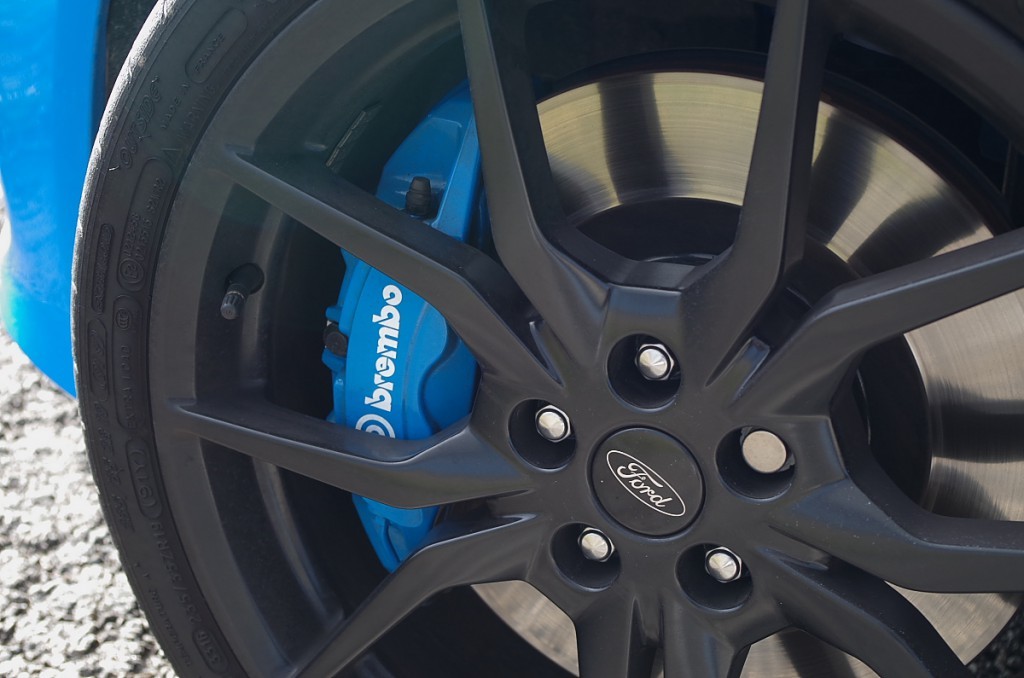 Breathe a sigh of relief because it wasn’t just hype The RS is ridiculously capable and quick; a wild beast of a thing that will thrill drivers and terrify passengers.. It is unbelievable that a car based on the FWD Ford Focus can be this good. It can be a track day monster while still being civilised just enough to take on the school run. Use as a daily driver may be stretch. By the end of the week I was sore and stiff, perhaps this was exaggerated by past injury but even my passengers found the ride punishing once the thrill wore off. It would make for the ultimate weekend car though. If I had $50K to spend on a toy, there is nothing else I would consider after driving this. Owning one would be like marrying a dominatrix, sure it urges you to be naughty, but after a few hours you are sore in odd places. 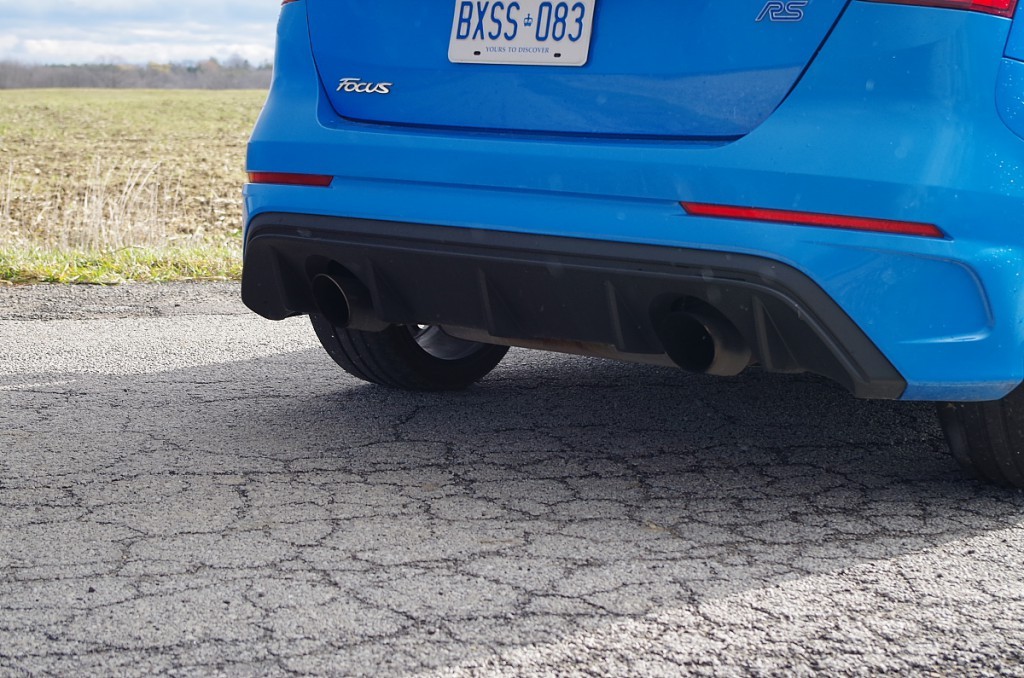