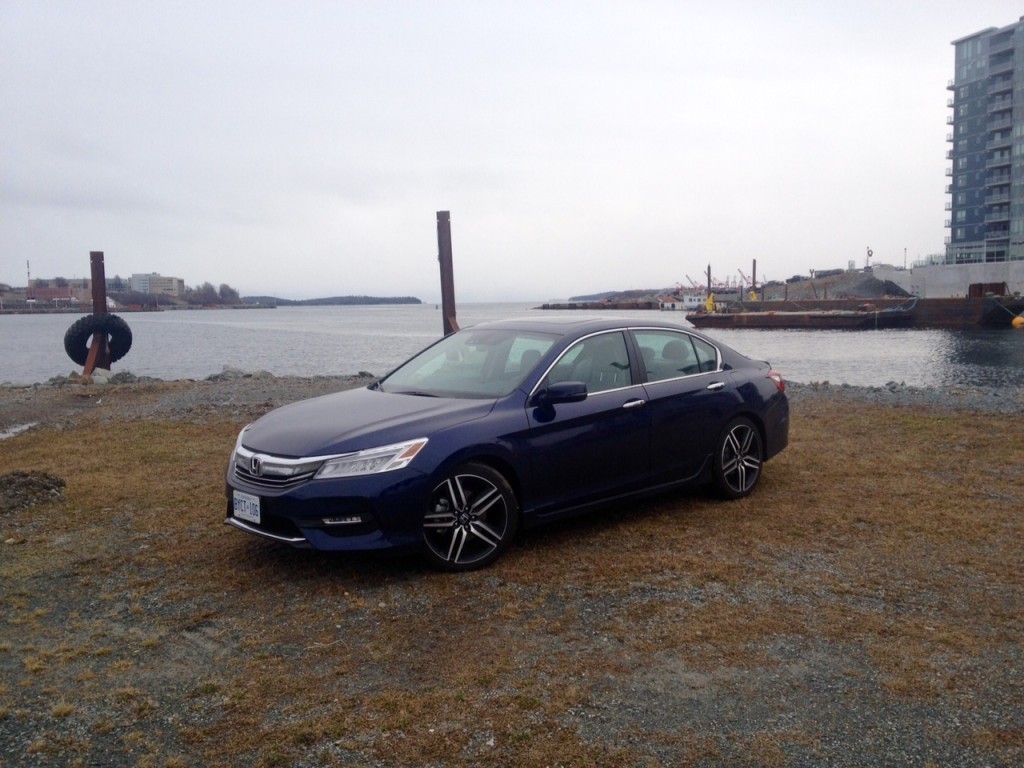 I have to admit, I’ve been a Honda Accord fan ever since I can remember. I remember first becoming enamoured when my cousin bought a 1992 Accord coupe in white. He took me out for a drive and I fell in love with it, so much so, that I made him promise to give it to me once he bought a new car (and despite the fact that I was still well under the legal driving age).

Then Honda redesigned the sedan and coupe in 1994. The love grew even stronger. Indeed, this love affair kept on happening with each passing generation. In fact, my very first car was an 1997 Acura CL which is, for all intents and purposes, a fancy Accord coupe. But then then 2003 model year came around and that’s about when we hit a typical lull in our relationship. After about 10 or so years, the Accord, while still fairly attractive, had gotten bigger and heavier. By the time the 2008 model year had come the Accord was the biggest it had ever been.

How could this possibly be a problem? Well part of the appeal of the Accord was its lighter weight, nimble proportions. This made it more tossable in the corners and thus more fun to drive.

But Honda didn’t have very much choice in growing its once mid-size sedan. The market kept moving in that direction and it had to keep up.

Fast forward to 2016 and you’ll find the Accord still chugging away, albeit in a fiercely competitive segment – one that perhaps can make or break a car company if their offering isn’t up to snuff.

With that in mind and despite having just redesigned the Accord for the 2013 model year, Honda the automotive world has a short attention span. Car companies can no longer expect to get a five year cycle before a refresh or a redesign anymore.

This is why they’ve offered up a significant refresh for 2016 to keep the Accord’s appeal high. Has it worked? I drove one for a week to fine out. 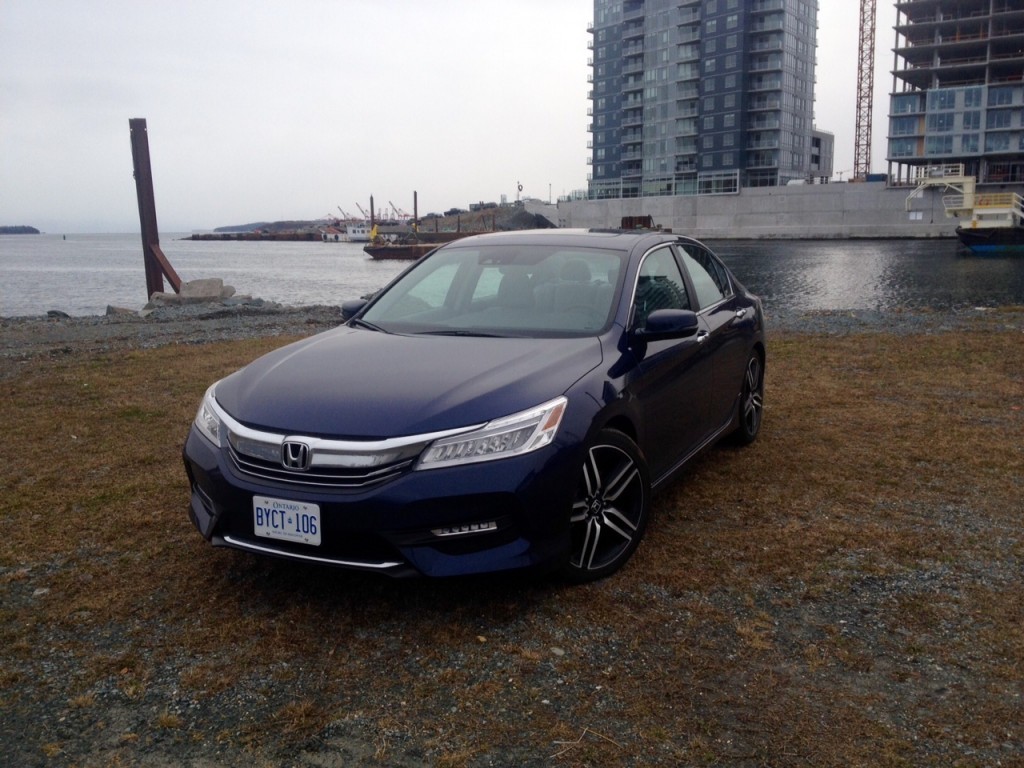 New exterior changes include a new front fascia including a reworked grille, updated headlights which, if you choose the Touring trim, feature all LED’s (including LED fog lights). New wheel designs and a new deck lid and tail light design also help complete the look. The Sport and Touring trims feature gorgeous looking 19-inch wheels. Those 19 inch wheels are the biggest wheels offered on an Accord yet and they certainly help it to stand out as I caught many passersby stopping in their tracks staring directly at the wheels. Honda has managed to stay out of the ‘four-door coupe’ craze that’s currently the hot trend in the mid-size segment. As a result, it’s probably the most conservative looking in the group, but to my eye it’s also the most original looking design and it exudes something that’s more handsome than sleek. In fact, the refresh almost makes it look like it could sport an Acura badge. 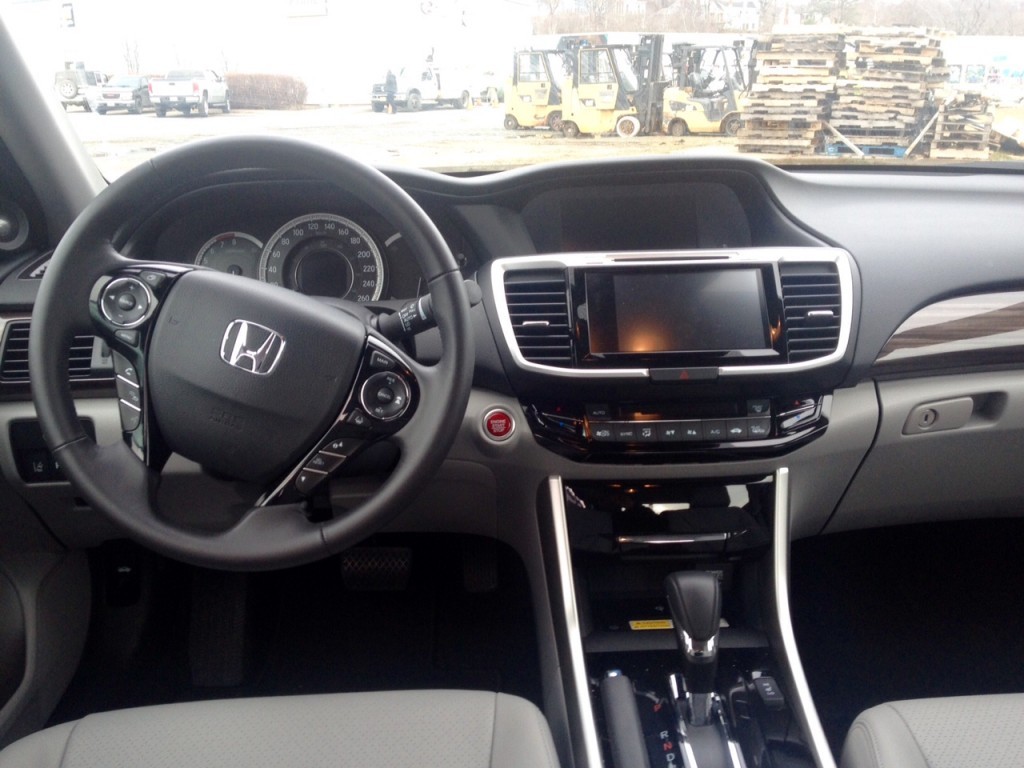 Inside, things haven’t changed a whole lot from the 2013 model. Perhaps the biggest change is the flush touchscreen which has now omitted the volume knob. This is a notorious trend making its way onto all new Honda product. You and I have a duty to shun this idea until Honda gives us our volume knobs back because the alternative touch does not work nearly as well and it also forces you to take your eyes off the road. The touchscreen itself responds reasonably well to commands but it is still a bit of a complicated set up. Thankfully, the Accord now features Apple’s Carplay which lets you plug your iPhone in and voila. That not-so-great infotainment system is gone and your iPhone’s screen appears and can be used almost the same way your iPhone does. 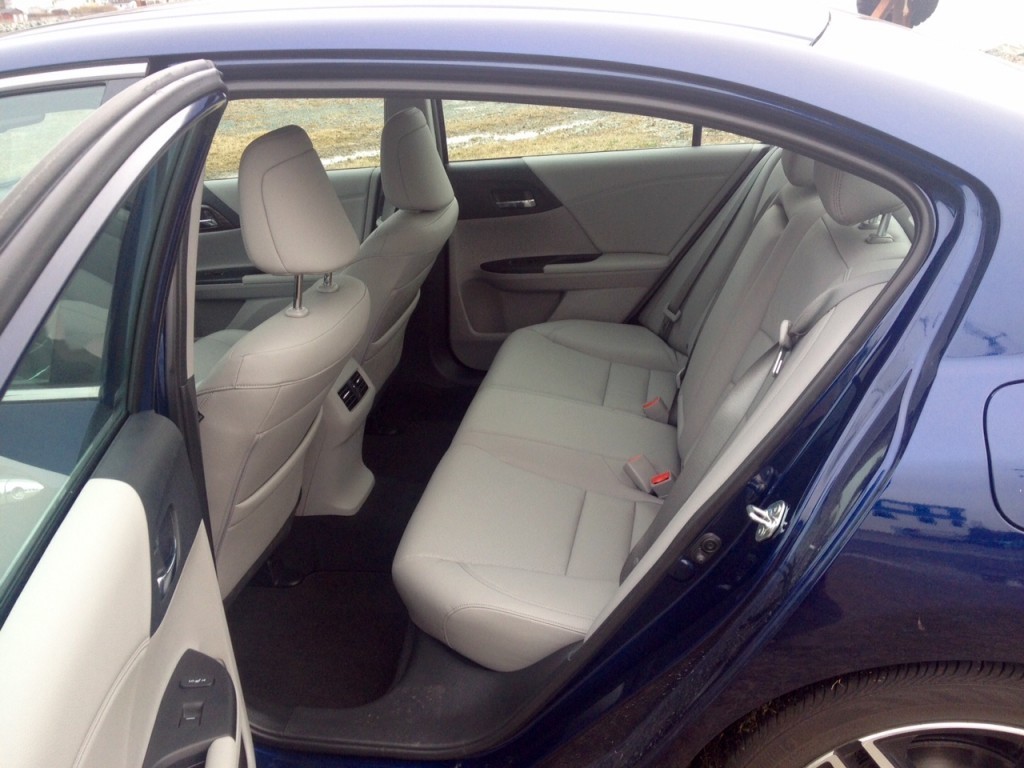 The seats are quite comfortable but the front buckets could use a bit more side bolstering. Rear seat passengers should have little to complain about in terms of comfort, head and knee room unless they are seated in the middle seat where the raised bottom cushion and centre hump make for a less desirable ride. Thankfully, those seat now finally fold down. I still can’t believe it took Honda until 2016 to give their mid-size family sedan folding seats. With that said, the seats do not fold flat and the pass through opening is more like a crevasse, so hauling long bulky items may prove to be an issue. The trunk itself is an adequate size.

On the whole, the interior is quite luxurious and could possibly even pass as an Acura interior. 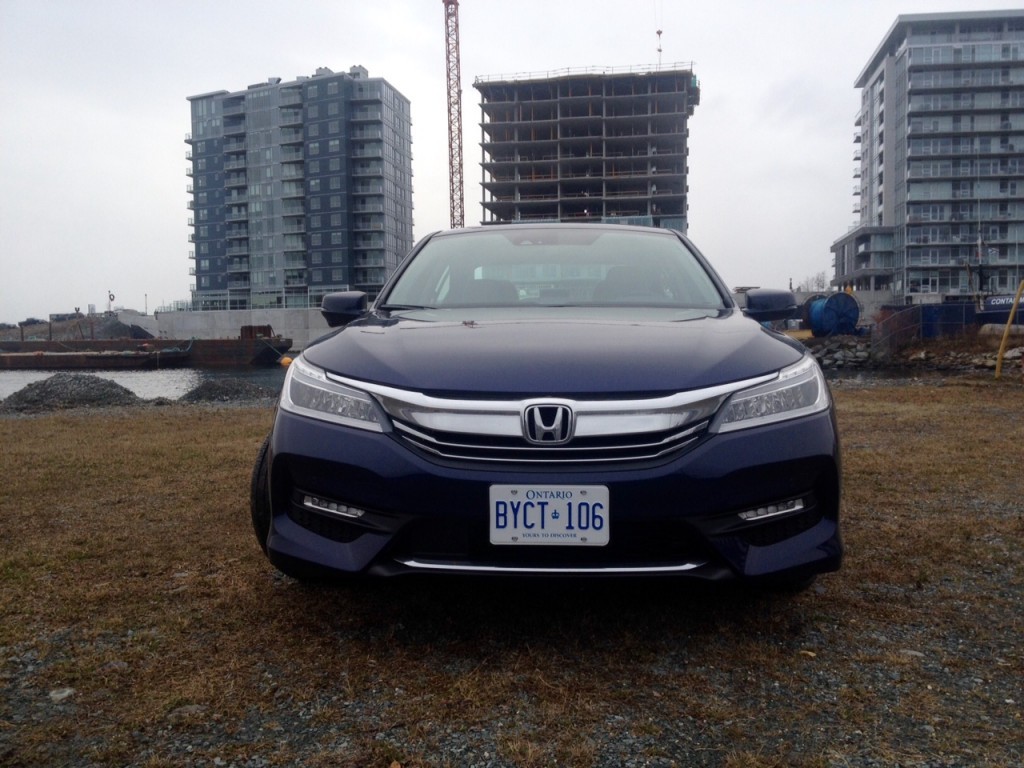 The Accord gets two power plants to choose from and, oddly enough, three transmission choices. Most Accords will be fitted with the 2.4 litre 4 cylinder engine mated to a six-speed manual or a continuously variable transmission (CVT). This unit with the optional CVT was fitted to my tester. It makes 185 horsepower and 181 pound foot torque. While the CVT isn’t the most irritating I’ve ever tried, I suspect the six-speed manual will give you back your soul while driving, though it will cost you a bit more at the pumps. This engine will likely be satisfactory for most, but if you’re the type that prefers a bit of hot sauce with your steak, you can also get a V6 which makes 278 horsepower and 252 pound foot of torque. If you opt for this engine, you get a regular six-speed automatic which would be more fun to drive than the CVT but not nearly as fun to drive as a six-speed manual. For some reason you can’t get a six-speed manual with the V6 engine unless you opt for the coupe. 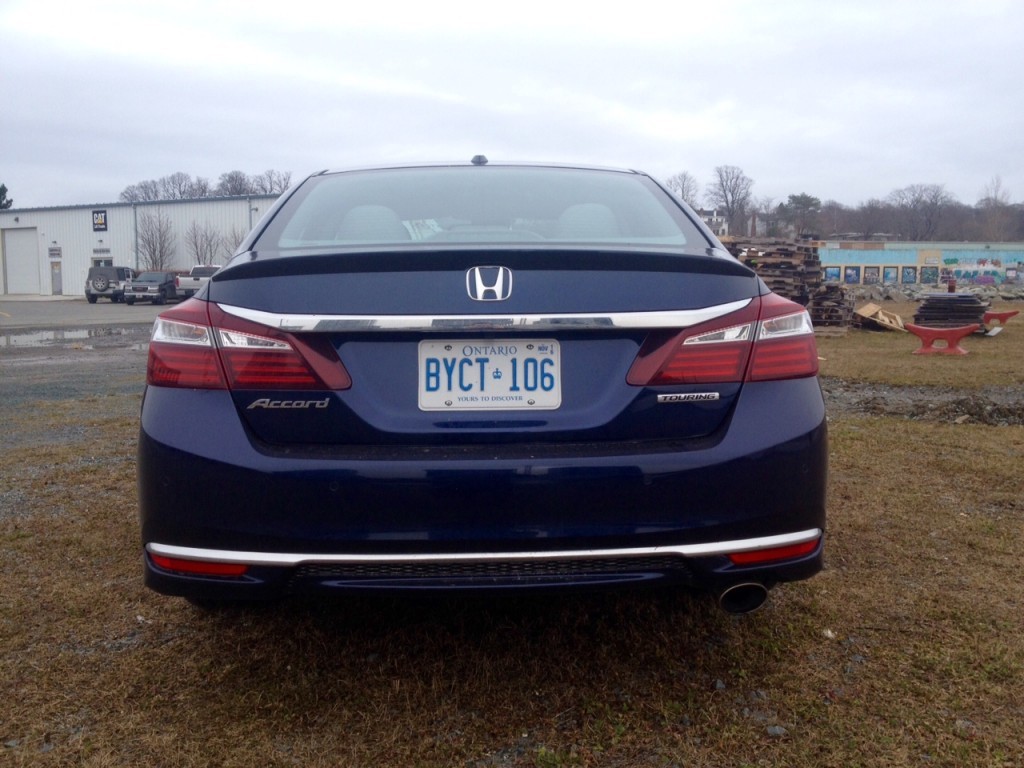 One of the big reasons why I originally fell in love with the Accord was its driving dynamics. While the newest version certainly doesn’t have the same nimble, agile feel of past Accord, it also can certainly claim to have some of the best ride and handling characteristics of the segment. Handling is still strong and stable in the corners, and steering feedback isn’t and numb as some of its competitors, but I’d still give the Mazda6 the edge for driving fun. 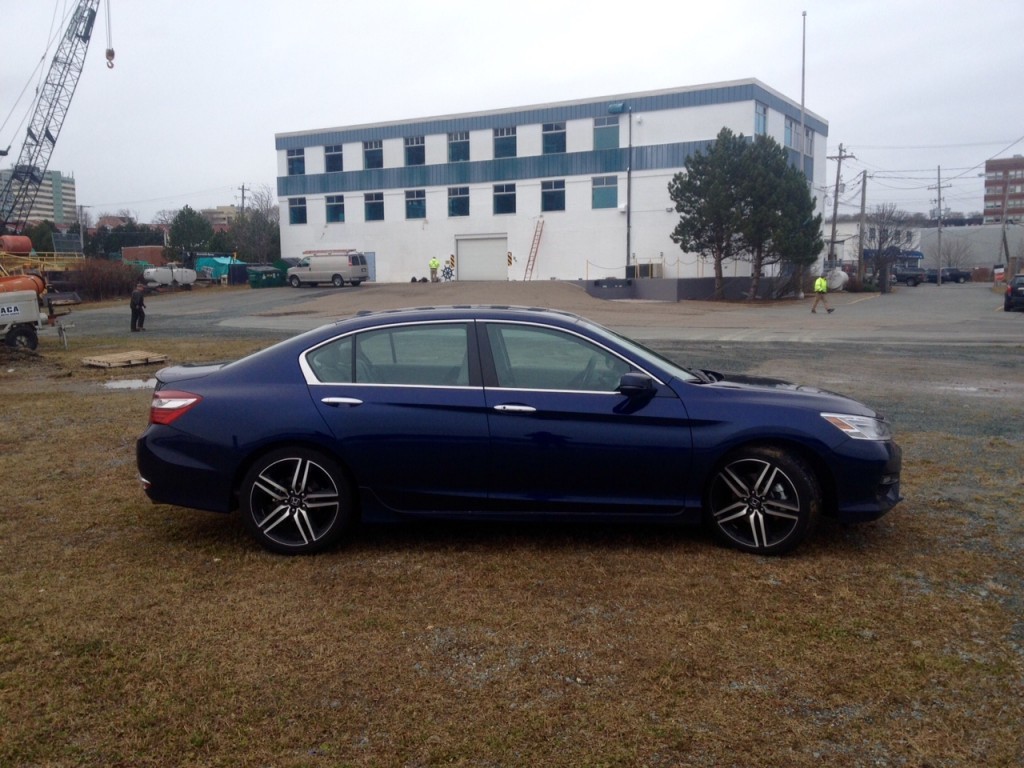 On the highway, the Accord almost feels as solid as a German sedan. Low end power is at the ready for passing and road and wind noise are minimal. The top touring trim also offers a host of driver aids such as adaptive cruise control, lane departure warning, blind spot monitoring and collision warning systems. 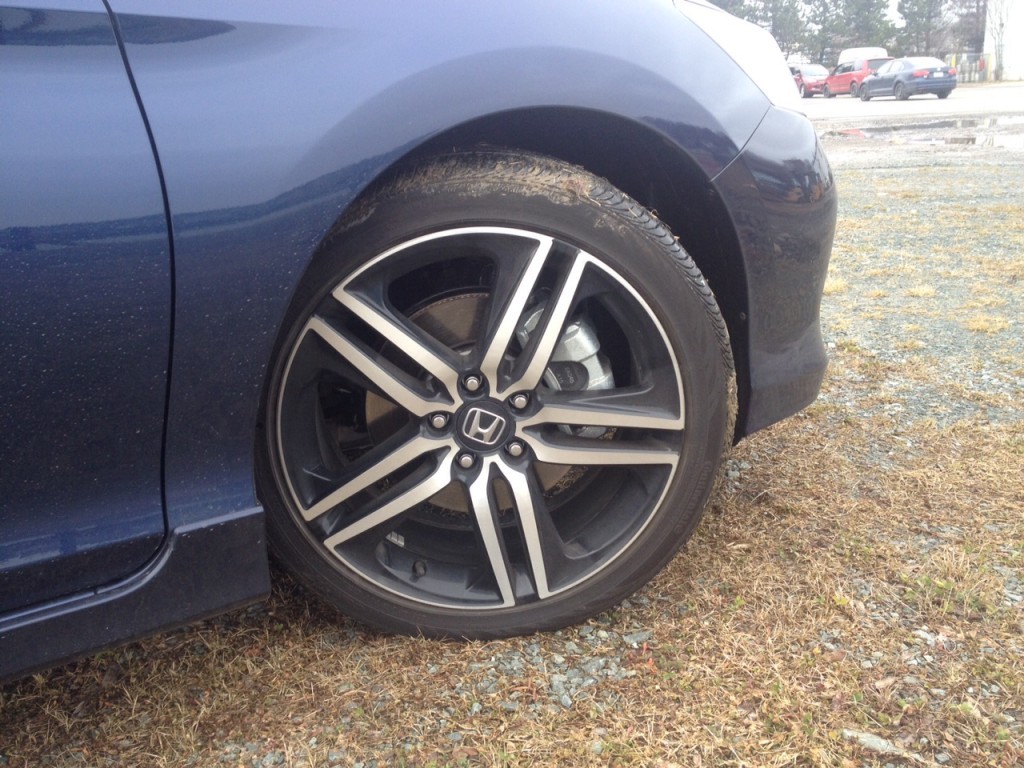 Around town, the Accord is fairly easy to maneuver, though ride comfort can take a slight hit with those low-isa profile 19-inch rims. That’s where you may feel most of the imperfections on the road. Power around town is adequate as mentioned, even if you keep the Accord in ‘Econ’ mode which essentially keeps your revs down in order to conserve more fuel. 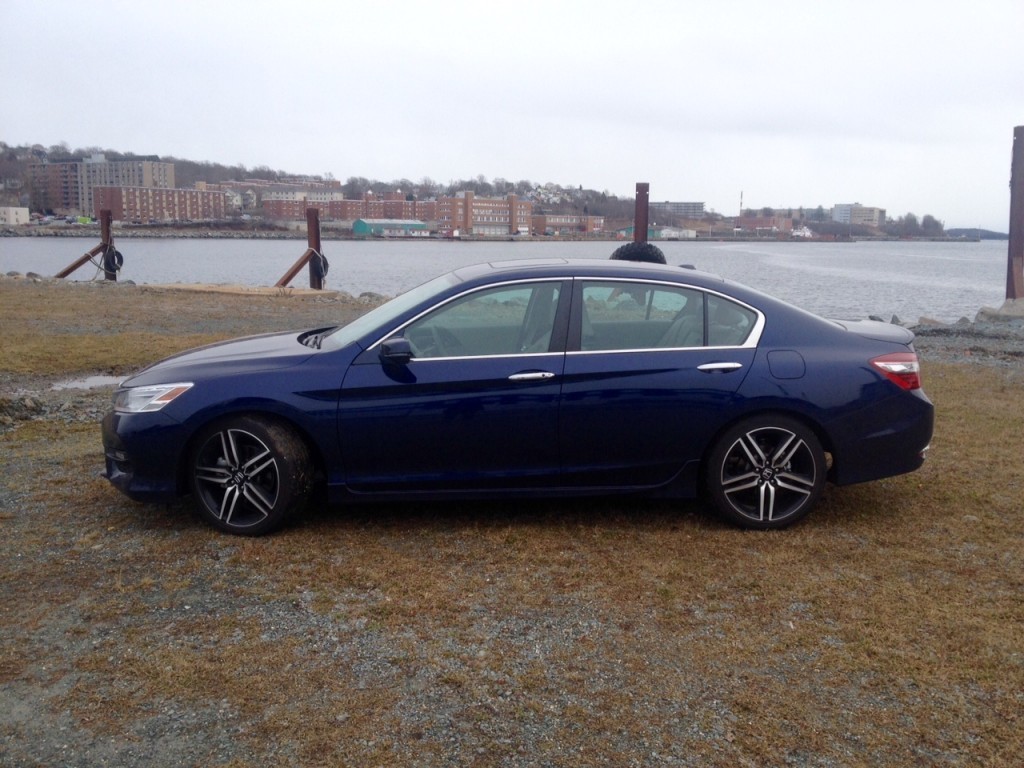 The updated Accord is certainly enough to keep it relevant in a rapidly changing segment. It’s conservative yet handsome looks, high quality interior and relatively engaging drive  still makes it a top choice. However it doesn’t seem to be able to re-capture the magic of Accords of the past. This isn’t the same car I fell in love with, but with time (and the right engine and transmission combination) I could see the love return. There were a few moments when I found myself with a bit of a grin on my face, which means the soul of the Accord is still in there somewhere buried under all the technology, mass and weight.

But Honda, for the first time in a while, is facing a bit of a conundrum that’s all too familiar to Toyota. This Accord in Touring trim might be as good as what you would find in an Acura TLX, only its noticeably cheaper. A lot of Toyota’s have become so good that you have to seriously wonder why you’d spend the extra dough on the Lexus equivalent. I suppose it’s not a bad problem to have, but if you are considering a TLX, you may want to take a jaunt over to your local Honda dealer to try the Accord before you sign on the dotted line. 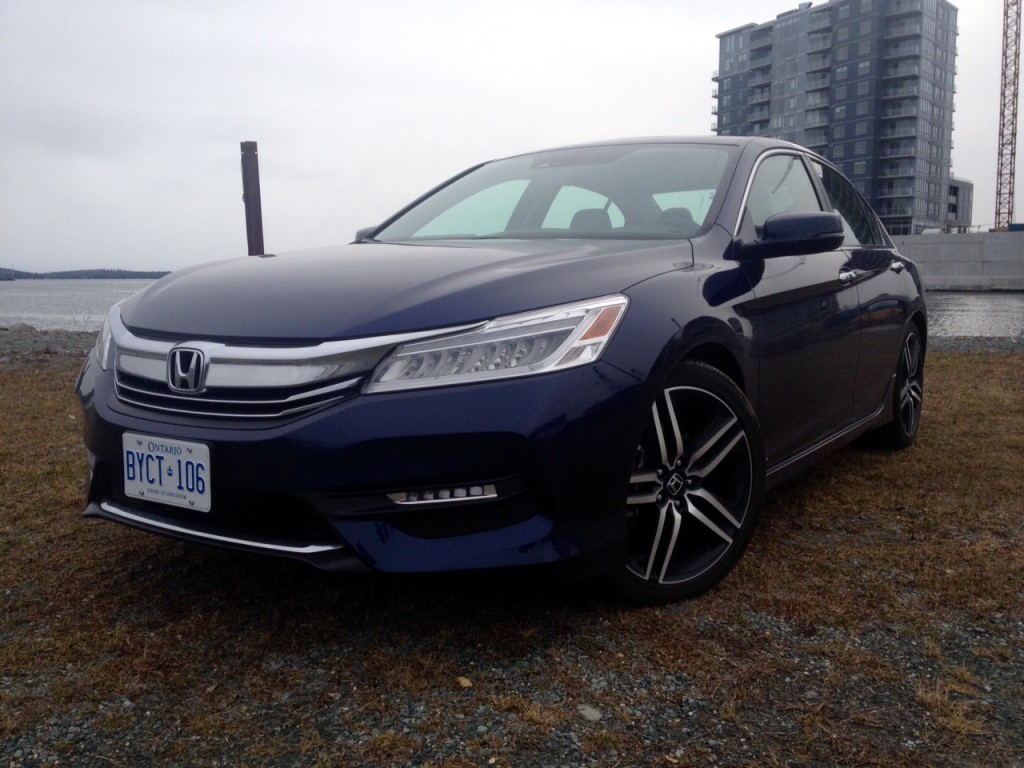