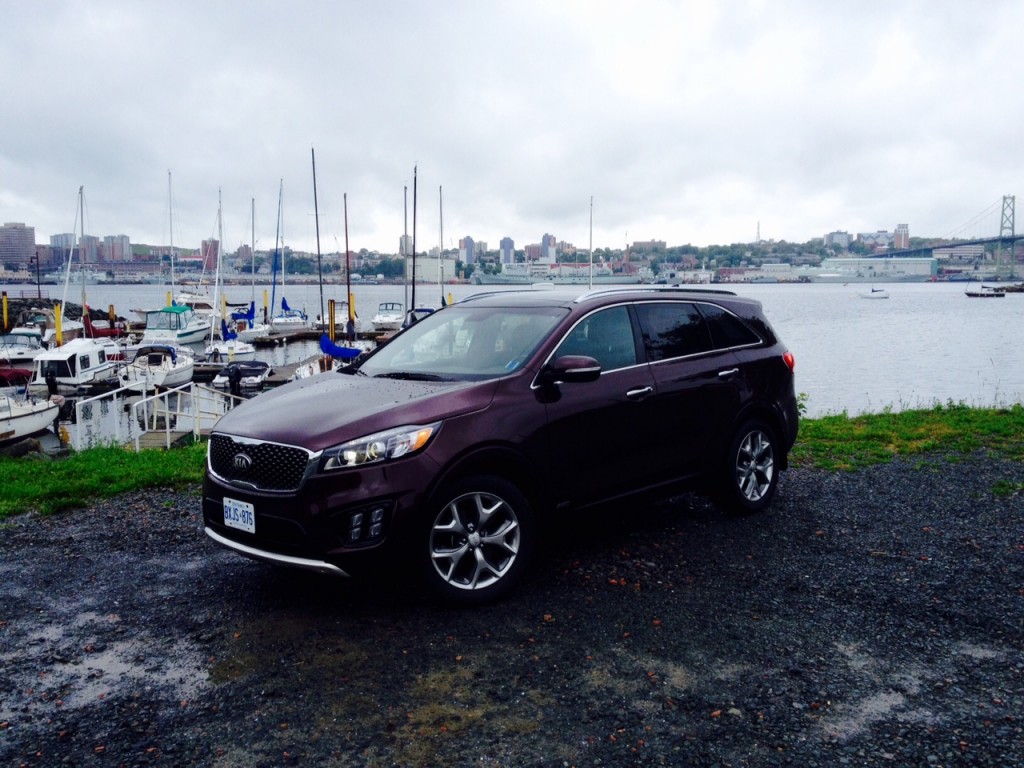 I have a friend who works for General Motors. As we sat in traffic in the 2016 Kia Sorento Turbo, he mercifully halted our politically charged conversation in order to declare something:

“You know, I think this might be better than the [Chevrolet] Equinox,” he said quietly, staring ahead, making no eye contact.

I looked over, a bit in shock. My friend, who will remain nameless to so as to not get in trouble with his employer, has been an avid GM fan ever since I can remember. To his mind, GM can do no wrong and consistently builds better vehicles than the competition. I decided to analyze for sarcasm. None detected.

“Seriously?” I responded, still in need of confirmation.

“Don’t make me say it again,” he said, slightly uncomfortable with his realization.

For 2016 Kia has added a third, brand new engine option designed to keep an element of performance all while maintaining respectful fuel consumption numbers: A turbo.

Is it really good enough to sway a long term GM fan boy though? I drove one for a week to find out. 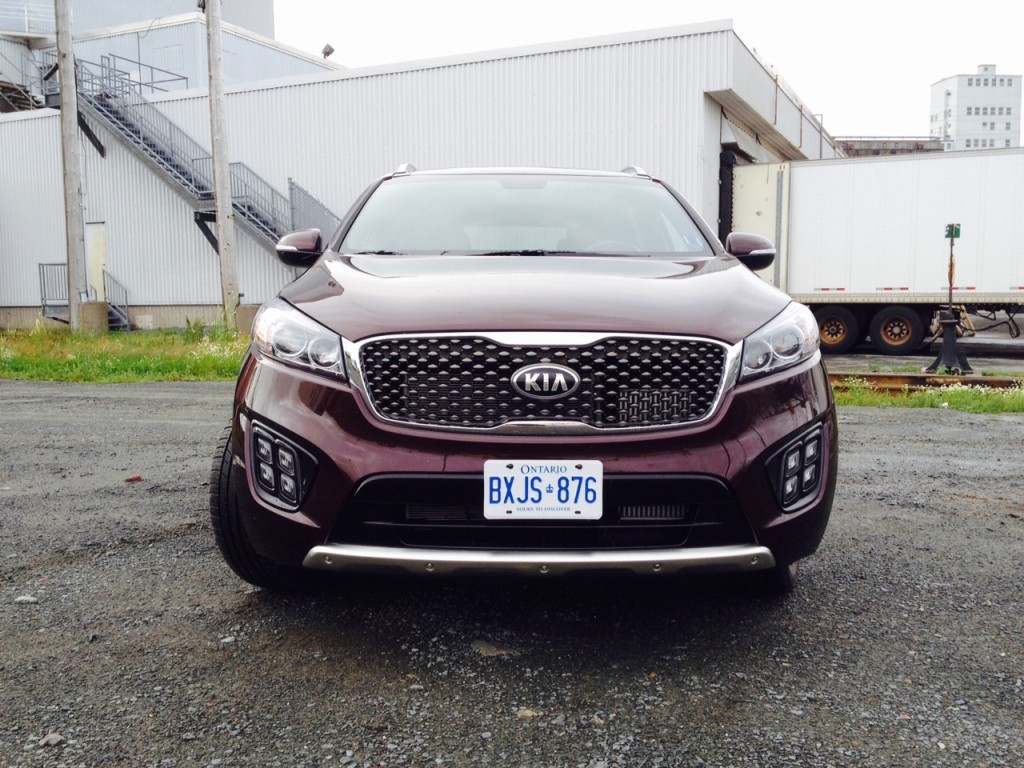 Ever since Kia enlisted one of Audi’s chief designers to style their vehicles, it seems as though Kia can due no wrong in the styling department. And in typical German fashion, that means a lot of new Kia’s corporate style is now handsome, yet conservative. The Sorento’s style is more evolutionary than revolutionary, making it a bit difficult to differentiate it from the previous generation at first glance, but there is no denying that the Sorento has no bad side. It’s agreeable and classy styling makes it look right at home in suburban driveways normally filled with premium vehicles. 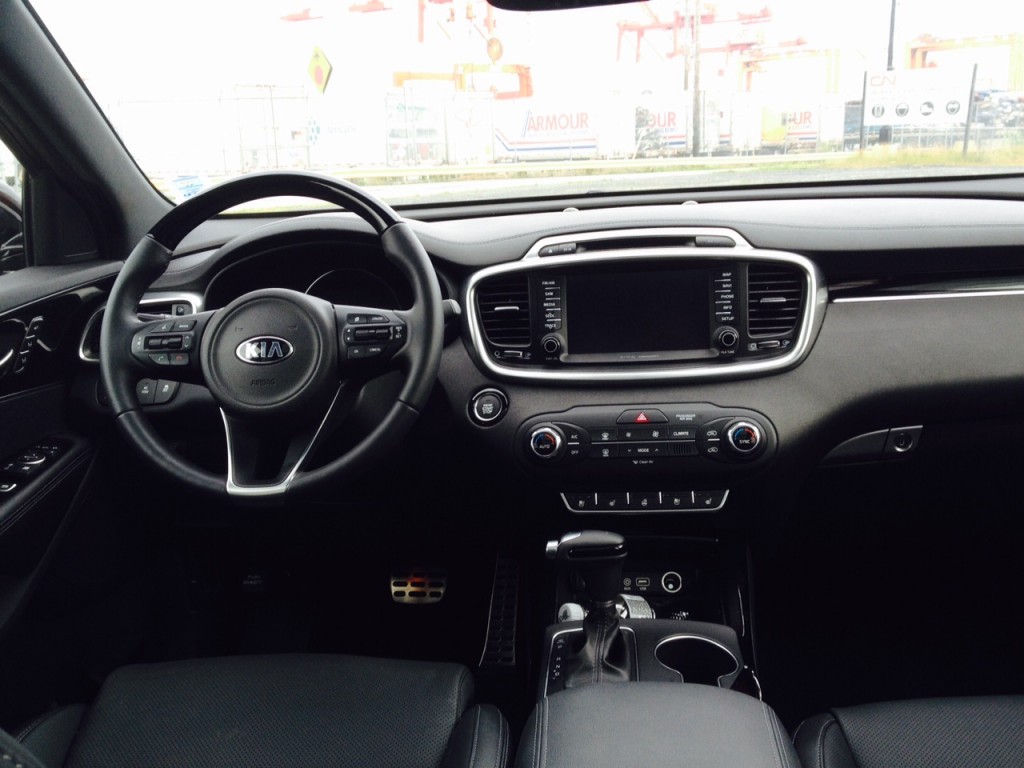 And if you were to take one of the owner’s of those premium vehicles and plop them inside the 2016 Sorento, I would wager they would be rather impressed. Not only is the design and layout well sorted, but the quality of materials match its attractive design. The gauge cluster includes a large LCD screen which houses the speedometer along with relevant information. It will even remind you to align the steering wheel if it is not. Clever feature. My tester was the top trim SX which meant, in true value-conscious Korean automotive fashion, the feature content was plentiful including certain features not offered by its competition such as ventilated front seats. And speaking of the seats, they are quite comfortable. 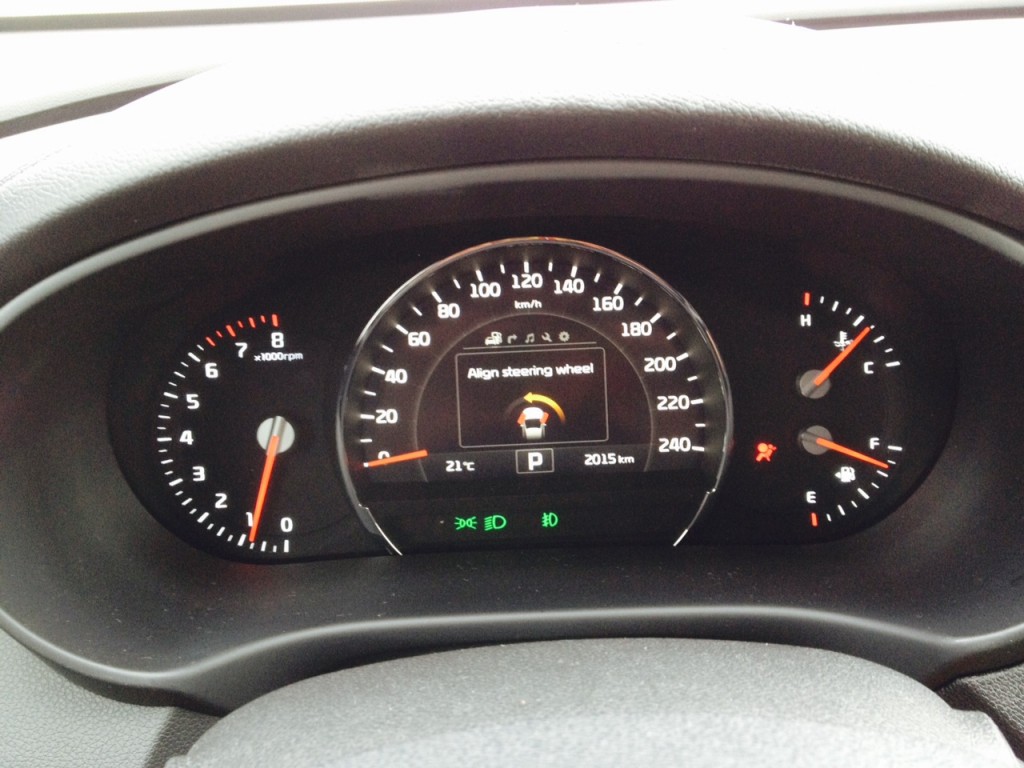 And in true crossover form, cargo and passenger room are as good as you’d expect them to be with most people of any stature likely being able to find a comfortable seating position on the first try. In fact, passenger capacity isn’t necessarily limited to four passengers plus the driver. The Sorento can be equipped with a third row. I was not able to evaluate the third row because, as mentioned, my tester was the turbocharged model and for some inexplicable reason, you cannot equip the turbo’s with a third row. If you’d like the added passenger ability you’ll have to move up to the V6. 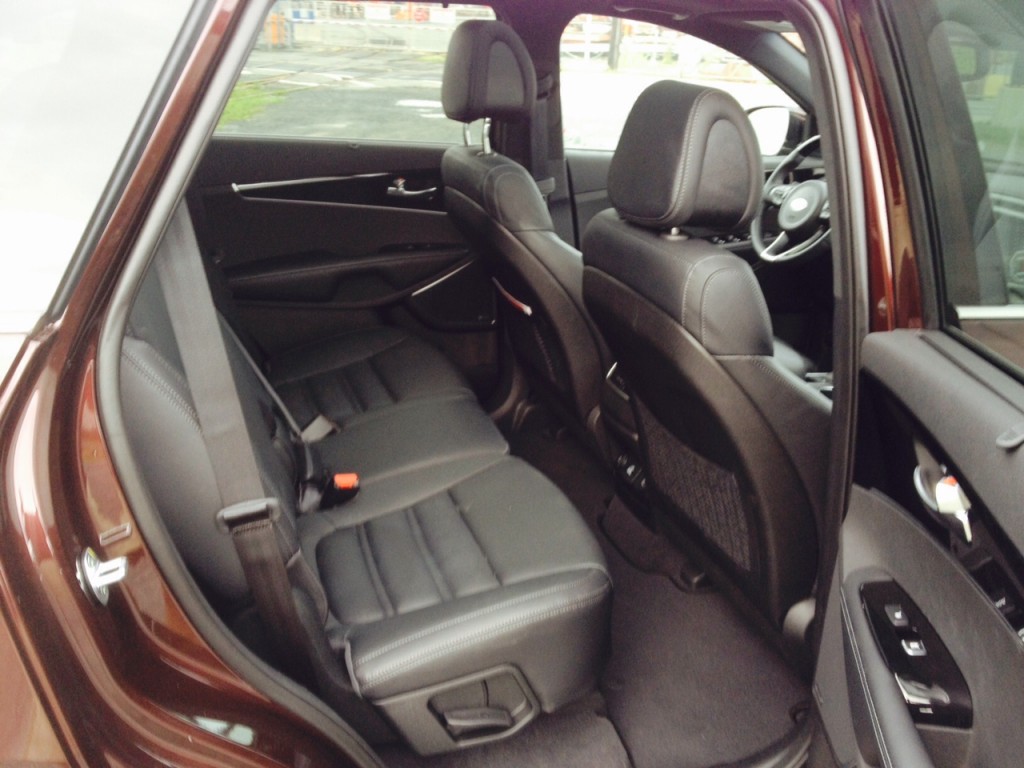 The new 2.0 litre turbo 4-cylinder produces 240 horsepower and 260 pound foot of torque. The end result is a capable engine that can hustle the Sorento out of its own way in a hurry, however that power is not linear. Low end power is almost non-existent, it isn’t until the turbo checks in at mid-range where you feel any sort of oomph. While that is a typical trait for a lot of turbocharged cars it’s something that the Germans, perhaps predictably, have been able to eliminate from most of their turbocharged engines. Another thing the Germans have been able to address in their turbo engines is refinement and quietness. When you push the Sorento, it does make a rather unappealing whine as if it’s struggling, even though it clearly is not. That, and there appears to be an unpleasant clatter when sitting at idle, as my father pointed out. Although to be fair, it was not something I had immediately noticed. 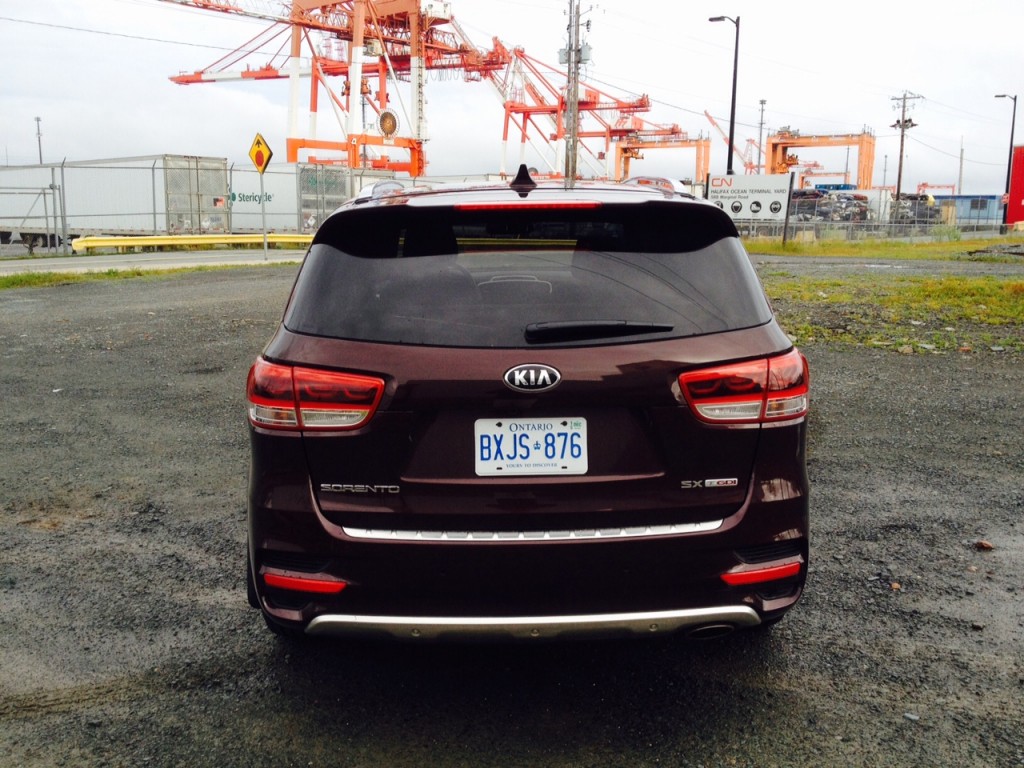 The Sorento isn’t going to produce any uncontrollable smiles in the bends. In fact, I’d wager this new version is now less sporty than the generation before it. The steering is numb with no feedback to the driver whatsoever, and body roll rears its ugly head fairly early on, but none of that really matters. If you’re the type of person that has decided a crossover is for you, chances are you’ve come to terms with the fact that handling will never be quite as good as a hatchback or a wagon. And once you have come to terms with that, then you can start to acknowledge just how good the ride is. It’s fantastic, in fact. It’s comfortable over bumps and cabin noise is minimal (assuming you’re not asking much of the engine). The ride really is reminiscent of a more premium Japanese or American brand (yes, including GM). 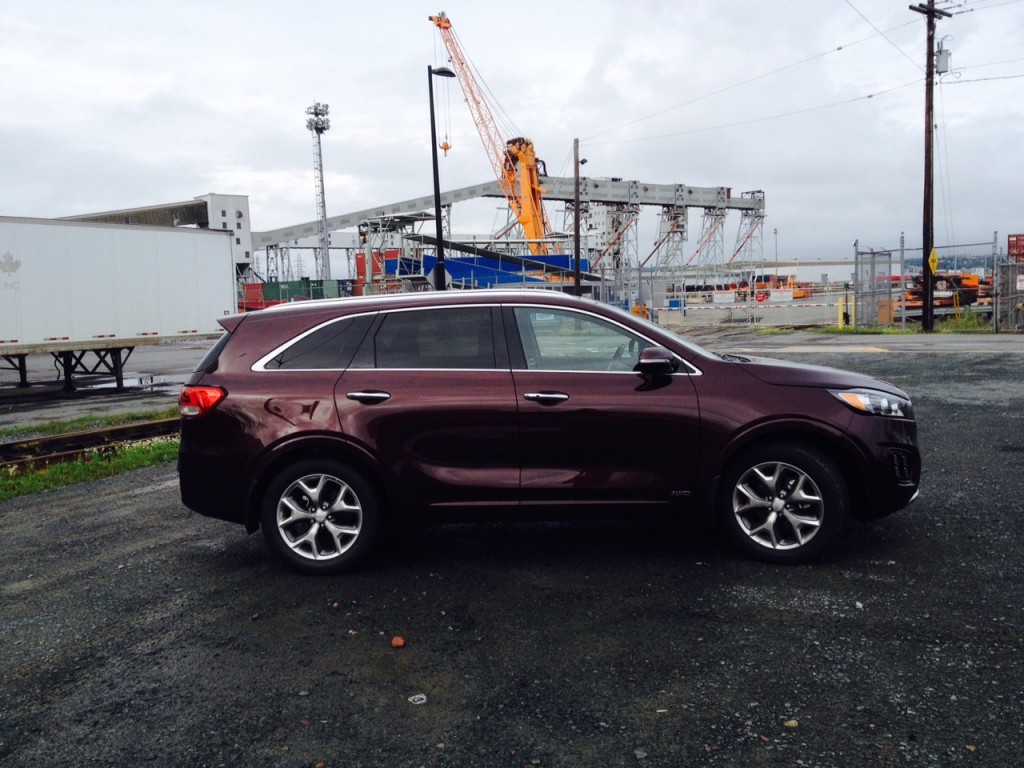 But there’s one thing that really bothered me about the Sorento turbo and that was its fuel consumption numbers. Officially, it’s rated at 12.3 L/100 kms city and 9.3 L/100 kms highway. I averaged, and I kid you not, 15.1 L/100 kms in real world driving. Yes, I’d say 85% of my driving was small trips around the city, however I did take it for a two hour highway drive as well. I noticed during that drive that the fuel figures fell to 12.9 L/100 kms but it climbed back up after a few more days of city driving. Something like this could be forgiven if you were driving a V8 or even a V6, however the whole point of turbocharging is to keep some element of performance without sacrificing fuel efficiency. It seems as though the Sorento was only able to deliver on the former. 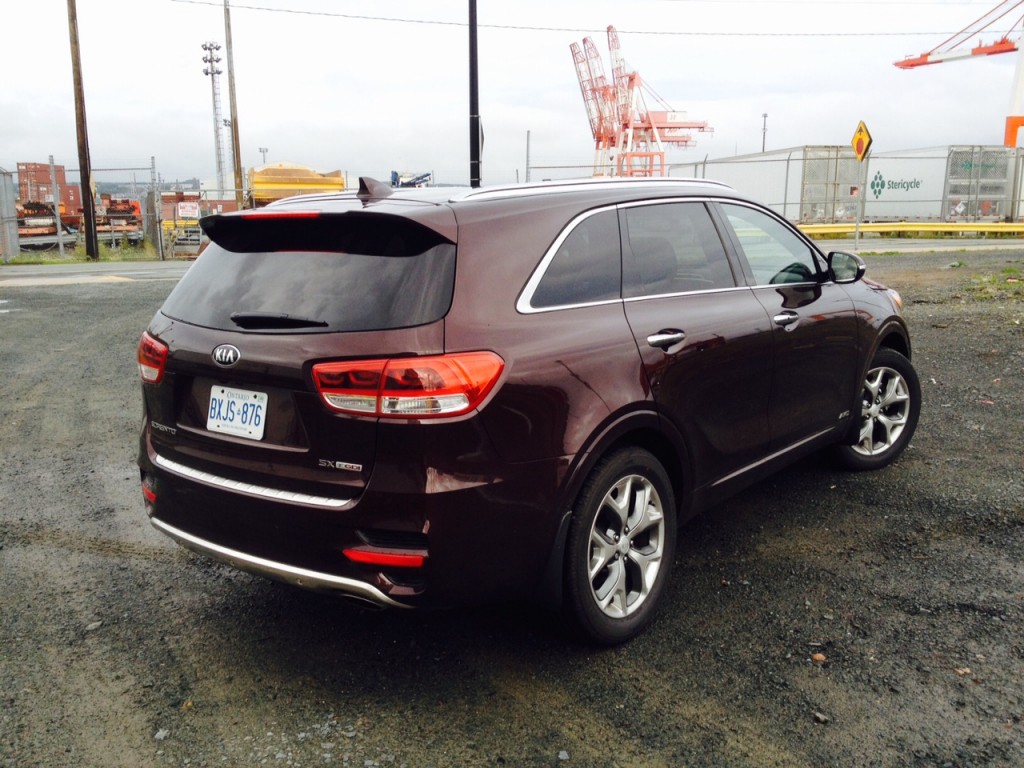 And that does beg the question: if the Sorento is no better on gas than a V6, then why not just get the V6? Not only will it eliminate the whiny-ness and clatter of the four banger, but it also allows you the option of taking the third row if you need it. 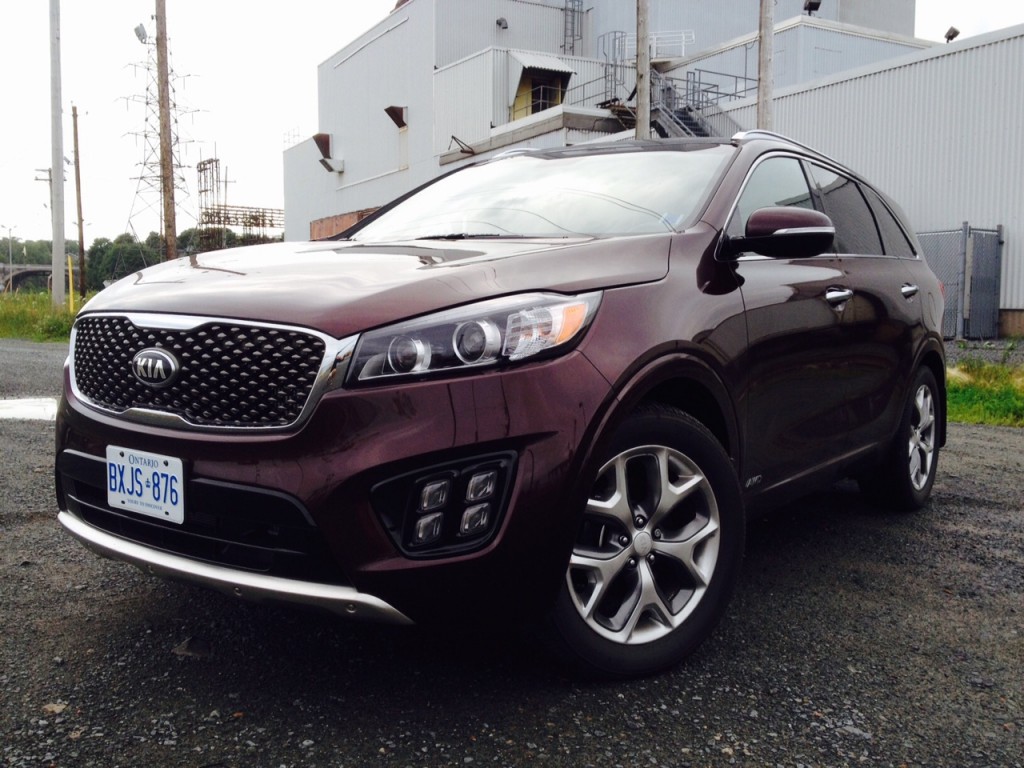 But the real story here is just how capable and well rounded the Sorento has become overall. I’m not a fan of crossovers by any means, but it’s safe to say this one is among the best. It’s just as spacious, and perhaps more spacious than some of its competition, it’s value oriented, it has a great interior with a matching exterior and it is quite versatile. It appears my friend’s realization was an accurate one. The new Sorento is now among the top in the segment. And while it does have a few faults here and there, its an excellent representation of the brand itself. It may very well be one of the best vehicles Kia makes.