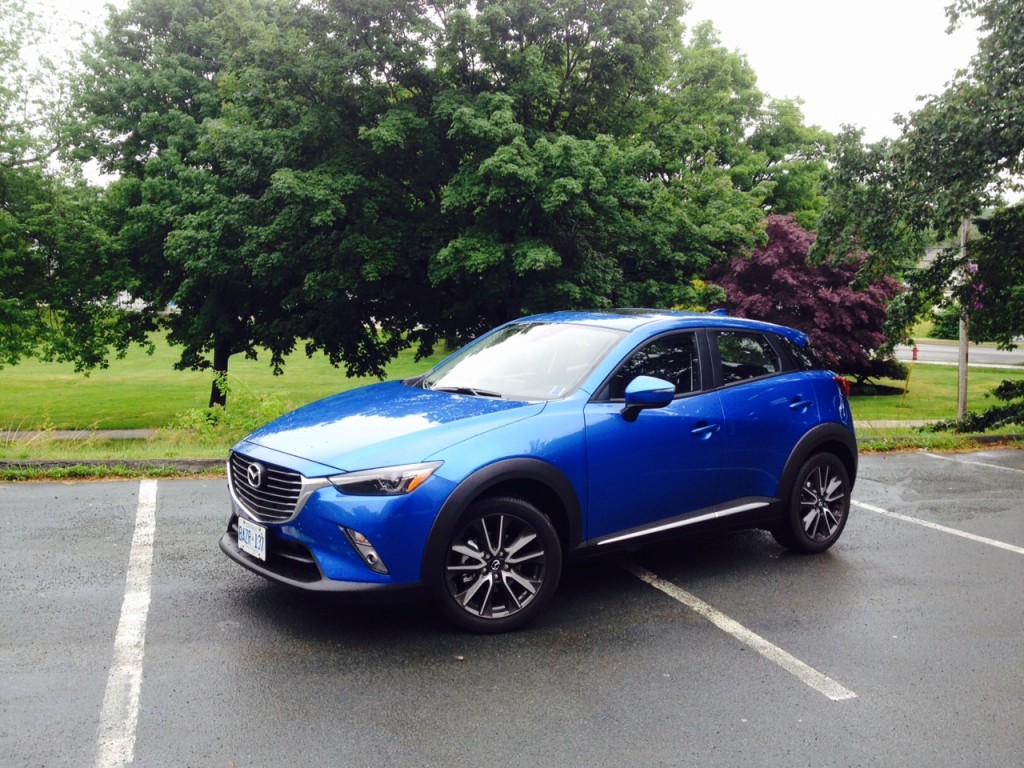 I usually encounter one or two per week, no matter what I’m driving. Whether it’s a all-new model that most have yet to see in the flesh or a rare trim package on a fairly mundane daily driver.

However, whenever I drive a new Mazda, the rubberneckers tend to come out in spades. The same is true for the Mazda CX-3; an all new model for Mazda who is one of many manufacturers jumping on board the hot new ‘compact SUV’ segment.

They’ve incorporated their swooping Kodo design language (fun fact of the day for you, Kodo means Soul of Motion) and it works brilliantly. From its handsome front end, to the floating roof trick at the D-pillar to the large eye-catching wheels and the small rear window. Everything seems to flow brilliantly.

From the moment the CX-3 was delivered to my driveway, the rubbernecking began. And old man walking his dog seemed hypnotized by it, even furious tugs at the leash from Fido could not get him to keep moving. 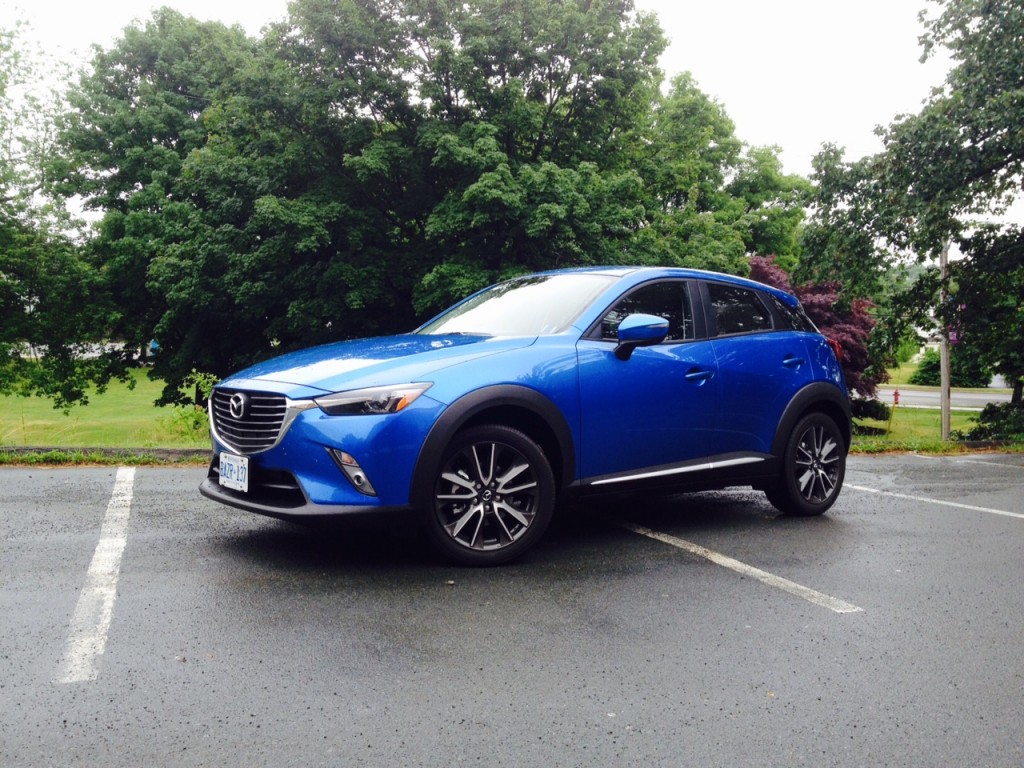 Then there was the Superstore worker (that’s Loblaws to you non-Atlantic Canadians) who seemingly rushed out of the store to stare at it as I drove by, then promptly went back inside to his post.

These examples happened several times a day. In fact, I once came back to the CX-3 to find a note that said “call me” on it with an accompanying number, though I’m not entirely certain that that wasn’t a prank from one of my ridiculous but loving friends.

You would have thought I was driving a LaFerrari or something, but I wasn’t. It was a compact car from a mainstream manufacturer.

Generally, you can count on any car being a winner when it gets this level of attention. It doesn’t really matter how good or bad it is at being a car, if people like what they see, they will buy it. And they are. The CX-3 has only been for sale for three months but sales have increased exponentially over each months.

But can the CX-3 be good anything else besides winning beauty contests? 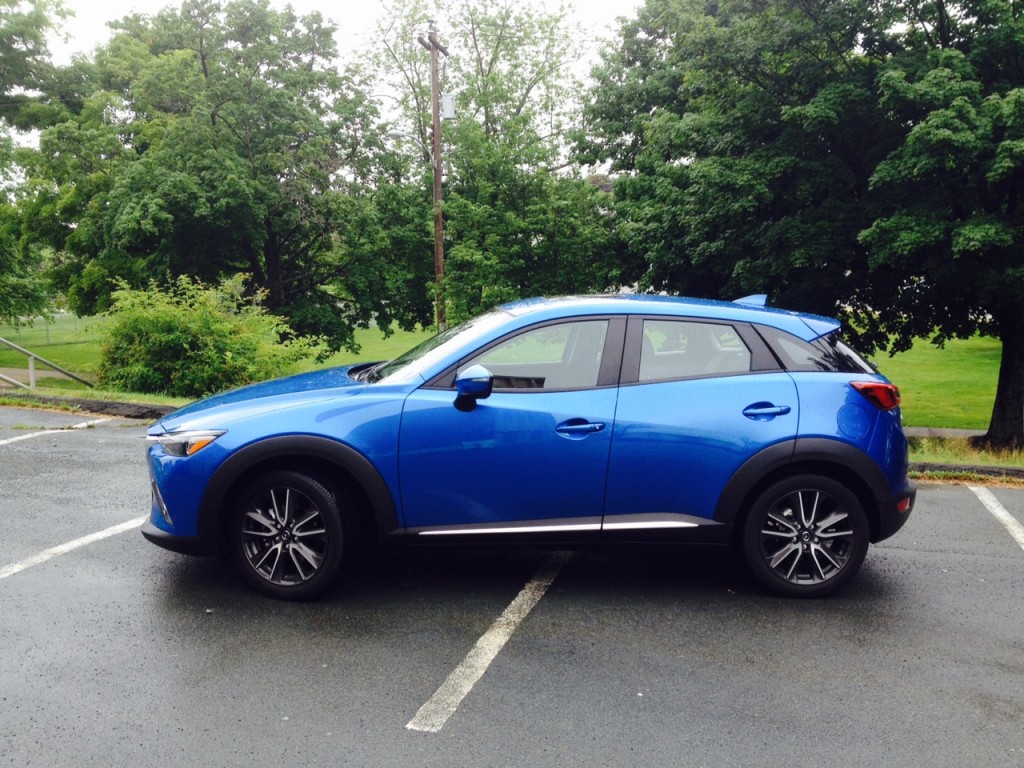 Well, yes. In addition to Mazda’s consistent exterior styling successes, they’ve also come quite close to rivaling interior design, functionality and feel of more premium brands. The centre infotainment screen perched atop the dash comes right out of Mercedes-Benz’s playbook, only somehow Mazda’s version doesn’t look like it was tacked on as an after thought, as is the case with Mercedes. It is operational by a dial located between the two front seats. This was a bit off-putting at first, but I got used to it rather quickly. Mostly everything is controlled through the dial save for the climate control. This creates a neat and tidy dash, but it also means it’s a three step process just to switch the radio station.  The GT model also gets a Head Up Display (HUD) which displays your speed, among other things and is a pretty elusive feature in this class. However, it’s not a traditional HUD. A small piece of clear plastic raises from atop the gauge cluster. Not only does it give the urge to rip the flimsy looking piece of plastic off, but it’s not nearly as good as HUD’s which display directly on the windshield. To be honest, I barely used it. 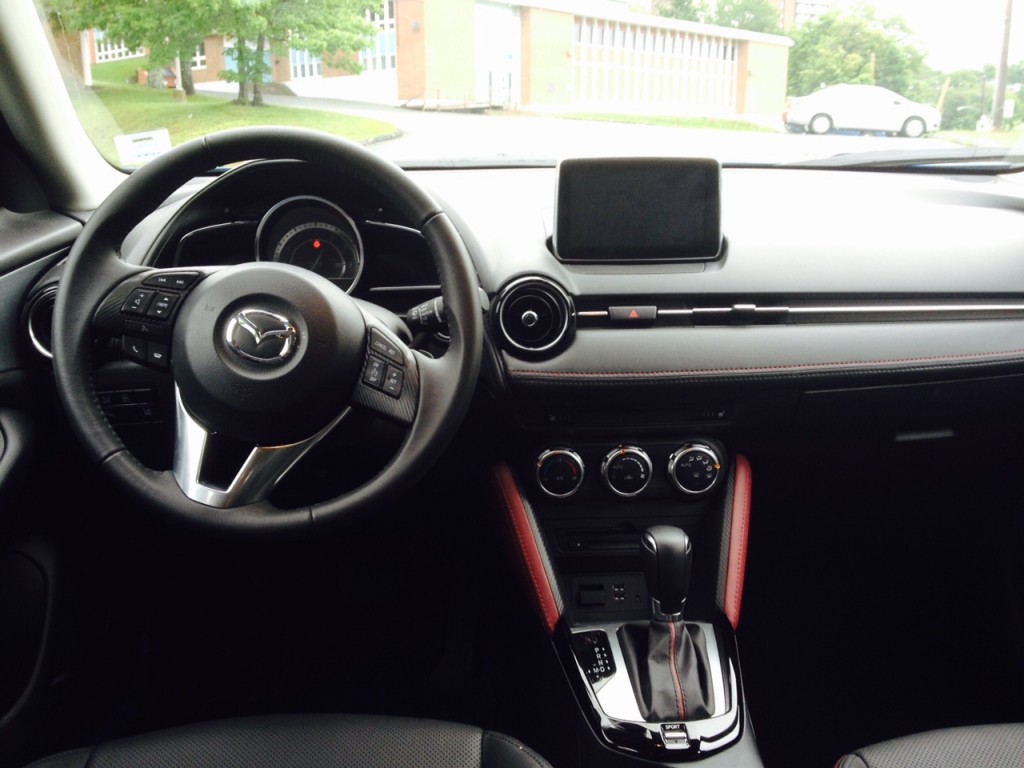 The feel of materials are of high quality, but the red inlays over black which don’t match my tester’s Dynamic Blue Mica paint bringing it short of being almost completely on par with premium brands. The seats are supportive and comfortable, however rear seat leg room is a bit of a squeeze. I’d wager the rear seats in the Mazda3 offer a bit more room. That could be because the CX-3 is based on the smaller Mazda2. Cargo room is adequate for most city driving, but for any long roads trips the rear seats may have to be sacrificed and folded down to provide more room. 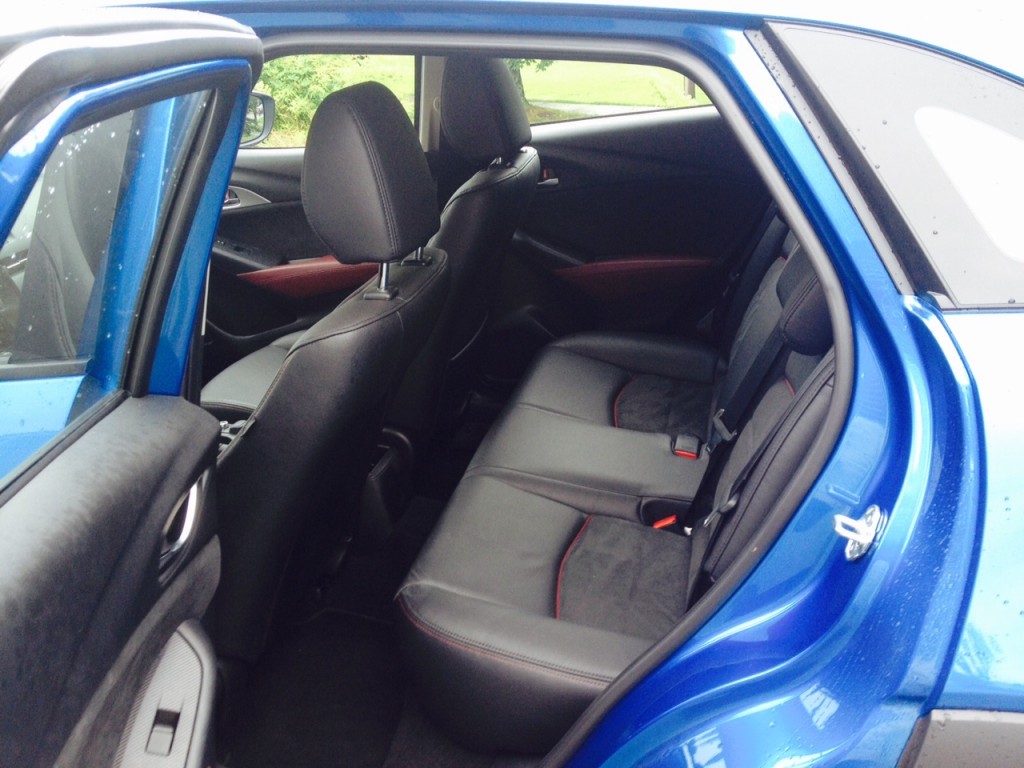 Powering the CX-3 a 2.0 litre 4-cylinder which is good enough for 146 horsepower and 146 pound feet of torque. Those may seem like low numbers, especially from the former ‘zoom-zoom’ brand turned ‘driving matters’ brand, but feeling as though the CX-3 was underpowered was a rarity. That feeling especially faded when you hit the sport button, which allows more throttle input and tells the six-speed automatic to allow more revs. Speaking of the six-speed automatic, it’s the only transmission available on the CX-3. Mazda claims they are trying to make the case for adding a manual option down the road, however that may be a futile fight since demand for manual transmissions, for some inane reason, has decreased steadily over the years. But back to the engine. It’s a great engine in the sense that it can make good use of the relatively small power figures, however it is a bit intrusive noise-wise. At idle, it clatters about like a diesel. Some refinement would really go a long way to making it a rather tremendous engine. 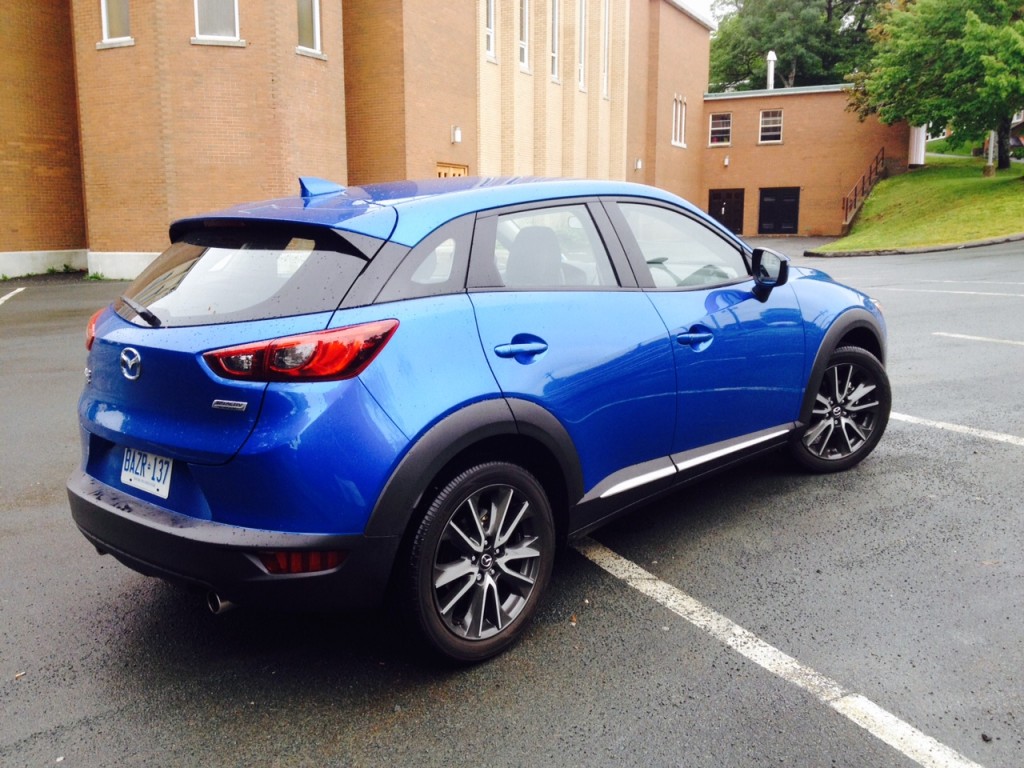 The CX-3′s all-wheel drive system incorporates the Haldex philosophy, that is, it keeps the car in front-wheel drive until slippage is detected when it then sends power to the rear wheels to help out with traction. I had the chance to take the CX-3 through a large mud puddle and the CX-3 confidently got itself loose. In fact, Mazda claims their all-wheel drive system is so good that it rivals Subaru’s all-wheel system, which continuously sends power 50/50 to all four wheels and is largely considered to be among the best in the industry. I’ll have to take my next Subaru to the same mud puddle to test out that claim. 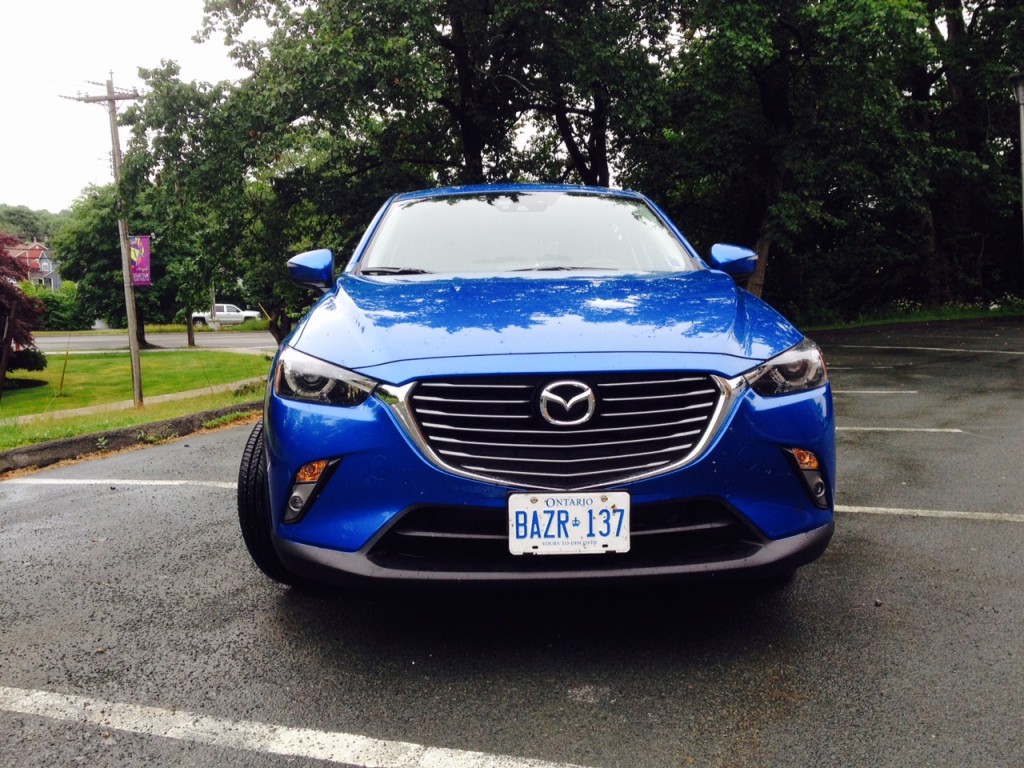 Mazda’s claim to great handling vehicles cannot be disputed however and the CX-3 is no exception. Milling about around town is a synch and maneuvering around side streets and construction zones can actually bring a smile to your face. I do wish Mazda had dialed in a bit more steering feel to the driver, but overall it’s still fairly accurate making the CX-3 a poised little city driver. It wouldn’t be out of place to crown it the performance king of all the compact SUV’s so far. 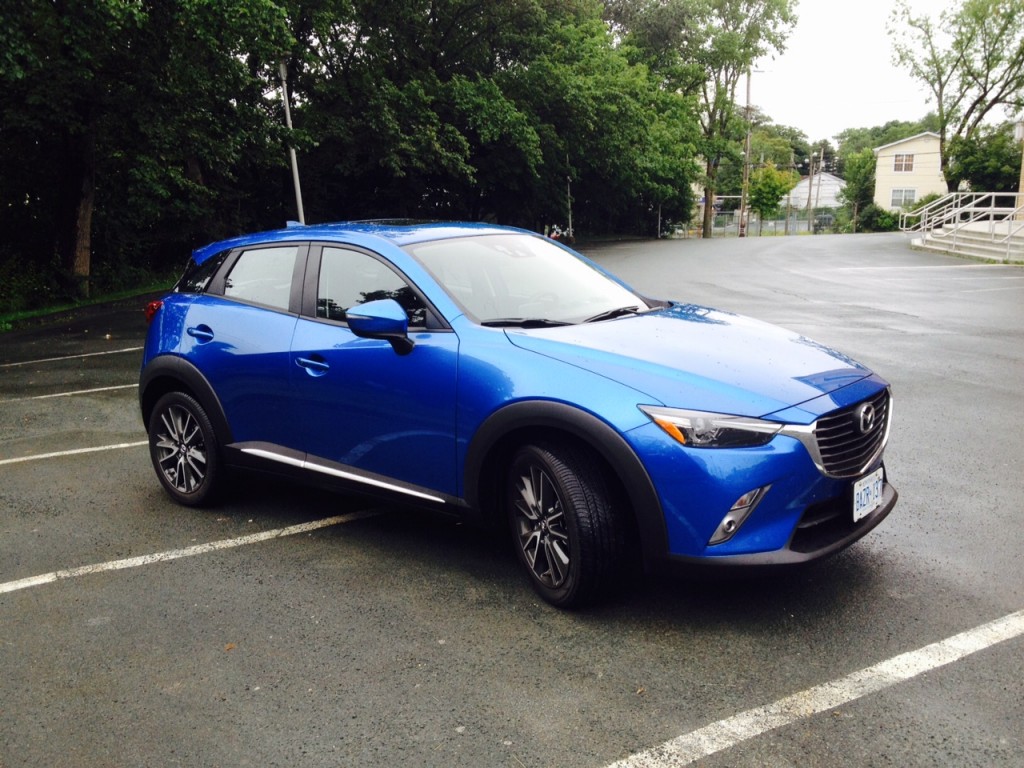 As much time as Mazda has put into most of their models in terms of performance, they’ve dedicated the same amount of time making them as efficient as possible without the use of hybrid systems, electric motors or diesel engines, though the latter has been rumoured to find its way into the Mazda6. Then again, that rumour is several years old now with no indication of being true in sight. Therefore, Mazda relies on tuning the old tried, tested and true internal combustion engine for both performance and efficiency. The end result for the CX-3 is a rating of 9.1 L/100 kms city and 6.9 L/100 kms city for all-wheel drive models. Front-wheel drive models gets slightly better fuel consumption numbers. I returned 8.9 L/100 kms in mostly city driving. The CX-3 takes regular fuel. 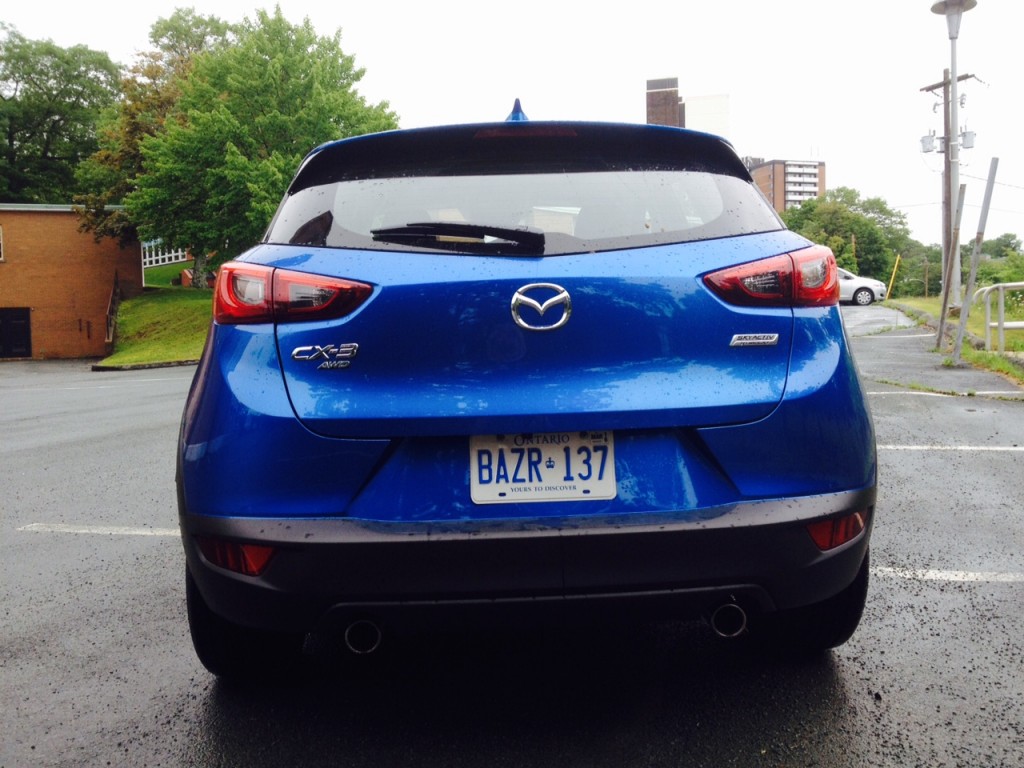 But there’s no mistaking the CX-3 as a regular car. It’s a looker, has a great interior, can perform like the dickens and it won’t guzzle all the costly fuel you bought for it. Save for come compromises in space, the CX-3 is certainly a winner and it provides an option for the Mazda2 or Mazda3 buyer that wants all-wheel drive. But really, who cares? Rubberneckers won’t be impressed with any of that, they’ll just stare at the car uncomfortably until you’re forced to drive away to get away from them.

Seriously guys, it’s not a Ferrari! 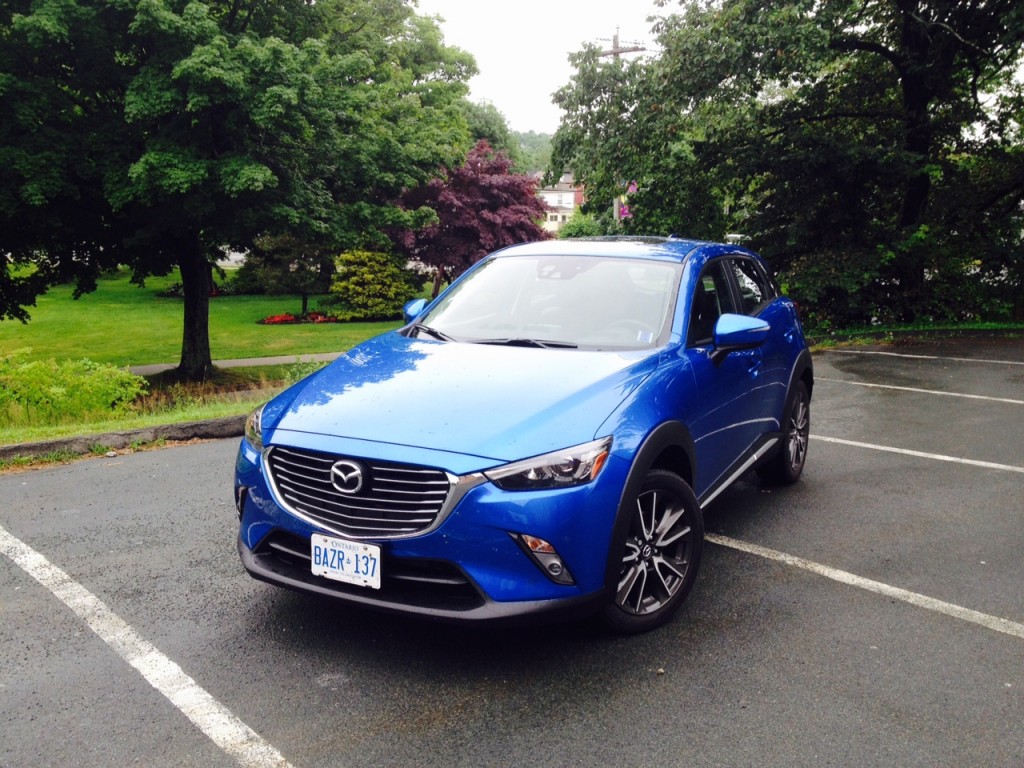