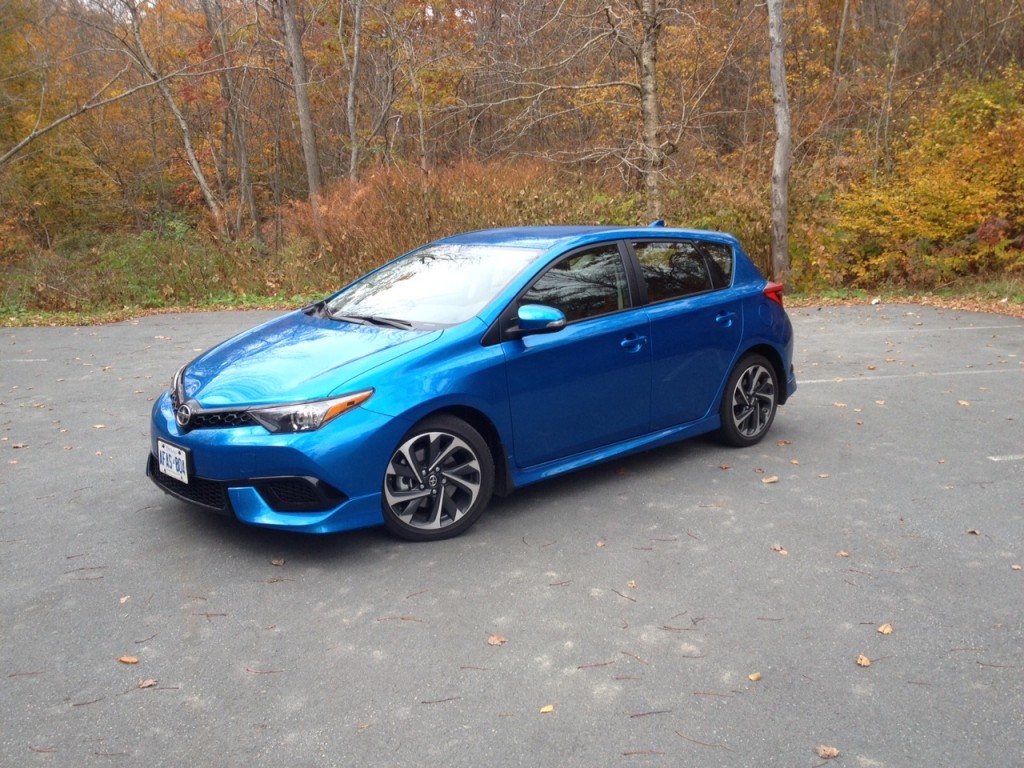 I have a confession to make: I’ve never reviewed any product from Scion before. Ever.

Before you spit your coffee out at the thought of my never having experienced the FR-S, don’t worry, I have in a sense because I’ve driven the Subaru BRZ before which is, for all intents and purposes, the exact same car.

To clarify, the reason for not having experienced any Scion product has nothing to do with my personal opinion of the brand. After all, Scion supposedly markets their product to people like me – generation Y – but save for the FR-S, I’ve never felt compelled to walk into a dealership and Toyota doesn’t often send Scion press cars this way.

So I was pretty excited when I found out that I would get some seat time in Scion’s latest creation: the iM.

The real question here is, given Scion’s targeted marketing strategy towards young adults and given the fact that Toyota killed off their only hatchback in our very hatchback centric market, does the iM fit the bill? Will it satisfy both young Scion customers and more seasoned Toyota customers? 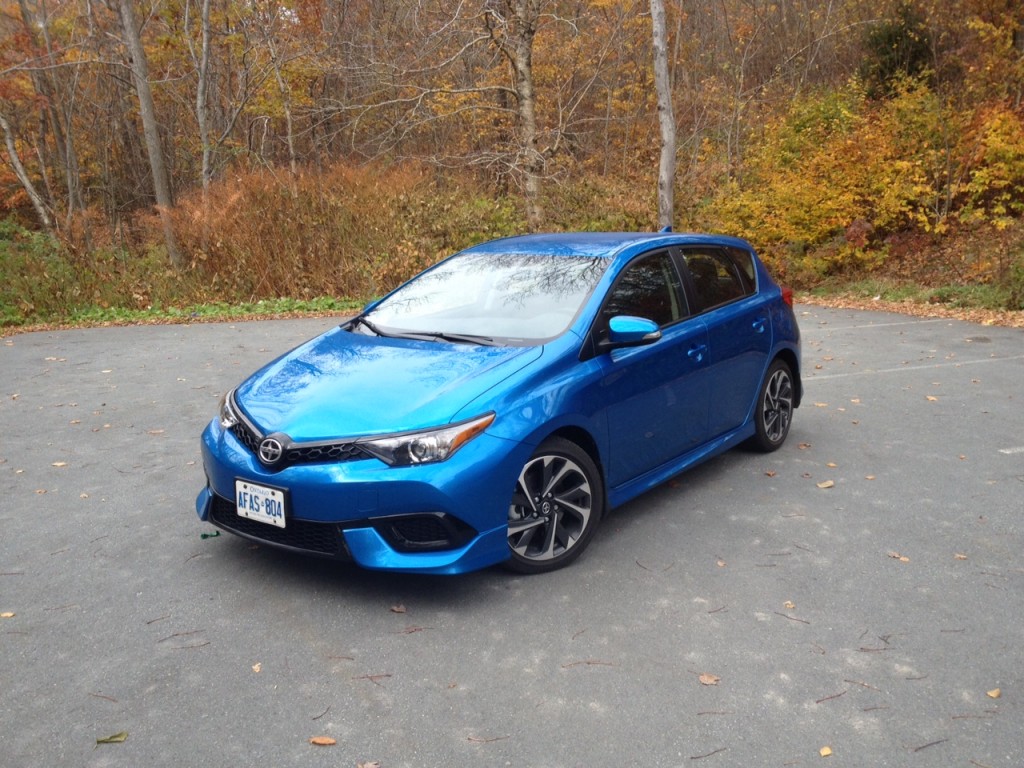 The iM is actually based on the Toyota Auris; a hatchback sold in other global markets. When Toyota announced they would bring the Auris over and badge it as a Scion, car nuts rightfully got excited. Even though the run-of-the-mill Auris probably isn’t anything to get excited about in Europe, any European car that finds its way to our shores is always exciting for us because the Europeans tend to have a higher standard for, well, everything while us North Americans tend to accept conventional, bland and boring cars. 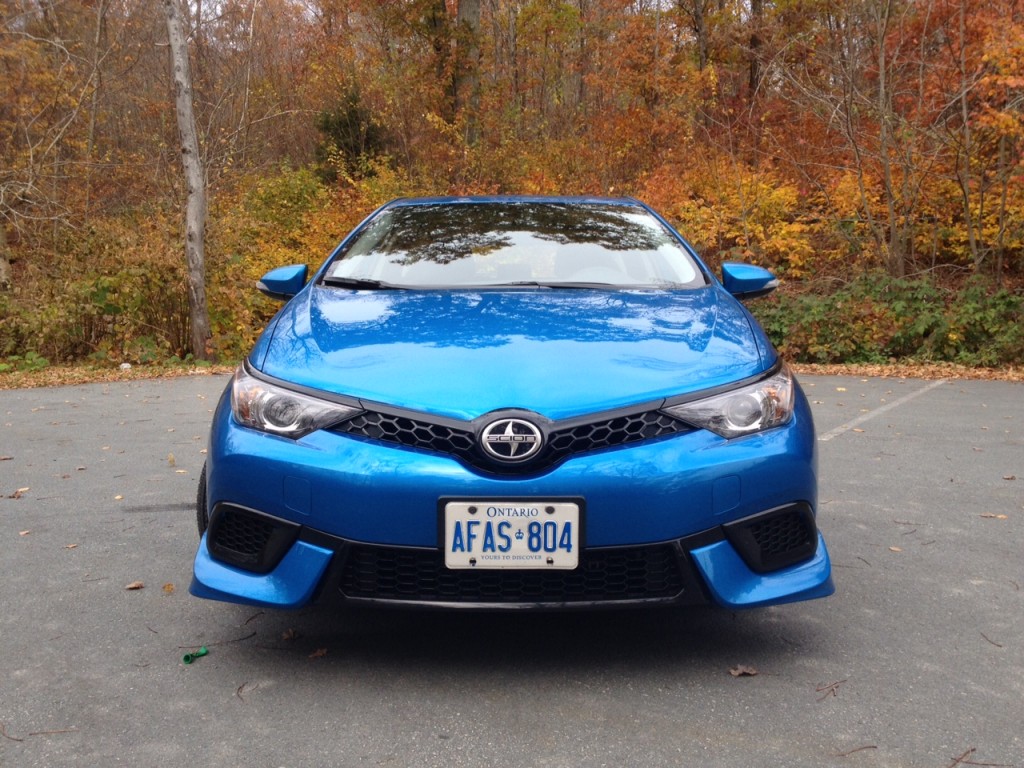 At the Canadian International Auto Show in Toronto last year, Scion debuted the iM ‘concept’ which was essentially an Auris with Scion badges along with over exaggerated wheel arches and massive wheels. I got excited that Toyota hadn’t messed with the design too much. But being a concept, it stood to reason that the car wouldn’t look exactly as presented. And the production version didn’t. When I first saw it, I was disappointed having still had the Auris concept in mind but now that I’ve been able to see it in person, it actually looks quite good. Stand out good, even. Especially in my tester’s Electric Storm Blue paint. The 17-inch wheels fit the youthful part as does the side skirting (though I’m not much of a fan of it) and black gloss trim on the thin grille opening. The iM also gets LED daytime running lights along with LED tail lights, projector halogen headlights, mirrors that can automatically fold in, and a touchscreen infotainment system. 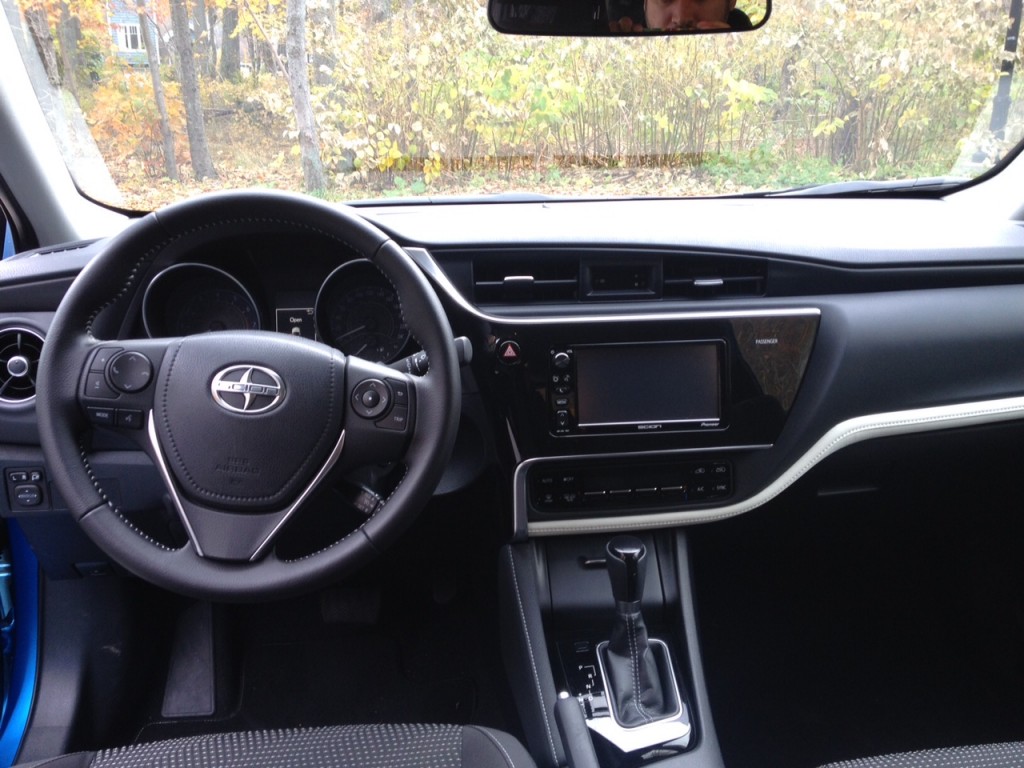 If you’re a regular reader of Car Driven, you’ve likely picked up on the fact that most of the press cars that get reviewed are decked out to the nines by the manufacturer. Some manufacturers spec out the press cars with every option imaginable in the hopes of impressing the journalists with features, the latest tech etc. But the fact of the matter is, very few buyers check off every single option when buying. In fact, some find the process of optioning out a car, or finding the right package that first their needs quite stressful. 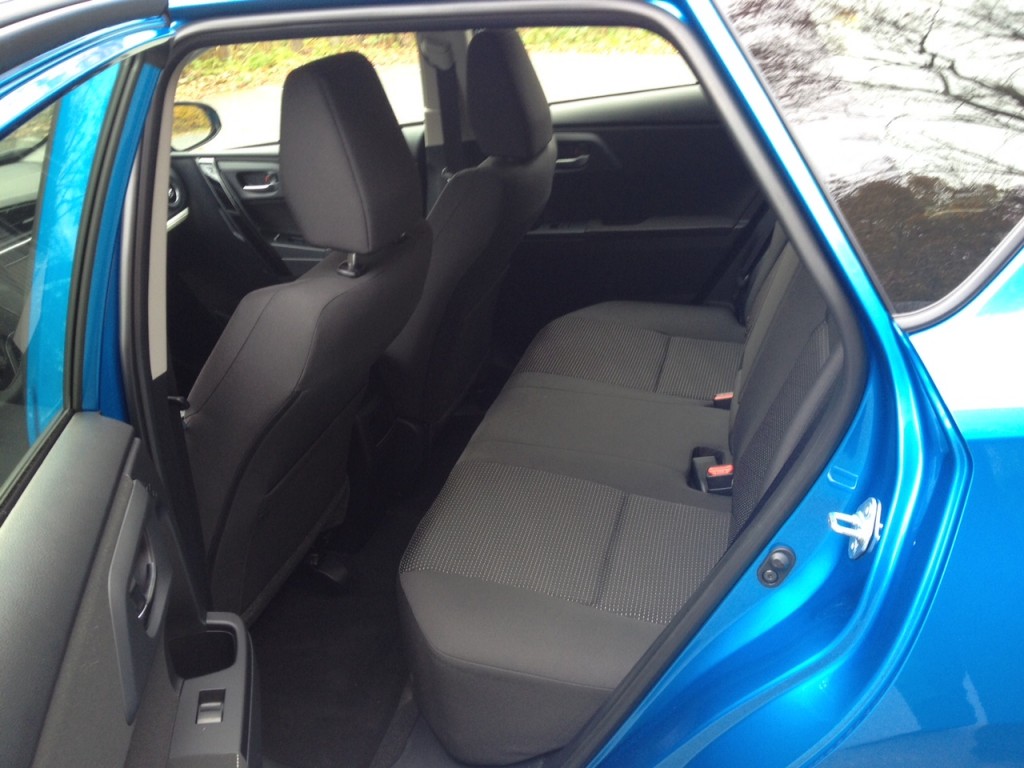 That’s another part of Scion’s marketing strategy. Generation Y apparently has a lot more things to stress about than purchasing a car so Scion made it easier. What you see is what you get. In other words, there are no options to be had on the iM. Well truthfully there are, but you only need to stress about choosing from two: the transmission and the colour. That’s it. In my tester, those options came in the form of the aforementioned Electric Storm blue and the continuously variable transmission (CVT). A six-speed manual is available. It’s in interesting idea to limit option choices, especially since I think most people would like to at least have the option of a sunroof or, especially in Canada, heated seats but both are not available. 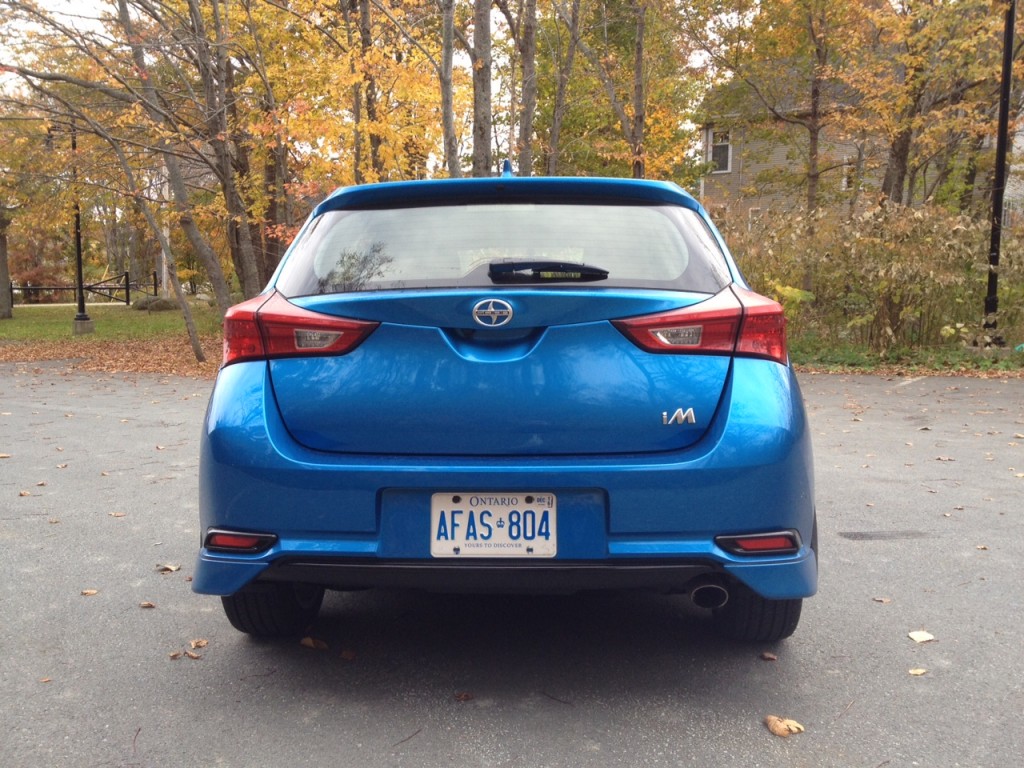 If you’ve ever stepped foot in the latest generation Corolla then the interior should feel familiar to you. The black gloss centre stack looks tasteful and everything is fairly straight forward. The infotainment system is equally straight forward and does a decent job at responding to commands but the buttons within the screen are on the small side. As a result you might find yourself hitting two options at once or an option you didn’t mean to hit. Overall the iM feels of typical Toyota quality which is to say it won’t blow you away with luxury, but it’s all likely to last without too many issues. 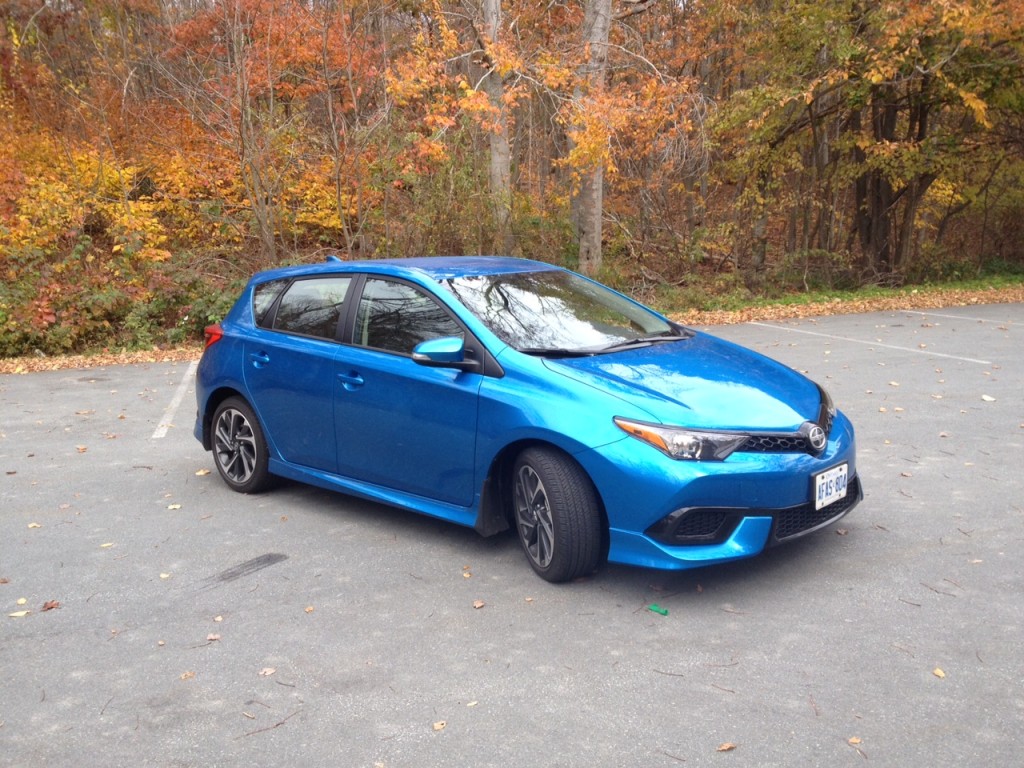 The seats are manually adjustable and actually provide decent support along with decent comfort. The wheel can both tilt and telescope making the perfect driving position fairly easy to find. Leg room isn’t too much or a problem for rear seat passengers, ditto for head and shoulder room, though I wouldn’t want to be relegated to the middle seat where those of us with broad shoulders may feel a bit like a sardine in a can. Cargo room is adequate at 20.8 cubic feet besting the Mazda3 sport, but the Volkswagen Golf has more room. 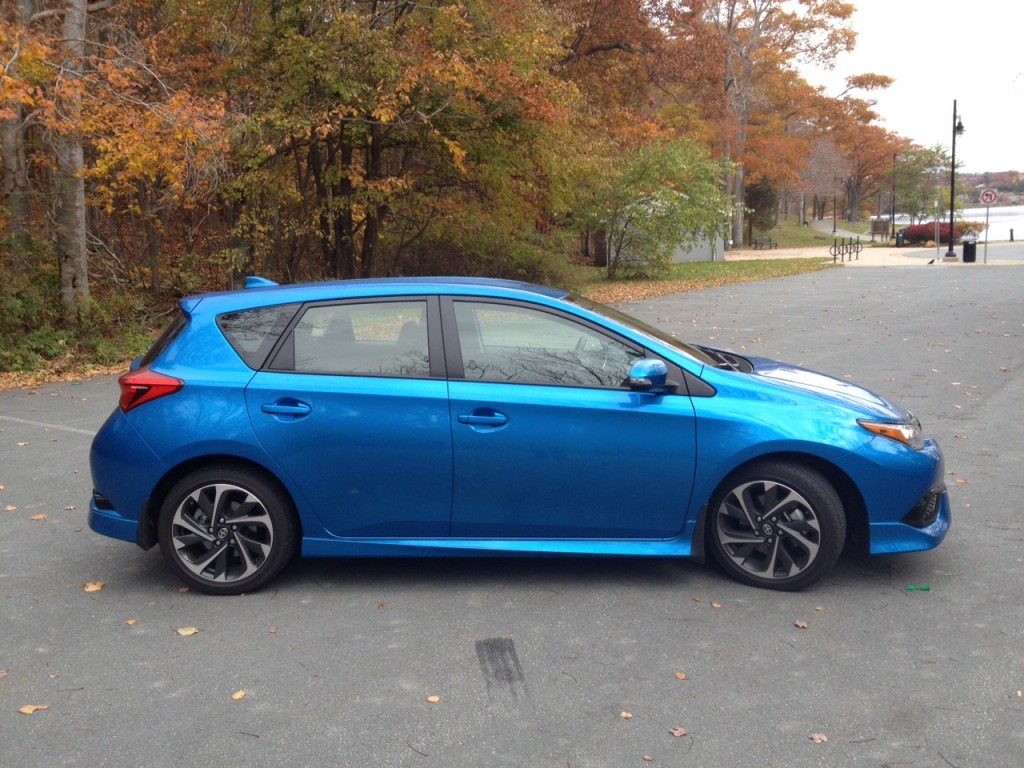 Under the hood you’ll find the same engine found in the Corolla: a 1.8 litre four cylinder which churns out 137 horsepower and 126 pound feet of torque. As mentioned, my tester had the optional CVT which has simulated gears up to seven. Since a CVT’s mission in life is save as much gas as possible, my Scion isn’t exactly a sprinter off the line. With that said, as far as CVT’s go, this certainly isn’t the worst I’ve ever experienced. A bit more low end torque would be appreciated but for most this engine/transmission combo should do just fine. 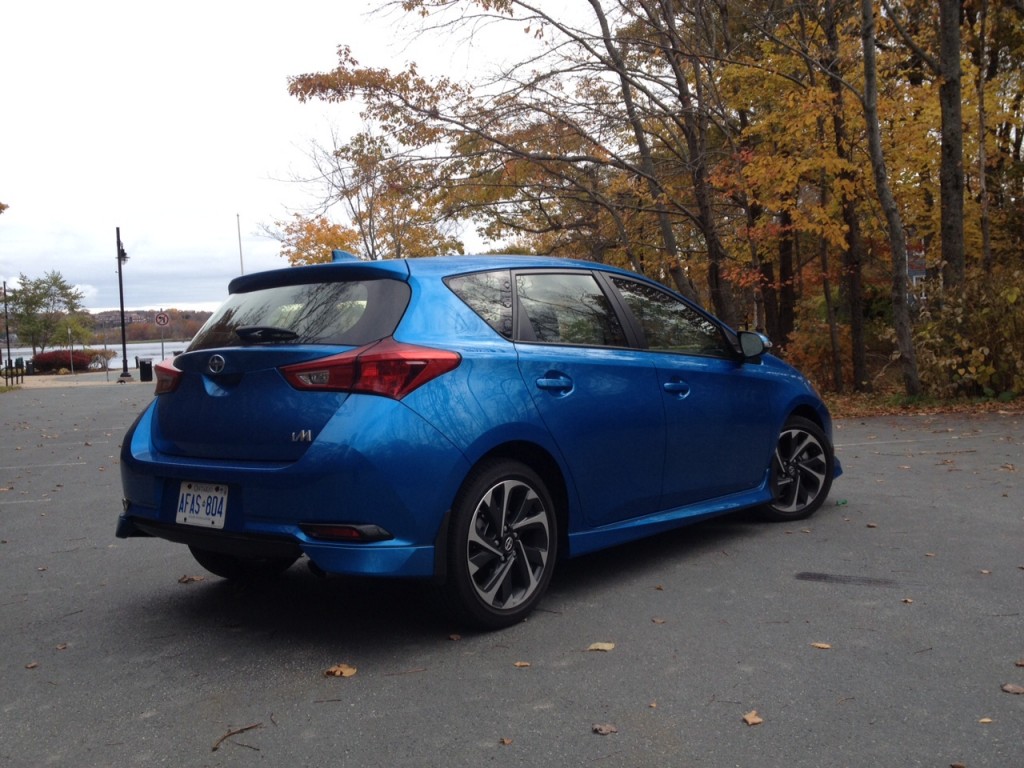 Aside from its looks, there doesn’t seem to be a whole lot that separates the iM from the Corolla as there are a lot of similarities. But here’s where they are completely dissimilar. The iM has an unexpectedly decent amount of handling ability. That is very un-Corolla like and is likely where the Auris DNA can be found. It’s poised and sharp in the corners, so much so, that it may be the first in the class to genuinely give the Mazda3 a run for its money in this area. I actually had a good amount of fun with it which was really only ruined by the CVT. The simulated gears offered a bit more lenience from the gas nanny, but I can’t help but think how much more fun to drive this car would be with a six-speed manual. In other words, get the six-speed manual. 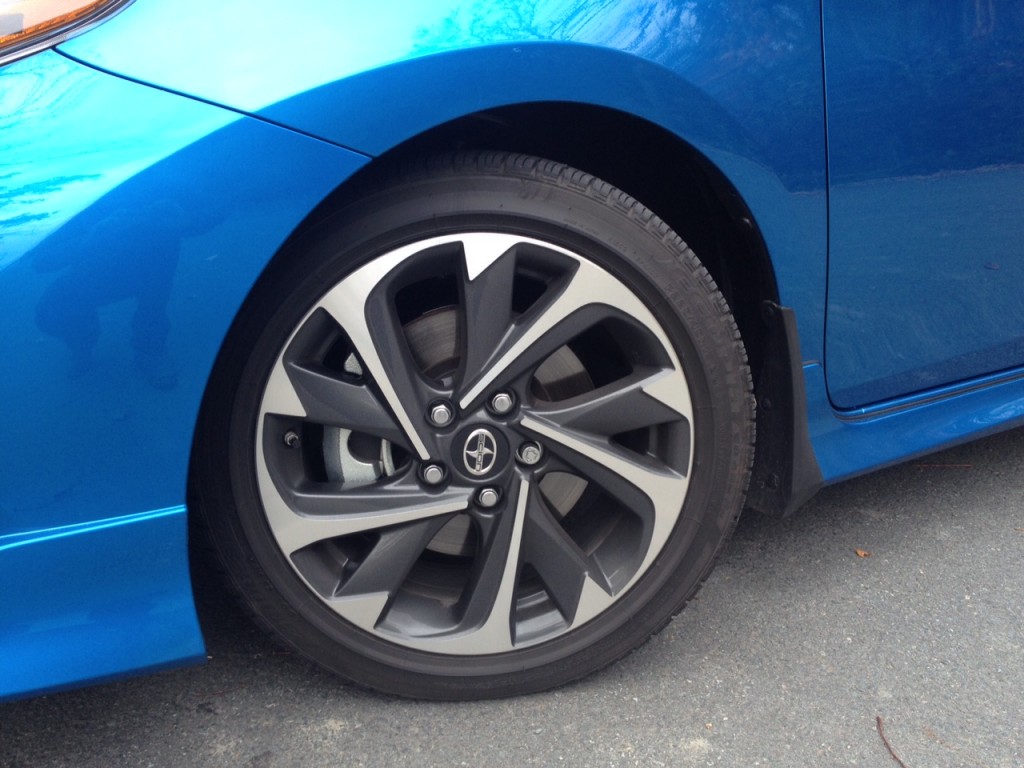 Especially because the CVT didn’t really hold up its end of the bargain in terms of fuel consumption. The Scion with the CVT is rated at 8.3 L/100 kms city and 6.3 L/100 kms highway. My real world fuel consumption came in at 9.1 L/100 kms by the end of the week. Granted it was mostly city driving, but that’s fairly far off from the official numbers. But that just makes more of a case to opt for the six-speed. 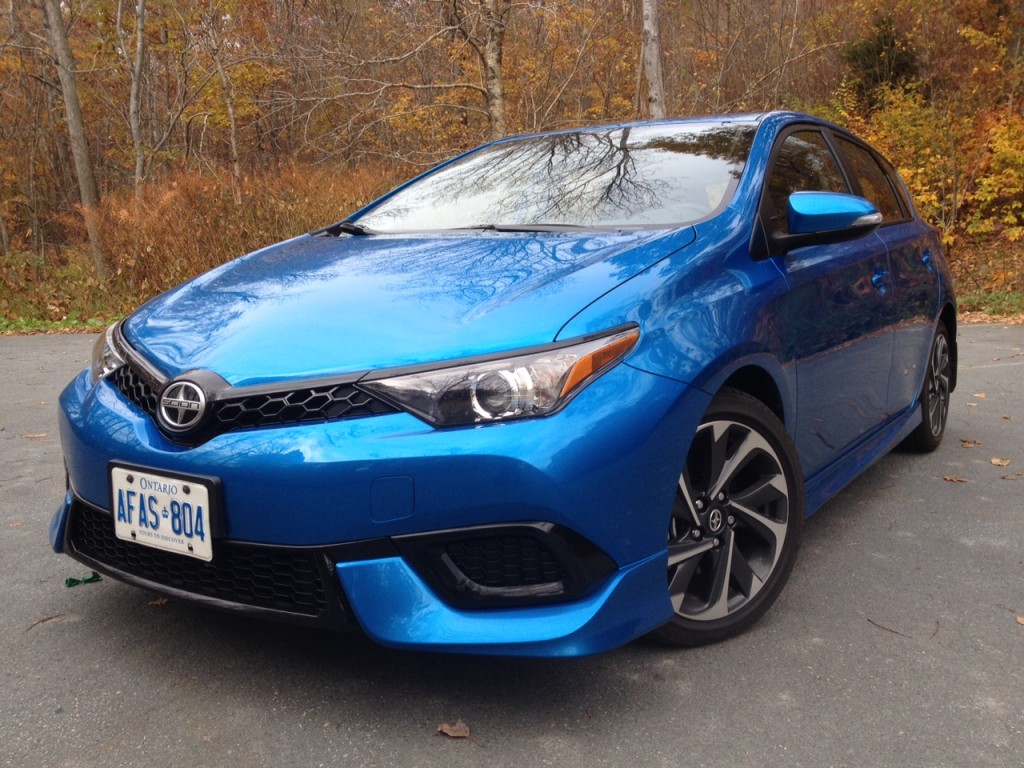 I have to say, my first real experience in a Scion is not only a positive one but a surprising one. I love it when a car surprises me in a good way. I was expecting to drive what I thought was essentially a Corolla hatchback and in a lot of ways it is, but in the more crucial ways it isn’t. It’s a pleasant surprise that, when equipped with the right transmission, could give the ride/handling leaders in the segment a run for their money.