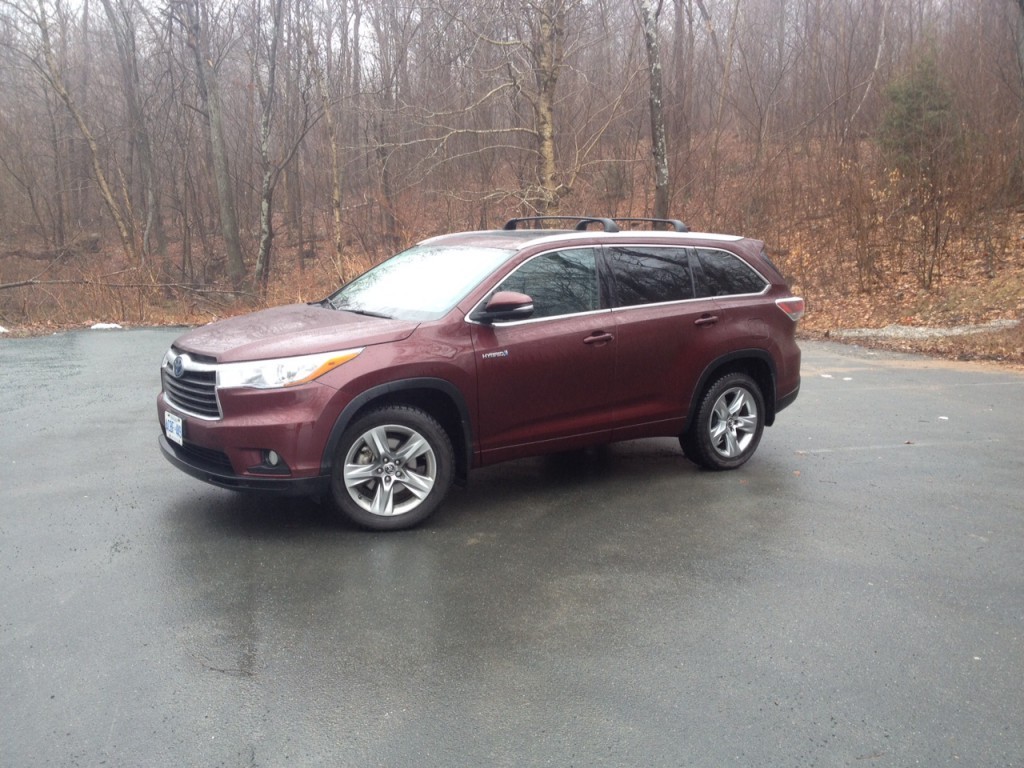 When people think Toyota they tend to think reliability, but of late it seems people are associating another word with the popular Japanese make: hybrids.

Toyota of course started off the hybrid craze with the original Prius back in 1997. Since then, its popularity has spawned two more versions of the Prius in the form of the C and the V in addition to a plug-in variant.

The Prius as a brand has done so well for Toyota they figured they might as well try hybridizing some of their regular old faithful such as the Camry and just recently the RAV4.

While the latter is currently the biggest version there has ever been, there are some who still want more space and more luxury to go along with it.

That’s where the Highlander hybrid steps in and in a way, it has a bit of a taunting task. How do you incorporate Lexus-levels of luxury without cannibalizing Lexus sales all while giving this big vehicle the efficiency that Toyota customers expect from a hybrid?

Toyota has been working on their Highlander hybrid for years now and the latest version visited Car Driven’s garage for a week. So, how did it stack up? 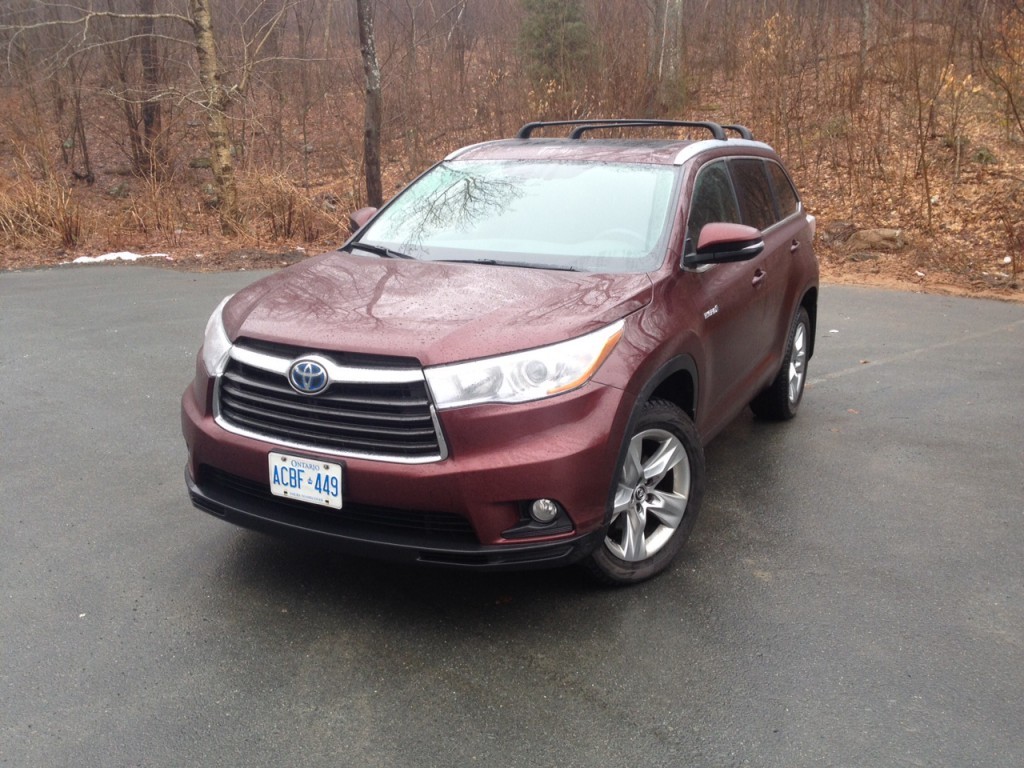 Visually the Highlander is a handsome SUV with its large grille and low roofline. When comparing the hybrid to the regular combustion engine version there very little that sets them apart visually. Only hybrid badging and a blue hue around the Toyota symbol reveals that there is an electric motor under the hood. For some that is absolutely perfect as they don’t wish to appear too showy in their attempt to curb climate change. Though with others, they like to have the spotlight on them to let others know how much they are doing their part. Personally, I’m not bothered either way but what does bother me is the lack of visual cues for a vehicle in this price bracket such as HID headlights, LED daytime running lights or tail lights or extra sparkly tricoat paint.

With that being said, Toyota seems to have addressed the need to upgrade the visual cues with a facelift to the 2017 version. 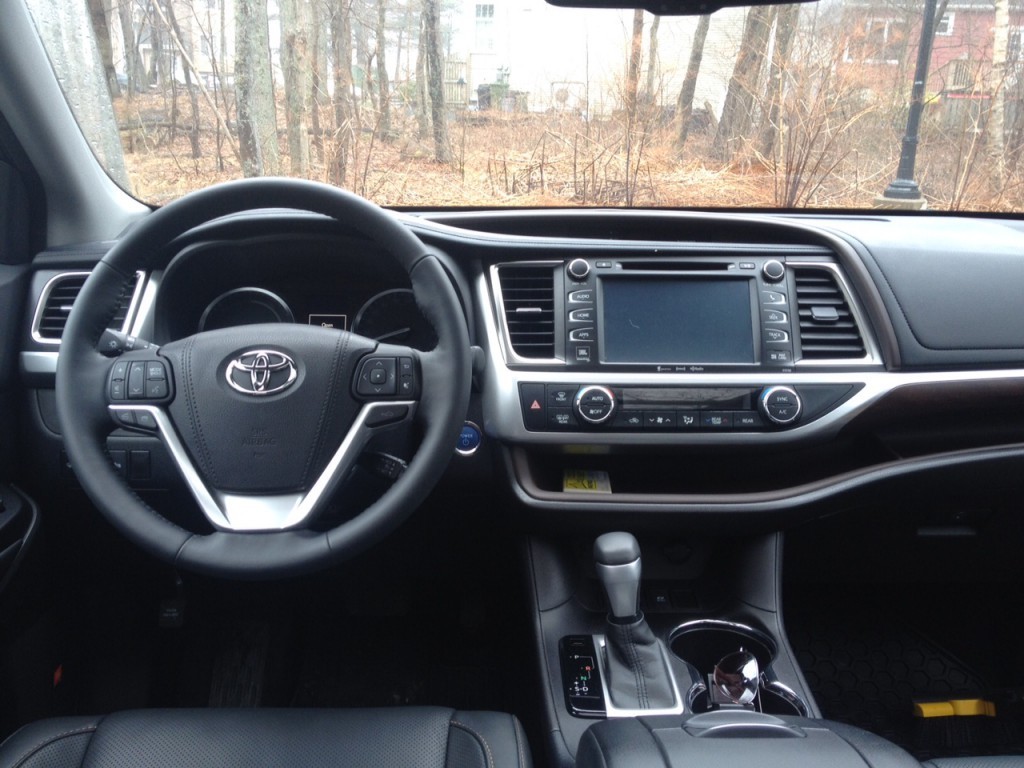 Inside, within this top trim Limited model, you’ll find high quality materials befitted of a Lexus matched with a really nicely designed centre stack which flows nicely into the passenger’s side. Beneath it is a clever tray which also extends to the passenger’s side and it allows you to store anything from your sunglasses, to your lip stick to your wallet.

The screen itself is a decent size and is fairly clear, however it is placed a little bit high making it a bit difficult to reach from the driver’s seat. Here you’ll also find your rear back up camera and rear cross traffic alert. Below you’ll find the rest of your basic controls in a logically laid out manner such as heated and cooled seats and dual zone climate control. Rear seat passengers also get their own climate control however it can be turned off or on at the touch of a button from the driver’s seat. 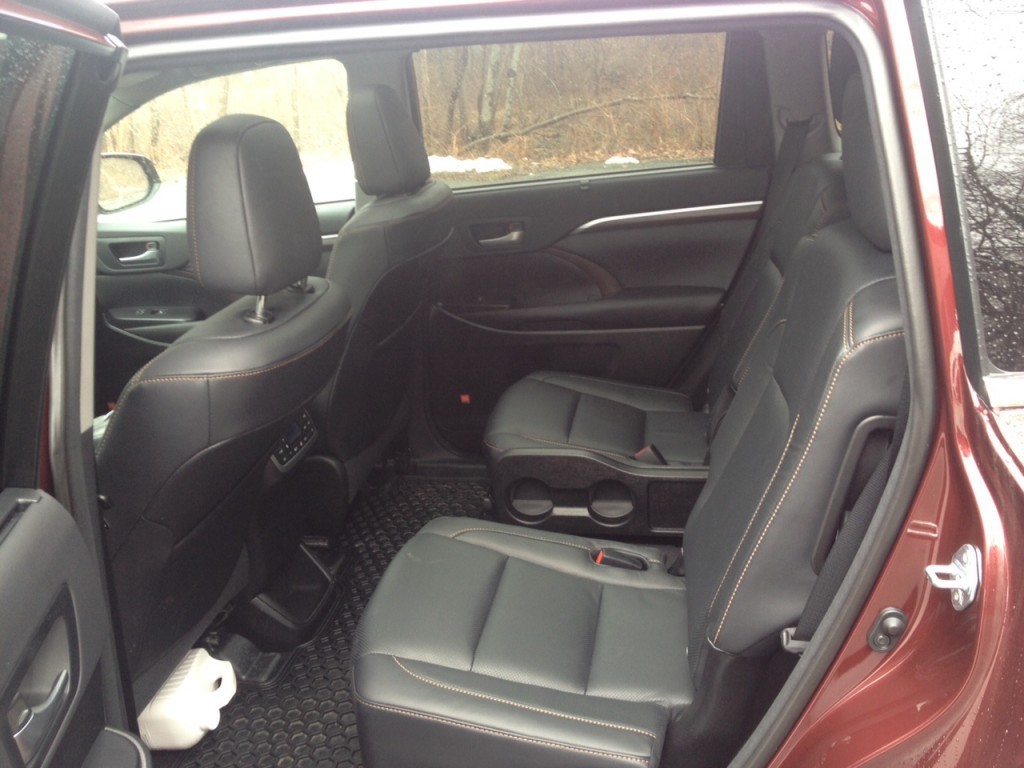 Speaking of the rear passengers they are treated to comfortable bucket seats and good legroom in the second row. The third row passengers will receive adequate room but adults may have a tougher time back there on longer trips. Thankfully, there is no need to yell in order to communicate with the coach passengers as Toyota has built in a feature which will carry the driver’s voice through the speakers in the back. It’s a bit of a strange idea but it does work fairly well.

While few will walk away disappointed in the Highlander’s interior room, it’s clear that the Sienna has significantly more space for both cargo and people. Then again, there is no hybrid version of the Sienna. 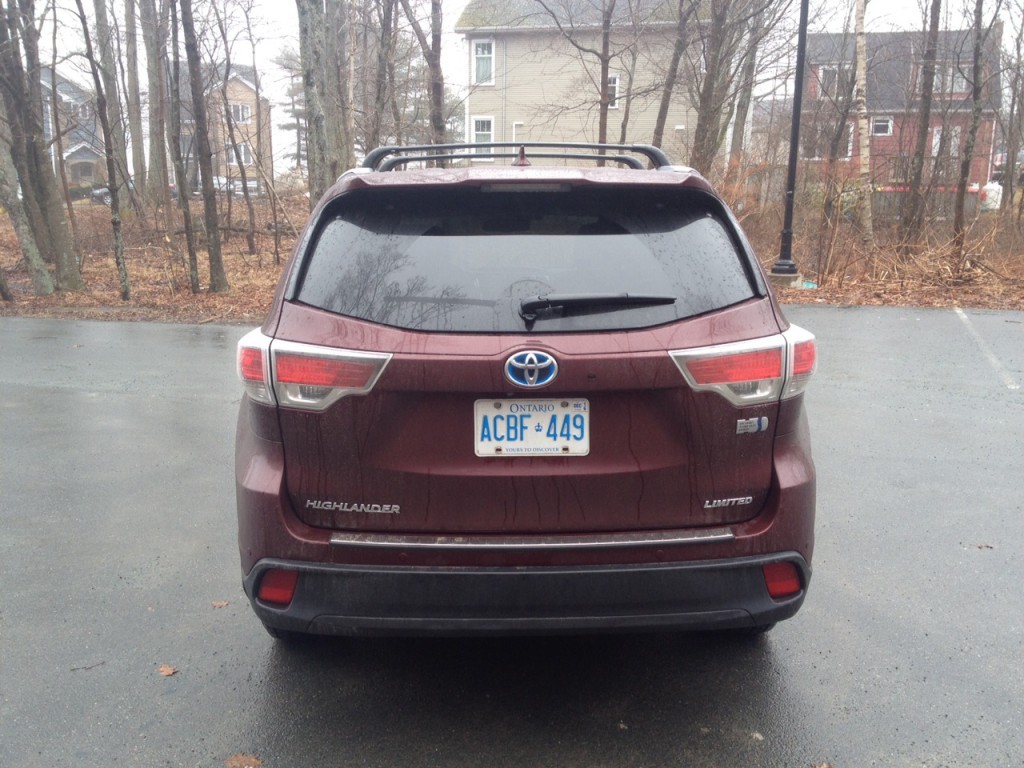 Here you won’t find a 4-cylinder but rather a 3.5 litre V6 mated to a continuously variable transmission (CVT). Total engine output chimes in at 280 horses and 215 pound foot torque. Naturally, the Highlander hybrid has all-wheel drive which is actually controlled by electric motors. One takes care of powering the front wheels and another for the rear wheels.

Acceleration is linear and smooth – the CVT isn’t too intrusive but it is still soul sucking to no end. Then again, if you’re purchasing a hybrid, chances are exhilarating thrills are a bit lower on your priority list. 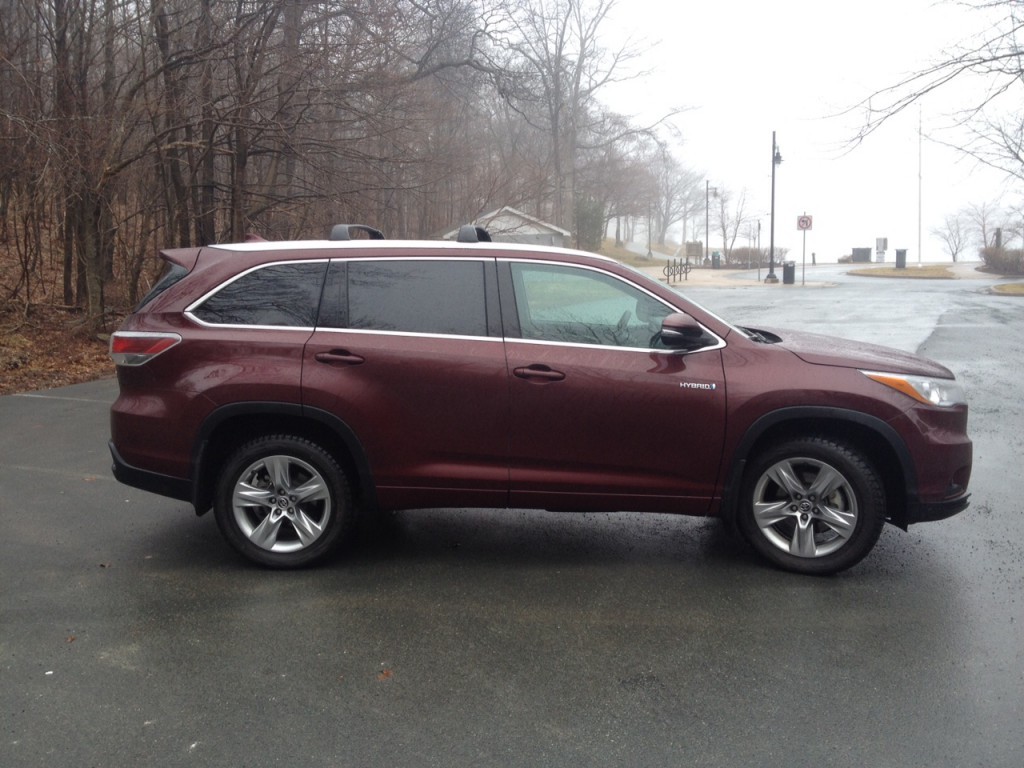 One thing that was a bit disappointing is its apparently lack of ability to drive solely on the electric motor alone which is common in most hybrids. Even in EV mode the Highlander will kick in its gasoline engine at speeds above 10 kph.

If you’re into a relaxed and smooth ride then the Highlander doesn’t disappoint. It’s Lexus-like ride soaks up imperfections in the road with ease. On the other hand, if you’re the type that likes to accelerate quickly on onramps then the Highlander hybrid isn’t for you. It’s suspension is not set up for spirited driving and it shows. But that shouldn’t count as a con against it since that isn’t the Toyota’s primary focus in life. As mentioned, its main focus is blending fuel efficiency with size and luxury. 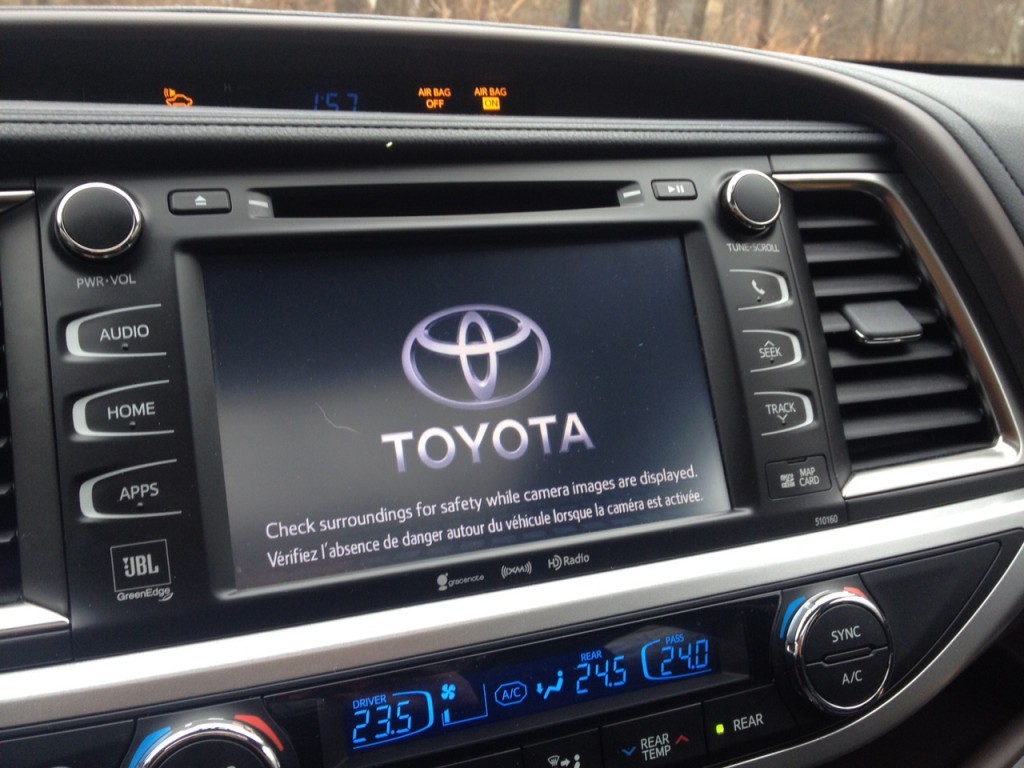 But in terms of comparing it to the normal Highlander, there isn’t too much different about its driving characteristics. In fact, I would wager that if you took a regular human being off the street and told them to go for a drive most wouldn’t even realize they were driving a hybrid. Yes the CVT would be a give away, but as mentioned it’s so unobtrusive that the average person wouldn’t immediately notice it. That matched with a similar ride and new visual giveaways that you’re driving a hybrid and you’ve got yourself a fairly impressive vehicle on the whole. 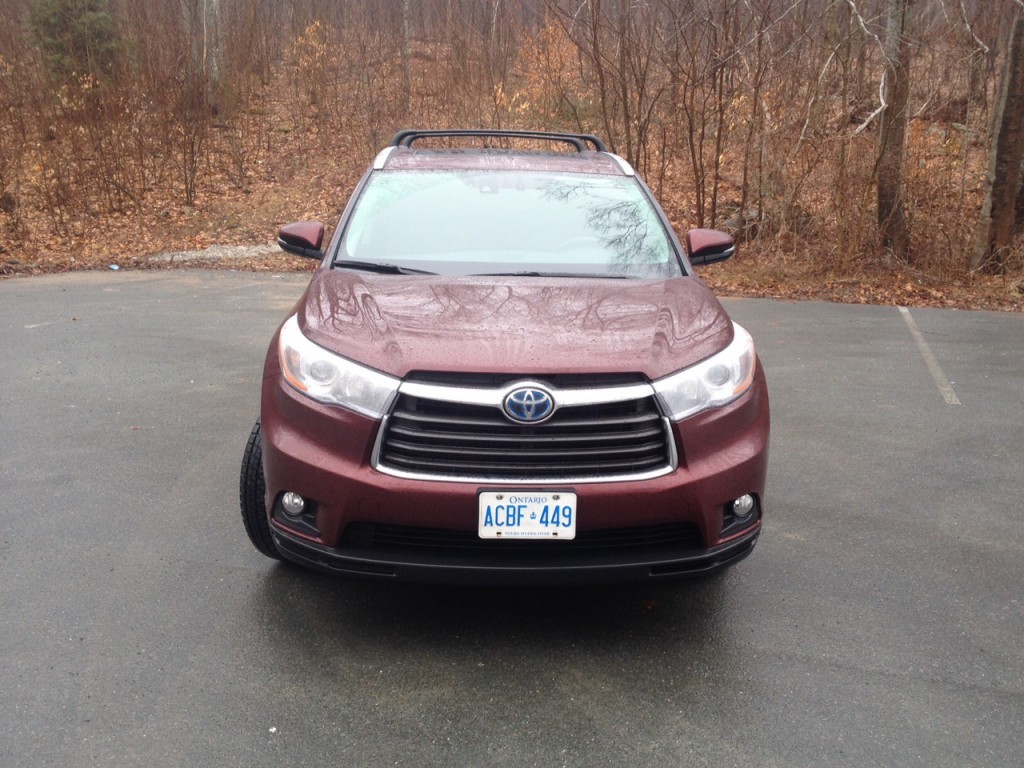 Being a hybrid, you would expect fuel consumption figures to be fairly impressive as well. Officially the Highlander Hybrid gets a rating of 8.6 L/100 kms in the city and 8.5 L/100 kms on the highway. During my week of mixed driving I landed at 10.0 L/100 kms. There’s two ways to look at that. Firstly, you could consider that to be fairly unimpressive considering you paid all that money for a hybrid version in the first place. Or, you could consider it pretty decent given the regular Highlander is rated much higher at 13.0 L/100 kms in the city and it’s not likely that you would get that in real world driving. The question is, is higher initial cost a deterrent to what you actually save at the pumps. 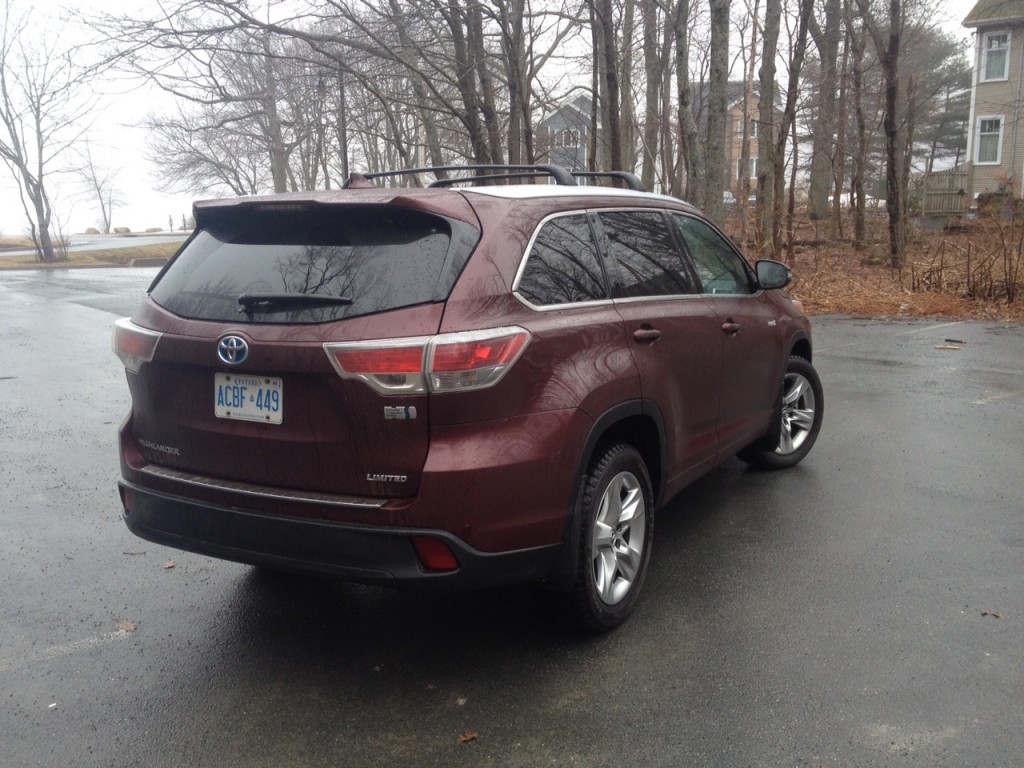 But to answer the original question, it seems Toyota has impressively been able to come up with a luxurious yet efficient rig capable of carrying lots of people and cargo with a solid comfortable ride. I’m not sure how many people are cross shopping it with the Lexus equivalent in the form of the RX hybrid, however my guess would be only a few would do that and those that would likely would only do so because a salesman showed them a leftover Highlander Hybrid that they are desperate to get rid of. Then again, the Highlander hybrid has competition on the other end of the spectrum now too. The Toyota RAV4 Hybrid is more efficient and still can hold lots of cargo. Only the sales numbers will determine a winner in that battle. 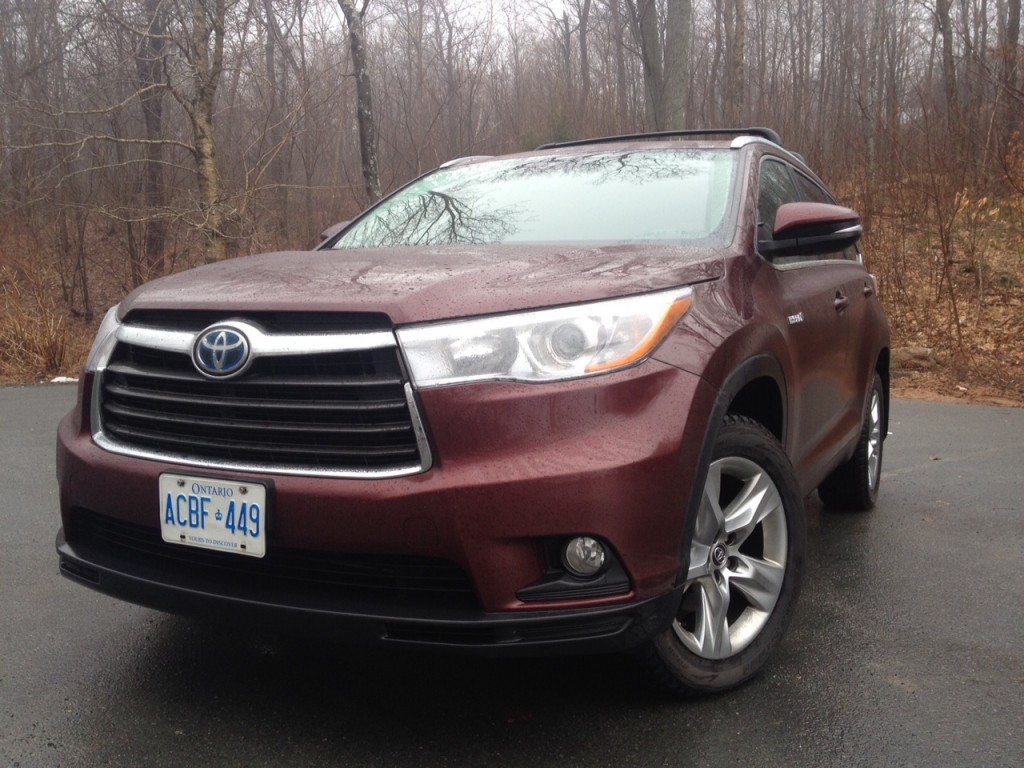