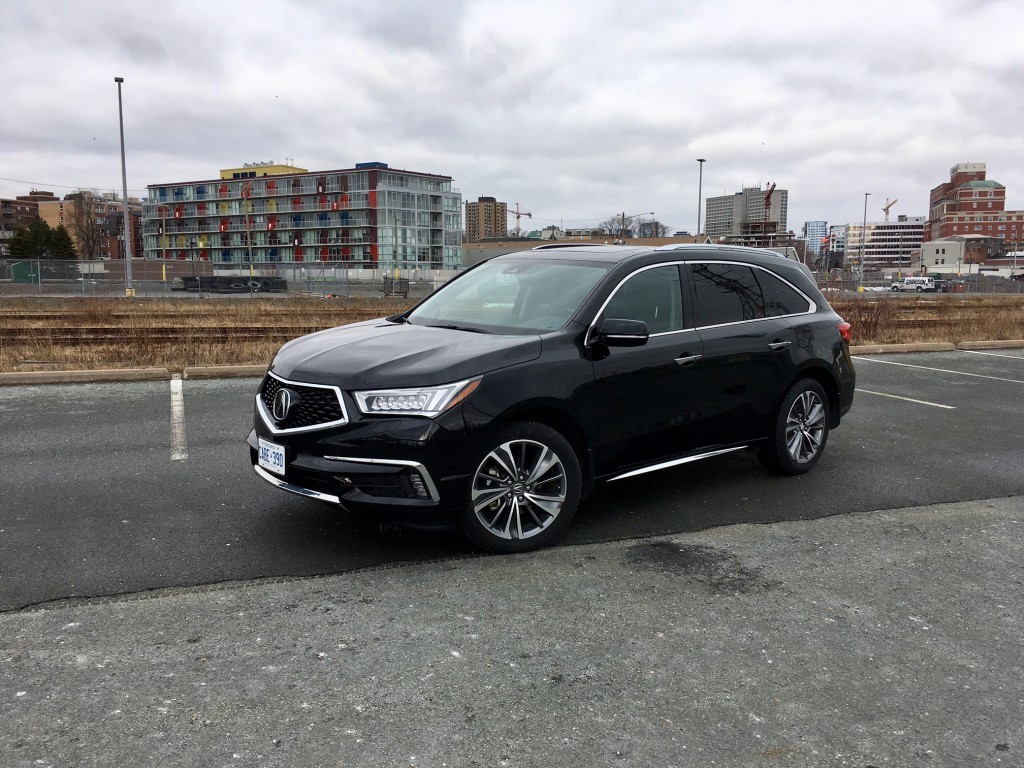 With the RLX posting dismally low sales numbers consistently, it may be a bit fairer to call the MDX the flagship of the Acura lineup (NSX not withstanding).

It has, after all, been a part of Acura’s line up for over a decade and a half and, let’s be honest, larger SUV’s play a large role in defining a luxury’s brand’s image.

So then, when a brand is looking to change its corporate styling, it’s a bit of a gamble to try it out on the flagship. But that’s what Acura has done with the mid-cycle refresh of the MDX. 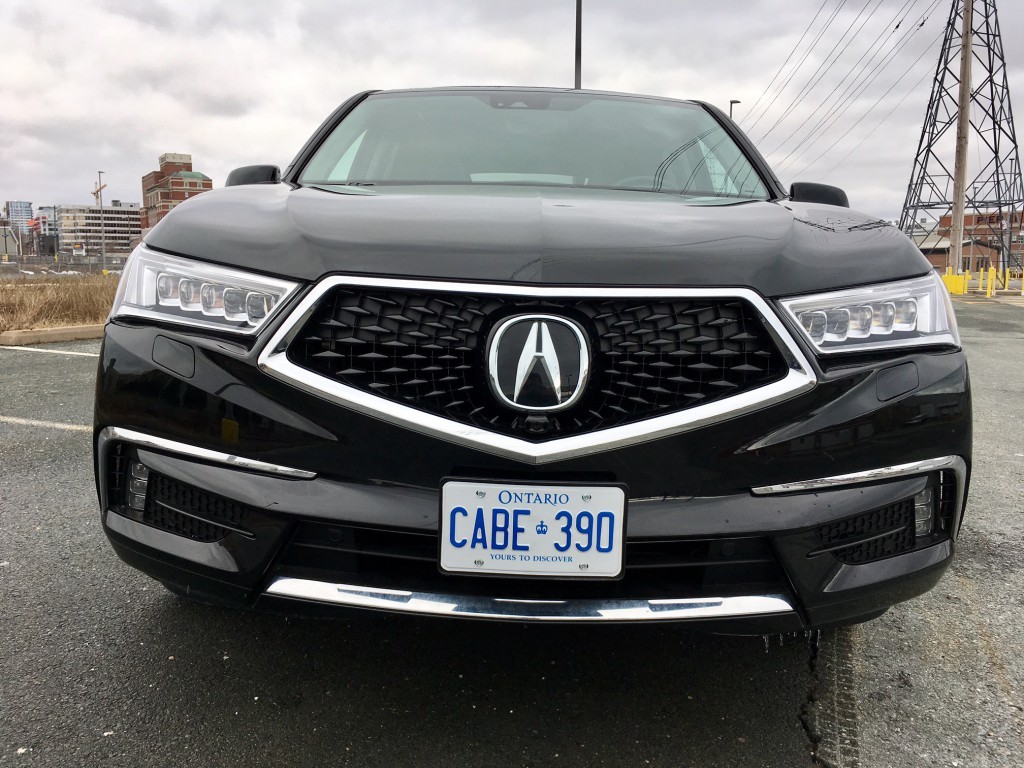 That new corporate styling is largely reserved to the front fascia. Gone is the infamous ‘beak’ or ‘shield’ that turned off a lot of people, but Acura soldiered on with it and added it to almost every single one of its models.

Now, the beak has been replaced by a larger, pentagonally shaped grille with a large Acura badge and a grille that fades away from the badge. When you mix that with Acura’s signature jewel eyed head lights, along with my tester’s black exterior colour, and you get a look that better conveys the fact that you paid a significant amount of money for this SUV.

New wheel styles are available along with added bits of chrome trim here and there. The rear end look is similar to the 2016 model, which is fine, however I remain confused as to why Acura still does not offer LED brake lights or turn signal indicators, though it should be mentioned that LED turn signals are now featured up front.

As far as refreshes go, this is a handsome update. The new face is widely better than the outgoing model and you can expect to see this face trickle down throughout the rest of the Acura line up starting with the TLX. 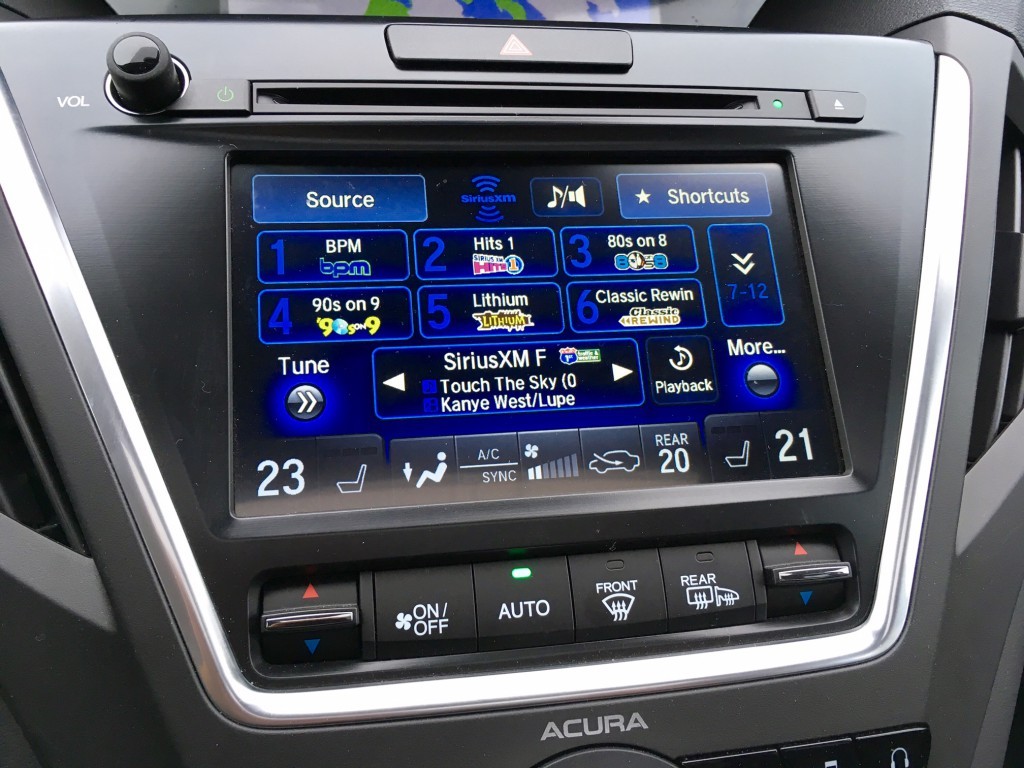 Inside, there are minimal changes which really does make the MDX seem dated. Sure the red engine start/stop button is nice as well as the steering wheel design and overall quality of materials, but the two tiered screen layout on the dash remains. And it doesn’t make sense; never did. The lower screen takes care of most of the controls for the infotainment system, but it also foolishly holds the controls to the heated seats and fan speed. Combine that with a nonsensical layout and a touch screen that doesn’t always respond to command and you’ve got a frustrating experience already brewing which is made worse the fact that controls for the upper screen are operated by a dial. Which is located below the lower screen. If you can tell me which planet this makes any sort of logical sense, I would be all ears.

But the MDX, and indeed Acura in general, has always been chalk full of tech. The problem with that is that the tech is also annoying. The rain sensing wipers were entirely too lazy, to the point where I just used them manually when I had to myself. The parking sensors seem to freak out over things that don’t seem to be there. It has lane keep assist but it does its job the same way a lazy cat would. 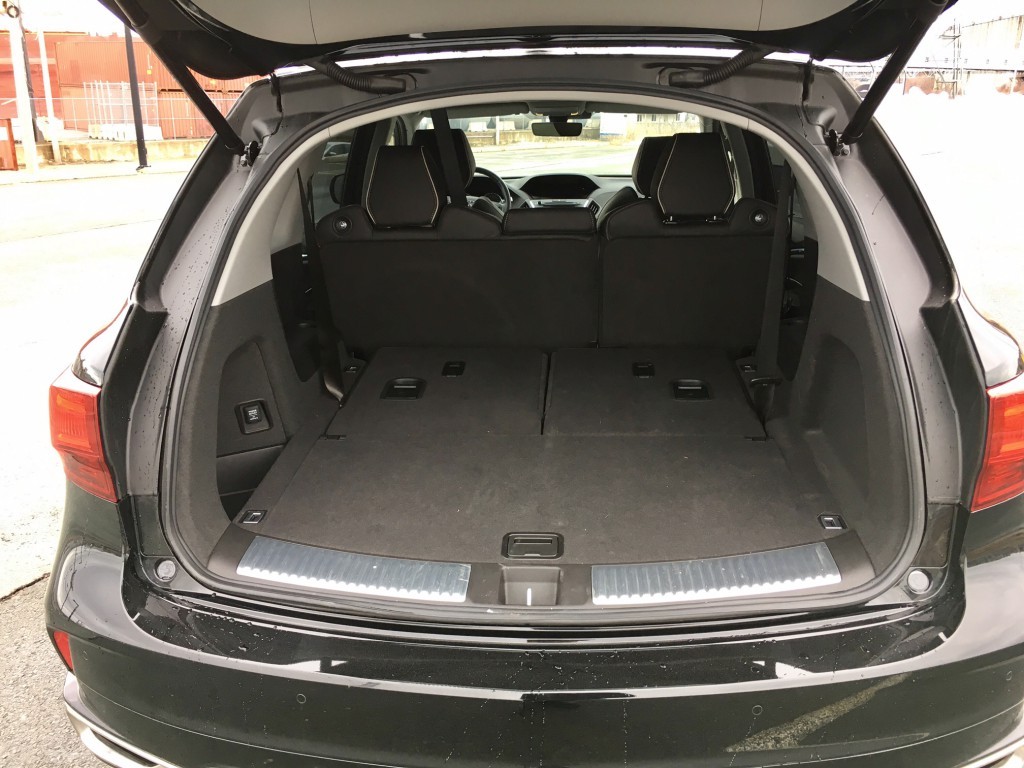 The transmission is high tech too opting for buttons instead of a traditional shifter. I’m going to be lenient on this as I don’t think it’s difficult to push a button, but you’ll likely read other reviews that label the transmission as difficult to use and get used to.

Interior room is adequate enough to include three rows, but as per usual, the third row is a tad on the cramped side. That said, gaining access to the third row is made simple by the use of a button which propels the second row forward. This works all the time and works well. But if passenger room is really what you’re after, suck it up and get a minivan. 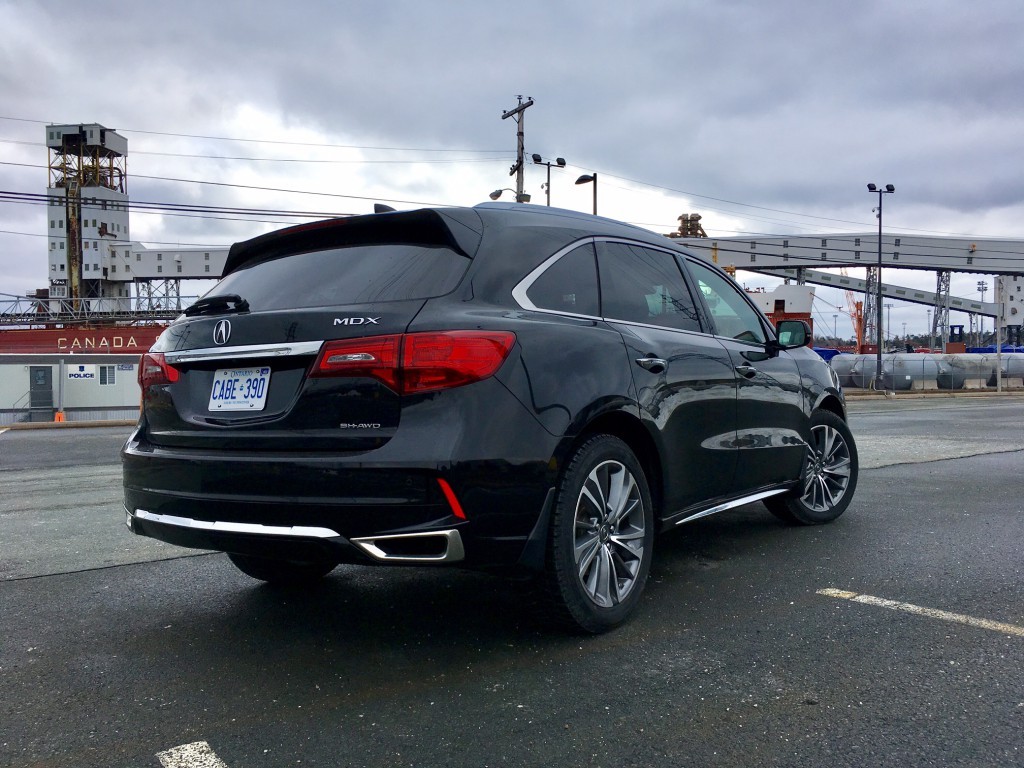 While a ‘sport hybrid’ is on its way (and will likely be the smarter option to go with), the MDX makes do with a 3.5 litre V6 which is good for 290 horses and 267 pound feet of torque. That’s it, it’s all naturally aspirated, and it’s mated to a 9-speed automatic. The end result is a refreshingly simple drive that isn’t aided by turbochargers or superchargers. But that also means that if you want power, you need to rev rev rev.

Now, there’s nothing necessarily wrong with that, but keep in mind that you aren’t driving a light, low-slung performance coupe. You are riding in a large, heavy SUV. So revving lots doesn’t necessarily translate into feeling particularly quick, though it isn’t particularly slow either. Therefore, it’s safe to say hat power is adequate and if you like engine noise, it does exude a pleasant sound – though I’m wondering how many people in the luxury SUV market are hoping for such things as opposed to calm and quiet. 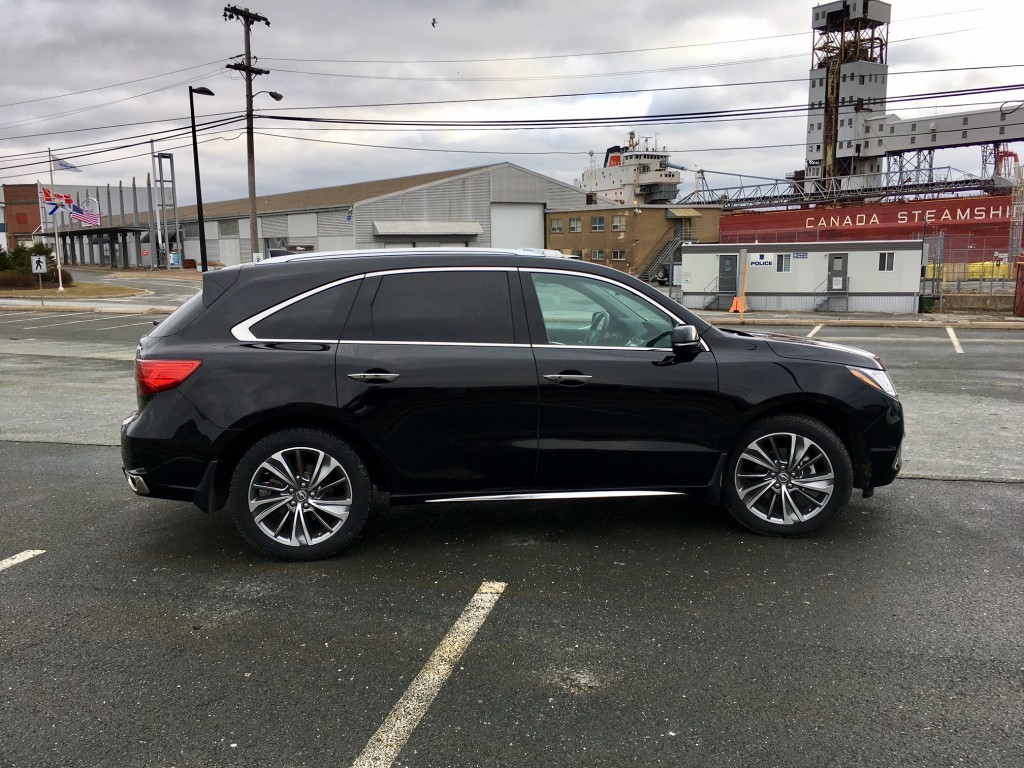 In terms of handling, the MDX does relatively well. In terms of its competitors its on the more athletic side of things – more so than a comfortable ride. It’s not that the MDX feels uncomfortable, it’s that Acura clearly wants to give competitors like the BMW X5 a run for its money when it comes to handling. If you value performance, this isn’t a bad thing.

Otherwise, normal driving around town returns a rather compliant ride with decent steering feedback that isn’t too weighted or too much on the light side. However, in normal driving, the 9-speed automatic is has laggy shifts though they are direct when they eventually do occur. 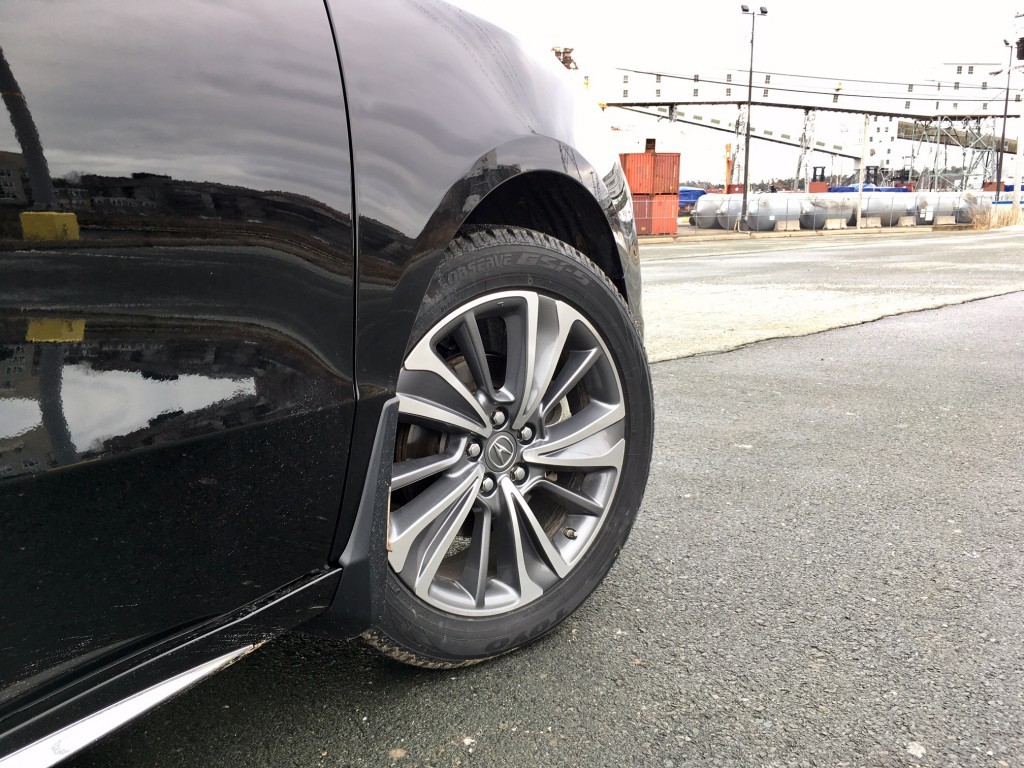 Getting back to those high revs in order to get power, this obviously makes fuel efficiency take a bit of a dive. During my time with the MDX, in mix city/highway driving, I was able to return 13.7 L/ 100 kms. That’s certainly not outrageous for a vehicle this size with the power plant it contains, but it’s certainly off the mark of the official 12.2 L/100 kms city rating. It’s officially rated at 9.0 L/100 kms highway. 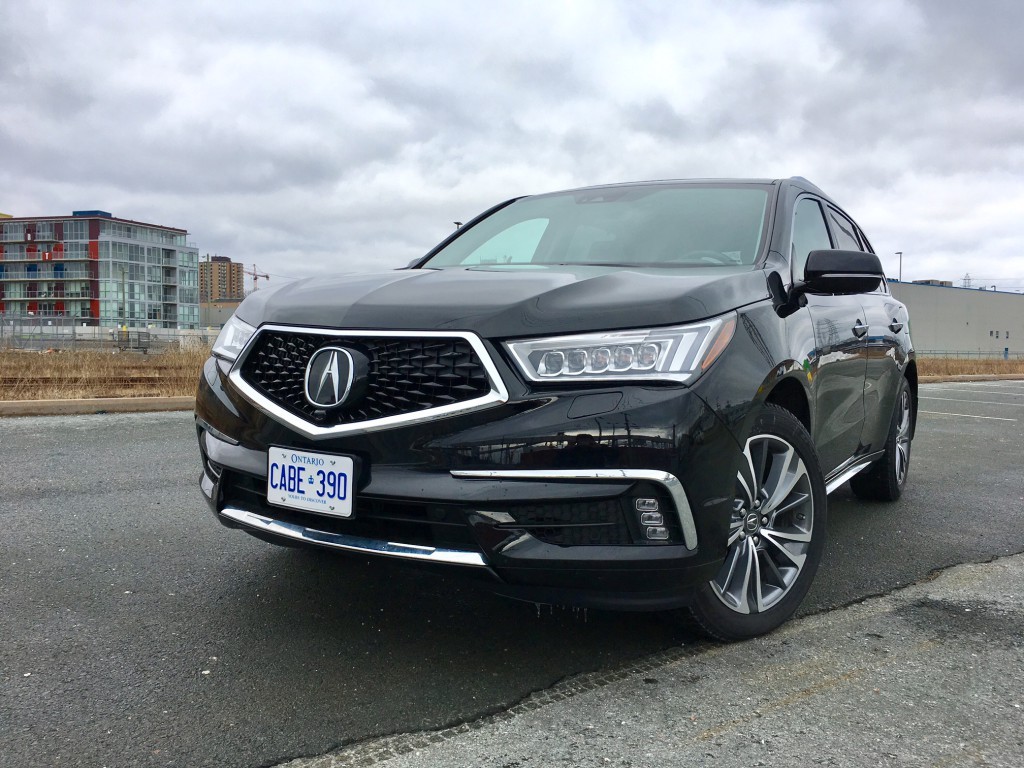 Though its age is showing, the MDX still impresses as far as luxury SUV’s go. But it’s biggest threat isn’t necessarily its competitors or its more obvious faults. It’s the vehicles available from Honda; its cousins. If you really want an SUV with a decent amount of luxury and three rows, the recently redesigns Honda Pilot can be had with close to all the bells and whistles and the MDX for less. It may not have the same brand panache, but your bank account will likely be the one with the last laugh. And then there’s the Honda Odyssey; the smart choice. Yes, it’s a minivan, but it can also be had with plenty of bells and whistles and will hustle you and your passengers with much more room and comfort.

As I previously alluded to, it now seems in order for the MDX to really make more measured sense is if you get it in hybrid guise as this is not offered on the two Honda products mentioned above. Until then, the mid-cycle refresh should be enough for an upkeep of sales, but how long that will last is anyone’s guess.