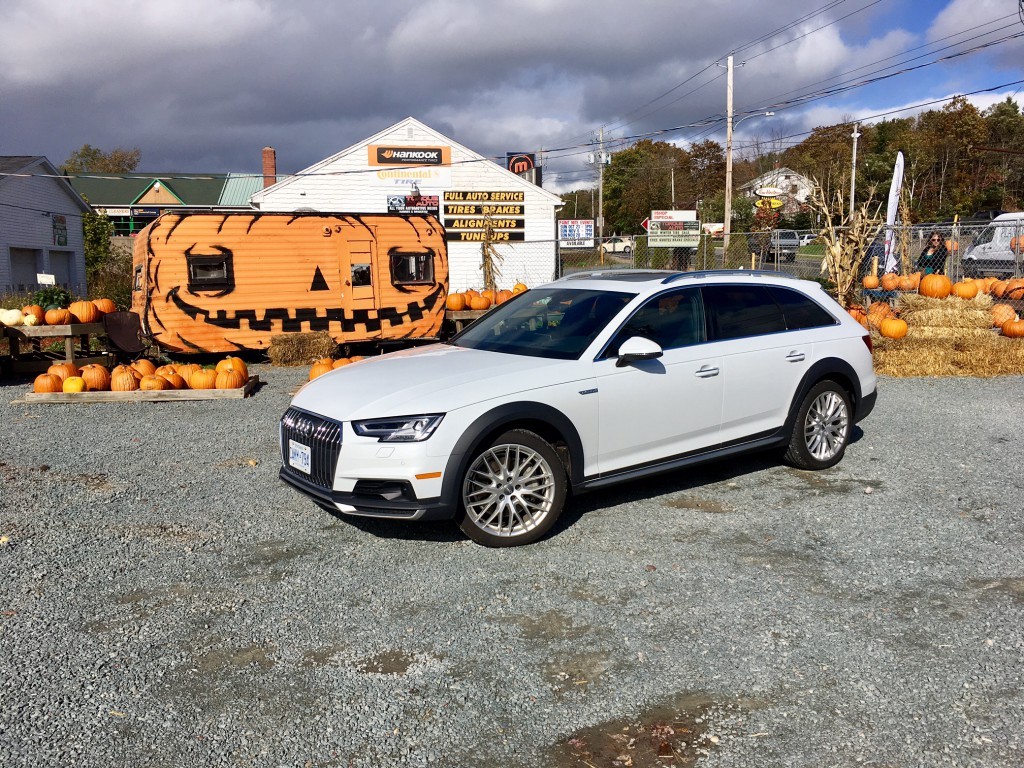 A colleague of mine asked me how I was enjoying my tester for the week; a Audi A4 Allroad. I mentioned that I loved it. She seemed surprised.

“Even though it’s a wagon?”

“Because it’s a wagon” I chirped back.

It was then when she decided to make a confession. While she didn’t necessarily relate to my love of wagons, she could relate to loving a typically unloved sort of vehicle. That’s when she came clean on her love of minivans. While I’m not a minivan guy myself, I can certainly appreciate their practicality, as she acknowledged that wagons indeed make some sort of logical sense.

It was like discovering that you share the same sort of guilty pleasure as someone else. Suddenly it became okay to talk about it.

And talk about it we must because both the minivan and wagon segments are declining drastically. For example there are only 4 minivans to choose from in the North American market (five if you include the Mazda5, but it’s expected to get the axe in the Canadian market soon). Likewise, only the Germans brand plus Volvo and Subaru offer wagons.

Both segments have one segment in particular to blame: the SUV/CUV.

It seems as though, for the majority of consumers, perception is more important than reality. It’s a bit like hard core Trump supporters or Donald Trump himself. People are attracted to the idea of being an outdoorsy, tackle-anything type of person and thus they need a vehicle to reflect that, despite its inability to do so. There’s a lot of SUV’s out there that certainly look the part, but very few that can actually be successful at putting the rugged look to the test.

Wagons don’t do that, or at least traditional ones don’t. But what if they did? That’s where the A4 Allroad comes in. 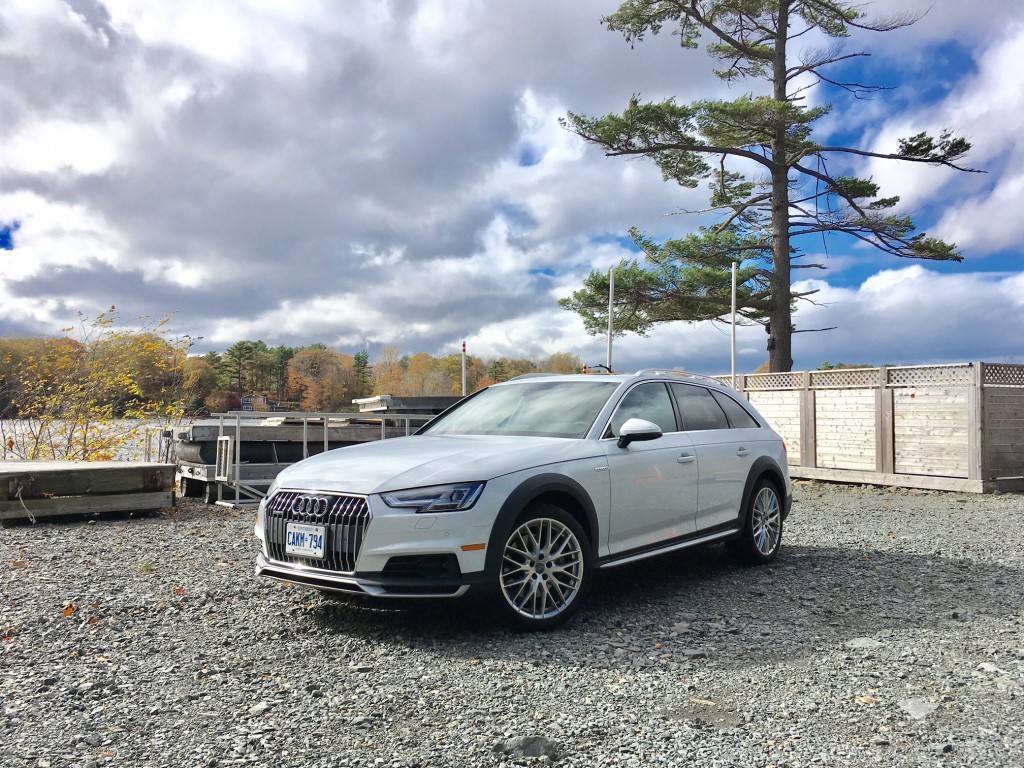 So, one of the drawbacks, according to wagon haters, is the look isn’t very appealing. The Allroad is based off of the regular A4 wagon, known as the Avant, and I have to say, it looks rather good. The Allroad gets the same facelift as the A4 sedan does with reworked headlights, taillights, unique design lines that that are subtle yet substantial at the same time, and new wheel designs.

What makes the Allroad different is a unique grille with vertical chrome slits, plastic cladding around the wheel wells and other lower trims, a raised ride height and flared fenders, not to mention Allroad badging.

Personally, I think it gives this wagon the rugged look that SUV lovers seem so hell bent on having. Whether or not these looks will have any effect to get SUV buyers into an Allroad remains to be seen, however my tester in particular drew nods of approval for its Glacier White Metallic paint, optional 19-inch wheel design and the sequential rear LED turn indicators. 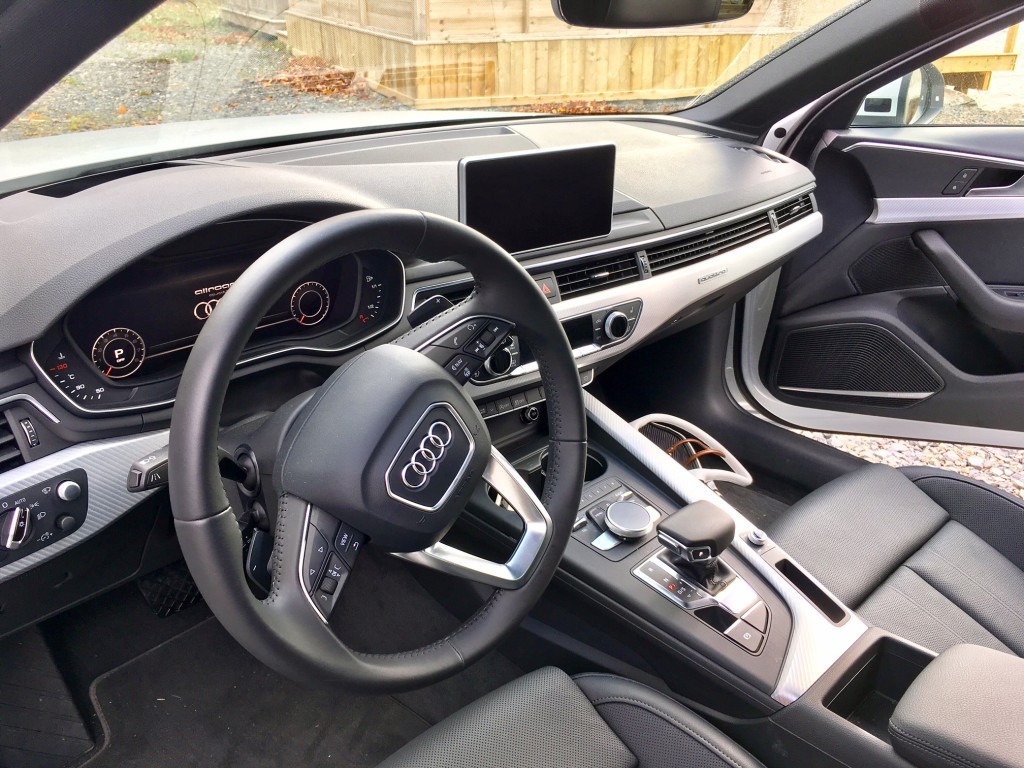 A lot of changes to the interior of the A4 sedan carry over to the Allroad and that certainly isn’t a bad thing. One notable exception is the Allroad gets the steering wheel design typically reserved for Audi’s latest SUVs – perhaps done in an effort to shake that nasty old wagon stigma.

The top trim Technik offers all the goodies you’d expect and more including Audi’s virtual cockpit instrument cluster. This is a configurable cluster and it works brilliantly, especially if you’re using the navigation as the map appears within the cluster as opposed to on the infotainment screen located on top of the dash. It’s bigger, and feels like a more natural place to avert your eyes. It also has a heads up display which clearly projects your speed onto the windshield, along with the posted speed limit of the road you’re driving on.

I’ve heard many people complain about Audi’s new shifter, as it is not gated. But specifically I hear complaints that you need to push a button to place it into park. I’m not sure what is so difficult about pushing a button, but it is something you get used to fairly easily. The big bulky design of the shifter fits nicely in your palm and it makes a good wresting point for your wrist as you use the dial located in front of the shifter to control the infotainment system. The placement of the volume knob is next to the shifter, but it’s closer to the passenger. If it were closer to the driver, then this whole set up would be pretty damned near perfect. 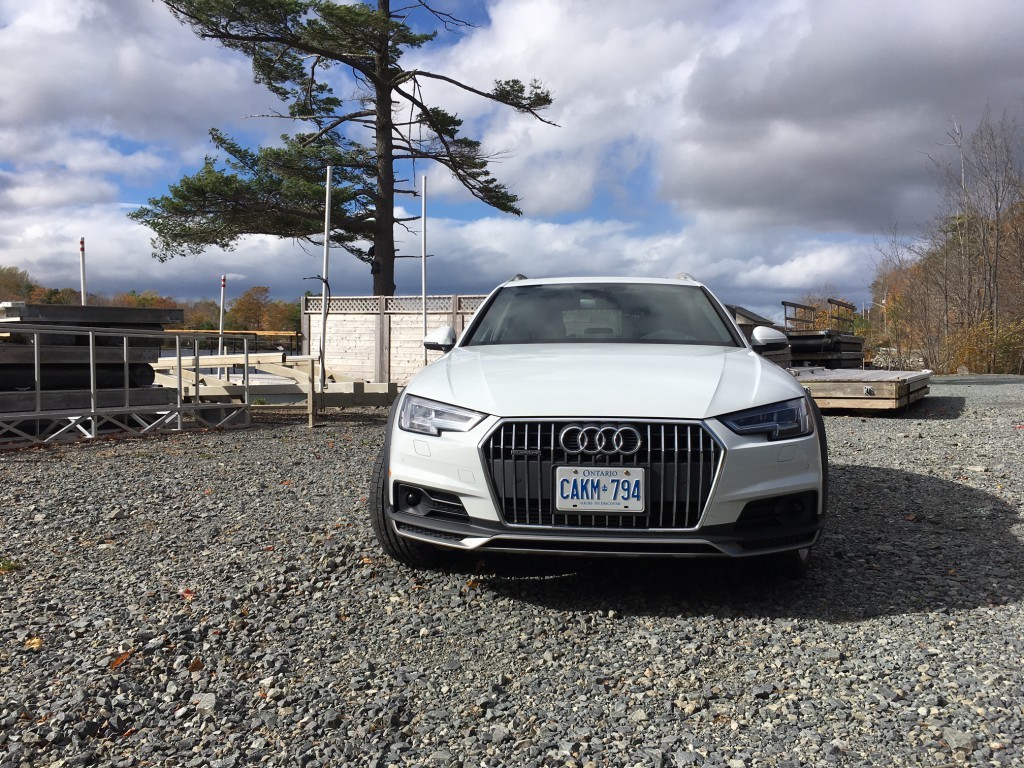 Seat comfort is good, if a bit on the firm side and back seat legroom is adequate. You don’t want to be the passenger related to the centre rear passenger seat though, as it features one of the most intrusive centre humps I’ve seen in a long time. That basically makes this wagon a passenger vehicle that seats four. Since SUVs have higher ride heights, the centre hump becomes less of an issue. Chalk up one for team SUV, I suppose.

Rear cargo room is plentiful, as you’d expect, but the seats don’t quite fold flat which seems a bit odd. That said, with them folded, you still get a cavernous amount of useable space.

I should note that this is the first Audi I’ve driven that has had such a finicky keyless entry system. I’d say about half the time, the door either wouldn’t lock or unlock on the first try. One time I even had to get the fob out of my pocket to unlock the door. Yes, this may be a first world problem, but if you’re going to pay $65 grand for a car, you’d expect all the features to work more often than not. 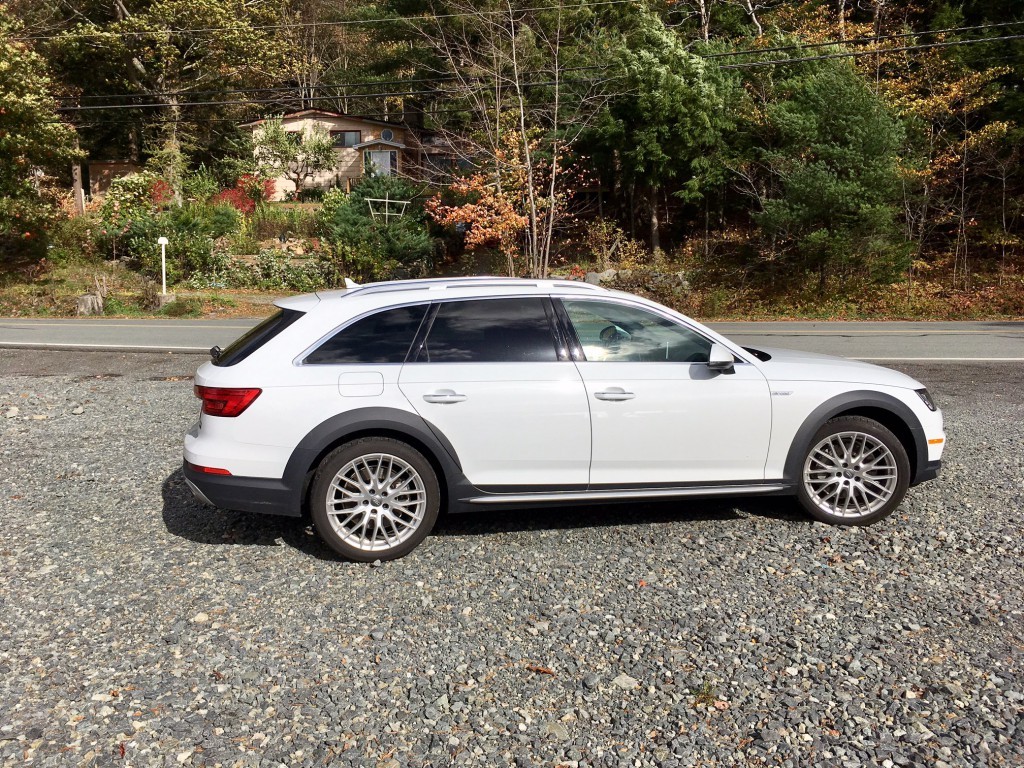 You can have any engine you want in the new Allroad, as long as it’s the 2.0 litre turbocharged 4-cylinder making 252 horsepower and 273 pound feet of torque. Sorry, diesel fans. But at least this unit sounds like a diesel. Seriously, it clatters about at idle. Still, it’s a very solid engine and with help from the 7 speed DSG transmission, the Allroad can get its 3,800 pound mass moving in a hurry if needed – to 100 in 5.9 seconds to be specific.

While this engine with a six-speed manual would be a delight, Audi does DSG’s well as gear shifts are quick and crisp. The only task this transmission struggles with is getting the Allroad off the line as there is noticeable lag. You do eventually get used to it though. 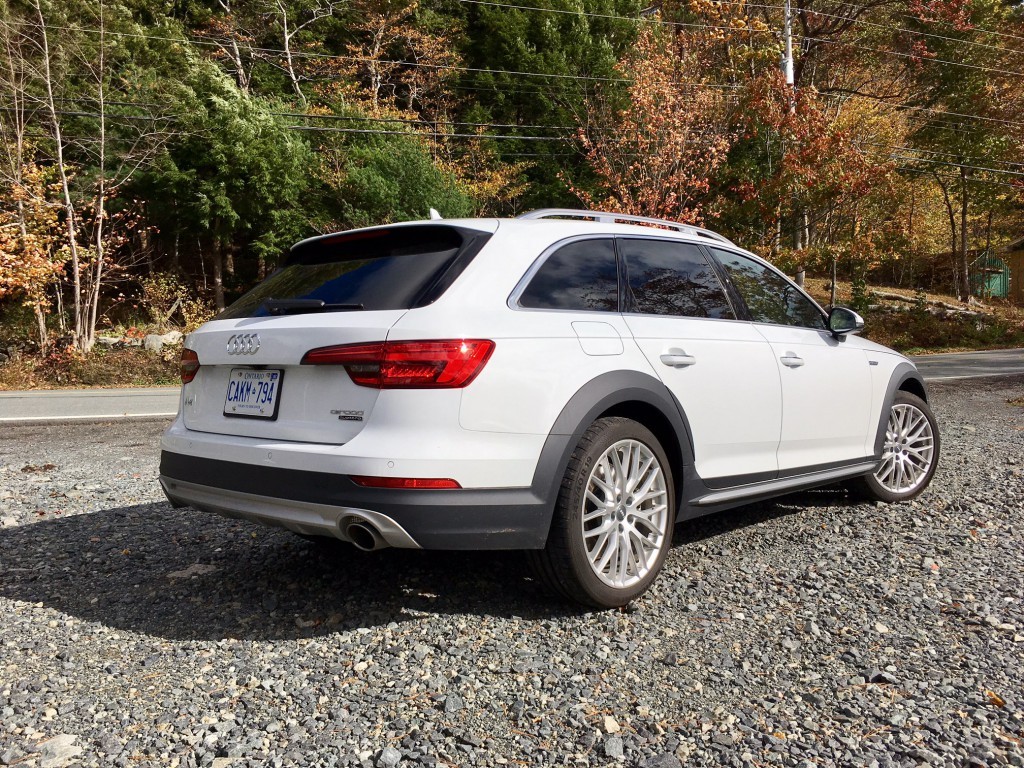 Alright, so one of the main reasons why I’m such a fan of wagons over SUV’s is that you don’t need to sacrifice performance (read: handling). SUV’s tend to be top heavy and heavier in general which makes most very unfulfilling to drive in the bends.

Since the Allroad has a raised ride height, I was eager to see whether or not it would have any impact and I’m pleased to report that the Allroad feels planted and surefooted in the bends. I didn’t notice much – if any- body roll. The sedan I drove did feel a bit tidier in its execution, but there seems to be minimal penalty in having a higher ride height and heavier mass. 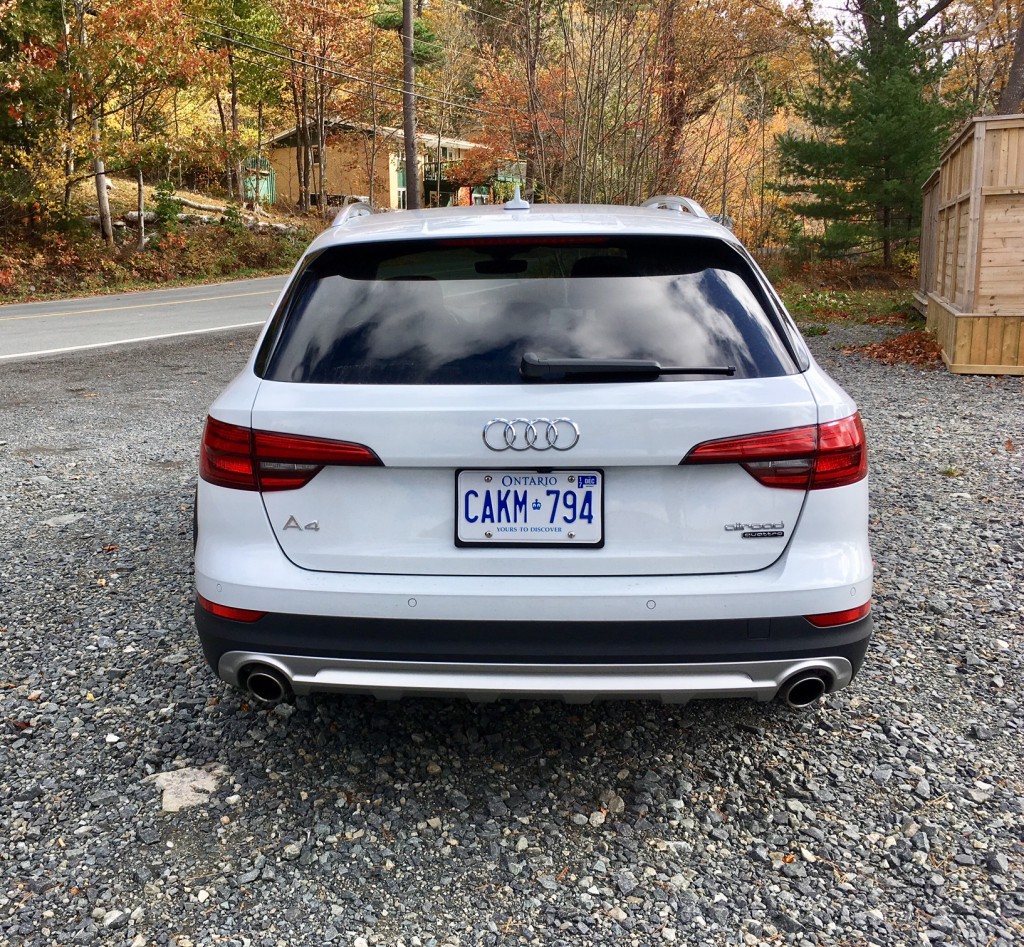 On the highway, the Allroad is a pleasure to drive. It feels solid and comfortable at the same time. I had lots of confidence that the Allroad would maintain its composure should an emergency maneuver be necessary, even at high speeds. There is a host of safety features that also help you (and it) stay in one piece such as blind spot monitoring and adaptive cruise control.

I did have the opportunity to do some mild to medium off-roading; something most SUV’s claim to excel at. Audi’s Quattro all-wheel drive system has long been hailed as being one of the best in the business, so purists may be a bit shocked to learn that Audi has messed with the formula a bit. Instead of being a permanent, continuous system, it now adapts an algorithm every 10 milliseconds to determine if more traction is needed. And this happens before slip actually occurs. The end result is a wagon that rarely finds itself in a situation it can’t get out of. I would wager that this Allroad could outmaneuver a significant amount of SUVs off and on road. Score one for the raised wagon. 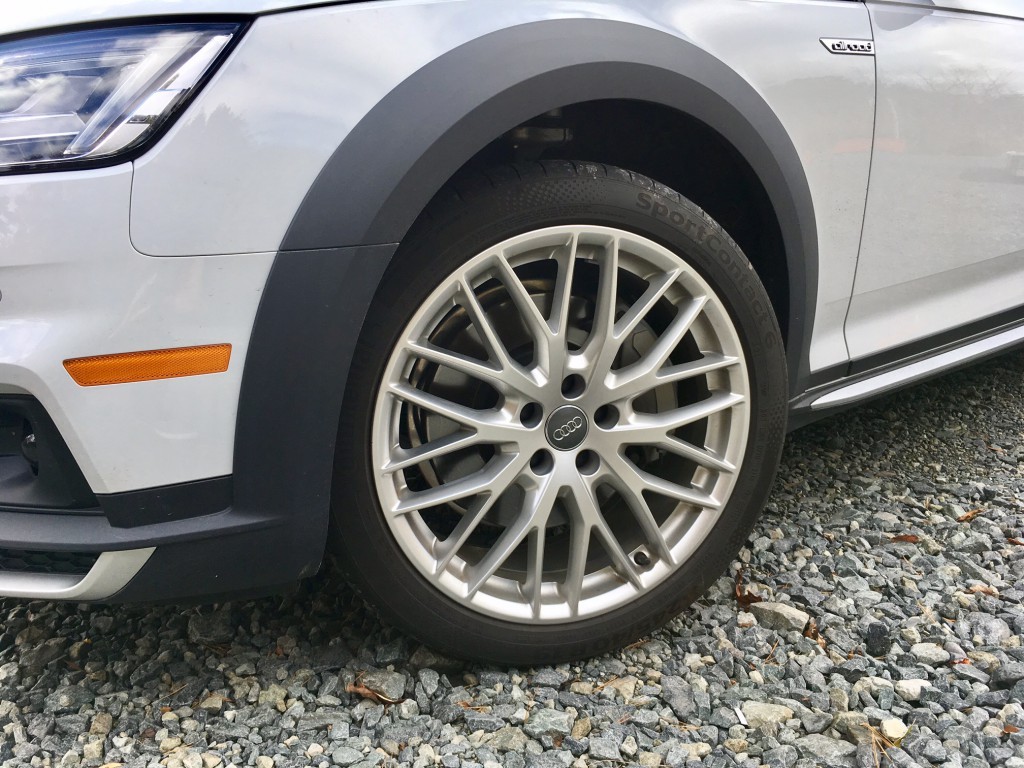 Official fuel consumption numbers are 10.2 L/100 kms city and 8.3 highway.  I managed to return 8.9 L/100 kms in mixed driving. That’s very good and not far off from the sedan where I returned 8.7 in mixed driving.  And this brings me to another big reason why I favour wagons over SUVs. I dare you to find an SUV of similar size that could do as good or better in fuel consumption numbers. 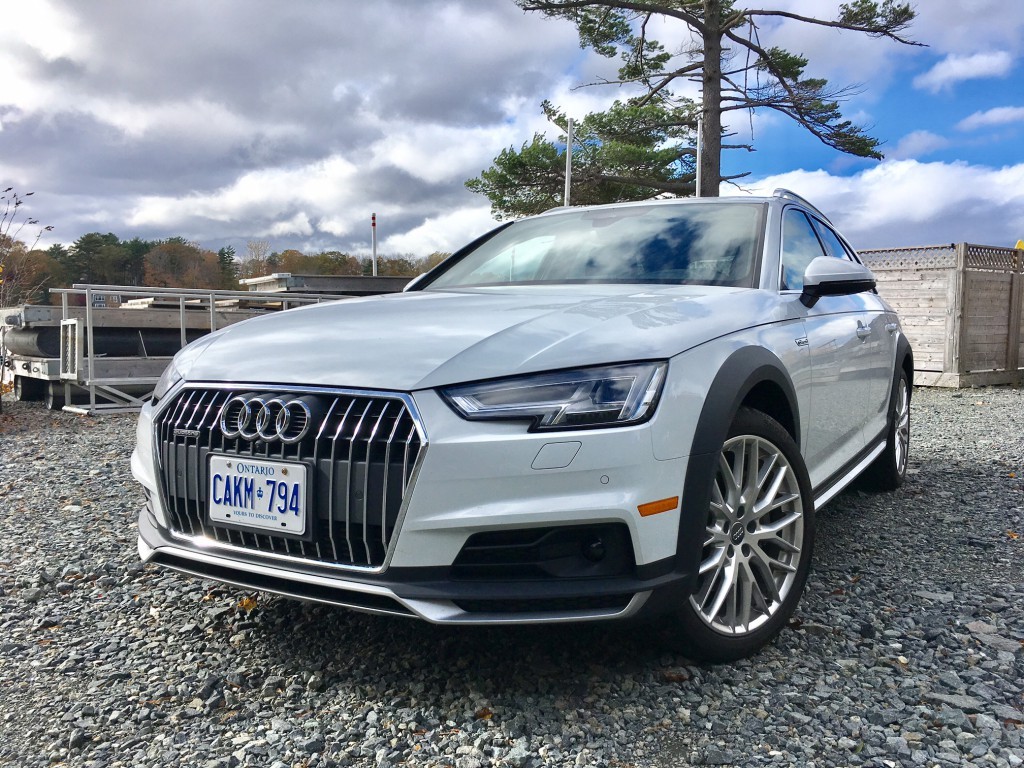 Aside from maybe not being as accommodating to passengers, the Allroad confirmed pretty much everything I always knew: wagons make more sense than SUVs. But that logic will fall upon deaf ears. You all will continue to buy more SUVs, plunging both the minivan and wagon to the brink of extinction in the North American market. And that’s a shame. For now, I’m just happy that Audi decided to sell this latest generation Allroad in our market at all, because it’s close to the pinnacle of what a nice wagon should be.