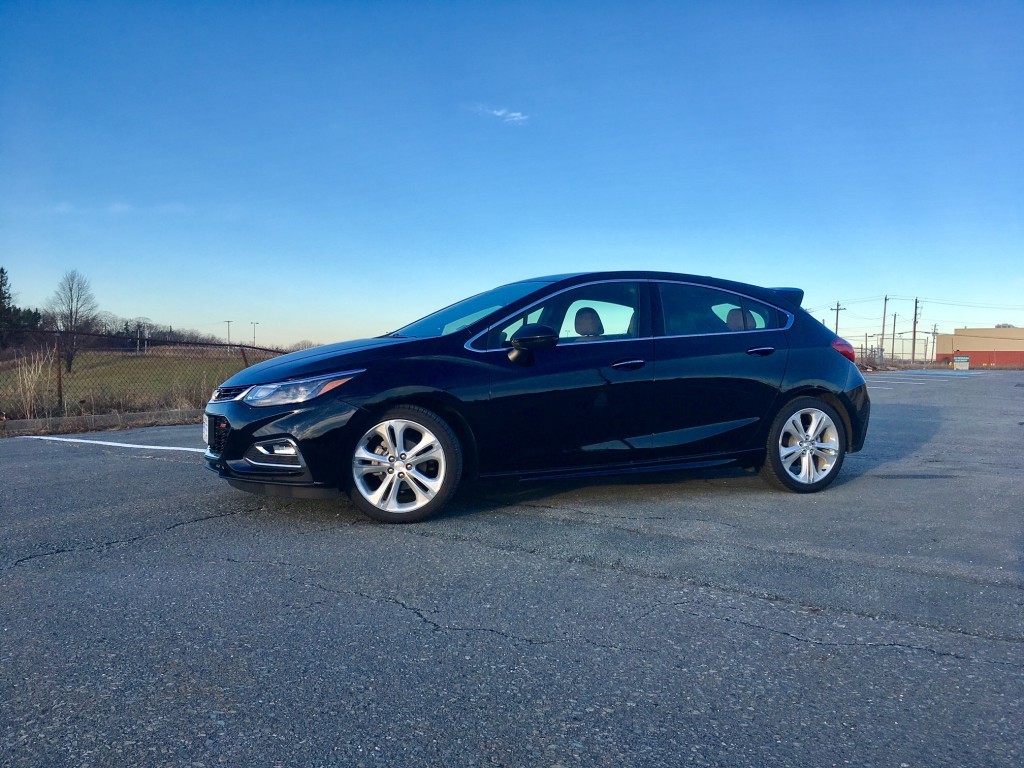 The Chevrolet Cruze has added a new body style to the North American market. The newest member dons a hatch instead of a trunk and I did not anticipate just how polarizing this would be to the general public.

I thought GM’s move to finally bring over the Cruze hatchback was overall a good thing. After all, the Cruze was one of the few left in the segment that did not have a hatched version of the sedan and, in general, sales suggest that Canadians love small hatchbacks. But, I wonder how many closeted hatch haters there actually are because the Cruze hatch certainly generated a lot of opinions and not all necessarily positive.

I encountered many friends, acquaintances and indeed perfect strangers who felt the need to bash my tester. They either hated the styling or just hated the idea of a hatchback in general. When I asked why, it seemed that it was boiled down to looks as a hatchback’s versatility can rarely be questioned.

This was an unexpected reaction to Chevrolet’s first introduction of a compact hatch since the Optima5.

Regardless, it is here now and it hopes to take on the likes of stalwarts  such as the Mazda3 sport, Volkswagen Golf  and Ford Focus hatch. 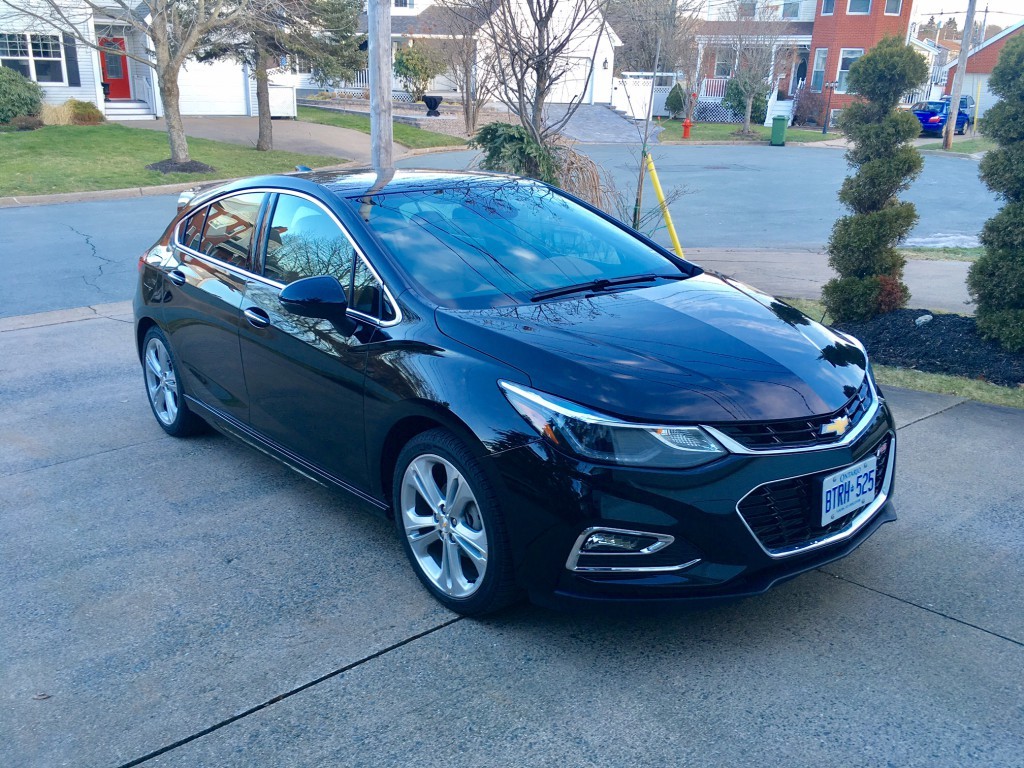 While I personally am not thrilled at the redesigned Cruze sedan’s looks, I think they did a good job with the hatchback. It is certainly a sportier look all while being a bit careful of claiming hot hatch status, despite what the large rear spoiler and RS badge on the front grille may indicate. Notwithstanding my tester being the top trim Premier, there are no HID or LED headlights available unfortunately; same goes for LED lighting in the rear. And if you fancy the 18-inch wheels, you’ll have to fork over $950 for them. Again, this seems a bit odd considering this is the top trim. A sunroof is also optional on the Premier model.

But whether it was the stretched looking taillights, or the short hooded pinned nose front fascia, for whatever reason, its exterior style seemed to turn a lot of people off. Since it is subjective, I’ll let you be the judge, but this author thinks it looks rather good. 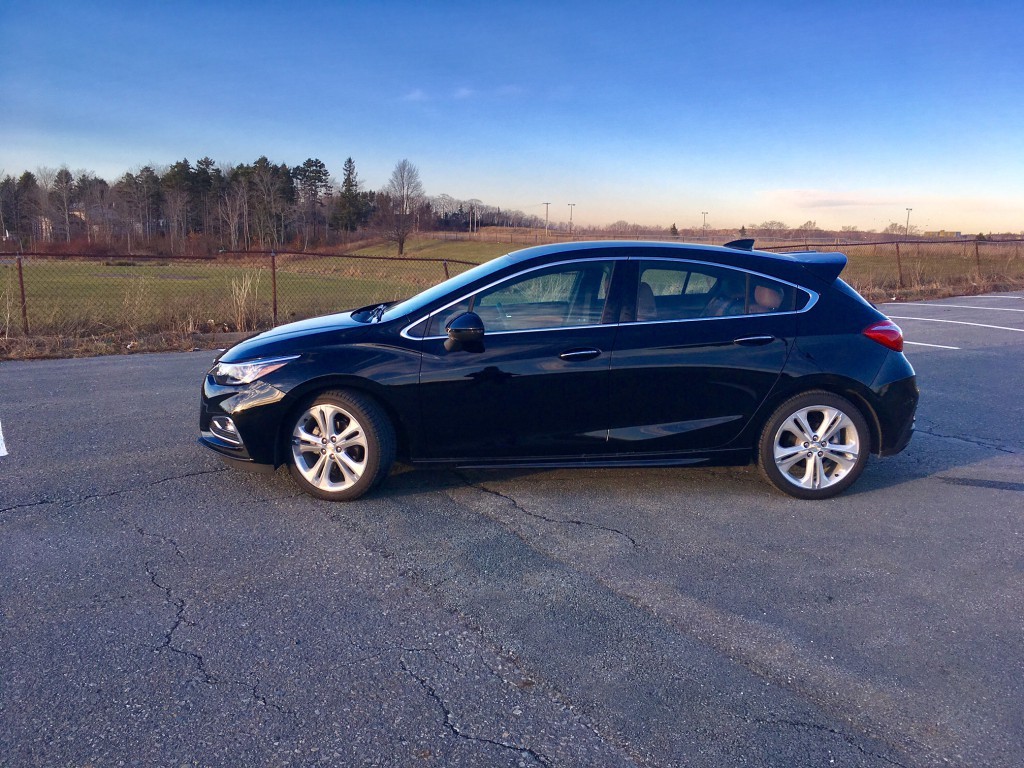 While the lack of a sunroof was notable, other features were nice to have such as a heated steering wheel; remote start, automatic high beams and lane keep assist.

The interior, with my tester’s caramel seats, looked and felt quite nice. Quality overall was good though some hard plastics were still there in a few spots.

Interior room is actually identical to that of the sedan and that’s a good thing because there was plenty of head room all around and leg room was adequate. Obviously the hatchback has an advantage in terms of cargo space which offers 523 L of cargo room compared to the sedan’s 419 L. With the seats folded, you’ll get 1,189 L. This either meets or beats many in the class for cargo room, though I did find the hatch opening to be a bit on the narrow side.

There is a good quite of tech available inside which includes an 8-inch touch screen for the infotainment with Apple CarPlay. There is also standard 4G LTE WiFi, regardless of which trim you choose. 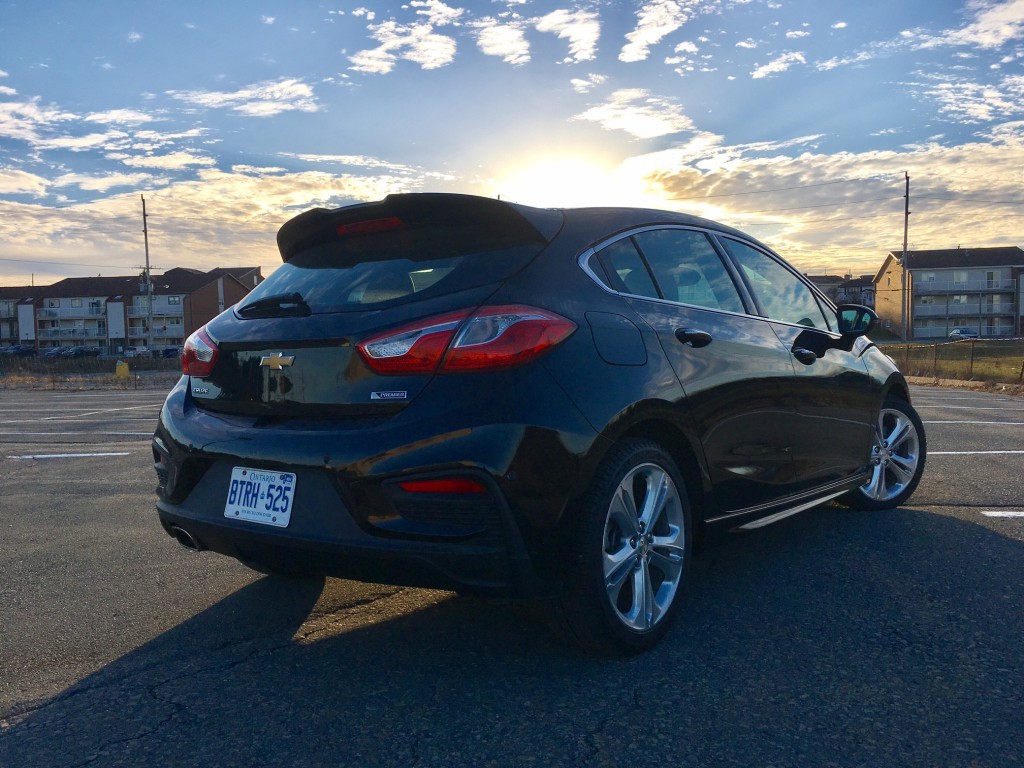 There’s only one engine available with the Cruze hatch and it’s a 1.4 litre turbocharged 4-cylinder which is good for 153 horsepower and 177 pound feet of torque. A manual transmission is available in lower trim levels but if you choose to treat yourself to a higher trim, you’re stuck with a six-speed automatic, though it should be said that is does a decent job at shifting smoothly. You can shift manually via the awkward button on the top of the shifter, but that’s it – no paddles available.

It should be noted that a diesel will in fact be making its way into the engine bay of the Cruze hatchback, and that will certainly be worth waiting for as Volkswagen is down for the count for diesel offerings, as we all know. A new 9-speed automatic will also become available which should also help out on the fuel efficiency front.

This is certainly adequate power, though this engine/transmission combo doesn’t have the same gusto as Volkswagen’s 1.4 litre TSI engine. It didn’t feel as if torque was readily handy at lower speeds either, you had to really hit the throttle in order for it to come alive. But once it does, you’ll be clear of the intersection in no time. This is also the only time when you’ll likely ever hear the engine, as it is very quiet under normal driving. 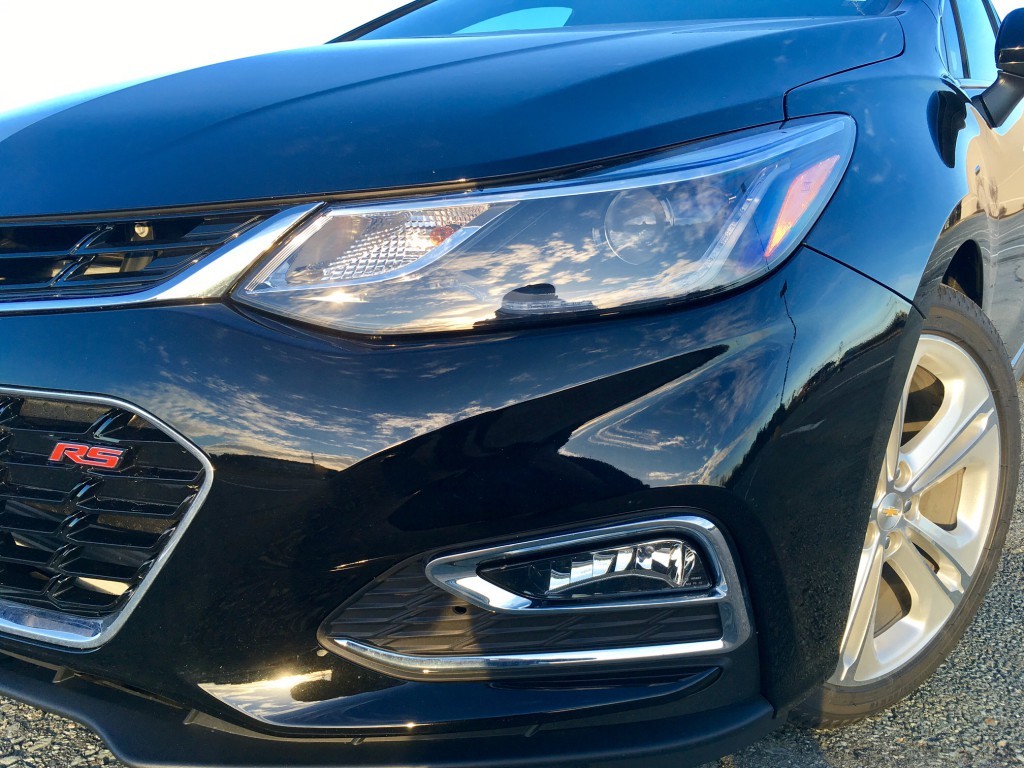 The Cruze hatch has composure perfectly adequate for normal driving and steering is nicely weighted. But if you’re looking for a more engaging driving experience, you’ll be more likely to find it in the hotted up versions of Ford’s Focus ST or Volkswagen’s GTI. It isn’t as if the Cruze falls completely apart in the corners, but you do reach its limits quicker than you would in the aforementioned vehicles. Otherwise, the Cruze can handle some mild to medium spirited driving with a planted sensation.

Generally, outward visibility is good; in fact, I noted how good the B-pillar is that checking your blind spot. The Cruze also gets a backup camera for ease in parking lots, though it is positioned quite low to the grown which initially takes some getting used to. Its compact dimensions makes parking a breeze.

On the highway, it feels solid, though bumps do get felt in the cabin though not jarringly so. The lane keep does a good job at keeping you in lane. The Cruze also feature front crash alert, however there is no adaptive cruise control. In general, passing isn’t an issue once the turbo kicks in. 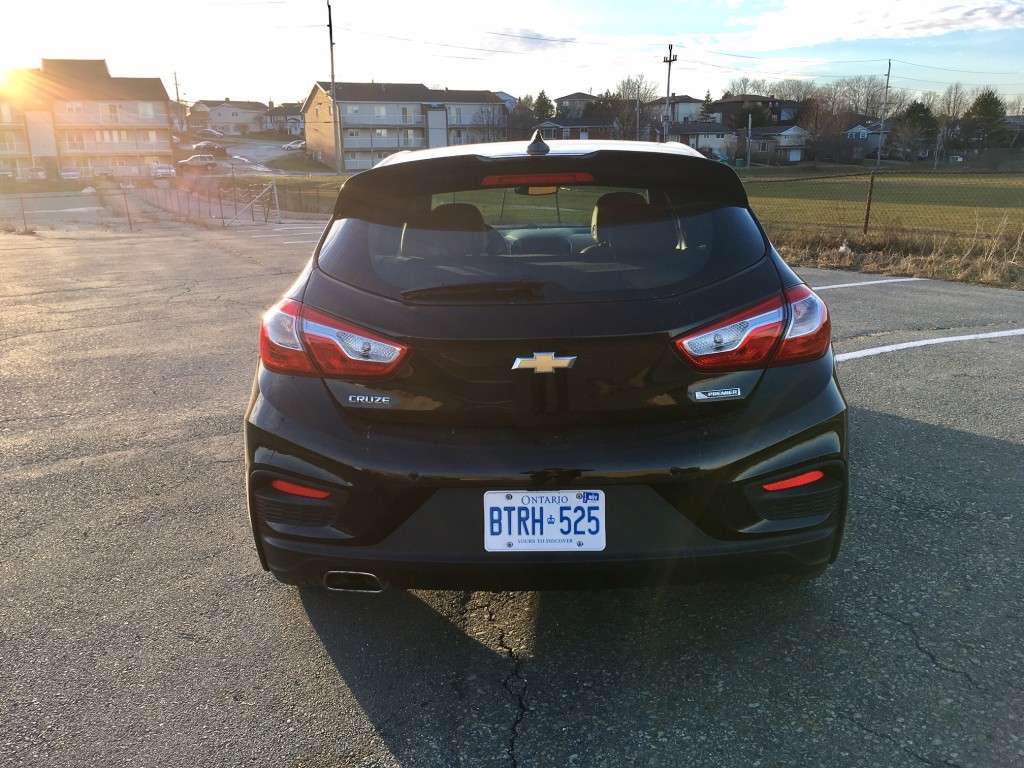 Official numbers for the Cruze hatch are 8.4 L/100 kms city and 6.4 highway. During mixed driving for a week, my real world mileage came in at 8.0 L/100 kms. This isn’t bad, but if you’d like to do better, again, wait for the diesel and/or the nine-speed automatic. 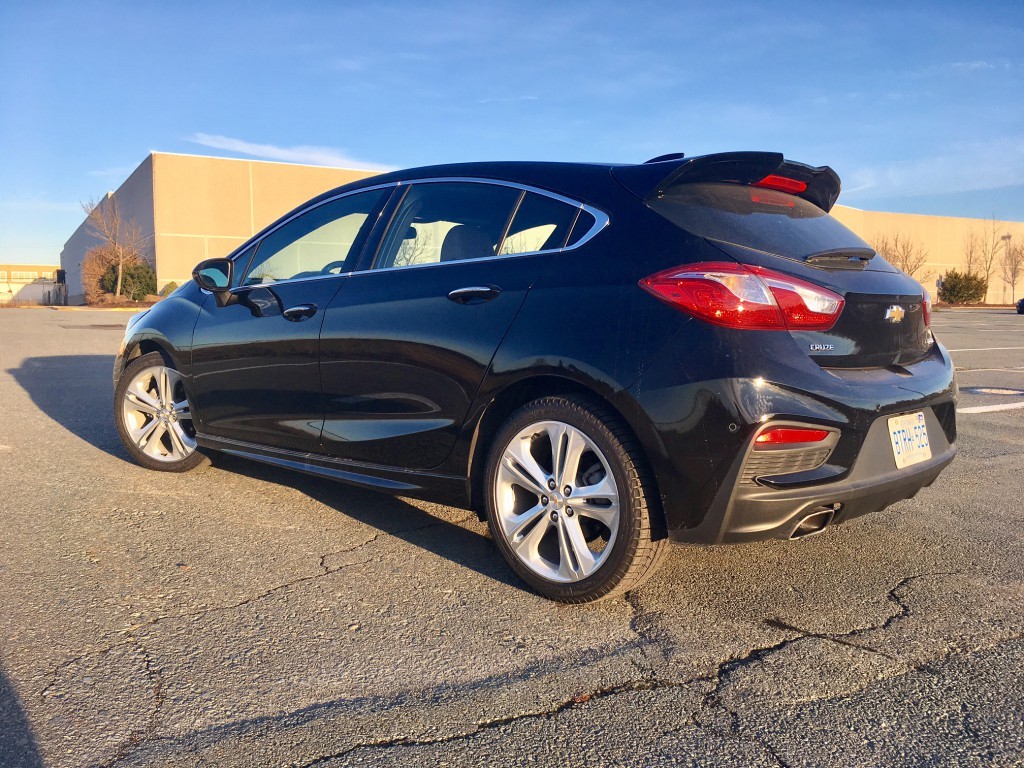 You hatch haters may not like it, but the only conclusion I can draw is that it is the best variation of the Cruze. It is just as big, but can handle more cargo, has a nice interior with decent driving dynamics and looks, at least to my eye, pretty darn good. Sure there are a few notable omissions but the overall ride and quality is where it needs to be.

Right now, Chevy needs to look out for the established players such as those from Volkswagen, Mazda and Ford, but they also need to look out for another newcomer: the Civic hatch.

But with the addition of a diesel engine and a new transmission, the Cruze hacth may just have enough to help it stand a part. If it adds some hotness to its hatch to battle the likes of the Civic Si, then I’d say the Cruze hatch line up would be complete. 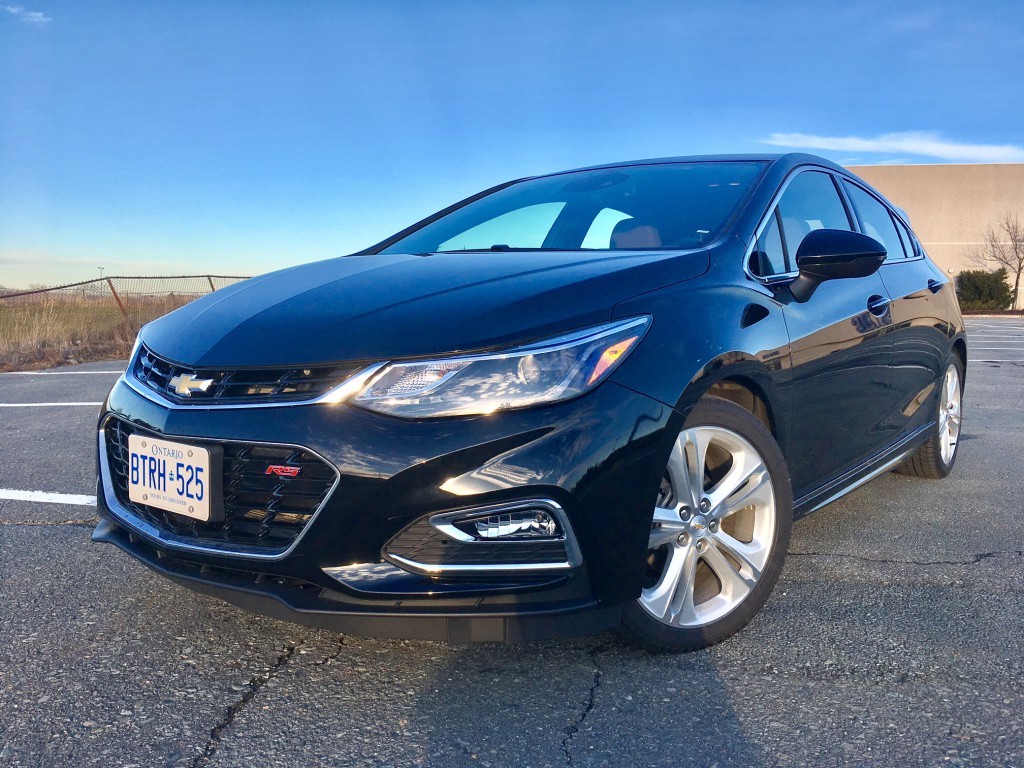