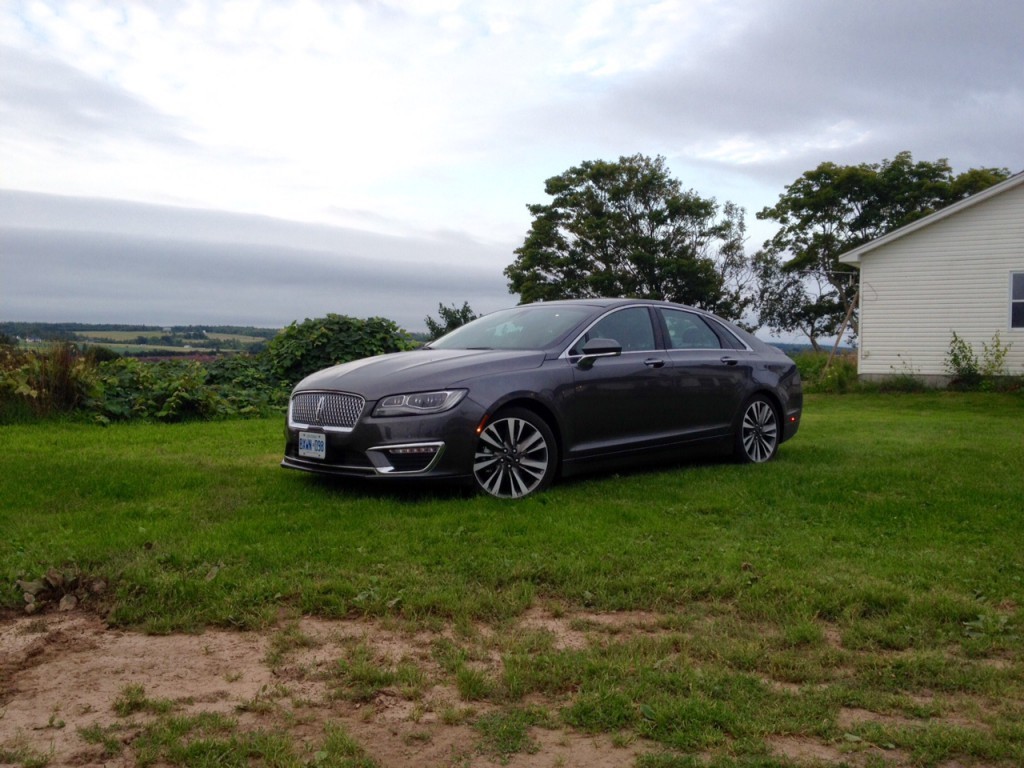 It seems Lincoln really wants Atlantic Canadians to take a serious look at the MKZ Hybrid.

In the six or so years that I’ve been receiving press cars, Lincoln has only sent three models for review. And guess what, all three of them were MKZ Hybrids.

This is odd since there offer seven different models to choose from.

It’s anybody’s guess as to why they might be pushing their lone hybrid offering on us Atlantic Canadians, but I due to some scheduling conflicts and a lack of press car availability in general, I was able to keep the latest version of the MKZ Hybrid for two weeks as opposed to the usual one week. While one week is usually sufficient time to form an opinion, the more time you get to spend with a car the more you are able to figure out what you like and, crucially, what you don’t. 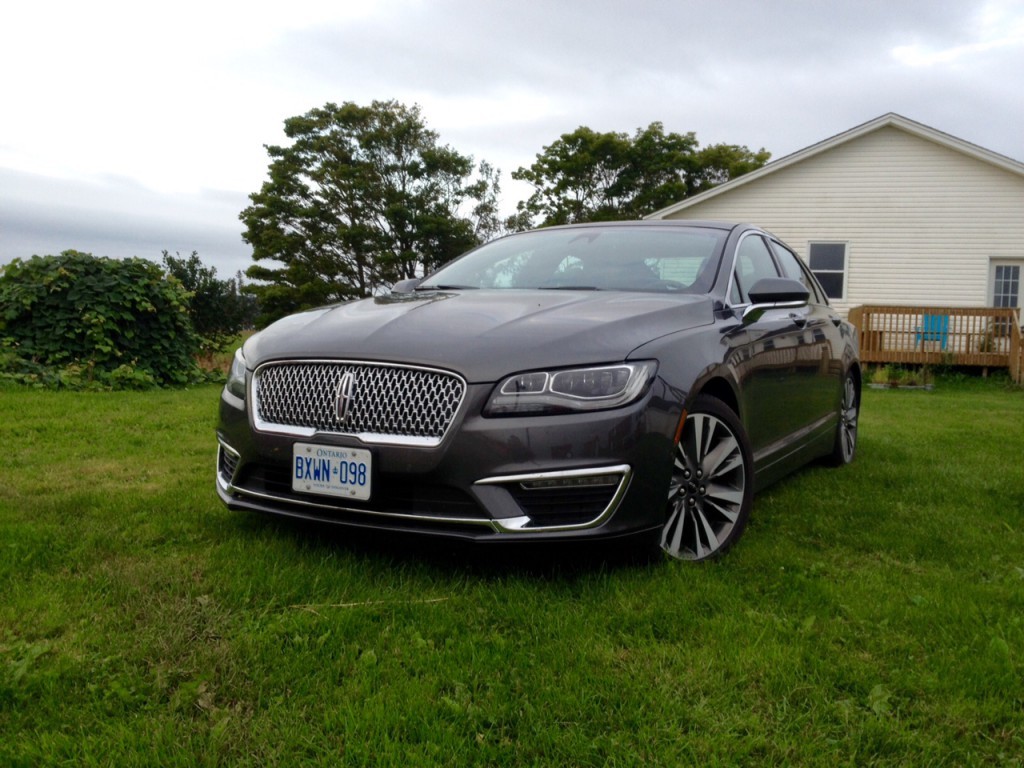 Perhaps the most notable change for the 2017 model year is a brand new face for the MKZ. The look is quite similar to the one seen on the new Continental with the same style grille, but the MKZ gets unique headlights. For the most part, the look is an improvement over the polarizing waterfall-style grille on the previous generation. The new front fascia not only garnered lots of admiration from those who set eyes on it, but most liked that the look seemed to blend design cues of both Jaguar and Audi. While I admit, if you’re going to take styling cues from other automakers, those two are good choices, but it seems as though Ford could have put a bit more effort into a more unique design, in my opinion.

Other exterior changes come in the form of new colour choices and wheel designs. The rear end remains largely the same as the previous model, which is a bit of an oversight in my opinion since others were unsure of its design with some commenting that it didn’t seem to match the front end of the car. 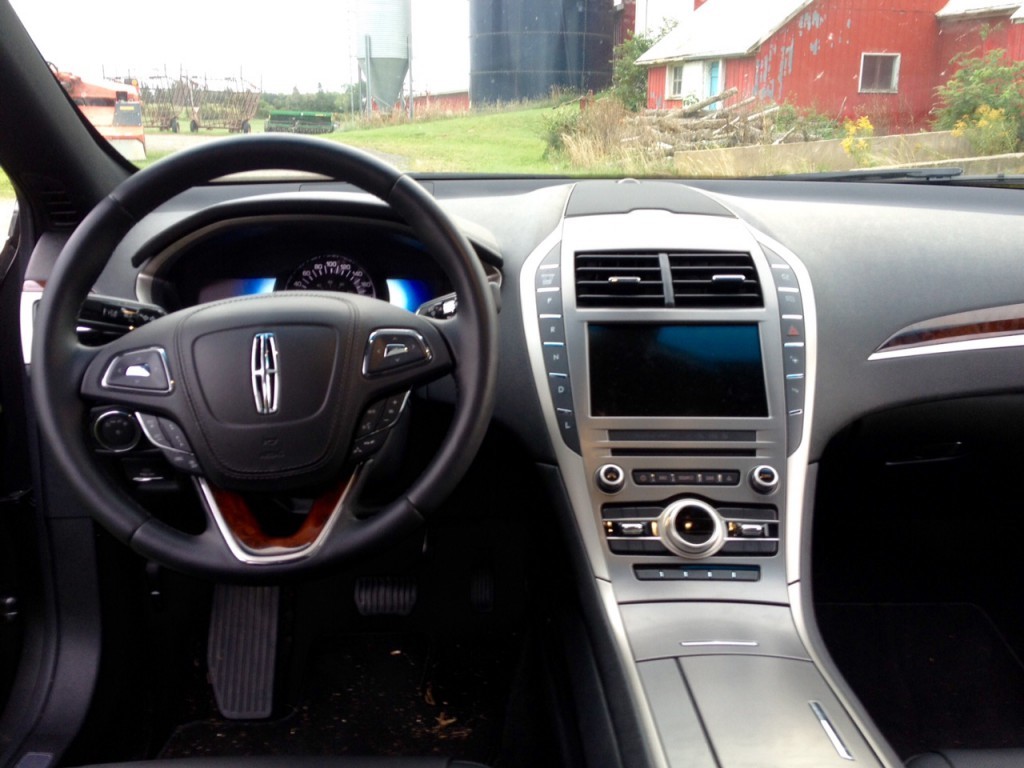 There are a few minor changes to the interior, most notably a re-worked centre stack. Now there are actual buttons for things like climate control, heated and ventilated seats and other functions you would be likely to use frequently. The old model had everything operated by the touch screen which meant having to dive into different menus and sub menus making for an unintuitive and frustrating experience.

The MKZ comes with Ford’s revamped version of the much hated My Ford Touch, called Sync 3 and it is rather improved. The menu options are more logically laid out and the design itself is easier on the eyes, though I found it only responded to commands about 75% of the time.

The transmission, unfortunately, remains as is. It’s located on the left side of the infotainment screen in the form of a column of buttons. While this may offer a cleaner look, it is still annoying to use and the buttons feel cheap on top of it. 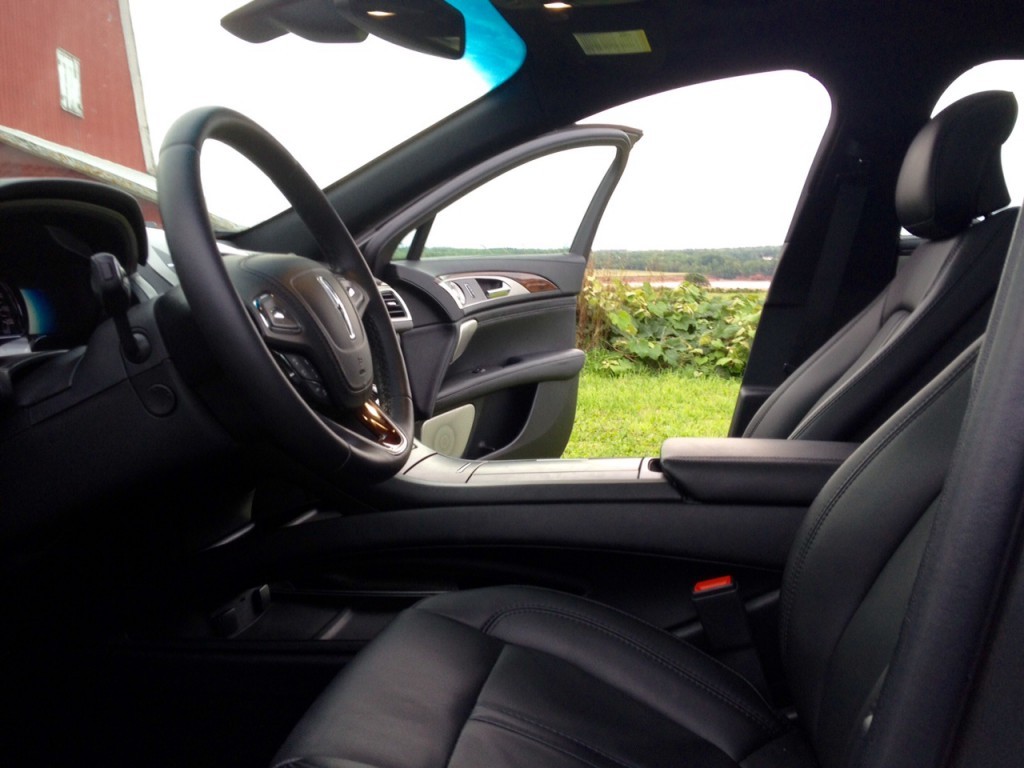 The dash display is clear, if a bit cluttered with the two menus on either side of the speedometer. These menus are customizable to house everything from distance traveled, to how much gas you used, to what’s currently playing on the radio. Once you finish your trip, you’ll even get a report card of how efficiently you drove along with a somewhat cheesy reassurance of your purchase which reads “Thank you for driving a hybrid!”

The seats are adequately comfortable with nice bolster adjusters and there is a massage function which was welcomed on long journeys, however it is far from a refined design. It uses airbags to simulate the massage which feels just a bit unnatural. I appreciated the ability to turn the seat cushion massage off while still using the back portion as I found it tended to push my wallet into my butt cheek. 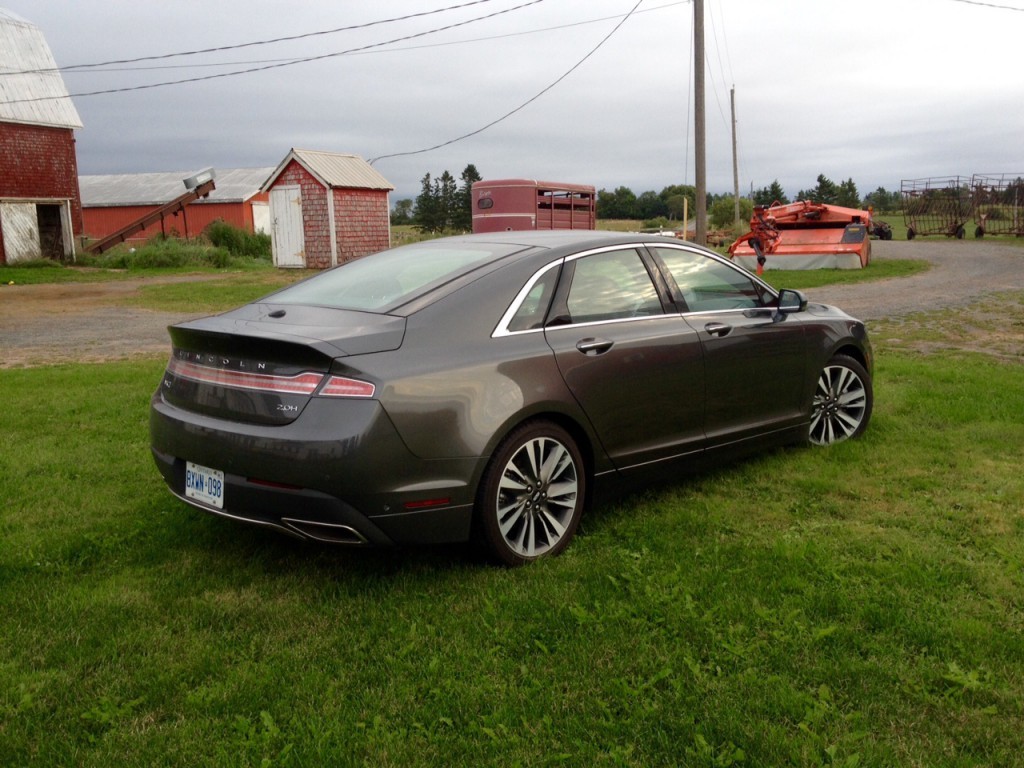 Rear seat room isn’t vast and entry is a bit on the awkward side thanks to the sloping roof design. You’ll also want to make sure that you aren’t relegated to the middle seat as the center hub is rather intrusive.

One thing the MKZ has going for it is the Revel sound system which produces audio more in line with the as tested price.

Overall, the design itself is nice however since Ford is making the design and quality of its mainstream product just as good these days I’d say more work needs to be done to make it feel more premium from say, the MKZ’s cousin, the Fusion. 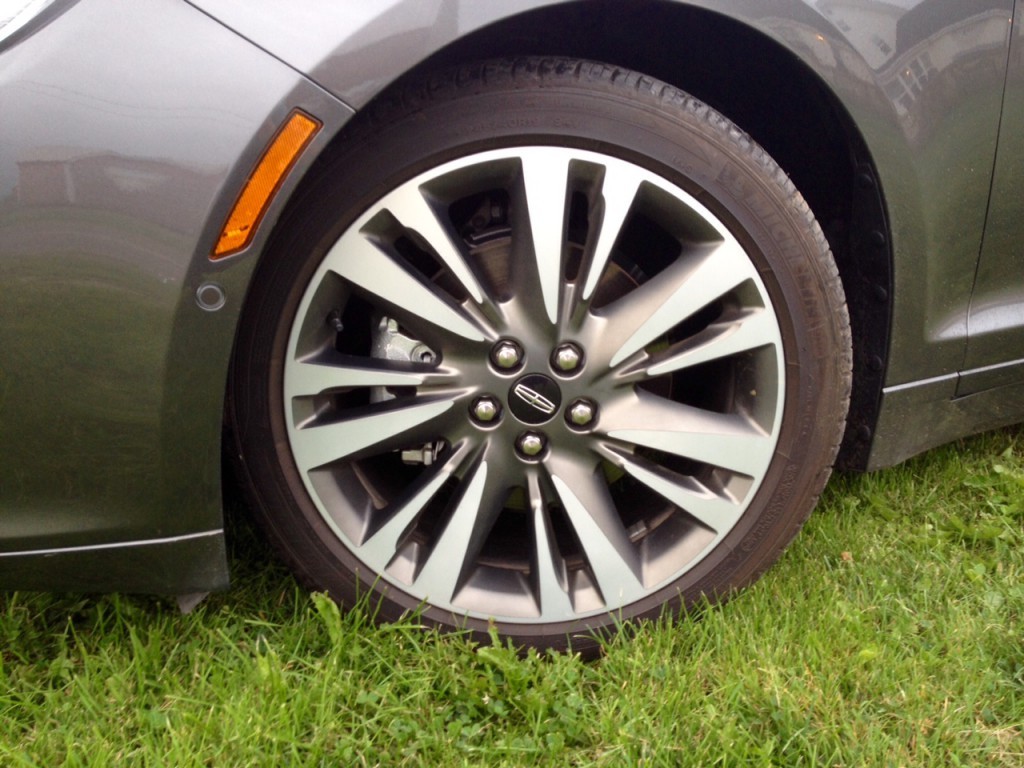 The hybrid gets a 2.0L Atkinson-Cycle I-4 Engine, which is good for 188 horsepower (combined with the electric motor) and 129 pound feet of torque. While this may be adequate for most, those low torque numbers combined with the MKZ’s mass makes it feel sluggish around town. This can especially be felt while merging onto the highway, and it isn’t necessarily done in the most refined manner either with the typical “hybrid whine” decidedly making its way into the cabin.

If you are looking for something with more pick up, the MKZ can also be had with either a 2.0 litre turbocharged inline 4 cylinder good for 245 horsepower or a 3.0 litre twin turbocharged V6 which makes a whopping 400 horsepower. Lincoln Canada – if you’re reading this – you really should have sent the latter for review! 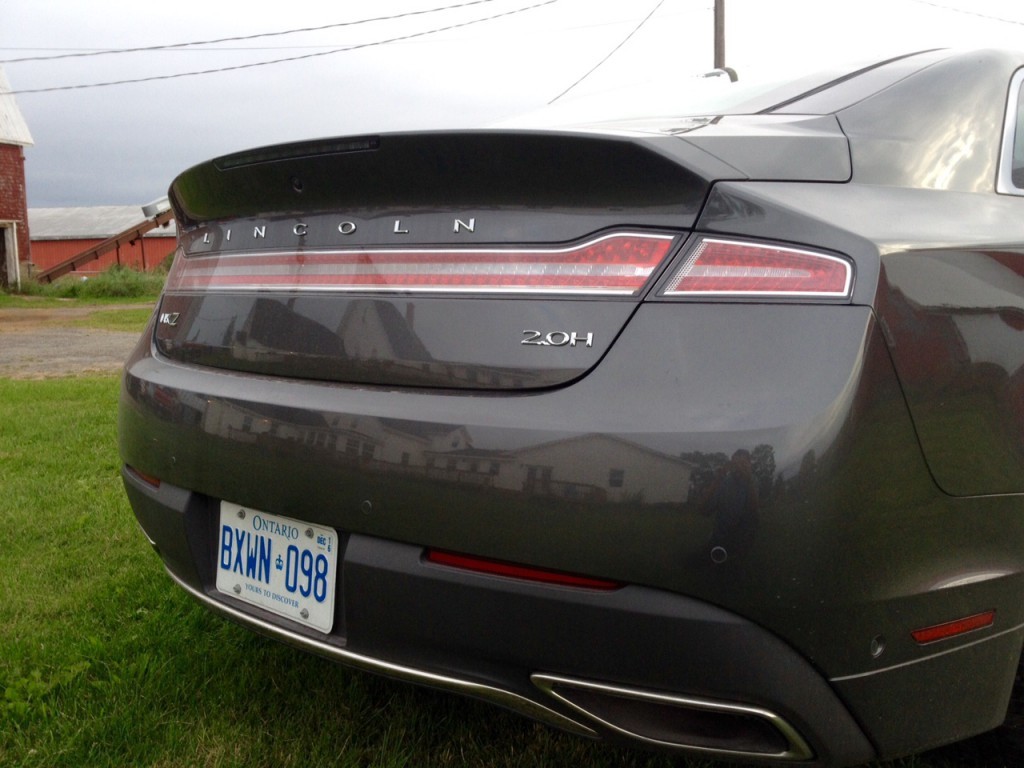 As mentioned, the MKZ Hybrid feels sluggish in most situations, but it has the ability to feel utterly comfortable and floaty, if that’s your thing. You’ll need to delve into some sub-menus, but once you find the driver select modes where you’ll find the comfort mode. The other modes don’t seem to alter the MKZ’s ability to any real degree.

The 19-inch wheels means you’ll feel some imperfections in the road, but in general the MKZ is comfortable.

On the highway, it feels stable unless you make any sudden changes in steering and that’s where the MKZ will feel as if it’s about to get out of sorts, even though it never really does. It also comes with a host of driver aids including adaptive cruise control (which works rather well), lane-keep assist, and blind spot monitoring. It even has a driver alert feature which will have a message pop up suggesting that you take a break. The way it works is a computer monitors your driving habits. If you are driving for a long period of time, and your driving becomes a bit more erratic (more steering correction to keep in lane for instance) then the message activates. If you choose to ignore it, it the alert will come back on with a more assertive suggestion that you take a break. Ignore it again and the message no longer becomes a suggestion. 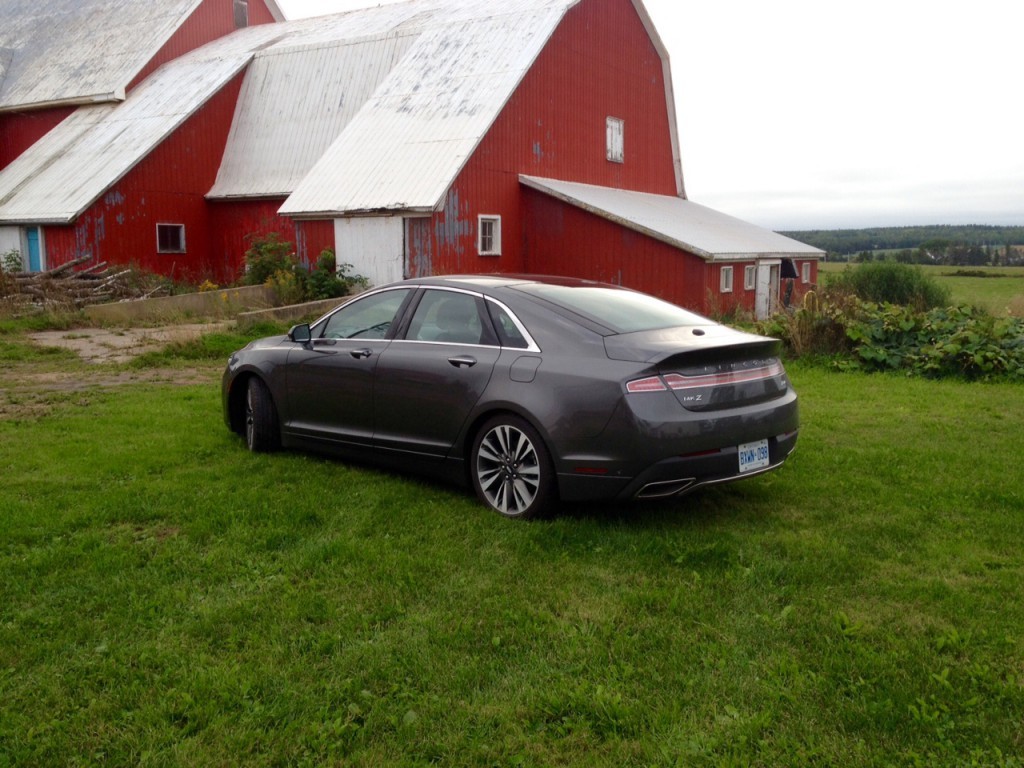 The MKZ hybrid is officially rated at 5.7 L/100 kms in the city and 6.2 on the highway. I put over 1,000 kms on it during my two weeks with a fairly 50/50 balance of city and highway driving. My result ended up at 7.2 L/100 kms which is good considering the size and weight of the car, but obviously well off the numbers Ford claims it can do. 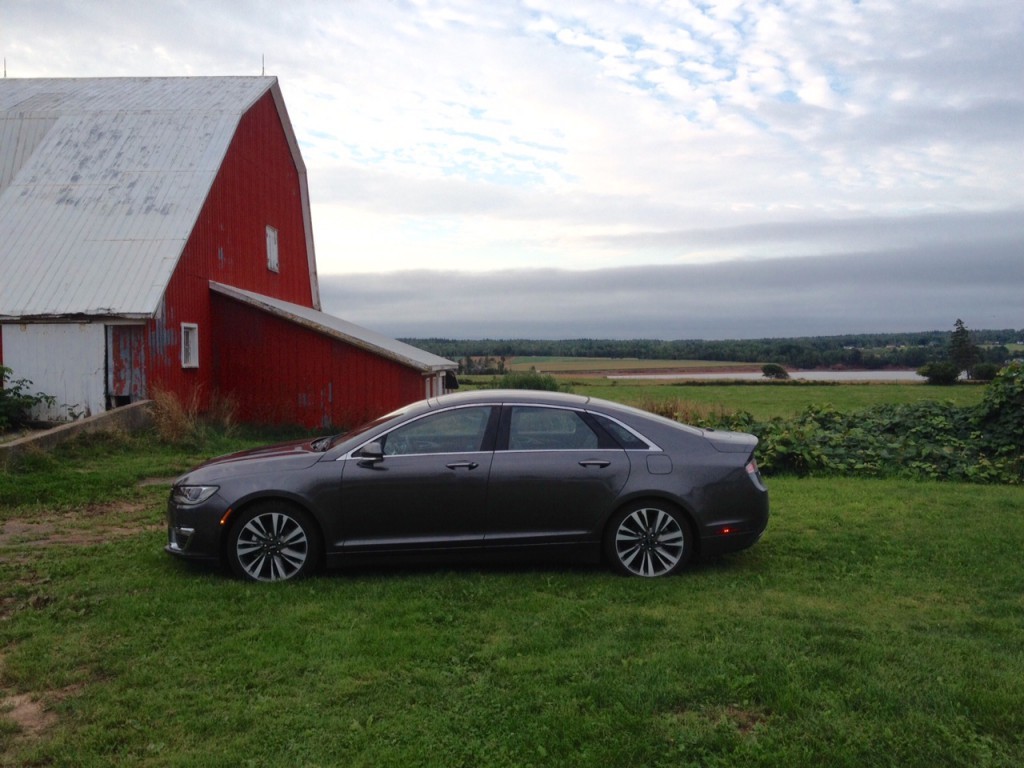 One upside, however, is that the MKZ Hybrid has the same starting price as the 2.0 litre turbo. Most other manufacturers charge a premium for the hybrid version of their models which can be thousands of dollars in difference in initial cost. This then puts in doubt how much money you are actually saving by buying a hybrid. But with the MKZ Hybrid, you don’t necessarily need to worry about making that decision. Or do you?

You see, as much as the MKZ hybrid has improved in looks and usability, the fact remains that the Fusion hybrid still exists and to be honest, it’s just as nice and can be as well equipped. Its base price is $27,293. That’s a huge chunk of changed saved, and definitely worth a serious look.