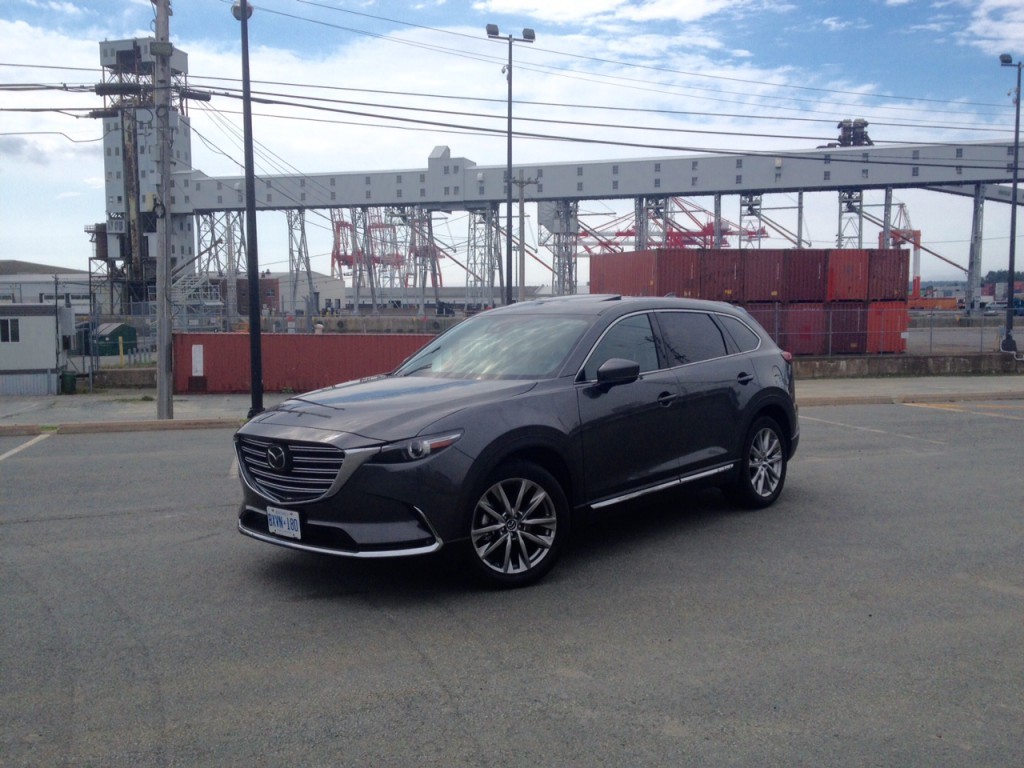 The other day I saw a first generation Mazda3 sedan in white by the side of the road with a for sale sign on it for private sale. I am not anywhere near in the market for a new car, but I always enjoy seeing what cars are going for on the used market.

The car looked to be in decent shape. Then I saw the sign: $600 or best offer.

I was taken aback. How could a car that has been wowing enthusiasts and the automotive critics alike for over a decade, have such poor resale value? Granted, I don’t know if there was anything grave going on beneath the skin, or what the kilometer reading was, but given the shape it appeared to be in, it still seemed very low.

Then I thought about it for a bit.

A former co-worker of mine had a first generation Mazda3, and it started to rust way earlier than it should have. She eventually got rid of it for a Chevrolet Cruze.

A friend of mine currently owns a first gen Mazda3 as well and it also has a rust problem. Unfortunately that’s not the worst thing wrong with the car either – it definitely needs a lot of work.

This trend is slightly troubling for the obvious reasons but also because Mazda knows how to make not only a great car, but a great quality car.

Without meaning to give away too much, their best example of this is the subject of this week’s review. 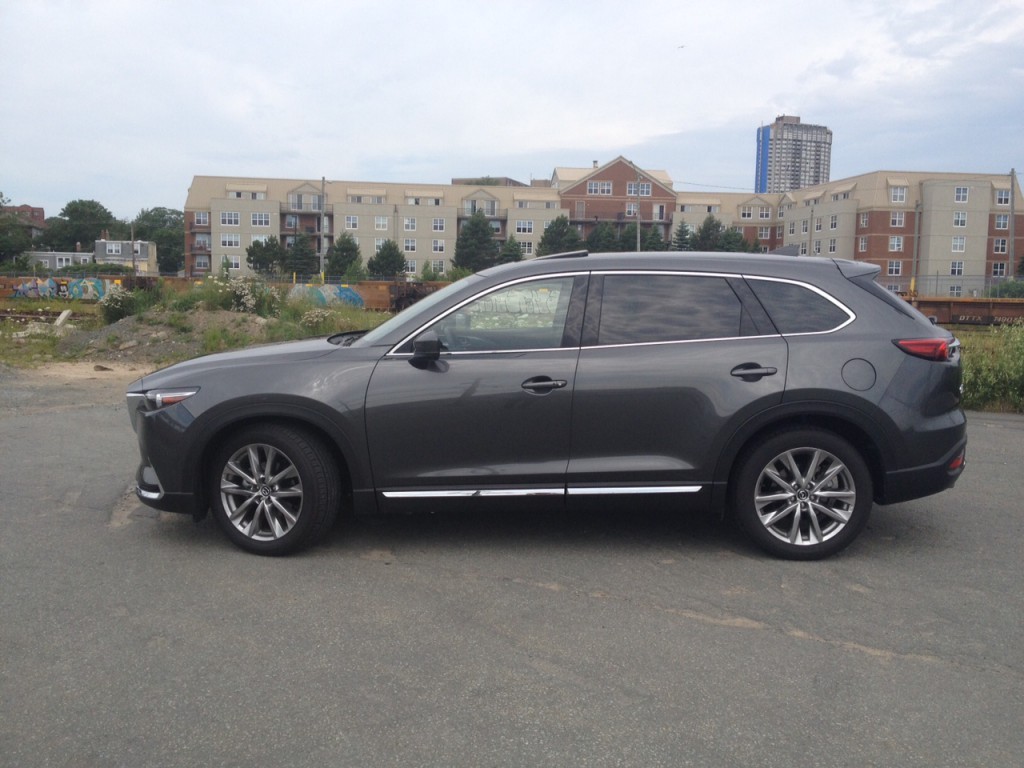 It’s obvious in the redesign. Mazda has an uncanny ability of making pretty cars. In fact, aside from the weird smiley face design phase they went through, each and every one of their models would be considered good looking to most.

Mazda did an excellent job of evolving the styling from the generation before it into the sleek and modern looking shape that you see in the pictures. It’s a great use of the kodo design language from the long low bonnet with pointed nose, to the high belt line and the eye catching head and tail lights.

It looks good from pretty much any angle and most that saw it seemed to agree. 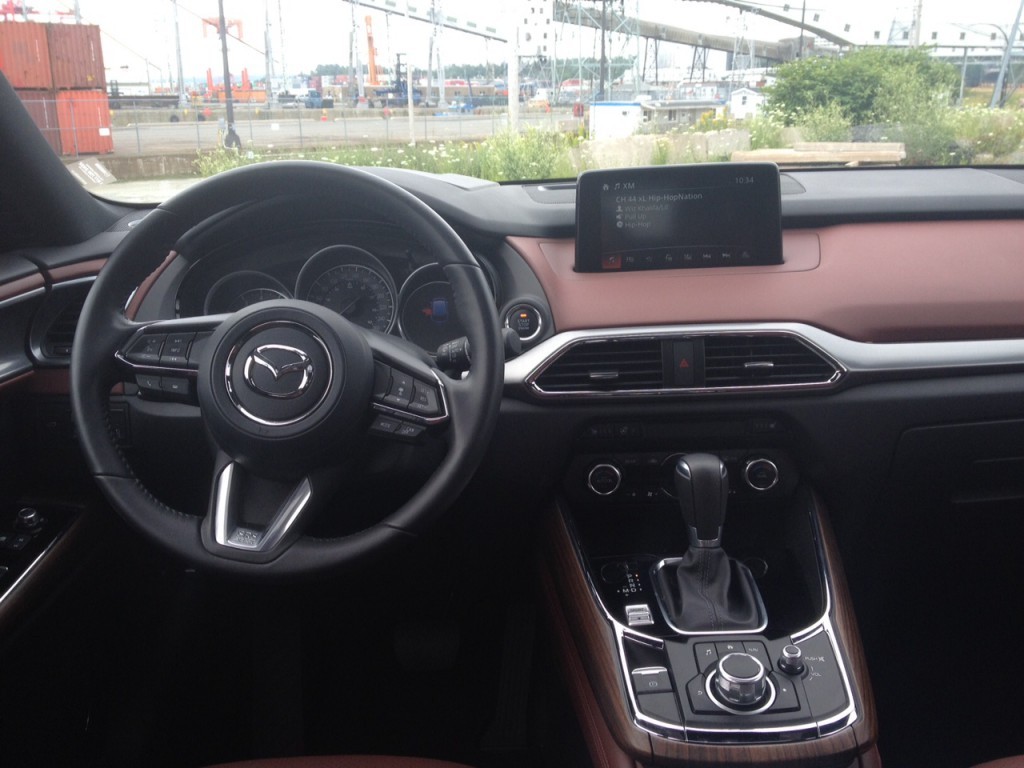 But while its exterior design seems to be more catered to a sporty look, it’s clear the interior designers wanted to convey a more premium feel. And did they ever hit the nail on the head.

My tester’s $50,000 price tag becomes a much easier pill to swallow once you step inside. It is very much in line with the price. Quality of materials is high and the design of the cabin is both classy and intuitive. In fact, I would wager that if you swapped the Mazda badges out for a badge from one of the German brands, none would be the wiser. If this is the best Mazda can do, then I would suggest they do it more often.

Mazda’s infotainment system does a good job at simplifying controls, though it can be a bit laggy at times, and the knob to control it does take a bit of getting used to. 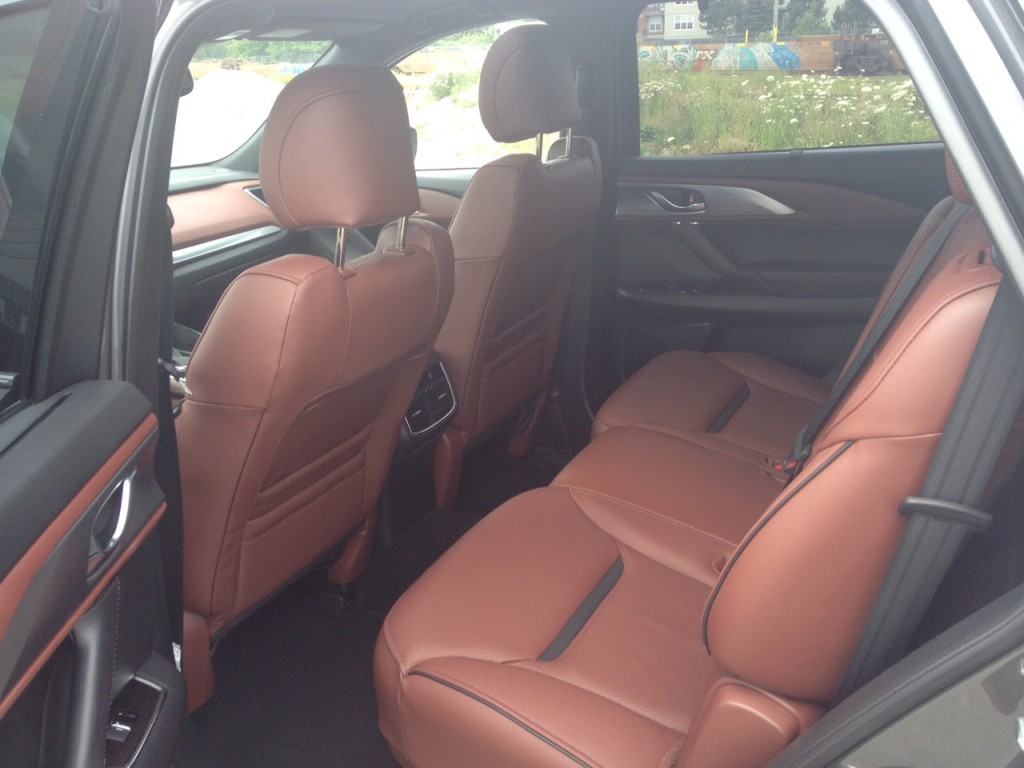 Interior room is more on the adequate side of things. It does the trick for the most part with acceptable leg and head room, but the reality is that it is outdone space-wise by the majority of its competitors. The third row is very clearly meant as a back-up only. You know, those odd times when you wish you hada bit more room for passengers, but don’t need the space more often than not. So if you are looking for loads of room, you may want to factor that into your decision when looking at the CX-9.

And while the top trim Signature version is very nicely equipped it still lacks certain features such as ventilated seats. And while the seats themselves are comfortable and the leather is of high quality, I did find it a bit difficult to adjust them to my ideal driving position.

Overall though, this is one of the better interiors in the class. 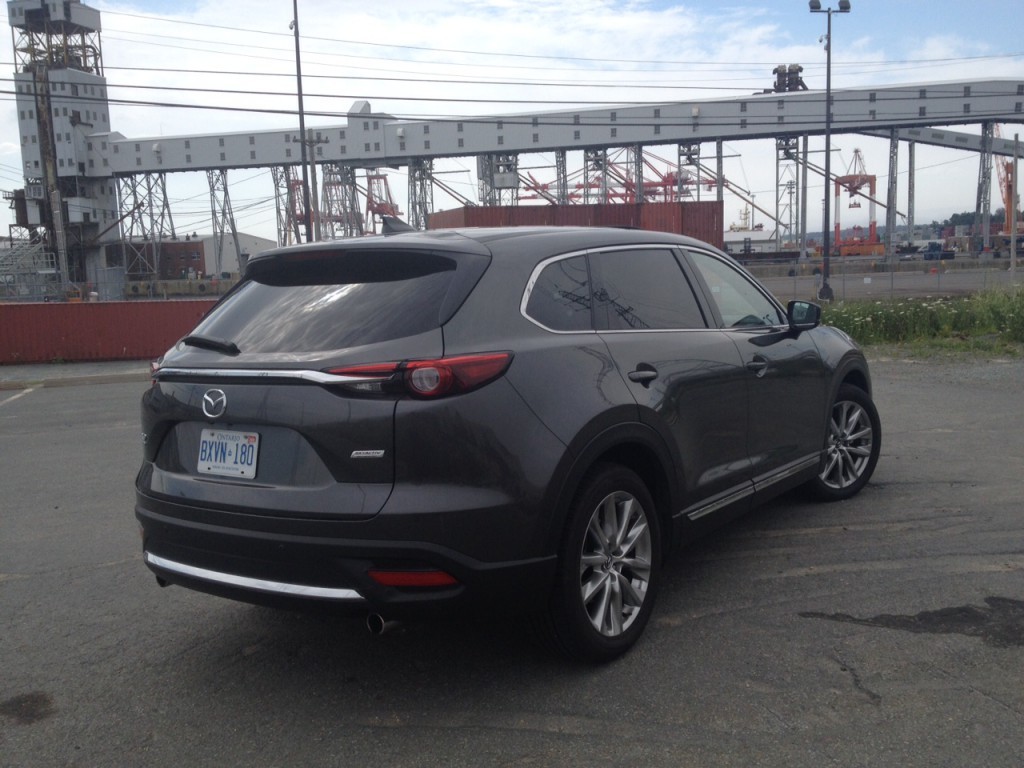 You may be surprised to learn that the largest and most expensive model that Mazda offers does not come with a V6, especially since Mazda is the self-proclaimed king of ‘zoom zoom’. Fret not, as the 2.5 litre 4-cynlinder is turbocharged to make a 250 horsepower and a hefty 310 pound feet of torque mated to a 6-speed automatic.

That torque number is key to hustling the big CX-9 off the line in a jiffy, though there is a bit of turbo lag in the process. Low end power is plentiful and it says with the power band up until you reach your desired speed. 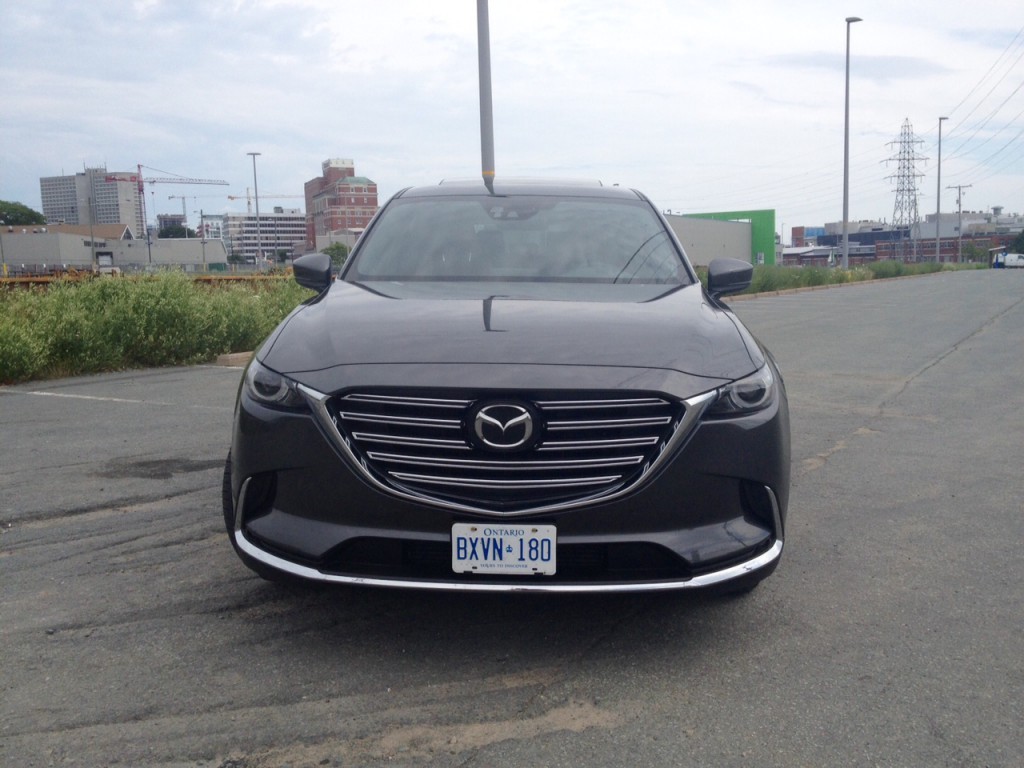 Those big wheels don’t necessarily translate into added jostling – the CX-9 remains reasonably comfortable, but tire noise was a bit of an issue. As was outward visibility which is a penalty you take to get that gorgeous styling.

Still, the CX-9 is quite capable on the road and is able to hustle through the bends with relative ease and minimal body roll all while maintaining its grace and composure should you be looking for more of a leisurely drive.

The CX-9 in Signature trim gets all the bells and whistles when it comes to driver aids too such as adaptive cruise control, blind spot monitoring and a back-up camera with an overview feature – great for backing into spaces or gauging how close to the curb you are. 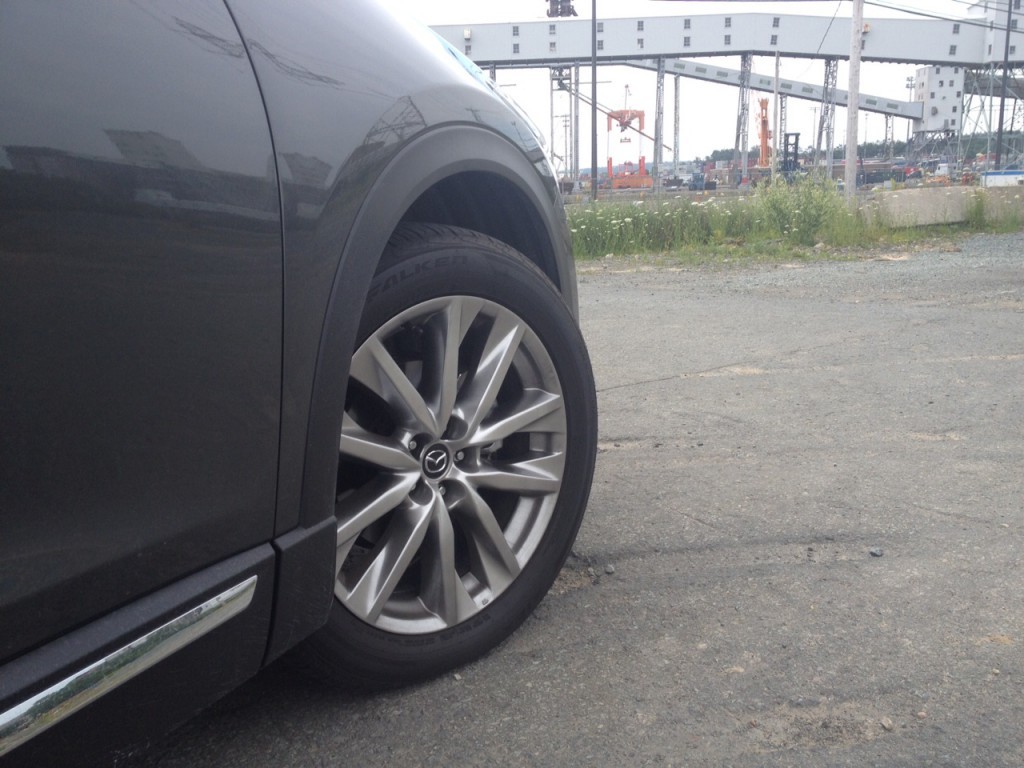 Officially, the CX-9 is rated at 11.2 L/ 100kms city and 8.8 highway. During my week of mostly city driving, I returned 11.2 L/ 100 kms right on the nose. I suspect you could to even better as I had the A/C on full blast more often than not and didn’t exactly drive with efficiency in mind for the majority of my time with it. 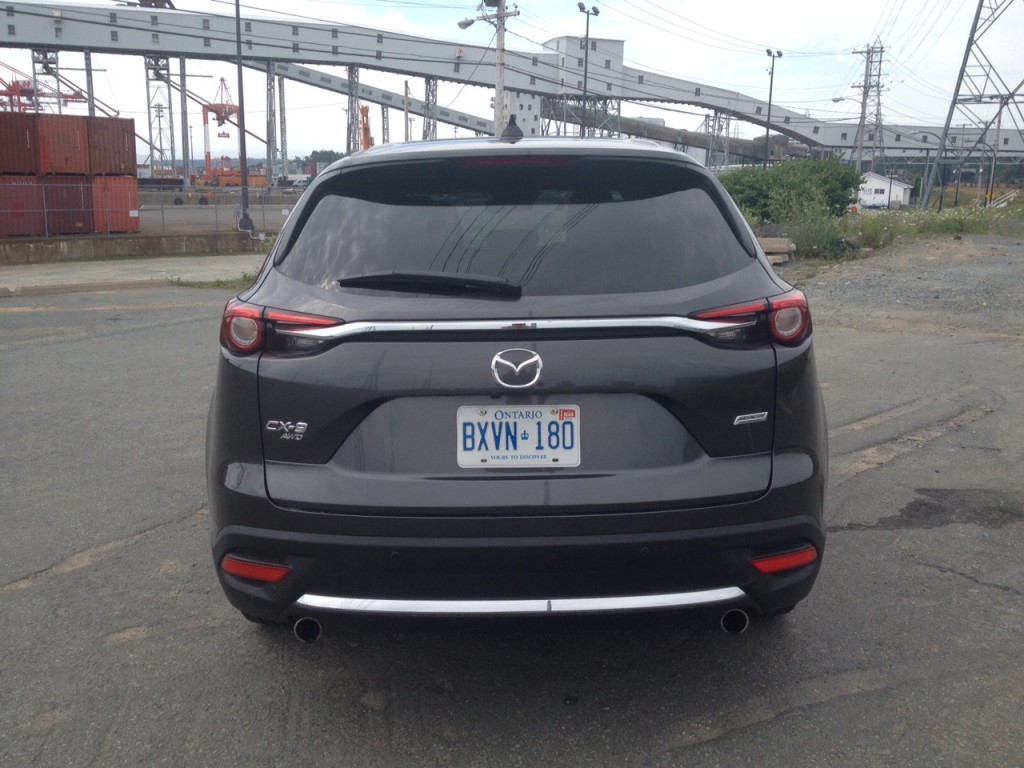 It’s about time that Mazda showed us what it’s really capable of. We all know it can make vehicles in ordinary segments more exciting to drive and look at, but Mazda has shown with this CX-9 that it knows how to make a quality vehicle as well.

Though I suppose time will tell if that’s actually true given the state of several used Mazda3’s I’ve seen.  I’m hopeful that Mazda has learned that it’s one thing to be the dear of the automotive press, but it’s another thing entirely if that great product can’t stand the test of time. One thing is for sure, Mazda’s CX-9 is a great example of what can be achieved when Mazda covers all the bases: style, performance, safety and quality. Its competition may excel in different areas, sometimes even better than the CX-9, but very few can claim to be great at all for categories. 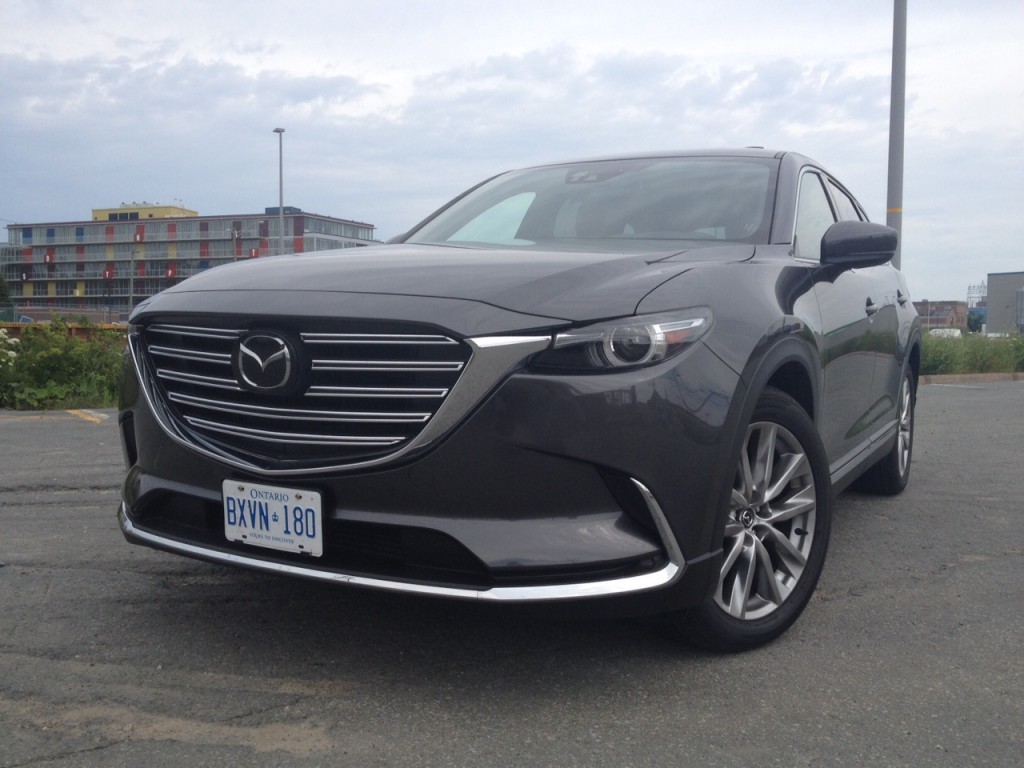