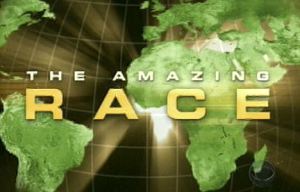 A train ride to Vienna? As a fan of Before Sunrise, I loved that. As a fan of The Amazing Race, this was a pretty boring leg – as stated in previous weeks, I think the show needs to up its game with the challenges.

For the Detour, teams had to choose between assembling and chandelier or matching up mask patterns at a masquerade dance. Both of these sounded pretty easy, but I’d choose Masquerade. Some of the differences were very subtle, but it was not incredibly challenging. Teams finished quickly.

There was also a Fast Forward in play, a bungee jump off one of the tallest buildings in Vienna. Cool! I’d be all over that. Jason and Amy arrived first, but the weather was too windy to jump. Amy wanted to wait, and Jason wanted to bail. They left, and no one else attempted it.

The Roadblock required one team member to play choir boy and learn a song in German. (I assume it was German, wasn’t it?) Jason and Amy managed to catch up with the other teams here, and it all depended on your ability to pronounce foreign words – and, your pitch. I enjoyed seeing the young Austrian boys smirk at how bad everyone was. Especially the little hipster in glasses. 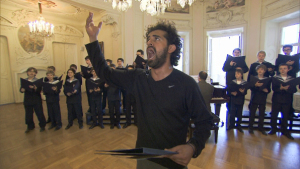 I felt bad for the players who were simply terrible singers. I’m not particularly musically inclined myself, so I felt their pain. This gave me awful flashbacks to awkward high school musical auditions. I always got a part in the chorus that was heavier on dancing than singing.

Travis was the first person to nail it, on I think his second try. Nicky had the pronunciation down, and even though she was tone deaf she could pronounce the words (her dad speaks German) and also got it on her second try. The Afghanimals got it next, and even I had to laugh at his delivery. Amy got it on her first try, which got her and Jason back in the running. Tim and Marie had stolen their cab, but it didn’t take them long to get another.

Travis and Nicole came first, the baseball wives second, and the Afghanimals third. Awful, annoying Tim and Marie came fourth and Jason and Amy came fifth. They bickered over the stolen cab on the mat, and it was dumb. It was just a cab. It didn’t even influence the results. I LOVED how Phil just stayed stonefaced and silent during all the drama though. Classic.

The bros and the ice girls were stuck at the Roadblock together, failing multiple times. On her fifth attempt, Ally finally got it. Tim also got it on his fifth attempt, but after the girls had left. They came sixth, and the bros were eliminated. I didn’t shed any tears, they were pretty bland.