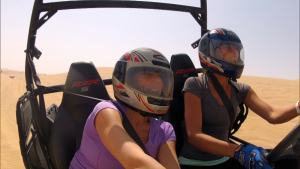 The teams remained in the Middle East this week on The Amazing Race, and with an Express Pass, Speed Bump and U-Turn in play, it was bound to be a tense one.

After some product placement and a simple code-cracking challenge, the teams were off to drive dune buggies to their next clue.

In Wedding Guests, teams had to complete a traditional dish for a wedding from a recipe. In Beauty Contest, teams had to identify a prize-winning camel and dress it up. Animals are unpredictable and can be difficult to work with, and I’m comfortable in the kitchen, so I would have tried Wedding Guests. However, camels are funnier, and sometimes it seems like the challenge that would make for better TV is the easier one.

Travis and Nicole used their Express Pass to skip the Detour, so they got to the Double U-Turn first. They used it on the Afghanimals, because of some inconsequential lie earlier in the race. I think they U-turned the right team, but it should have been because they are a threat to win, not out of petty revenge.

Jason and Amy, and Tim and Marie went for the camel challenge. The Afghanimals went for cooking because one of them owns a restaurant/bar. Tim and Marie’s camel got rejected on their first attempt, so they had to try and find a more handsome camel. They got it on their second try. Jason and Amy’s camel was super temperamental on their first try, but nailed it on the second attempt before Pinkie and the Bro had even found the U-turn. Jason and Amy got there first, but chose not to U-turn anyone. 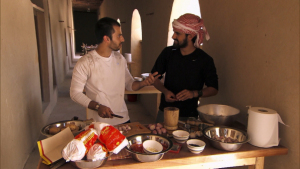 The Afghanimals quit the cooking Detour when they saw how quick Tim and Marie had finished with the camels. They also finished quickly, but because they’d been U-turned they had to go back to the cooking anyway. I rarely think it’s a good idea to quit a challenge, but they certainly proved that camels were faster than cooking.

Tim and Marie were STILL looking for the clue, far far away long after they’d finished the challenge. It lost them a bunch of time, and of course they fought over it. They U-turned the baseball wives, which was disappointing – I like them better than the ice girls.

The baseball wives cooked first, so they finished long after the ice girls had finished the camel challenged.

For the Roadblock, one team member had to navigate the world’s largest man-made rapids and grab three flags in the process. Nicole did it for her team and it looked challenging. A tall person would certainly have an easier time grabbing the flags. I was super impressed that Nicole completed it, she had to dive for one IN THE BOAT, IN THE RAPIDS. I say, that’s commitment. My husband says, that’s asking for an injury. We’re different.

Nicole and Travis were checked in as the first place team and won a car. Jason and Amy came second, and Tim and Marie came third.

The ice girls got lost, but arrived at the rapids just after the Afghanimals did. The baseball wives still had a Speed Bump to complete, so there was no way they could catch up. They had to cross a pool with manufactured 6-foot waves. Kim was afraid of heights, which made it even more difficult for them. They hadn’t even finished by the time the ice girls completed the Roadblock.

The Afghanimals came fourth, and the ice girls fifth. I’m sorry to see Kim and Nicki go, because they have more pleasant personalities than many of the other teams. But, they’d already been saved in other legs and couldn’t make it happen this time. Nice doesn’t win you The Amazing Race.