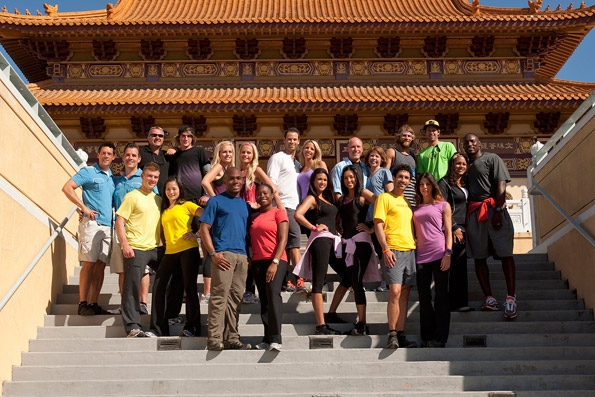 The Amazing Race is back, and with an interesting crop of teams this time – including, as you know, Ethan and Jenna of Survivor fame. I’m fine with this casting decision, although I have a feeling I’ll prefer the curlier half of that team more than the other.

I wish the show had premiered with a special hour and a half long episode, because it’s always so hard to keep eleven teams straight at first. It’s too early for me to tell which teams might become favorites without checking out bios and videos beforehand – something I pretty much reserve only for Survivor.

The race began in California, with a challenge to figure out the first destination – teams were given the letters WANPEI and had to find an umbrella with letters that, when used twice, would spell out the destination. “TAI”, resulting in Taipei, Taiwan. It was actually sort of confusing at first, since I was expecting teams to have to jumble letters around more.

Team Former Showgirls were the last to come up with the right answer, so they got stuck with The Hazard, a new twist that required them to perform an extra task at some point during the leg. The girls had tried to say they were much smarter than people assume, but then immediately undermined that when one of them (who can really tell them apart?) dropped her passport at the gas station on the way to the airport. S-M-R-T.

So, who really buys that it was Twitter to the rescue that helped these girls recover the lost passport? Or did the camera guy who got a shot of the important document lying on the ground possibly give those heroic hipsters a ride to the airport to ensure a team wasn’t eliminated in the first few minutes of the race? It was just all very bizarre.

Once in Taiwan, the teams were told to “look up” for their next clue – it was written in Chinese on a billboard, revealed by animated red and yellow balloons. Not a typical TAR clue and it threw a lot of people off (some more than others).

Hello hello, baby – you called, I can’t hear a thing

The clue sent teams to the Temple of Confucious, where they had to listen to a phrase from Confucious on a pay phone and then repeat it verbatim to a monk. The phrase was:

Now, I’m not saying I could have necessarily aced this on the first try, but I feel like I could have done it in five or less tries. It seemed like it took some teams dozens, especially Team Blond Twins. I don’t know who was worse, the one who kept botching the phrase or the one who wouldn’t stop shouting at her to do it right – like that’s helpful?

The twins fell so far behind that even Team Former Showgirl managed to breeze past them, (totally awesome!) extra task and all. They had to make a detour at a mall, where one team member was required to do an indoor bungee jump. Luckily for both of those lagging duos, there was another team still wandering around Taipei looking for their first clue.

Poor Bill and Cathi. They really blew it. (Only not really, but more on that later.) They just didn’t realize the balloons indicated a clue and walked all around looking for their instructions. It was sad.

They Got the Beat

For the final task, teams had to join a dragon boat racing team and cross a river, one of them helping to paddle and one keep rhythm with a drum. This task was pretty boring since there was really no way for teams to screw it up.

The first team to arrive was Ernie & Cindy, followed by Jeremy & Sandy, Justin & Jennifer, Ethan & Jenna, Amani & Marcus, Laurence & Zac, Andy & Tommy, and Kaylani & Lisa. Even though it took twins Liz & Marie FOREVER to finish that telephone task, it was obvious that they’d manage to finish second to last. Bill & Cathi didn’t have a snowball’s chance in hell.

And then they did. Because it was a non-elimination round. Really? That is such an anti-climactic way to end a season premiere. I mean, come on. I wouldn’t have missed them if they’d been eliminated. All in all, I thought it was a rather lackluster episode, but I always find The Amazing Race takes a few episodes to heat up. You need to get to know the teams, and that can take a while.

Based off a few first impressions, the teams that stand out for me are Amani and Marcus (the former NFL player and his wife), Laurence and Zac (the seafaring father and son team) and Andy and Tommy (the VERY stereotypical snowboarders). A possible dark horse team is Ernie and Cindy (the newly engaged couple ran a strong first leg). I was surprised that Ethan and Jenna chose not to mention their Survivor careers. They’re pretty well known and it just made them look untrustworthy. It’s possible they could go all the way, but it’ll be much harder if other teams gang up on them. Teams I don’t see going too far are bickering siblings Justin & Jennifer and Liz & Marie – but we’ve seen constantly fighting siblings make it pretty far before, so you never know.

Did you watch? What are your initial thoughts?