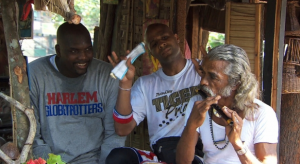 This week on The Amazing Race, the teams competed in Sri Lanka. It looked hot and crowded – not ideal conditions for running a race, but certainly fun to watch from the comfort of my couch.

Road Block – Who Wants To Fill ‘Er Up?

For the Road Block, one teammate had to 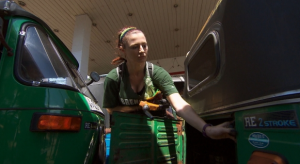 find four small taxis called tuk-tuks marked with a particular color, lead them to the gas station and fill up the tanks. On the hectic Sri Lankan streets, it was probably much harder than it sounded.

Rachel got there early, but thought her green card meant she had to fill up green cars – wrong. She needed to cars marked with a green card in the windshield.

Everyone was there at the same time and it was very competitive, but Big Easy completed the challenge first. Other teams quickly followed, and they headed off to their next stop – an elephant orphanage! I’ve never been more jealous. 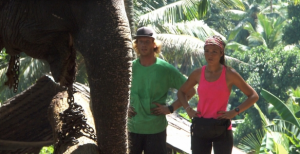 John and Jessica size up their new teammate.

The first Detour, “Trunk”, required teams to move logs with elephants. I was uncomfortable with that one – like, these elephants just work 9-5 jobs moving logs with chains? That’s not cool. I’m mad. In “Sheets”, teams had to make paper using elephant dung. Ew. I would want to hang with the ellies, so I would have picked “Trunk”. Even though I don’t believe in elephant labor.

A few teams tried each Detour, and they both looked difficult. “Trunk” was physically demanding and it looked like the weather was really hot, but “Sheets” was very tedious because none of the wet paper sheets could have bubbles. The teams who chose “Trunk” finished quickest though – the Cowboys, the Afghanimals, John and Jess and David and Connor took off first. Over at “Sheets”, the Globetrotters finished ahead of the other teams. 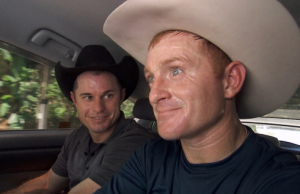 Jet and Cord. Don’t ask me who is who.

All the teams had to make one more stop for a clue before getting to the Pit Stop, and traffic was crazy. It came down to a foot race for first place between the Cowboys and the Afghanimals. Leo and Jamal managed to pull off a first place finish, with Jet and Cord placing second.

There was another footrace for third and fourth, with John and Jessica outrunning Dave and Connor.

Flight Time and Big Easy’s cab got lost on the way to the Pit Stop, which meant that Brenchel came fifth. UGH. Boooo. When it came down to the Globetrotters and the useless country blonds, I knew I’d be pissed if the Globetrotters went home. They’re way more fun! Luckily they managed to get there first, despite cab trouble, and got sixth place.

So Jennifer and Caroline were last – Phil said it was a close finish – but it was ANOTHER non-elimination leg. Haven’t we had enough of those? The blonds have gotten a lot of help from other teams over the course of the race, and now they’ve benefitted from good luck as well. But they can’t stick around forever.

The Amazing Race – “Down and Dirty”
https://haligonia.ca/the-amazing-race-down-and-dirty-91517/