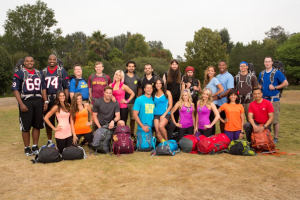 I was chatting with my mom today about how boring this season of The Amazing Race has been. Why is that? Are the challenges too easy? The casting too boring? Has this series just run its course? Maybe some combination of the three, but we’re both longtime fans who’ve never missed an episode, yet this season just isn’t holding our interest.

This week, the teams traveled to Poland via a 32 hour boat ride. Brutal. Because checking in with Phil wasn’t an official pit stop, no one was eliminated and all the teams got on the boat. 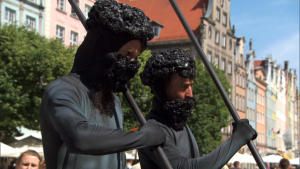 The Detour was the choice between posing as statues or learning a dance. In “Pose” teams had to raise money, which can be hard, but seemed easier than nailing choreography. 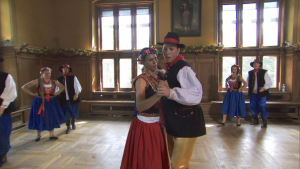 The baseball wives finished the statue challenge quickly, but when the bearded guys tried it they didn’t earn near as much money. They blamed their differing physiques, and switched tasks.

Jason and Amy killed the dancing, but the ER doctors and the boys really stunk. I can see Jason and Amy finishing in the final three, they’re pretty strong. A Double U-Turn awaited teams who finished the Detour.

Tim and Marie fell way behind due to a cab mishap, and used their Express Pass to skip the whole thing.

Who’s Got a Sweet Tooth?

In the Roadblock, one teammate had to search a huge apartment building for the right donut – biting into one in each apartment until they found one with the right filling. They had to be polite, too, which I knew would be a struggle for the pink-haired girl.

I loved when Travis hit all the elevator buttons when he took the stairs, while one of the baseball wives took the elevator. It was a great way to slow down the competition without being too malicious. But later, he helped Amy and Marie find the right donuts. He should’ve just taken off! I hate when teams work together.

Tim and Marie, Jason and Amy, and Travis and Nicole finished first through third, all together – though awful Tim and Marie were officially first and won a trip to Hawaii. Jerks.

The baseball wives came fourth and the bros fifth. When the Afghanimals arrived at the Roadblock, the ice queens were still there and I knew they’d work together.They found the right donuts together and moved on to the pit stop before Duck Dynasty had even arrived. The Afghanimals even beat the girls, arriving sixth instead of seventh. This is why you don’t help other teams!

I’m bummed that the bearded guys are eliminated. They seemed nice, and like they had potential to do well. There are so many teams left that I don’t like. Who are you rooting for?