In between making dinner and checking out the Oscars red carpet tonight, I caught The Amazing Race. Did you see it? If so, click through for a review! 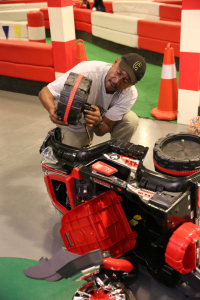 The Roadblock called for one team member to build a toy car.

Though they didn’t arrive first, Mark and Mallory left first – Mark absolutely killed the challenge! It was so fast. Unfortunately, Mallory left Mark’s backpack at the first site when they were transporting the car to the next destination. Oof. That’s even more awkward since they don’t really know one another. Mallory wanted to abandon it (she had his passport) and he wanted to turn back for it. I hated seeing them argue, because Mark hated the idea of parting with the backpack and Mallory had her eyes on the race. I could see both perspectives.

Margie and Luke, Dave and Connor and The Afghanimals (who’ve taken a liking to Mark and Mallory, because they’re adorable) left next.

(This review title comes from the tiny, adorable girl who kept bugging Flight Time as he was trying to build the car. “I’m going to complain about you” and “You sweat a lot” were among her gems.)

Jet and Cord arrived last to the Roadblock, even though they began the leg in first place – they got lost getting the first instructions, and wandered around looking for directions instead of jumping in a cab like everyone else. They seemed hesitant to get a cab in case their destination was near, which I think was silly.

Jet and Cord caught up pretty fast, and they gave the Express Pass to another team that was struggling – the country singing blondes. Really? WTF was that? I mean, I get that having the Express Pass was weighing on Jet and Cord’s minds, but that might have come in handy later. It benefited them in no way to give it to the blondes.

Featherball vs. That Weird Hot Glass Thing That Gwyneth Paltrow Famously Did

All the teams chose Featherball, which was kind of like playing hackeysack with a feather badminton shuttle. David and Connor finished first, but it wasn’t an easy task. The other challenge – hot glasses that get laid on your back and leave marks – freaked me out, but at least it sounded easy.

Mark and Mallory got his bag, but they struggled with the Featherball Detour. One by one, teams left, and they remained.

A bunch of teams arrived at the Pit Stop location all at once. Rachel didn’t even want to run, telling Brandon “It’s not like we’re running for last!” “But we might be running for first,” he shouted. And they were. They came first, and the finishing mat was like one big giant party. The teams that arrived within minutes of one another came in this order:

Stuff like this is why I can’t root for the cowboys. I just can’t condone giving away the Express Pass like that.

John and Jessica came eighth, and Joey and Megan came ninth. Mark and Mallory eventually completed the Detour, but they were eliminated. Everyone came out to see them off, and Mallory’s face crumpling into tears when they got the news was pretty damn heartbreaking.

These guys were facing a huge challenge in this race, both physically and personally. Racing is hard as it is, but racing with a near stranger is incredibly difficult. I felt really bad for them.

The Amazing Race – “I’m Going To Complain About You”
https://haligonia.ca/the-amazing-race-im-going-to-complain-about-you-90256/