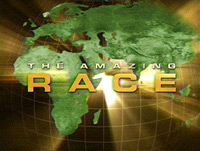 The Amazing Race: Oman and Wife

Wow. After watching Chad and Stephanie argue and bicker their way across the world, I can’t say I have high hopes for their impending marriage. The reality television based partnership of Rob and Amber these two lovebirds do not have. They’re not partners in crime, they’re frenemies. But hey, maybe the crazy kids will make it after all. I mean, if you can manage to oversleep by TWO WHOLE HOURS on The Amazing Race and still wind up in first place, then luck is apparently very much on your side. Seriously. That was frickin’ unbelievable.
A match made in Oman
The rest of the teams, who all managed to awake on time, ended up on two flights to Oman – the docs and Team Home Shopping caught the first flight (girl power!) that would arrive two hours before the second flight, which carried Nick and Vicki, Thomas and Jill and Gary and Mallory. The Sleeping Beauties couldn’t make that flight, and though I was hoping they’d slept themselves out of the competition, they ended up grabbing a flight that landed at the same time as the other teams. Life just isn’t fair. 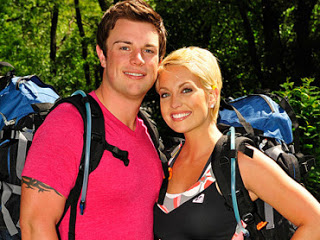 None of it mattered, since everyone ended up having to sleep outside a fortress where the next clue was located. All teams had arrived while they waited for the 7 a.m. opening time to roll around, and Chad went to drastic measures to kill time. And by drastic measures I mean he took his girl on a walk, got down on one knee and popped the question. To a girl that he’s known for less than a year, argues with all the time, and kind of treats like crap. I mean, seriously folks – the only reason they don’t have the worst relationship on the race is because Nick is such a jackass. Winning the title of “Best Boyfriend” this season is smack-dab in the middle of “World’s Tallest Midget” territory.
The clue inside the fortress instructed teams to drive themselves to the tallest mountain in Oman, where an actually qualified driver would drive them up the mountain. And this is where it all fell apart for my favorite teams. While most teams opted to ask for directions (take note, future racers) the docs and Gary and Mallory decided to consult maps. Like real, honest-to-goodness paper maps. Not Google Maps, which would probably be quite effective. Nick even pointed out that “It takes just as long to look at the map and try to get some understanding of it as it does to ask a local that for sure knows where to go.” I can’t believe I’m saying this, but he made a way smarter decision than the doctors and the pilot. I still hate him.
Rappell, Rappell
For the Roadblock, one team member had to rappell down a HUGE mountain and then search through tons of Aladdin’s lamps to find one with a ring in it. An interesting twist, but no one really seemed to struggle with the challenge very much. Teams breezed through the challenge while the doctors and Gary and Mallory drove around and around and around.
Next teams had to find a giant stack of books, which was incredibly cool  but should have been referred to as “a stack of giant books”. There were only, like, six books or something. But they were huge. It was cool. Then for the Detour, teams had to choose between “Water Table” and “Wedding Table”. (I was a little concerned that “Water Table” sounded vaguely like “Water Boarding” but the two activities were completely different.) Sadly, no one chose the wedding task. I hope those poor people had back-up soup.
The challenge required teams to fill a cute blue truck with water and then deliver it to a local residence. The race for first place was clearly between Chad and Stephanie and Jill and Thomas, and it looked like Jill and Thomas had grabbed another first place win when the guy they asked directions from was actually the cousin of the guy who they were delivering water too.
The final task was to head to a famous souq (marketplace) where they would have to deliver some frankincense to “the famous Ali Baba” (which Nick and Vicki later referred to as “Ali Baba in a suit”. Ha!) before making their way to the pit stop. The two couples sped through the challenge, and Jill and Thomas arrived in first…but there was a catch. They’d paid a taxi to lead them there, which was against the rules. They faced a 30 minute penalty which meant they lost the first place prize, a trip to Belize, to Chad and Stephanie.
Lost in Translation
Meanwhile, Vicki pretty much carried her and Nick to third place. She did the rappelling challenge. She got soaking wet at the Detour, which Nick couldn’t have cared less about. I do not understand how Vicki continues to be incredibly pleasant while Nick is the biggest jerkface ever. Do. Not. Get. It. Brook and Claire handled all the challenges well too (but no kisses this episode?) and landed in a respectable fourth place, despite getting into a teensy bit of trouble with police for driving the wrong way down a street. That meant two formerly strong teams were battling it out for last place. 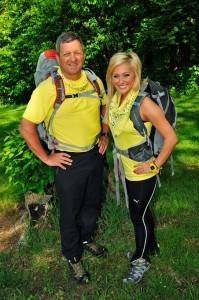 I felt really bad for both these teams, and I was really hoping for a non-elimination leg or a mischievous “You’re still racing” from Phil, but once other teams started to be checked I started to lose hope. The docs had a slight lead over Gary and Mallory the whole time, but it was still unclear who would find the pit stop first. Poor Mallory said they’d been driving around for nine hours, and she’d even resorted to praying in the car as they looked for the mountain with a new, rhyming prayer “Hail Mary, full of grace, please help us to find this place” (it should have ended with “so we aren’t eliminated from The Amazing Race”). Even though the souq reminded Mallory of her church, Team Father/Daughter could not pull ahead. The docs arrived in fifth place and Gary and Mallory were eliminated.
I don’t know about you, but I’m sad to see them go. They were like Superman and Baby Peach from Mario Kart, racing around the world. Also, had they not had such rotten luck this leg, I think they could have easily made the final three. Instead, we’re STILL stuck with all three Hairdressers and Jerk Boyfriends (and fiancees). Next week will bring not one but two U-turns – something I’ve never liked in TAR – but hopefully it knocks out some of the people I don’t like. That said, who should I root for now? Obviously, an all-female team. But do I go with the annoying ones or the boring ones? Help me decide!