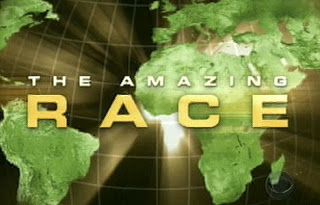 Wow, what an episode. Was anyone else yelling at Nick through their televisions last night? At this point, I don’t think it’s possible for me to hate the guy any more than I do after last night’s episode of The Amazing Race. First he screamed at and berated Vicki for slowing them down…with her asthma. Something that is totally out of her control and could be causing her serious problems. Then later in the episode, Mr. Suck It Up himself quit more than once. When Vicki got sick at the food challenge, he suggested packing it in. Then on the boat, he almost literally laid down and died.
Nick’s performance this week was so despicable that I really wish he’d told Phil to take his non-elimination leg and shove it, because he was going home.
I’m on a boat!
The leg kicked off with all teams traveling to Hong Kong on the same flight. Even though I don’t want Jill and Thomas to win (but am scared that they will), I felt bad that they lost their epic lead. I was also impressed with how they handled a confrontation with Brook and Claire, the recipients of their U-turn in the previous leg. They said it was just because Brook and Claire were more competitive and thirstier than the other teams, and that made them a threat. As apologies for U-turns go, I thought it was a pretty good one.
Once in Hong Kong all the teams had to catch a ferry, which is where Nick and Vicki fell a little behind. They missed the ferry that everyone else caught and had to wait half an hour for the next one. Is that a bummer? Definitely. Is it a game-ending situation that warranted Nick’s behavior. Certainly not.
Fake Plastic Food
It was pretty funny when Claire pointed out that every time she volunteers for a Roadblock it ends up being much harder than she thought (cue clip of Claire getting a watermelon in the face). This week the poor girl thought she was signing up for a karaoke contest. Instead, the players had to pick out the fake display food from a table of traditional Chinese cuisine. The catch was that any real food they touched would have to be eaten. Oh, and they had to do it while a bunch of local people looked on, laughed, and watched Brook sing and dance and act all crazy (a.k.a act the way she always does).
Nat finished the food challenge first, followed by Thomas. When Nick and Vicki arrived Claire (an admittedly picky eater) was still there. Claire and Vicki both had a rough time with the challenge. Claire puked first, which Nick took great glee in, and then yelled at Vicki when she was kind enough to offer an “Are you OK?” to her opponent. Claire finally found a fake piece of food and moved on while Vicki was left to eat and eat while the crowd started to leave and the kitchen staff started to clean up. And then she threw up.
The fact that Vicki was even doing that challenge after having a rough time with her asthma that day made me mad. The fact that Nick so eagerly suggested taking a penalty when Nicki, in between gags, said she didn’t want to quit also made me mad. Finally, poor Vicki made it and they moved on to the Detour.
By the way, am I the only one who thought the producers went a little far by actually following the girls into the washroom (and practically into the stall!) while they threw up? Come on, guys! Give a girl some space!
Searching the Sea
For the Detour, teams had to choose between “Ding Ding” and “Sampan”. The two leading teams, Nat & Kat and Thomas & Jill, originally chose different tasks. Jill and Thomas went for “Ding Ding”, where they boarded a bus and searched for a sign. The sign, which said “Pit Stop” totally blended in with all the other neon signs in downtown Hong Kong and seemed near impossible to find. They eventually quit and headed to do “Sampan”, which Nat and Kat were struggling with as well. There, teams had to deliver a cage of parakeets to a boat with a matching number. The water was filled with boats with long, nonsensical numbers painted on different areas of the boats.
Jill and Thomas seriously lucked out and found their boat quickly, even though Nat and Kat had been searching for theirs for what seemed like a long time. Soon after Jill and Thomas left, though, the docs found their boat and headed off. It looked like the couple would score another first place finish, but in an exciting twist Nat and Kat managed to find a cab first and scooted into a first place finish. Jill and Thomas came in second. It’s now crystal clear who the frontrunners in the race are, with Brook and Claire as the dark horse team.
Brook and Claire and Nick and Vicki did the boat challenge as well, but with drastically different attitudes. Brook and Claire kept their spirits up, but Nick completely gave up. He laid down in the boat and tried to sleep and periodically whined about how he wasn’t having fun anymore and wanted to go home. Frustrated by the fact that she was searching for the boat by herself while her boyfriend repeatedly told her he was done, Vicki eventually agreed to give up and head to the pit stop.
Lucky Losers 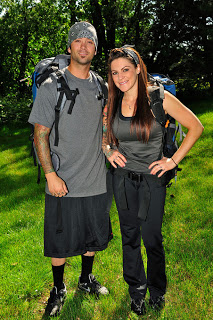 When Nick and Vicki arrived at the pit stop they received the news that they had a six hour penalty for bailing on the Detour, and that they were still in the race. Vicki looked relieved, and Nick looked disappointed. I was so angry with Nick about his behavior this leg that I really wish that he’d just quit the race, and that Vicki had dumped him on the spot. She’s been tough, patient and consistent throughout the race and deserved a better partner, and she definitely deserves a better boyfriend.
What did you think of the episode? Could Nick and Vicki possibly make up the time in the next leg and land in the final three? With only two episodes left, who are you predicting for the winner? And do you think Nick will ever become less of a jerk?

The Amazing Race: Quitters never prosper...except for when they do
https://haligonia.ca/the-amazing-race-quitters-never-prosperexcept-for-when-they-do-29727/