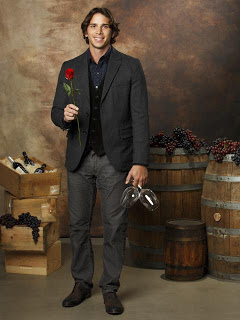 Have you ever noticed that on The Bachelor the dudes always want girls who are willing to move to their hometowns, yet so often on The Bachelorette the leading lady is willing to relocate to the hometown of her selected beau? Just an observation. Anyway, since Ben’s got a nice career going for himself as a winemaker in Sonoma, California, he decided to bring all the women there to stay instead of kicking off the “journey” in L.A.

If they weren’t about to go on a huge round-the-world love tour, I’d give Ben props for this. Strolling the town in which you’ll actually reside? Eating at restaurants you’ll actually dine at? Oh my goodness, this all sounds far too realistic for Team Bachelor. What have you done, Ben?

Don’t worry. Ben kept the ridiculousness of this show in tact  by proving throughout this episode that he has absolutely no knack for picking out the crazies. So let’s talk about the show.

And the First Date Curse goes to…

Whoever gets the first date never gets the guy, this is a fact. It’s like when Survivor used to give away a car in one of the last few reward challenges, and that person never won the million bucks. Of course, I’m way too lazy to actually research either of these things to determine if the myths are true, but feel free to look into it yourself and get back to me. 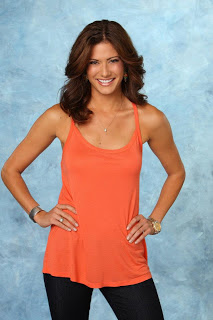 Ben hand-delivered the first date curse (No Chris Harrison or accent table! I hope Ben was tipped for this extra task) to Kacie B., a 24-year-old administrative assistant from Tennessee. For someone who’s supposed to be a sweet Southern belle, I was disappointed that she didn’t deliver in the wardrobe department. Hasn’t she seen Sweet Home Alabama? She’s supposed to wear a cute floral or white dress with boots, not booty shorts and a striped sweater.

The date kicked off with a stroll through desolate Sonoma. What time was it, 2 a.m.? It was dark and there were no people anywhere! Is this town’s motto “Sonoma: A Great Place To Get Raped”? Creepy. Anyway, Kacie purchased a baton at a local store (you know, as one would) and showed off her baton twirlin’ skills to Ben. Then over dinner, the two talked about Ben’s dead dad. Oh dear, you can already tell that any mention of Ben’s deceased father would make a deadly drinking game. I forgot that ever since Bachelor Brad came back for a do-over the show likes their bachelors and bachelorettes to have learned a life lesson, whether it’s through losing a parent (Ben) or enrolling in dance classes (Ashley).

My favorite part of the date was when Ben told Kacie why he agreed to do The Bachelor as he gave her the date rose. “This worked for me once,” he explained. Er…was there a season I didn’t see? Or did this guy actually just chalk up a rejected proposal and public humiliation as a success? Let me know if he wants me to poke him in the eye later to celebrate his appearance on the show.

After dinner, the two went to a local movie theater. Stupidly, I thought “Oh wow, are they going to watch a movie? Are they going to do something normal?” I blame my moment of idiocy on the fact that I have the flu – OF COURSE they weren’t going to do something normal! They watched home videos of each other. A bit much for the first date, even on this fast-tracked Bachelor timeline, right? 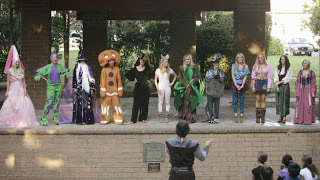 Next up, a massive group date with Ben and twelve women. This is always something really stupid, like filming a commercial or boxing. It seems that Team Bachelor really likes getting these folks to “act” in something so they can script a few first kisses – just in case the rest of the show wasn’t contrived enough, y’know? Ben was joined by Brittney, Rachel, Jennifer, Blakeley, Emily, Jenna, Shawn, Monica, Samantha, Jamie, Nicki, and Jaclyn – or, as Ben said, “a lot of pairs of legs.” Because that doesn’t make him sound like a creepy fetishist serial killer or anything.

What followed was a waste of time so great that my mom called to question why we even watch this show. (Because it’s funny!) The girls had to audition for and act in a play written by some local children. Guys, this was super weird. I knew I was uncomfortable when one boy asked Blakeley, who was dressed in what appeared to be one child’s spare set of overalls, to run in slow motion across the stage. Eventually, the women performed the play at the Sonoma community theater. 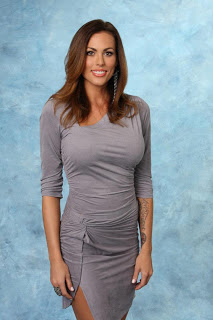 The women might have acted in a play, but the real drama came during the cocktail party that followed. These massive group dates are always a gong show. This one was dominated by Blakeley, who bragged to the other girls that she was going to get the date rose, made great “conversation” in the pool with Ben by sticking her tongue down his throat within the first 10 second of their alone time and then, yes, actually getting the date rose. In this video interview, Ben said he was looking for professional, older women. Well, I suppose he didn’t lie. At 34 (or “34”?) Blakeley is certainly older, and isn’t “VIP Cocktail Waitress” like, the world’s oldest profession?

Time for the next date! Kacie B. and the so far dateless women are all hanging out at Casa Chlamydia 2.0 (Sonoma Edition) while Courtney works on undermining their collective confidence. When the date card arrives and Kacie reads “Courtney, let’s spin the bottle…” Courtney responds “How’d that taste coming out of your mouth?” Really? Who says that?

The next day Ben showed up with his dog Scotch to take Courtney on her date. Props to Courtney for resisting what I assume was a natural urge she must have had to fly over everyone on a broom, shrieking “I’ll get you my pretties, and that little dog too!” I bet she was mad that she had to share attention during the date with a terrier. Ben, Courtney and Scotch drove to redwood country for a picnic, where Courtney told Ben that she’s dated an actor, a photographer, and does not get asked out much. It could be because L.A. is weird, or it could be because people find her monotone voice boring. 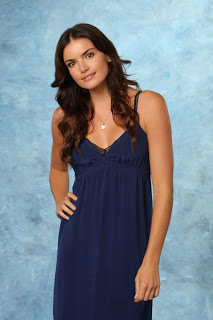 Later, they have dinner and Ben tells Courtney how after college he made a lot of money in Internet advertising and partied to forget his troubles. Then The Bachelorette helped him “cope” and “open up” and all that jazz. I’m pretty sure the entire time Ben was speaking Courtney’s inner monologue was saying “Internet advertising? Money? Wait, how much can you rake in with wine making? Maybe I should get him to go back to Internet advertising. Yeah, I’ll do that. Do I look like I’m still listening? What is he talking about now? I’ll just smile shyly, that always works. I wonder if anyone noticed that I locked that horrible, howling dog in the hot car? I’m sure it’ll be fine. Anyway yeah, Internet advertising…”

Naturally, Courtney was given a date rose.

Best of the Rest

Time for the cocktail party! The girls who didn’t get much attention on the group date and the few who didn’t see Ben at all this week were hankering for his attention. These girls have strange ways of doing it, though. First Date Rose receiver Lindzi chose to brag about what kind of pickup truck she drives and told Ben that “dirt is usually my makeup”.

Even worse was Jenna, the neurotic blogger. “I feel like I’m a guy in how I act, and so, like, being around girls all the time is very uncomfortable for me,” she told Ben. “It’s hard, like, there’s only you, and waiting around for you, and it’s totally worth it, but I’m not, like, a girl. If that makes any sense.” It didn’t, and Ben looked equal parts confused and uncomfortable. He gave Jenna a rose last week despite her nerves getting the best of her, but a girl can only be handing so many second chances.

At the center of all the drama was Blakeley, who kept butting in on everyone’s one-on-one time with Ben even though she already had a rose. It’s like they cloned Michelle Money. After hearing all the girls complain about how much they hate her, Blakeley decided to go cry in a corner next to a suitcase. I can only assume that was because Jenna had flooded the bathroom with her tears. Oh Blakeley, you can’t purposely make the women hate you and then cry when you hear them talk about that. Anyway, with the mood of the party dropping faster than the Tower of Terror at Disneyworld, it was time to move on to the rose ceremony. 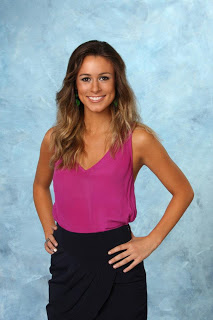 Jennifer, Emily, Elyse, Jaclyn, Erika, Rachel, Lindzi, Nicki, Casey S., Samantha, Monica, Jamie, and Brittney all joined Kacie B., Blakeley and Courtney as the lucky ones holding roses. It’s still too early to know who half these women are. Only two women were cut – Shawn and Jenna. Poor Shawn didn’t get any screen time thanks to Jenna’s overemotional exit. I guess this is what happens when you tell the guy you’re trying to date that you’re actually a dude.

Next week, Ben and the women travel a whole hour to explore San Francisco, and a mystery ex-girlfriend enters the picture and shakes things up for the women. I’ll see y’all next week, and let me know what you thought of this episode in the comments!