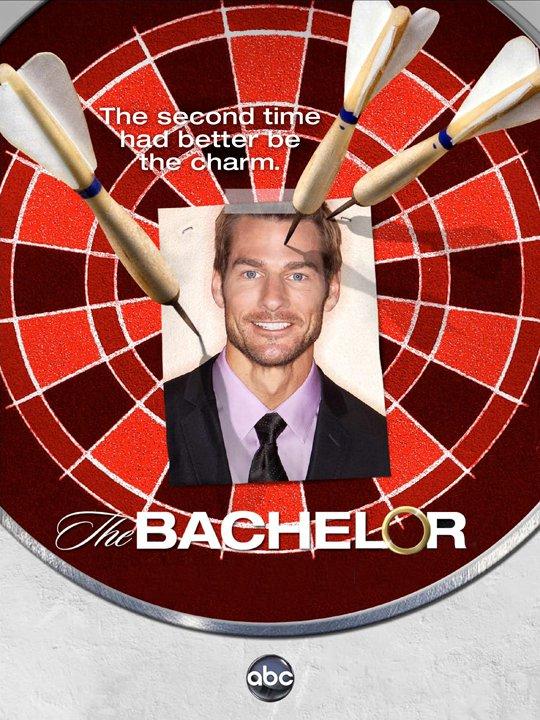 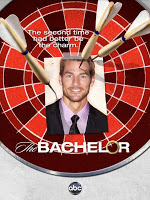 Is it just me,or are these family visits always the same? One person is rich. One person is weird. One person has a family that’s kind off starstruck, another disapproving. Same shtick, different people.

Anyway, Brad Womack visited the hometowns of his four remaining lovers on The Bachelor last night and it was…enlightening.

Her Love Don’t Cost a Thing 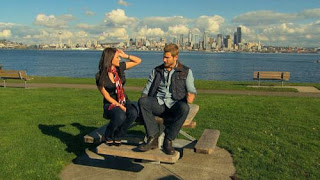 WOW, Chantal’s parent’s house was something else, right. Brad traveled to Seattle, Washington where Chantal was in one of her good moods and was dressed like a flight attendant. I actually had to look up her bio online to check and see if she was a flight attendant. She’s not.

First Chantal took Brad to her home, which is only four streets away from where her parents live. Man, going from around the corner from her folks to across the country is a big move! Chantal had a really pretty house, so this conversation immediately ensued:

Chantal introduced Brad to her dog and two cats, who all had to give him the stamp of approval. Apparently she thought her dog, who had gotten a particularly freakish haircut in honor of the occasion, would bite Brad – but they were instant BFFs.

Next Chantal took Brad to her family’s house for dinner, and at my house this conversation immediately ensued:

Me: “Oh my god, look at that house.”
Mom: “Well, now we know how she could afford a house four streets away.”

Also? Neither of us had gotten the impression from Chantal that she’s rich. And I mean that in a good way. Seriously, though, who was dying to know how her dad made all that cash? Did he invent Starbucks or something? Discover Kurt Cobain? Are they auditioning for Real Housewives of Seattle?

Brad, Chantal, her parents and her brother all enjoyed a lovely dinner at the mansion, and then Chantal’s dad led Brad out into the courtyard to look at a gaudy statue of a man cutting himself out of stone. As one might expect, it represents a self-made man. It turned out that Brad had a lot in common with Chantal’s dad. They both had people work in masonry in their families, they both had crappy relationships with their fathers, they both have bajillions of dollars…oh, not that last one? That’s too bad. Then Chantal’s dad took Brad down to the wine cellar, where he gave Brad the blessing to marry his daughter on behalf of him and his wife (who seemed to only get to speak to Brad herself for about 4.2 seconds) amid what looked like $100,000 worth of wine. Seriously, after that home visit, I was ready to propose to Chantal. 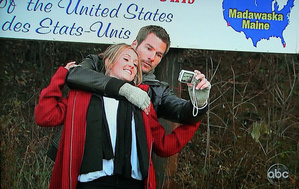 Next, Brad joined Ashley in my homeland of Canada for a visit. Wait, what? She wasn’t in Canada. Well then, she was as close to Canada as one can get in the United States. Moose? Poutine? French? Way to highlight everything I dislike about my culture, The Bachelor! (I actually have nothing against French, other than the fact that I have always sucked at it. But I do really hate poutine, and since moose remind me of the outdoors, I hate them too.)

Folks, please just keep in mind that Ashley’s miniature town is not representative of everything North of New York. I personally live in a city, where people most definitely outnumber moose.

Ashley and Brad declared over a plate of disgusting poutine (that’s not just cheese, guys, it’s cheese curds – totes different) that they would make an effort to stop second-guessing their relationship, after suffering through a rather rocky couple weeks together. Um, for reals? They had one good date and ever since have been questioning their connection or involved in some sort of drama. They are supposed to still be in the honeymoon period! If you had a rough couple weeks when you’ve only been dating for, like, six weeks, that’s a cause for concern.

Then Ashley took Brad home, where her family warned him that she had dreams an ambitions, like finishing school. Say what? I thought she was a dentist? Dentist and dental student are two completely different things. Also? Brad definitely seems to old for Ashley. As he mused about whether he’d hold her back, I predicted that she’d be getting the boot…but there were still two more dates to get through. 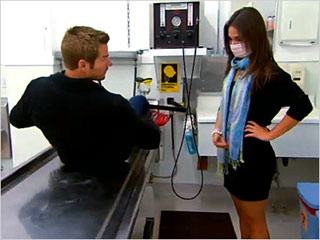 Next up, Brad visited Chico, California to spend time with Shawntel and her family. First stop? The local mausoleum, of course!

I get that Shawntel loves her career and that it’s important to her that her future husband is cool with it and all, but she focuses way more than anyone else on the details of her job than anyone else. Did Ashley describe, in nauseating detail, how to perform a root canal? Did Chantal enlighten Brad on what it’s like to be an EA? Did Emily tell Brad the most successful way to get people to donate money to sick kids? It’s not just that Shawntel has a creepy job, it’s that she is way more in love with it than your average bear. Unless  you work at Disneyland or something, no one wants to see your office.

Shawntel’s entire date with Brad was pretty much summed up as soon as he arrived, when he told her “Just what I’ve seen, I love it here.” Brad was talking about Chico. Shawntel assumed he meant the funeral home. Shawntel gave Brad a tour of the place, even going so far as to pretend to embalm him. In grotesque detail. You’ve got to give poor Brad credit for sticking it out – I would have been running for the hills.

Next Shawntel took Brad back to her family’s home, where thankfully there were no embalmed bodies sitting around Psycho-style. In fact her dad, who owned their funeral home business, joked/predicted that Shawntel’s tour would cost her a rose.

In a surprising twist, the embalming reenactment was not the most awkward part of Brad and Shawntel’s hometown date – it was seeing the look on her dad’s face as he was told that Shawntel might be moving to Austin, which would mean she wouldn’t be taking over the business that had been in their family for forty years. As much as Shawntel has the right to live her own life, it did sound as though plans for her to start taking over from her dad had long been in place. I felt bad for the guy, it was as though he was seeing retirement get flushed down the toilet. Unfortunately, I couldn’t completely root for Shawntel’s dad – the way he frequently referred to himself in the third person by saying “her father” and “your dad” was all kinds of creepy. Even though he eventually gave the couple his blessing, the situation was clear. 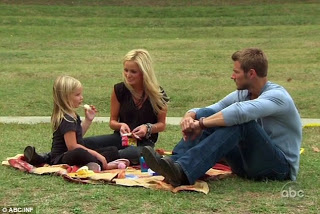 Emily should be thanking her lucky stars that Shawntel’s hometown date was such an awkward mess, because hers wasn’t much better. She’d decided to let Brad and little Ricki meet, and the pressure was palpable.

First, Emily warned her mini-me, saying “You know how when you went to school you made new friends? I made new friends, too. Isn’t that cool?” Then she explained that one friend, Brad, came all the way to Charlotte just to meet Ricki. And there Brad appears, gift-wrapped kite in hand! Ricki wasn’t having it, though. Was the gift not good enough? My mom thought so, asking “Has he heard of American Girl?”

You thought Shawntel’s dad didn’t particularly warm to Brad? Well he had nothing on little Ricki, who refused to even look the guy in the eye. Brad had no idea what to do, muttering things like “I don’t blame you” and “Kids usually do like me.” Later, when Ricki cracked her first smile, Emily delivered the overstatement of the year by declaring “So far, this day has been perfect.”

Things did improve, though, as the gang headed back to Emily’s home to make mac ‘n’ cheese and play board games. But the date ended as awkwardly as it began – Brad didn’t feel comfortable kissing Emily while her daughter was upstairs sleeping. Honestly, I thought they both had fair points. Brad was worried about Ricki coming downstairs and seeing them – after all, she hadn’t really been told that Brad might be her new daddy, had she? But Emily also had a point, reminding Brad that if things worked out Ricki would always be upstairs sleeping. Gee, it’s almost like they’re rushing this relationship by getting engaged after he’s only met her kid once…but that’s crazy talk.

Death Due Us Part

Time to hand out the roses! Brad and the ladies meet up in New York, since they’ll soon be heading to my beloved South Africa. At this point, I wasn’t sure who Brad would eliminate – I can’t see him with Ashley or Shawntel. But he called Ashley first, making it abundantly clear that Shawntel was biting the dust. Guess daddy was right – if you show your boyfriend your aneurysm hook, he’ll probably dump you.

Shawntel left with class, but a sad case of low self esteem as well, as she moaned about how no one had ever treated her as well as Brad did. You mean no one ever took you on a spending spree where you left with thousands of dollars in merchandise? Sorry sweetie, but that wasn’t Brad Womack anyway. Shawntel needs to get herself back to Chico and sign up for eHarmony – that way she can screen out the people who don’t want to hear about the embalming process in detail before the first date.

Emily has seemed like the front-runner in this competition all along, but after seeing the hometown dates I have to wonder if Brad is good enough/right for her. Can she pick up her kid and move to Austin? Brad didn’t meet her parents, so where are they? Chantal has been an emotional rollercoaster on this thing, but she seems like she’d fit best into Brad’s life. And then there’s Ashley. What is she still doing there?

What did you think of the episode? Are you looking forward to next week’s exotic locale and fantasy suite dates? Are you glad there will be no more talk of how to drain the blood from a corpse?