Home / Life / Couchtime With Jill / The Bachelor – Sweet Ones 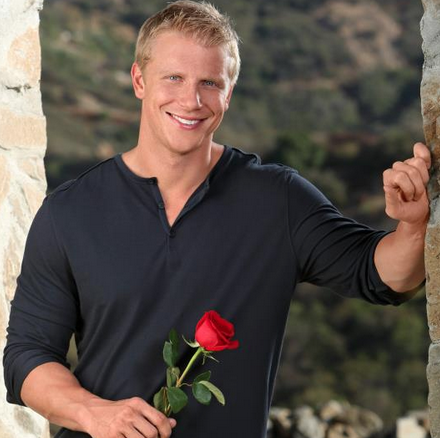 The Bachelor – Sweet Ones

Well, we’re in week two of The Bachelor and we already know who the mean girls are! But maybe Sean’s on to them, because all of the girls who received date roses this week seem to fall more on the sweet side. Good thing we have a couple of catty, self-involved women to shake up the season! Let’s get to tonight’s episode, which I thought was kind of a dud.

We have liftoff! Yes, the first date of the season also brought the first helicopter of the season. They’re not messing around here. Sean’s first date choice on this season of The Bachelor was Sarah, the beautiful blond with one arm.

The first part of the date was a free-fall from a skyscraper, which I usually hate The. Most. All the metaphors about “taking a leap” together and the fax-trust it creates drive me crazy. But it was hard to roll my eyes when Sarah told Sean over dinner about how she’d been prohibited from zip-lining once with her dad.

Sarah has a sort of monotone, Los Angeles voice bugs me a little, but she seems like a nice girl and her date with Sean appeared to go well. I wasn’t surprised at all when Sean gave her a rose.

I spoke too soon when I said that I hate fear-defying dates the most. I hate any and all modeling or acting dates way, way more. That’s not a date! It’s a job! It’s always so cringe-inducing.

This date was fun though, because it was the first peak at Tierra’s catty personal. It began with the snippy remarks about other girls’ hair extensions. Then there were the dagger eyes when one girl got to kiss Sean in her scene. This time, Sean and his lady companions were modeling for Harlequin romance novels, so, barf.

Kristy, a professional model, “won” the date and got to be on three book covers. Gee, what an upset. She was such a dark horse. I can’t believe she won.

Later, everyone had a pool party. I had a feeling that Kacie would get friend-zoned by Sean, and even though he said he wanted to get to know her and “explore”, and he gave her the rose, I don’t think she’s in the romantic zone yet.

Desiree is one of the girls who stood out to me in the first episode, so I was interested to see how she’d get along with Sean. Fitting with the theme of stupid dates, Sean was going to prank Desiree and make her think she’d knocked over an expensive piece of art. I’d forgotten Sean’s joke on Emily, when he made her think he lived with his parents. That was way funnier. This was stupid.

After the “Candid Camera” portion of the evening, Sean cooked dinner for them. Or her took cooked steak out of an oven after an intern had prepared it. Probably the latter. Quality of food doesn’t matter, because no one on this show ever eats.

Desiree and Sean seem to have similar family backgrounds, and of all the girls so far she makes the most sense for Sean. She might end up being one of those girls who I think is too good for this show. Of course, she was given a rose.

“Tonight is literally a tornado…of negativity, waiting to happen.”

That is how one of the dumb blonds described the cocktail before the rose ceremony this week. While I’d like to send a disapproving frown in her generally direction for the use of the word “literally”, the cocktail party was pretty damn awkward.

Bridal gown girl had an uncomfortable conversation with Sean where they both talked about getting old and fat. Yeah right. Like any of the shallow people on this show would stay together if one became less attractive. It would be like playing a game of fat chicken, and it wouldn’t last long.

Amanda was the worst though, taking “I’m not here to make friends” to a new level of bitch. She just sat around looking sullen when Sean wasn’t present, completely ignoring questions from others. Someone would politely ask “Amanda, how are you feeling?” and she’d just sullenly stare off into the distance like she was trying to Matilda a rose over to herself. Of course, as soon as she was with Sean, she turned on her giant smile.

The most interesting conversation of the night was between Sean and Robyn. Robyn said she noticed that Sean’s choices in women were more racially diverse than previous seasons. I’m glad Robyn brought it up, because you’d have to wonder if Sean was just trying to check off some politically correct boxes. Hearing him say that he’s had girlfriends of different races or ethnic backgrounds was heartening, particularly for this show. Robyn might be too smart for The Bachelor.

Finally, it was time to hand out the roses. There are still too many women to keep track of. Sarah, Kacie and Desiree already had roses. Ashley, Lindsay, Robyn, Jackie, Leslie M., Selma, Catherine, Kristy, Leslie H., Tierra, Taryn, Daniella and Amanda were the women to receive roses.

The mean girls are definitely Tierra and Amanda, and they’re both still in. But I’d like to see Sean go on dates with Robyn, Selma and Jackie. I’m intrigued by this medical emergency. And I can’t wait to go Google The Island Hades, that sounds really neat. ‘Til next time, pals! Head to the comments and mock away!