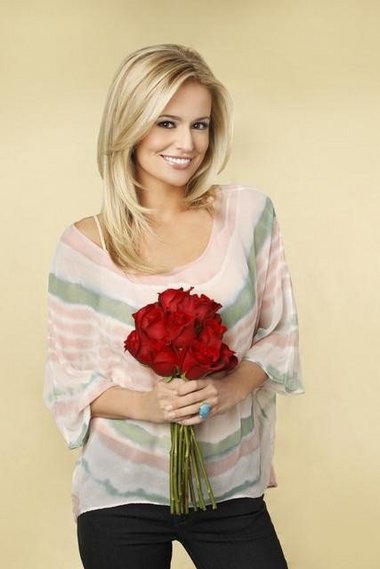 The Bachelorette – Meet Your New Daddy(s)!

Good news, guys! Aaron, a high school biology teacher from my home province of Nova Scotia, Canada, was one of the lucky guys Emily handed a rose to on last night’s premiere of The Bachelorette. Yes, little old Nova Scotia is being represented on the show – although Aaron does live and work in L.A. now.

I was surprised at Aaron’s lack of accent, since he’s from North Sydney, which is in Cape Breton where even I can’t always understand what people say. A Cape Bretoner I am not. (I used to date someone from Cape Breton. Going to visit his family meant going to a place where there was no Starbucks. No Starbucks, guys! There are still places like that!)

Emily and her gentleman callers.

I always find these premieres kind of boring, because it’s just a parade of guys who look vaguely alike doing stupid things to stand out. So let’s talk about the gimmicks that were used tonight, shall we? Some of the lamest included:

Um, really? Who arrives in a helicopter to meet a girl who lost her fiancee in a fiery plane crash? Also, it’s just douchey. And not very special – we all know there’s no lack of helicopters in the Bachelor(ette) univers. All the other guys immediately ganged up on him, because who wouldn’t?

The show spent a lot of time setting up how much Emily loves Ricki and is doing this for her, so that mean bloggers wouldn’t write things like “But there is a child involved!” when things inevitably go South. Poor Emily puts her little pal to bed at 7:30 and then is all alone for the rest of the night, so obvs she needs to meet a guy.

I liked Emily when she did The Bachelor because she seemed as sweet, classy and genuine as possible for someone on a reality TV show. In fact, she seemed naive enough to actually believe she was there to meet a guy, and not to soak up 15 minutes in the spotlight. So I’m kind of apprehensive of her doing the show again, because she seems too good for it.

Also, can we talk about what some of these people do for a “living”? Here’s my favorites:

The guy who stood out the most to me was Doug, the single dad. Obviously he stood out a lot to Emily as well, because she gave him the First Impression Rose. I mean, he brought a letter for her from his 11 year-old son – can you beat that? No! Of course, I’m not sure what they’d do about the fact that he lives in Seattle. But this is The Bachelorette! Reason and logic can’t stand in the way of love! At least not during filming, anyway. About six months down the line, it begins to get real important.

That meant the men taking a moment to say their goodbyes included one of the few minorities included, an over-40 guy with SIX KIDS, the fitness model and Mrs. Doubtfire.

The previews for the rest of the season suggested that Emily and the guys won’t be staying in Charlotte long, but Little Ricki will be joining them on the road. And when one dude refers to Emily’s daughter as “baggage”, she confronts him and tells him to “get the f— out”. Don’t poke mama bear, y’all!

OK, what’d you guys think? Are you ready to get your mock on for the season? And a friendly reminder not to post spoilers in the comments section, please! They’re usually all over the Internet, so people who want to know what happens will find out for themselves.