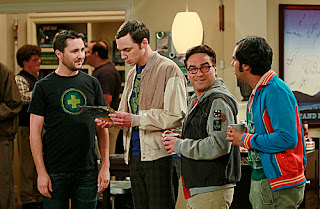 I love when The Big Bang Theory goes full-on nerd, and last night’s episode definitely did that. I mean, it opened with Leonard and Sheldon at the comic book shop contemplating if they should buy a Game of Thrones sword. (Answer: Of course!) And, enter Wil Wheaton, one of Sheldon’s 61 mortal enemies. He invited Stuart the store owner, Leonard and Sheldon to a party at his place. When Leonard revealed that he was actually considering attending, Sheldon was furious.

I love whenever Sheldon gets to deal with his nemesis. On the one hand, his anger is completely over-the-top, in a Sheldon Cooper kind of way. On the other hand, hasn’t Wil Wheaton always kind of been a jerk? (Sidenote: I recently re-watched Stand By Me and thought to myself “Hey, I didn’t know Wil Wheaton was the kid in this”, so Sheldon’s jab about that really made me laugh.)

While Leonard was trying to decide if he’d go or not, Sheldon was caught in a dual world where was either friends with Leonard or hated his guts. (Sheldon would love Abed from Community.) When Leonard told Sheldon that Brent Spiner (I had to Google him) would be there, Sheldon finally gave in and showed up at the party. And in a hilarious twist, he ended up making amends with Wil and adding Brent Spiner to his mortal enemies list (mentally, anyway, the floppy disc he had it stored on since the age of nine had crashed).

I’m glad the feud between Sheldon and Wil is over, because it was so funny to witness how easily Sheldon could get over his grudge. All it took was one genuinely nice gesture from Wil – he autographed a mint condition action figure of Wesley Crusher with “sorry this took so long”. Brent ended up on the list when he stupidly opened the package.

Meanwhile, Howard showed how much he’s matured when he got into a grownup argument with Bernadette. He was offered a chance to go into space and jumped at the opportunity before discussing it with Bernadette. When she pointed out that they should be making these big kinds of decisions together, he talked it over with her – but she said no. Later it seemed like Bernadette had come around on the subject – it is, after all, his dream – but instead she just went the sneaky saboteur route and told his mother on him. Howard was mad, and rightly so. Eventually Penny and Amy talked some sense into Bernadette, and she apologized to her fiancee. I for one hope Howard gets to go into space – it seems only fair, since he’s the only one without a PhD.

Overall, I thought “The Russian Rocket Reaction” was a great episode. I love that The Big Bang Theory has evolved into a nerdier version of Friends. Now, check out my favorite quotes and moments from the episode: