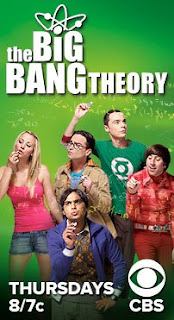 Oh Wollowitz. So weird. So gross. So funny. I’ve never liked Howard Wollowitz, but I can’t help but laugh at his antics. Everything he says and does is just so wrong!
Last season Wollowitz actually got a girl – a real one, not a creepy blow-up one – to go out with him. Their relationship was hilarious, and I was devastated (OK, more like slightly peeved) when they wrote her out of the show without even an explanation of the break-up. Well, this episode addressed that.
Howard seemed unruffled by his split with Bernadette until he actually saw his ex-flame at the Cheesecake Factory and dove under a table to avoid her. Apparently – this comes as no surprise – their break-up had been rather embarrassing. As Sheldon pointed out, he went the “pathetic and frightened” route. After Bernadette infiltrated his private fantasies when he was at home, relaxing in his satin shorty pajamas, he realized he really wasn’t over her. (His fantasy was supposed to be about Katee Sackhoff, but George Takai crashed the party as well.) So, he went to Penny for help.
I had to laugh when I found out that Howard recorded Sheldon’s voice saying “Penny” just so he could mimic the “Knock knock knock Penny. Knock knock knock Penny. Knock knock knock Penny” to trick her into opening the door. Penny agreed to help Howard win his lady back and set up a coffee date for them – but he had to tell her the reason they’d broken up in the first place. 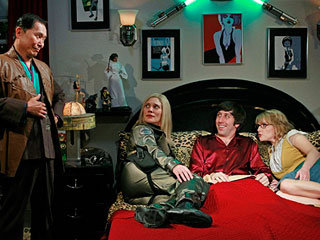 The reason was so humiliating and so totally Howard – Bernadette caught him “clicking” a troll in World of Warcraft. Bernadette understood that Wollowitz had “needs” that weren’t being met, but said it was because he’d never made a move. She also delivered the funniest line of the night, telling him “A girl doesn’t go out with a man like you with your looks, your fancy patter, and your tight hoochie pants if she’s not expecting him to eventually make the move!” So she agreed to give him another shot. He almost ruined it, making a move too soon this time, with some hilarious devil-angel report from Katee Sackhoff and George Takei.
The subplot this week, a feud between Raj and Sheldon, was also hilarious. This is a much better use of Raj than making lame jokes about his ethnicity. I loved that Raj outsmarted Sheldon and how quickly the feud degenerated into utter chaos.
This episode was a great example of how the show can be great without focusing entirely on Sheldon. Here are some more hilarious moments and quotes from “The Hot Troll Deviation”: