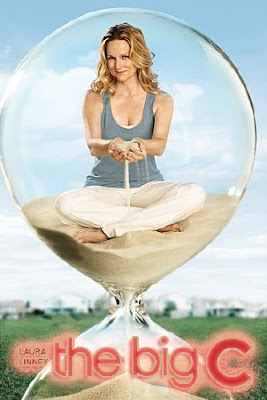 Wow, what an episode. As I’ve said before, I kind of lost interest in The Big C midway through the season, but am I ever glad I kept it up. The past several episodes were fantastic, last week’s shocking, sad ending was beautifully written and still the season finale managed to top it.
The episode began with Marlene’s kooky, perfectly planned funeral. Oh Marlene. How I’ll miss her. It turned out that she’d left the house to Cathy because her two daughters were kind of horrible. They didn’t give a crap about her stuff, gave away her dog and planned to tear down the house. But it was Cathy’s house. Ha.
Cathy decided to give the house to Shaun because – get this – he’s going to be a dad. Yep, he and Cathy’s friend Rebecca are going to be parents. Shaun is an odd character, but he’s grown on me throughout the season. I look forward to what this new development (actually living in a home…or sleeping in the yard of his home, anyway) will bring for him.
The big, big news, though, was that Cathy decided to try and fight the cancer. I wondered if this would happen. I thought there was something beautiful about how Cathy wanted to go out enjoying herself, but you can’t argue with a woman for wanting to live. The medicine she’s trying is very painful though, so it meant she and Paul had to break the news to Adam. Adam took the news well, just like he took the news of Marlene’s death (and the fact that she pulled a gun on him) well. So well that Cathy was a little concerned. 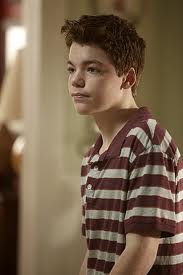 Then Adam found the key to the storage locker. Which he went to, even though it was supposed to be for when Cathy’s gone. If we’ve learned anything about Adam this season, it’s that he’s only human. The following scene was absolutely heartbreaking. Just thinking about it now makes me want to cry. Adam opened the storage locker to find the sports car (for his 18th 30th birthday) along with dozens of other presents. Gifts for future birthdays, graduations and Christmases that Cathy would not be able to celebrate. Adam finally broke down.
Adam has been a difficult character to sympathize with because he can be such a brat. But he’s a teenager. His mom has been acting kind of crazy all summer. His parents had split up. The kid has been through a lot. He reacted with only a casual sort of concern to the news of his mother’s cancer because that’s how teenage boys are, but seeing the proof that his mom won’t be around for anything really shoved the message in his face. The scene was devastating, poignant, and unbelievably well written and acted. The sight of the gifts said it all, and that’s what I love about this show – some of the most memorable scenes have contained very few words.
The scene of Marlene dancing while Cathy enjoyed an in-ground pool in her dreams was a beautiful way to end the season. I’m going to assume it didn’t mean Cathy was dead, because there is a season two in the distant future. Until then, I recommend you check out this simultaneously funny and tragic show.