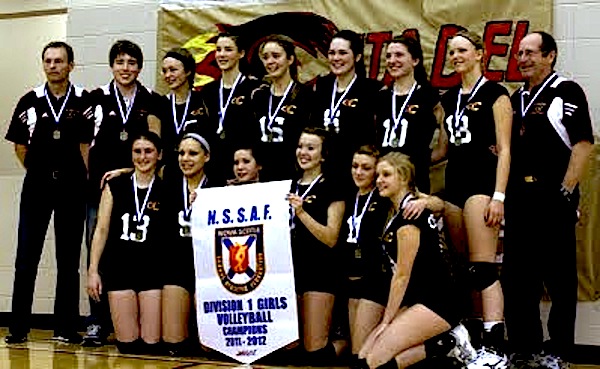 By scoring a two matches to one victory (25-18, 13-25 and 15-6, the team avenged a previous loss to the Cougars in the round robin round of the playoffs to bring home the school's first provincial crown.

In the 2010 NSSAF provincial playoffs, the Phoenix made it all the way to the finals, but were denied the crown.  They were defeated by the Riverview Royals two matches to one.

Additionally, this is the first girls provincial volleyball title that a Metro team has won in 18 years.  The last team to win the title was the Dartmouth High Spartans.  The Spartans won two straight titles in 1992 and 1993.

Senior players Anna-Claire Lamport and Abby Czenze led the Phoenix in the championship game.  Lamport had nine kills and 5 blocks in the game while Czenze registered 21 assists and 3 blocks.  Both players along with Christine Gaudet have been selected as all-stars and will play in the NSSAF all-star game on December 6th at Sackville High School.

This caps off a sensational season campaign for the Phoenix.  During the NSSAF regular season, the Phoenix went undefeated with a 10-0 record which saw the team win 30 sets and lose only 4 sets.

The head coach for the winning championship team is Ken Boutilier.  Assistant coaches are Paul Wesson and Cory Richard
In the bronze medal match, the Judges defeated the Griffins two sets to one (25-15, 25-12).

The Citadel Phoenix Girls Volleyball team are queens of the court.
https://haligonia.ca/the-citadel-phoenix-girls-volleyball-team-are-queens-of-the-court-50085/