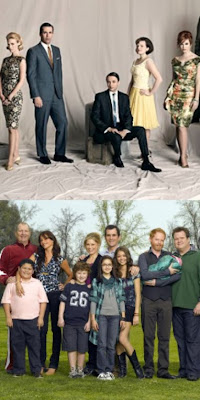 The Emmys were on last night, and congratulations to Krista for winning the Couchtime Emmy Contest! She correctly predicted 13 of the 20 categories on the ballot, which is quite impressive! I only correctly predicted a mere ten categories, which made me feel pretty pathetic. If I learned anything from the awards show, I learned that I really need to start watching Modern Family, Breaking Bad and Friday Night Lights. I know, FNL didn’t win anything, but don’t think I didn’t notice all the applause the nominations got. Thanks to everyone who entered the contest, and hopefully I’ll do another one soon.
Make sure you check out the blog later today for a full fashion recap of the Emmys, and for now let’s talk about the show and who took home the big awards.

Mad Men took home the prize for outstanding drama, and Modern Family won for comedy. I was happy to see Mad Men win, although I was also rooting for Dexter. I was surprised that Mad Men didn’t receive any acting awards this year, but the show did win for writing as well. Modern Family scored more wins in supporting actor for a comedy and in writing.

Bryan Cranston won (again) for Breaking Bad, and Aaron Paul scored a win for the series in supporting actor as well. I’ve heard this show is good, and with so many Emmy wins I feel like I should be watching it. Kyra Sedgwick won outstanding lead actress for The Closer, and Archie Punjabi won in supporting for The Good Wife. I was hoping a couple of the ladies from Mad Men would take home trophies, but I am a fan of Kyra Sedgwick. She just seems nice.

One of the happiest moments of the evening for me came when Jim Parsons won for lead actor in a comedy. He’s so deserving, and I was really hoping this would be his year. The Big Bang Theory is a very funny show despite its laugh-track, but what makes the show so good is Jim’s performance as Sheldon Cooper. He’s so perfect as the character, so quirky yet believable. While The Big Bang Theory isn’t nearly as good a show as Seinfeld, I often compare Jim’s performance as Sheldon to Michael Richards’ portrayal of Kramer. Only Jim Parsons seems like a much nicer guy in real life. I root for Jim Parsons every year, and it was lovely to see him receive a much deserved Emmy win.

The other comedy awards went to Edie Falco for Nurse Jackie and Jane Lynch for Glee. I can’t pass judgment on the result for lead actress because of the nominated shows I only regularly watch Glee. I was thrilled to see Jane Lynch win, though.

In other categories, Temple Grandin was a big winner, and Al Pacino took home a trophy for his role in You Don’t Know Jack. I was shocked that Top Chef won for reality – competition program. That award has always gone to The Amazing Race in the past – though if you ask me, it should have been Survivor’s year to win. 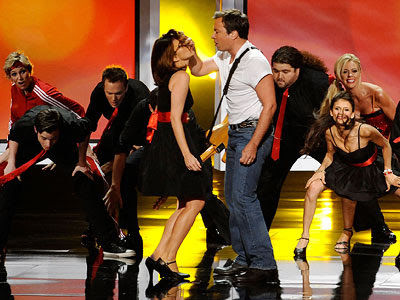 OK, now let’s talk about Jimmy Fallon. Awards show hosts can sometimes be polarizing, and perhaps not everyone will agree with this – but I thought he was hilarious. Seriously, the guy should be nominated for an Emmy for that hosting job. The opening number had me cracking up (even though it was basically a 7-minute commercial for Glee). John Hamm and Betty White dancing together? Classic! Tina Fey and Jimmy Fallon getting slushies thrown in their faces? Brilliant! The dance routine when they came out on stage was also hilarious – the bit with Tina Fey’s glasses had me cracking up and the fact that Kate Gosselin actually managed to poke fun at herself was both shocking and delightful. Or at least tolerable.

I also loved his singing intros to categories like “Comedy”, “Reality”, “Drama” and “Movies/Miniseries”. Singing to Tom Hanks that he’s going to run out of wars and fake bitch-slapping Julianna Margulies were highlights. Then there was his musical tribute to shows that ended this year. The Elton John impression for 24 was spot on, as was the Greenday impression for Lost. I didn’t get the impression he did for Law and Order (some lovely Tweeps told me he was doing Boyz II Men…how…relevant…), but overall he still had me cracking up. The joke about Jack Bauer never taking a bathroom break was great, and the way he sang “I

As for presenters, Ricky “me again” Gervais obviously stood out. The guy always rocks his award presentations, it’s such a shame that he was so blah when he hosted the Golden Globes. The banter between Jimmy Fallon and Neil Patrick Harris also stood out. And then of course, there is John Hodgman’s hilarious commentary. He should have that gig at every awards ceremony.

The show started to drag during the presentation of the awards in the movie/miniseries categories. I wish they’d hand out more of those awards during the creative arts Emmys. I’d much rather have seen NPH and Betty White accept their awards for guest spots than see long-winded speeches from the guys who directed The Pacific. And how many times did we need to see the real Temple Grandin get up and wave? Despite that lagging, though, I’d say the broadcast was a success. It was a strong year for TV with some fantastic nominees, and Fallon killed it as host. What did you think of the Emmys? Did you like Fallon’s hosting job? Did anyone get robbed?

The Emmys: Someone give Jimmy Fallon an Emmy!
https://haligonia.ca/the-emmys-someone-give-jimmy-fallon-an-emmy-24505/