The Folio Prize aims to recognise and celebrate the best English-language fiction from around the world, published in the UK during a given year, regardless of form, genre or the author’s country of origin.

It is the first major English-language book prize open to writers from all over the world.

The Guardian reported “Organisers are at pains to say it is not anti-Booker nor a Booker rival. But it may not have existed had it not been for the controversy over the 2011 Booker shortlist in which judges emphasised “readability” and a book’s ability to “zip along”.

The eight books in contention for this year’s prize are:

“In a letter to his estranged wife, Erik Schroder pleads for mercy and understanding, as he attempts to explain the recent, unsanctioned trip he has taken with his young daughter, Meadow. Woven throughout the novel is Erik’s personal history. Originally from East Germany, during his teenage years Erik becomes convinced that he does not fit in with his peer group and creates a new, Americanized identity, calling himself Eric Kennedy. This ruse lasts for many years, through college, a marriage, a semi-successful career, and fatherhood. However, in the midst of a heated custody battle, Erik slowly becomes unhinged and makes a grave mistake that results in the unraveling of his elaborate secret. Gaige creates a fascinating and complex character in Erik, as he moves from the eccentric and slightly irresponsible father to a desperate man at the end of his rope. While the novel’s format occasionally lends itself to overly dramatic prose, this does not take away from its warmth and expert exploration of the immigrant experience, alienation, and the unbreakable bond between parent and child.” – Booklist

“Old Filth and The Man in the Wooden Hat told with bristling tenderness and black humour the stories of that Titan of the Hong Kong law courts, Old Filth QC, and his clever, misunderstood wife Betty. Last Friends, the final volume of this trilogy, picks up with Terence Veneering, Filth’s great rival in work and – though it was never spoken of – in love. Veneering’s were not the usual beginnings of an establishment silk: the son of a Russian acrobat marooned in northeast England and a devoted local girl, he escapes the war to emerge in the Far East as a man of panache, success and fame. But, always, at the stuffy English Bar he is treated with suspicion: where did this blond, louche, brilliant Slav come from? Veneering, Filth and their friends tell a tale of love, friendship, grace, the bittersweet experiences of a now-forgotten Empire and the disappointments and consolations of age.” – publisher

“*Starred Review* From the terroir and populace of his native American West, the author of Plainsong (1999) and Eventide (2004) again draws a story elegant in its simple telling and remarkable in its authentic capture of universal human emotions. The last, dying days of old Dad Lewis supply the framework for this sober yet reverberant novel. Dad owns a store in a small Colorado town, and his terminal illness draws out the compassion of his adult daughter, whom Dad wants to take over his business upon his imminent passing, and sparks an arousal in his long-devoted wife to seek some degree of resolution to an unhealed family wound. Dad’s closing days also stir emotions in other town residents who are in Dad’s realm of acquaintances, including the girl who moved in next door to stay with her grandmother and whose memories of her deceased mother remain raw; the new minister in town who suddenly rebels against the reluctance of his congregation to think about new ideas; and a mother and daughter, the former advanced in years and the latter now in middle age, who still confront traits in each other that they would just as soon not see.” – Booklist

The Flamethrowers (M)
by Rachel Kushner

“The year is 1975 and Reno–so-called because of the place of her birth–has come to New York intent on turning her fascination with motorcycles and speed into art. Her arrival coincides with an explosion of activity in the art world–artists have colonized a deserted and industrial SoHo, are staging actions in the East Village, and are blurring the line between life and art. Reno meets a group of dreamers and raconteurs who submit her to a sentimental education of sorts. Ardent, vulnerable, and bold, she begins an affair with an artist named Sandro Valera, the semi-estranged scion of an Italian tire and motorcycle empire. When they visit Sandro’s family home in Italy, Reno falls in with members of the radical movement that overtook Italy in the seventies. Betrayal sends her reeling into a clandestine undertow.” – publisher

“One of the most important and blazingly original writers of his generation, George Saunders is an undisputed master of the short story, and Tenth of December is his most honest, accessible, and moving collection yet.

In the taut opener, “Victory Lap,” a boy witnesses the attempted abduction of the girl next door and is faced with a harrowing choice: Does he ignore what he sees, or override years of smothering advice from his parents and act? In “Home,” a combat-damaged soldier moves back in with his mother and struggles to reconcile the world he left with the one to which he has returned. And in the title story, a stunning meditation on imagination, memory, and loss, a middle-aged cancer patient walks into the woods to commit suicide, only to encounter a troubled young boy who, over the course of a fateful morning, gives the dying man a final chance to recall who he really is. A hapless, deluded owner of an antiques store; two mothers struggling to do the right thing; a teenage girl whose idealism is challenged by a brutal brush with reality; a man tormented by a series of pharmaceutical experiments that force him to lust, to love, to kill—the unforgettable characters that populate the pages of Tenth of December are vividly and lovingly infused with Saunders’s signature blend of exuberant prose, deep humanity, and stylistic innovation.” – publsiher 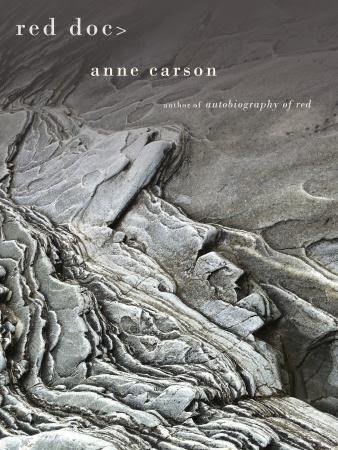 “In a stunningly original mix of poetry, drama, and narrative, Anne Carson brings the red-winged Geryon from Autobiography of Red, now called “G,” into manhood, and through the complex labyrinths of the modern age. We join him as he travels with his friend and lover “Sad” (short for Sad But Great), a haunted war veteran; and with Ida, an artist, across a geography that ranges from plains of glacial ice to idyllic green pastures; from a psychiatric clinic to the somber housewhere G’s mother must face her death. Haunted by Proust, juxtaposing the hunger for flight with the longing for family and home, this deeply powerful verse picaresque invites readers on an extraordinary journey of intellect, imagination, and soul.” – publisher

“A Naked Singularity tells the story of Casi, a child of Colombian immigrants who lives in Brooklyn and works in Manhattan as a public defender–one who, tellingly has never lost a trial. Never. In the book, we watch what happens when his sense of justice and even his sense of self begin to crack–and how his world then slowly devolves. It’s a huge, ambitious novel clearly in the vein of DeLillo, Foster Wallace, Pynchon, and even Melville, and it’s told in a distinct, frequently hilarious voice, with a striking human empathy at its center. Its panoramic reach takes readers through crime and courts, immigrant families and urban blight, media savagery and media satire, scatology and boxing, and even a breathless heist worthy of any crime novel. If Infinite Jest stuck a pin in the map of mid-90s culture and drew our trajectory from there, A Naked Singularity does the same for the feeling of surfeit, brokenness, and exhaustion that permeates our civic and cultural life today. In the opening sentence of William Gaddis’s A Frolic of His Own, a character sneers, “Justice? You get justice in the next world. In this world, you get the law.” A Naked Singularity reveals the extent of that gap, and lands firmly on the side of those who are forever getting the law.” – publisher

A Girl Is A Half-Formed Thing  (M)
by Eimear McBride


“Eimear McBride’s novel tells the story of a young woman’s relationship with her brother who is living with the after effects of a brain tunour. Not so much a stream of consciousness, as an unconscious railing against a life that makes little sense, and a shocking and intimate insight into the thoughts, feelings and sensual urges of a vulnerable and isolated protagonist, to read A Girl is a Half-Formed Thing is to plunge inside its narrator’s head, experiencing her world first-hand. This isn’t always comfortable – but it is always a revelation.” -publisher