The Golden Globes were on last night. Did you catch them? I was almost tempted to not watch, because these awards shows can be so boring. And let’s be honest, I’m really only in it for the red carpet.

So let’s start with that! These were my favorites of the night: 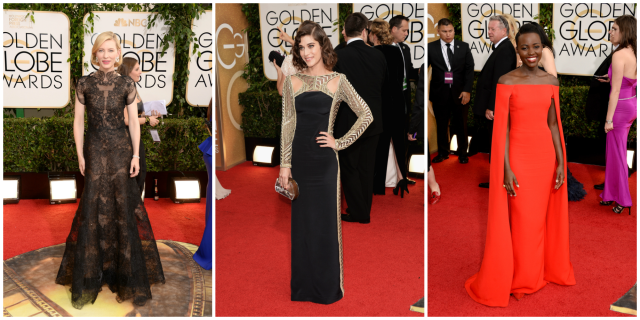 These women all look classy and statuesque. Their gowns feel very Old Hollywood, yet modern at the same time.

I also really liked these ones: 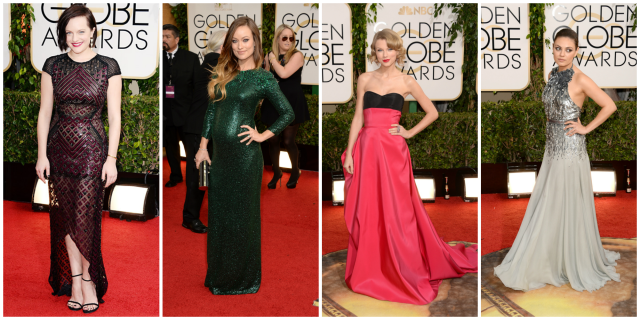 There were many pregnant celebrities walking the red carpet this year. Many people raved about Kerry Washington’s dress, but that wasn’t really my thing. I thought Olivia Wilde looked fantastic though.

I don’t love dresses that are shorter in the front than the back like Elisabeth Moss’s, but in general I think this is the most gorgeous she’s ever looked.

But of course, I also have to mention my Worsts. There were many. So many! But here’s a handful of some of the worst of the night: 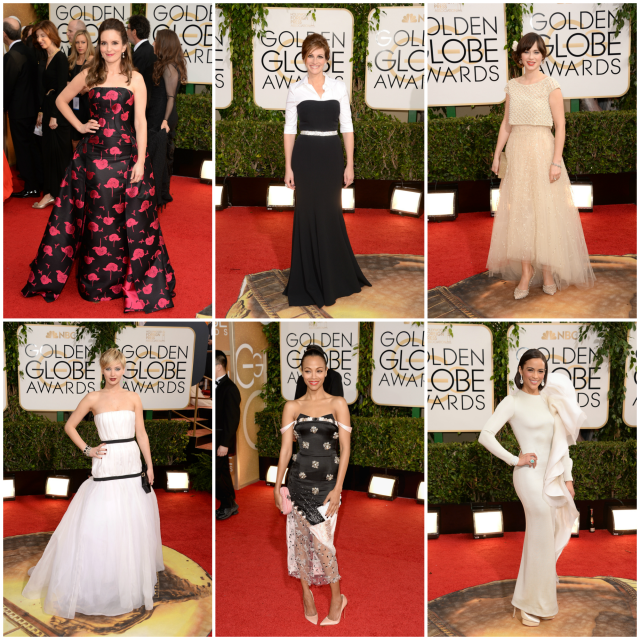 I tried to find a good photo of Tina Fey and Amy Poehler in the dresses they wore during the opening of the show, but came up empty. I liked Tina’s dress then MUCH better than what she wore on the red carpet. The print, the weird skirt… no good.

Julia Roberts wore a collared shirt under a bustier like it was 1998. Jennifer Lawrence, Zoe Saldana and Paula Patton ALL looked like they crafted their gowns as part of a Project Runway challenge with limited supplies (toilet paper! electrical tape!) fifteen minutes before the show.

Normally I love Zooey Deschanel’s red carpet style, but this time it wasn’t for me. That weird little top particularly didn’t work with the shape of her skirt.

As for the show, Tina and Amy did a great job hosting for the second year in a row. In fact, some of their jokes actually made me laugh out loud.

Perhaps the funniest moment of the night, though, was thanks to Emma Thompson – she came out barefoot, holding a cocktail, and tossed her shoes aside when she needed a free hand. Man, that woman is a genuine delight.

The winners and stuff… as always, they were surprising. Why didn’t 12 Years a Slave get more recognition? Robin Wright instead of Taylor Schilling or, most deservedly, Tatiana Maslany? BALONEY. Jon Voight instead of Aaron Paul? Andy Samburg…?

I’m publishing this post before the show is even over, and I’ll catch up on the recording tomorrow. These things are always so long! If anything cool happens in the last hour we’ll all see it on Buzzfeed tomorrow anyway.