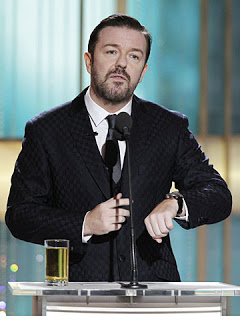 I won’t provide you with a full list of last night’s Golden Globes winners because you can see one here and because this year I decided that the Golden Globe Awards just don’t mean as much as they used to. Yes, they’re one of my favorite televised awards shows – you get to see all your favorite starts from film and television, and everyone gets drunk. What’s not to love? Oh right. The nominees. Some of the nominations this year were so off the mark (Hello there, Burlesque!) that it was hard to take the broadcast seriously.

Luckily, the fashions and the jokes were enough to keep me interested. I’ll have a full fashion review up later today, so for now let’s just talk awards. Ricky Gervais was, in my opinion, brilliantly funny. He took no prisoners last night and had me in hysterics every time he came on stage. Gervais made his jokes for the folks at home and the few people in the audience who actually have a sense of humor about themselves, and that made me love him.

For the most part, it seemed like people weren’t sure if they were allowed to laugh or not. Come on, people! Loosen up! Does anyone really care if Charlie Sheen is mad at you? He wasn’t even there! Luckily, the Golden Globes have not yet stooped so low as to nominate Two and a Half Men for something. I saw Alec Baldwin covering up a few snickers. Come on, man! Let it out! Gervais’ cracks about Sex and the City 2 and The Tourist were brilliantly cruel, and his later interaction with Steve Carell was great. 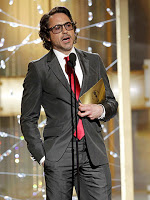 Robert Downey Jr. took a hit and also dished some back, but in a way that made me feel like it was all in good fun. Bruce Willis? Not so much. After being introduced by Gervais as “Ashton Kutcher’s dad!” he botched his comeback and looked as though he might pop Gervais in the face at the after party. For what it’s worth, though, I’m giving Ricky Gervais an A+ for his hosting abilities. He should really just do it every year.

The big winners last night were Glee and The Social Network. Let’s talk television first, since that’s what my blog is actually about. 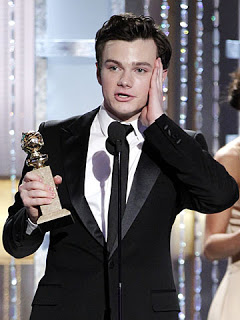 I could not be happier that Chris Colfer won. I jumped up and down on the couch clapping my hands in glee. (Ha!) Colfer’s speech was beautiful, and the look on his face when he won was even better. It was such a well-deserved award.

However, I sort of thought it would be the only one Glee got last night. I was rooting for Sofia Vergara in Supporting Actress and Modern Family for best comedy, but those awards went to Jane Lynch and Glee. I’m not angry – I love Glee and am happy it won, despite complaints echoed ’round the Twitterverse that the writing is not up to snuff for such an award. I hear ya, but I still think it’s a good show. And before I move on, I’m going to take a minute to defend the often unlikable Lea Michele. Yes, she can be incredibly annoying and over-dramatic. But give the girl a break! It is very possible that she was truly crying tears of joy when her costars won, not tears of jealousy or “Put the camera on me!” tears. It sounded like she maybe got booed last night! That’s just mean. She’s not my favorite either, but I don’t think she deserves all the hate she gets. OK, end of rant.

The other big winner in television was Boardwalk Empire. Here, I am not so on board. (Ha!) Steve Buscemi is fantastic and makes that show (I wouldn’t have made it past the first episode if it weren’t for him) but John Hamm delivered an astounding performance this year on Mad Men. Then when Boardwalk beat out Mad Men for Best Drama I got really angry. I’m sorry, but there is no way that Boardwalk Empire was even on the same level of excellence as the fourth season of Mad Men. I also thought Elisabeth Moss should have won for acting. This was Peggy Olsen’s season. No one could have been better.

I was happy to see Jim Parsons win because he’s great on The Big Bang Theory and is just so damn charming, and I was also happy for Laura Linney. I ran hot and cold with The Big C this year, but she put in a fantastic, layered performance.

As for movies, I strongly believe that The King’s Speech was the best movie this year. I thoroughly enjoyed The Social Network, but I just do not believe it was a better film. Yet it won for Best Drama, Directing, Screenplay and Score. What will this mean for the Oscars? I’m hoping it means nothing. 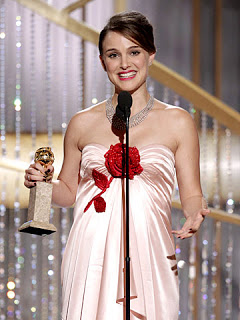 I was, of course, thrilled that Colin Firth won. I think he’s an outstanding actor and was brilliant in the film. I would have been completely disgusted had he not won. I’m glad The Kids Are Alright won for Best Comedy because even though I haven’t seen it, I could tell the alternatives were not on the same level. There were a few wins for The Fighter (including Christan Bale, who ironically looked like Jesus and swore like…Christian Bale), which I’ll hopefully see this week, and Paul Giamatti won for Barney’s Version. I’ve been on the fence about seeing this one – have any of you seen it? Should I go? And I was glad that Natalie Portman won for Black Swan. I saw the movie this weekend and thought it was gripping and beautiful, though a tad predictable. But she was brilliant and certainly deserves all the Best Actress awards this year.

The best part of the Golden Globes is getting to see everyone interact at their tables, but the cameraman really should have spread the love some more. As I mentioned before, Lea Michele got a lot of screen time. That didn’t need to happen. Similarly, the camera crew really liked to routinely show Angelina Jolie. Can we please leave her alone? It seems like they just leave a camera permanently on her waiting for her to make a weird face so everyone can go “Oh, what a bitch!”. Just let her enjoy herself while she rests her head on her gorgeous husband’s shoulder!

Robert De Niro won a lifetime achievement award, but his acceptance speech seemed to be more like a stand up comedy routine. It was awkward, lengthy and just didn’t work for me. 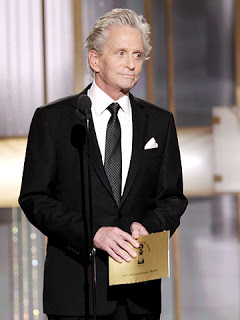 Possibly the best moment of the whole night was seeing a happy, healthy looking Michael Douglas walk out on stage. I, like everyone else, was really rooting for the guy and am so happy to see him doing well. And he did a great job of lightening the mood by saying “There has to be an easier way to get a standing ovation.”

Despite some questionable nominations and a few questionable wins, I enjoyed the show. And I had a lot of fun live tweeting it. Check out what I had to say, along with the girls from Fashionable People, Questionable Things and their intern Krista. Did you watch the award show? Did your favorites win or get snubbed? Did you think Ricky Gervais went to far or hit the nail on the head? And check back later for the best and worst of the red carpet fashions!