This post is all about food 🙂 A few days ago, my sis and cousin took us out for a hot pot experience. Hot pots aren’t new to me, as we grow up eating so many of them, but this special place served them a little differently, so I was eager to try. 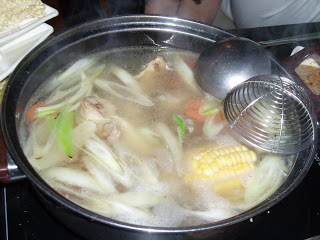 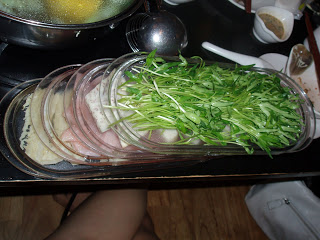 We basically ordered a base broth from a selection of 6-7 different kinds, ranging from regular, mild to hot. We choose the mild version, as Squirt couldn’t eat spicy food yet. It came with green onion (green and white parts), corn, carrots, some herbs and some pig bones to sweeten the taste. We then picked out the ingredients that would go into the broth from a long list of vegetables, meats, noodles, etc. which came in some little plastic trays or bowls. 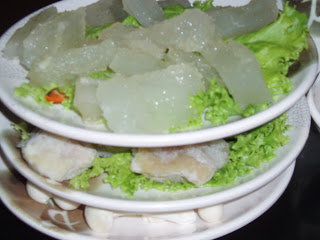 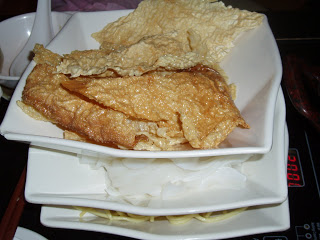 For those of you who aren’t familiar with hot pots, we throw the ingredients into the broth to cook a bunch of things at a time, then throw in another bunch when we finish eating the first bunch. When we get to the end, the broth becomes very tasty, thanks to all the good stuff that goes into it. That is when we add the noodles and eat it with the broth. Nothing is wasted 🙂 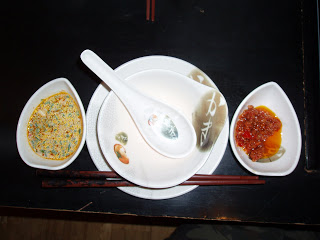 Can’t forget the sauce as it plays a very important role in adding extra flavors to the items after being cooked in the broth.

The mixed sauce on the left had garlic, chilli, chopped herbs, etc. I can’t even tell how many ingredients were in it, but it was very flavourful. We just transfered the items from the broth to the sauce, then in the mouth they went, lol.

On the right was some extra chilli sauce to add some extra kicks to the sauce, as the broth was only mild.

I had a really good time. It has been such a long time since I had one that good. When I was still in school, I had a group of friends that got together for hot pots quite often. Lots of them has moved away after graduation, and it sucks. 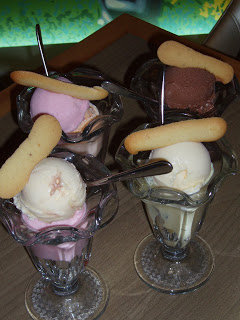 Across the street from the restaurant was an ice cream shop, so we went there for some sweetness. Omg, I was like in a dessert heaven, as there were about 20 ice cream flavours to choose from, most of them were tropical – mango, lychee, taro, guava, jack fruit, etc. I was drooling at the counter before I could make a decision on what to order.

So 4 of us, 4 cups, 8 scoops, gone in a jiffy. It was so good that I wanted to try all other flavours they offered. I definitely will come back to this place at least once more before I leave, so I could satisfy my thirst for tropical taste.

I had limitted my ice cream consumption in Halifax, due to its high fat level. But to this goodness, I couldn’t resist. There were frozen yogurt places around here that I haven’t had a chance to try either. Why oh why do I have too many things I haven’t tried when it’s almost time to leave?