[It’s no secret that my fave restaurant in the city is Brooklyn Warehouse (follow them on Twitter @BrooklynHalifax). I’ve even said, “I’d divorce brownie husband and leave our chocolate chip kids behind if I could marry the menu.” The obvious reason for my infatuation with the food is the chef. The not so obvious reason is the ingredients which are locally sourced. Chef Graeme Ruppel was kind enough to stop by the blog to talk about his philosophy.] 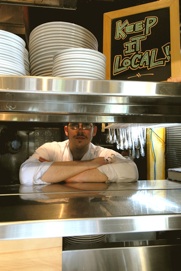 Over the last couple of years, as I moved from a kitchen grunt, unquestionably following the chef’s commands, to becoming a chef myself, I have seen how the decisions we make every day about our food can affect things well beyond the kitchen. We are voting with our dollars here.

When I started in the restaurant industry, if was at one outpost of a chain, where nearly everythingwas brought in frozen, preprocessed, preportioned, precooked…predone. As a sixteen year old kid, with some reactionary right-wing leanings, I thought that this was just how things were done. We were serving a lot of people each day after all.

But as I moved on, went to school, and moved out to Halifax, my view started to shift. I started to realize the importance of training your staff to do the prep work, to make something that was better than what the frozen boxes could offer. And as I got my techniques sorted out, the next step was starting to appear. That of seasonal, local cuisine.

Seasonal, local cuisine is not a new idea. It is the way things have always been, we just lost sight of that when refrigeration came along. The ability to transport, and maintain foods edibility, across long distance is truly a marvel, and has greatly expanded our diet. But it does come at a cost. Probably the best examples are fruit. Where do you think those strawberries you bought in January came from? Chile? Argentina? 8700 kilometers aways, those berries were picked when not even close to ripe, transported in a temperature and gas controlled container to prevent ripening (not spoiling, ripening), and then, upon arrival, the gas mixture is changed, to encourage rapid ripening so that they are ready for the shelves.

Now then. Eat one of those berries, and then wait till August, when the sun is beating down on you and the humidex is set to ‘kill’, find a strawberry plant (if you can find wild strawberries, even better), and bite into one of those. One will taste of the perfect encapsulation of the day, the other like sugar water. Wouldn’t it be worth waiting for those strawberries to be ready, even if it means waiting a full year? Trust me, there are lots of things that you can still eat between now and then.

I would like to present, as a case study, the city of Portland, Maine. In 2006, a report to the Maine Department of Agriculture found that only 4% of Maine’s food was being grown or harvested within Maine. The report also recommended, to ensure a safe supply of food (which is something I haven’t even touched on here) to its citizens, Maine needed to produce 80% of the food consumed there by 2020. Within a few years, Portland, having taken on the challenge, became a culinary hot spot, with one of the highest restaurants per capita in United States (after a recent trip there, I can attest that they were all busy. And it wasn’t even the tourist season yet), and was named as the “Foodiest Small Town” by Bon Appétit in 2009, just 3 years after making local food a serious concern.

And there is a lot of very good food being produced here in Nova Scotia. But not nearly enough of itis consumed within our borders. Everybody needs to be aware and make informed decisions in when they’re shopping. Even when you stop by Sobey’s, take a few extra seconds and find the products that are labelled as “Grown in Nova Scotia”, make sure to visit the farmer’s market, sign up for a CSA (Community Shared Agriculture) box and get some weird vegetables and teach yourself how to cook them. Get involved with what you’re eating.

Graeme started in the restaurant field when he was 16, dishwashing at a burger bar for a faceless corporation. After hopping through a few of Edmonton’s other large conglomerates, Graeme decided to actually get good at his work and enrolled at the NAIT School of Hospitality and Culinary Arts. It was during this time that Graeme switched from working for the Man, to working in smaller, owner-operator settings. After completing his schooling and finishing his apprenticeship, Graeme decided to leave his beloved, open prairies for the most drastically different place he could think of: Halifax. It was here that Graeme started his devotion to local and seasonal products; after biting into his first, fresh Annapolis Valley Apple. After a few tumultuous years, Graeme finally found a couple of guys who were as dedicated to giving a damn as he was. And that’s how he came to be the head chef of the Brooklyn Warehouse. Follow chef’s musings.

The importance of local food
https://haligonia.ca/the-importance-of-local-food-16727/