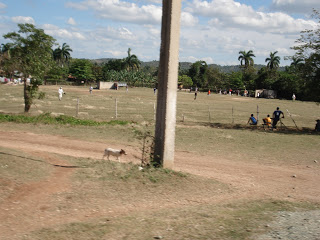 2 years ago I was in Cuba for a wedding and some relaxation. I was pretty excited for this trip because the wedding was my own and I knew I was going to the country where baseball has evolved into their national sport.
The sport of baseball is like football in England and hockey in Canada. The communist country has made baseball players their pet projects and many Cubans are heralded as trophies to be bred as stars and sent away as stars; with or without the regimes approval. I knew that this trip was going to be awesome and I was very excited to see anything baseball.
I will simply say that while in Cuba in 2008, I saw what I wanted and loved it. I met some employees that were baseball crazy, I met a couple internationals that were baseball crazy and I got to buy a Cuban handmade glove.
Let’s skip to present. I recently went to Holguin, Cuba. A resort where I knew I would have a better chance to see an actual game either in a pro stadium, in the street or a local village. I tricked my friends into a safari including horses, ‘seadoos’ and SUVs. This safari was my ticket to seeing a game one way or another and in the end I was disappointed but not completely. Here is the part that made my trip.
I was on the bus with the other 50 people headed to the resort and was listening to Enrique our tour guide. He was bantering on about this and that and cracking jokes back at the drunks at the rear of our bus.
That was when he spoke of a baseball player that I forgot was from Holguin, Cuba.
His name is Aroldis Chapman. I perked up. Thoughts raced though my head about seeing the stadium in Holguin and maybe where Chapman, a young man who just signed a $30 million contract in January, played his youth ball. I took the opportunity to talk to Enrique as soon as he was done.
I had to clarify what the yahoos in back were saying about Chapman because I knew if Enrique knew what they were saying maybe he would have some insight as to the baseball in the area. He might be able to tell me if there any games going on and where to see them. I leaned forward and said hello. We spoke about arriving in Cuba and how happy we were to be there blah blah blah. I had something to ask but was being polite. I sat fidgeting in my seat wanting to know about any games in or near Holguin. I was on a mission this trip and be damned if I couldn’t sit through some welcoming rants to get some baseball info out of a local.
Enrique interrupted me a couple times to answer some questions from the crowd but I still sat on the edge of my seat, arms hanging into his area so he knew I still wanted to talk. He started it up again and I jumped at the chance. I asked about any games or stadiums around that I could visit. Actually I asked him 300 questions in about 12 seconds and I think he registered them all.
Enrique turned in his seat and said “you came to Cuba for sun and drinks or baseball?” My wife was beside me so I said with a laugh “drinks and sun but baseball too!” I told him what the boys in the back of the bus had said and like Clint Eastwood in any of his movies he smiled and said in a gruff old voice “I know Aroldis Chapman”.
I sat a little closer and asked how he knew him because I am a skeptic when someone tells me they know a famous person. He said he coached him as a child because his main job is a manager of a Holguin community centre where the baseball leagues are run. He acts as a manager/coach/coordinator/mentor for any kids that are involved. Chapman was one of these kids. I wasn’t convinced but I knew how to find out if he knew Chapman. I was going to say something that I knew was the opposite of what was true and see if Enrique knew the difference. 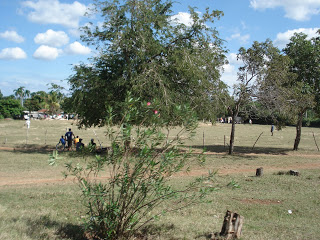 I was doing my best Magnum PI work to see if this was legit and if it was I was going to be pretty stoked. I told Enrique that Chapman had such a great attitude and that he should do good in the US. Enrique called my bluff right away. He laughed out loud and told me Chapman has a bad attitude and that the Americans “will straighten him out”. Bingo. We have a homerun!
Chapman was suspended by Cuban officials for being too cocky and complaining he could not pitch in a big international game. The officials decided that Chapman was a detriment to the team and therefore suspended for a year. Enrique was ready for that curveball and made my day with his reply. I asked him some questions about Aroldis and what he was like.
He told me that he was an amazing athlete. That he was always around the park and was actually annoying sometimes because he was always begging people to play baseball or have a catch with him. It wasn’t Chapman’s youth that I was enthralled about; it was the stories that Enrique was able to tell me.
What he was telling me was exactly what I wanted to hear; Cuban baseball stories of success and even defeat. He told me about his job and how many kids he saw go on to pro careers. He admitted he wasn’t their number one coach but he had a hand in their youth. He was a humble man and I sat on the edge of my seat for the 1 hour drive talking to Enrique about baseball. This man was the man who made Cuban baseball what it is; a legend, a builder, a coach; he was baseball to me.
I hadn’t noticed the drive and the next thing I know we are in our resort. I had gotten to know Enrique on the drive and found out he has a 25year old son who uses a left handed glove but he is a lefty. Bingo again. I had a left handed glove in my suitcase. I brought two gloves, four baseballs, a baseball hat and a soccer ball to give away. Enrique was smiling from ear to ear when I produced the glove. He told me to ask for him and his tour to Holguin and then I was invited to his home to meet his son and see the stadium. He told me exactly how to get there and he would show me around Holguin personally. He even told me he would take me to his son’s work which was a cigar warehouse where we could smoke the best cigars on the East part of the island. All this hospitality because I gave him a glove! He shook my hand and made me feel lucky to have met him. It was only the beginning of my trip too! I had big ideas for the week and it started with a safari trip.
I did manage to get the safari trip. It wasn’t hard because my wife and friends are adventurous. I also knew that I was going to be watching for baseball games while the rest of the crew was looking at mountains, houses and the odd animals in the fields. I made it through the day without seeing a big game; then it happened. We had seen some small games in the middle of streets, intersections and the odd grass field but no real game on a real field. We were headed to the marina, going down a steep hill into a valley. The hill was steep and made the drive fast. As we came out of the hills and into the flat of the valley, I saw a baseball game to my right. I spun around in my seat like a kid who just saw Santa. It literally yelled out loud and pointed and asked my friends if we could stop but we were a part of the convoy and therefore we kept couldn’t. My heart sank and it hurts to write about it. Truly it does.
As I type this, I am getting the feeling that I missed out on exactly what I wanted to see and do in Cuba. I wanted to go watch real Cubans playing the sport I love. I wanted to see their uniforms with holes in them, their handmade gloves, bats, balls and their skill and their love for the game.
I didn’t get to see some of things I wanted, I am more than happy to have started a story that I know I will build on as time goes by. I could not be happier I have these small victories to report. In two trips I met true baseball people, a real mentor to a pro and got to buy a glove that I will cherish as much as I cherish this great game.

Steve Betts is a regular contributor to Haligonia Sports, the colour commentator for Dalhousie Tigers hockey on ssncanada, and an avid baseball enthusiast. Steve lives in Darmouth and plays for the Halifax Wanderers senior Baseball team.

The Legend of Aroldis Chapman
https://haligonia.ca/the-legend-of-aroldis-chapman-14610/