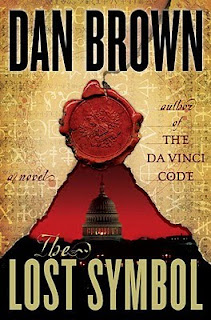 27 days, 14 hours, 22 minutes and 25 seconds …. 24, 23, 22… until The Lost Symbol by Dan Brown will be released. Seriously. The Lost Symbol has its own website counting down the seconds until the book will be available. How’s that for marketing?

Brown has waited six long years for his sequel to The Da Vinci Code, building excitement in his legions of fans. The Dan Brown marketing phenomenon has been examined in a marketing text book by Stephen Brown called The Lost Logo. It is written in the style of Brown’s books calling itself a Management Thriller. It deals with the formula that makes his books phenomenal successes and makes particular mention of luxury product placements, which he predicts will be even more prominent in The Lost Symbol.
The publishing world is gearing up for this release. Publishers have strategically timed other books’ releases so as not to compete with Brown. They are planning a print run of 6.5 million copies. Of some controversy has been the timing of the release of the ebook. The Guardian had this somewhat alarming headline a few days ago:
“Could Dan Brown’s new novel spell the end of the printed word?”
I would hope not, but the article does make a good point about the ability to flip from text to Internet to look up references. Very handy, I would imagine with a Dan Brown thriller.

I’m sure it will be worth the wait. If you need a few suggestions in the meantime (to fill in those 27 days) Novelist has a great article suggestions author readalikes for Dan Brown which includes John Case, Daniel Silva and Michael Crichton.