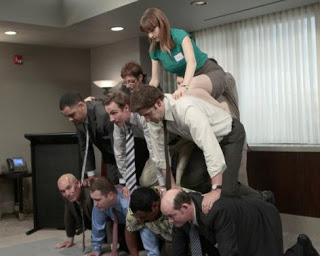 I don’t have much to say about The Office this week, other than I didn’t particularly care for the episode.

I’ll start with the positive. I thought Andy actually enjoying working at reception, and Pam and Darryl intervening because they knew he shouldn’t be there, was very funny. The organizing of pens, the cheesy signs, etc. Andy is totally cut out for that job, but he can’t do it because he’s the boss. The only problem I had was, what exactly does Pam do now? Why was she too busy to cover reception? If she just simply didn’t want to do it, then they should have made that more clear. But if she is actually busy doing a job she invented.

The Florida storyline, however, felt like a major flop to me. Dwight’s attempts to ignore appendicitis so he could impress the new boss felt so recycled, and Catherine Tate’s character seriously annoyed me. I also had no desire to see Todd Packer ever again. The only parts of this storyline that I liked was the stuff with Jim and “Florida Stanley”.

I thought the episode was disappointing, but I’ve still got a couple favorite quotes for you courtesy of Erin. What did you guys think?