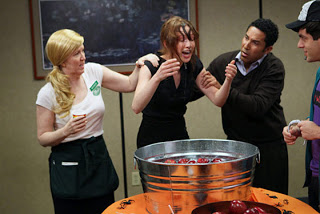 No one does Halloween quite like Dunder Mifflin. Thursday night’s episode was the funniest this season, and probably the funniest Halloween episode I’ve seen all year.
The Office has been killing the cold opens lately, and I think this one was the best yet. When Stanley accidentally drank orange juice from Jim’s mug and didn’t notice that it was not his own hot coffee, Jim had to ask “Is there no limit to what he won’t notice?” So everyone in the office started doing more and more preposterous things, from covering his computer monitor with a cardboard box to Andy taking his shirt off to Dwight bringing in a real, live pony. And he noticed nothing. It was spectacular.
P-P-P-Poker Face 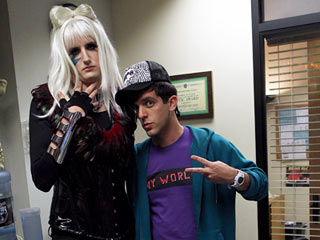 Then the Halloween fun began. Everyone at Dunder Mifflin always has such great costumes, so it’s hard to choose a favorite. Kevin as Michael Moore, Gabe as Lady Gaga, Michael as MacGruber, Dwight as the Scranton Strangler and Kelly as Snooki (I think?) and then as Willy Wonka, and Ryan as Justin Bieber were all hilarious. Poor Pam came as Olive Oyl, but it didn’t really make sense until Jim finally put on his Popeye costume at the end of the episode. Andy coming as the dude from True Blood was appropriately ridiculous and lame, but I didn’t realize until I read it online this morning that Meredith was supposed to be Anna Paquin’s character.
Everyone was taking their costumes extra seriously this year because the prize was a big coupon booklet. $15,000 in savings! Which, Oscar pointed out, you’d have to spend $200,000 in order to redeem. He traded in his costume for his normal clothes, saying he was going as “a rational consumer”.
The Dork Knight
The subplot this week involved Pam, who was still a little annoyed about how Danny hadn’t called her back several years ago. It didn’t help that everyone in the office was blowing their two dates way out of proportion. Jim tried to get the reason out of Danny, and he understandably lied, telling Jim that all Pam talked about on their dates was Jim. Pam, of course, saw right through it so the truth had to come out – Danny had thought Pam was sort of a dork. The storyline seemed kind of empty, until Jim delivered the adorable line “Who doesn’t call a dork like that back?” and put on his own totally dorky costume. It helped that he also brought the baby. No one makes fun of a guy holding a cute baby.
Power Struggles
The main storyline this week was a power conflict between Darryl and Michael. After Michael shot down one of Darryl’s ideas, Darryl took it to Gabe, who took it to head office where it was implemented. (The idea, which was having delivery people make sales on site, was a really good one.) Michael took the news that Darryl had gone above his head/behind his back quite hard, but I think the real issue was that with Gabe around, Michael is starting to feel like his job is redundant. If people can just go to corporate with something on their own, why is he there?
Having Oscar win the costume contest as a rational consumer was the perfect ending to the episode. Did you love this episode as much as I did? And which of these lines or moments did you laugh the hardest at?