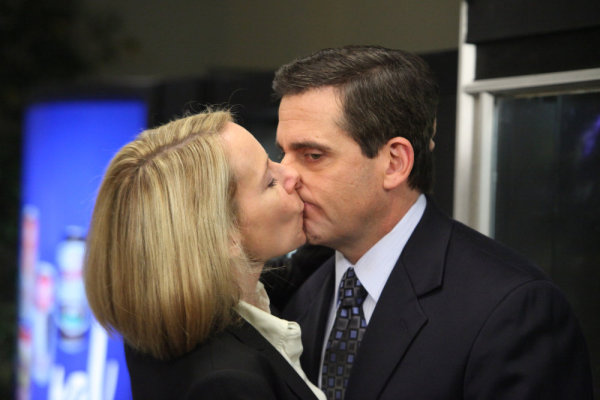 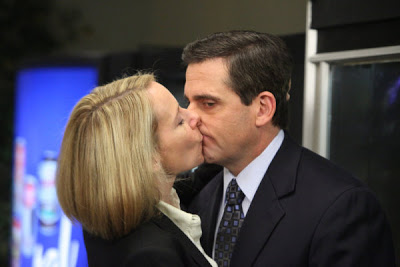 Michael and Holly are officially together, and it’s kind of gross.

My favorite part of The Office this week was everyone’s hesitance to point out Michael and Holly’s inappropriate office PDA. I guess since corporate (a different corporate, but still) had already broken them up once, no one wanted to risk that. Plus they’re so happy together! But also gross. Really gross.

Gabe was quick to stress Sabre’s acceptance of workplace romances, which is good since he’s in one. But a staff meeting on PDA was definitely in order. I also liked how Jim and Pam, the shining beacon of an appropriate workplace relationship, accidentally got drunk and ended up having sex in Ryan’s closet office. There goes that example! And you can’t point at Erin and Gabe as an example, because she was off on a romantic treasure hunt…with Andy.

Overall, I thought it was a really solid episode. There were a lot of laughs, and with Holly and Michael’s big decision to move in together, it looks like we’re really barreling towards Steve Carell’s exit. Toby has to come back from jury duty at some point (that jerk!) and it looks like that will have something to do with Michael leaving. Will he transfer to Nashua? Will they run away to Sandals Jamaica together? Whatever it is, I hope it leaves the couple happy and leaves the door open for the occasional guest appearance. If they have him rescue a woman by jumping in front of a bus, and we only find out it’s him when he writes “That’s what she said” on Pam’s hand before he dies, I’ll be really mad.

Did you like “PDA”? Do you hate public displays of affection (especially in a work environment) as much as Oscar and I do? Did you prefer Kevin’s monkey face to his squirrel impression? Sound off below, and check out these highlights: