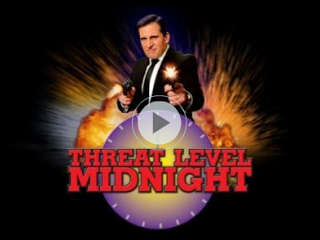 I have a feeling that people will have either loved or hated last night’s episode of The Office. Personally, I loved it.

The showing of Michael’s movie “Threat Level Midnight”, which had been eleven years in the making, was just flat-out one of the funniest things I’ve ever seen. Truly, I feel sorry for anyone who stopped watching this show after a bit of a lackluster stretch over the last season or so. Season seven, probably because it’s Carell’s last, has delivered some of the funniest episodes ever.

Michael had been working on this action movie for years, and the whole Dunder Mifflin gang was in it. He’d shown them a version once, but got super-sensitive when everyone mistook it for a comedy. Now it was finally finished, and it was glorious.

Michael’s campy performance as “Michael Scarn” was brilliant in it’s own right, but seeing everyone participate – even past characters, like Jan and Karen – really put it over the top. It was just a delightful half hour of television. The fact that Darryl had agreed to play the president because at the time he thought it would be good for his daughter to see a black man in that role? Amazing. Jim saying he agreed to do it to try and impress a certain receptionist? Adorable. Plus he had the old Jim hair, and gold face paint. What could be better?

The movie had everything you could ask for: suspense, romance, special effects, a musical/dance number. I especially loved how Rashida Jones had a moment where they tracked down Karen to ask her about her one line. I do have one complaint, though – why so little Kelly Kapoor? She would have been great in this!

Everything was going really well, until Michael realized that Holly didn’t really like the movie. He freaked out and turned it off, but in a surprising turn of events he actually realized that Holly was right, and the movie was kind of a joke. He laughed at it himself! If that’s not proof that Holly and Michael are meant to be, then I don’t know what is. It definitely feels like we’re nearing the end of Steve Carell on The Office, and I find myself wishing we had more time left.

Now, check out what I liked best from the episode: