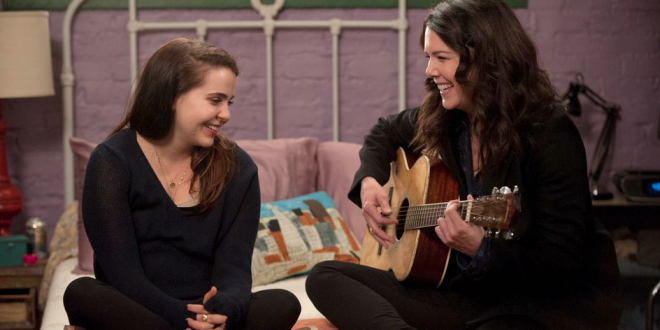 The Penultimate Episode of ‘Parenthood’ was Perfect

Thursday night’s episode of Parenthood, the second-last of the series, was simply one perfect scene after another. It created a swell of emotion that basically overcame me, and it was all I could think about the next day.

Damn. That was a great episode.

The episode kicked off with All The Feelings, and a beautiful scene shot outside where Zeek tells Camille that he doesn’t want to have the operation. A lot of this episode was about accepting the inevitable. We knew that Zeek wouldn’t want the operation, that Joel and Julia hadn’t solved all their problems, that Sarah would want to marry Hank while her dad is still alive, and that the Luncheonette probably wasn’t going to stick around. I think we all also knew that Amber would have a son named after Zeek. But none of that mattered, because it’s about how we get to those places, and how people react when they’re there.

Victor, obviously, was the most suspicious of his parents reuniting. Unlike spoiled Sydney, he’s a kid who’s been through a lot. I liked how Joel was so scared to have any disagreement with Julia, but Julia insisted that they do fight about their issues – resulting in the two of them yelling at each other in the car, to keep it away from their kids. This episode did a good job of showing us that while the reunion might bring up some messy stuff, Joel and Julia will be just fine.

Another scene I loved was Kristina and Jasmine fighting at the hospital over the Luncheonette. I’ve come around on Jasmine over the last couple seasons, but I’ve never been able to relate very well to Kristina – and I find Adam at his most annoying when he’s with his wife. They are very real characters, they’re just not people that I’m able to relate to much in real life, or enjoy spending time with. So I was mad at Kristina for convincing Adam that the Luncheonette is a bad idea (“I thought we were done with that”) and for telling Jasmine to basically butt out.

The arguing was perfect, especially because Crosby was so hurt that Jasmine had gotten involved. He wanted to work with his brother, and knowing that someone else had convinced his brother to do it ruined what was great about the business. But Adam saying “I don’t want to have to take care of my little brother anymore” was the height of jerk behavior.

The one part of the episode that I wasn’t in love with was the stuff with Chambers Academy. The show wants us to feel inspired, to feel that Max and his schoolmates could have a future where they are employed. But I’ve hated everything about that school, and how Kristina runs it, that I just couldn’t really believe it.

My absolute favorite scene from the episode (maybe of any show ever in general?) was Sarah and Amber singing that Joni Mitchell song together. God, that was beautiful. Remember how Amber kinda hated her mom in season one? Now Amber is telling her mom that she’s her hero, and she has become a mom herself. Sarah has become a grandmother. Sarah’s getting married. It was just so perfect.

Sidenote: The sneak peek of the finale showed Sarah and Hank’s wedding. I always felt a little cheated that we never got to see Lorelei have a real wedding on Gilmore Girls, so there’s a part of me that’s extra happy to see Sarah get the happy ending here. Also, Hank’s comment about a “stupid gazebo” felt like a dig at Stars Hollow and it made me giggle.

I thought this episode was very much about four generations of Bravermans, told through Zeek, Sarah, Amber and baby Zeek. The family dinner with the “original six” was chaotic and loud in that way that big families can be. The scene where Sarah went and told Zeek that she’s marrying Hank was so perfect, we didn’t need to see Zeek break the news to his children.

It was fitting that after the false alarm, when half the family showed up to the hospital only to find out that Amber had gas, that the real moment would be smaller. Just Amber and Sarah. (I loved the scene with Hank driving them to the hospital the first time, though.) That Zeek and Camille would be the first people invited to meet their great-grandson, Zeek’s namesake.

Oh man. I simultaneously can’t wait for the final episode, and don’t want to see it because then Parenthood will be over.