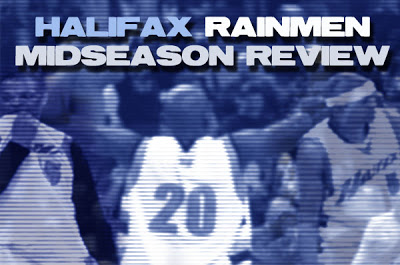 We’re at the midway point of the season and you can’t ask for much more from the Halifax Rainmen.  With only a 20-game season, every game counts.  Right now, Halifax sits in second place behind the Puerto Rico Capitanes and hold an 8-2 record.  The PBL playoff format only includes the top four teams at the end of the season and Halifax is in position take one of those spots.  What has made the first half of the season a success?  We’ll take a look at the highs and lows also known as ‘The Pleasure and Pain’ of this first half of the Rainmen season.

PLEASURE – The Highs of the First Half

The Core (Eric Crookshank, Desmond Ferguson, Tony Bennett) – A huge part of this year’s success has been the play of this core group of guys. Like the Boston Celtics, the Halifax Rainmen have a Big 3. With the return of Eric Crookshank and Tony Bennett along with the addition of former Manchester Millrat and sharpshooter, Desmond “Moneyball” Ferguson, this Rainmen trio has proven to be one of the best threesomes in the PBL. The fact that this core has remained on the roster for the first half has helped maintain the team chemistry that some of the lower tier teams in the league may be lacking.

Guards – Adding to the first half success has been the solid guard rotation of Adris DeLeon, Gary Ervin and Tony Bennett who have been killing opponents.  All three guys are quick, unafraid to attack the rim and can score at any given opportunity.  Unfortunately, Adris has moved on, and will continue his basketball career with the Dominican Republic’s national team.  This leaves an open spot at the guard position.

102-99 Win over the Rochester Razorsharks (January 31, 2010) – One of the toughest tests at home for the Rainmen was the matchup against the 2-time PBL champs, the Rochester Razorsharks. Rochester, who was undefeated at the time, had difficulties defending the Rainmen offense as Desmond Ferguson led the way and had 26 pts which included 5 threes. This was a big statement game for the Rainmen, as they displayed to the rest of the league that they were now a force in the PBL.

Game Presentation – Team president and CEO, Andre Levingston and his Rainmen staff have done a great job putting out a good entertainment package for Halifax fans.  This includes an excellent marketing program which encompasses print, radio and internet promotion.  The team also reaches out to the fans via social media mediums like Facebook and Twitter.  As a result of this, Rainmen basketball is becoming more and more apparent in the city of Halifax. The Rainmen games themselves have an NBA feel with everything from R$ $mooth handling the arena music, to the Weather Girls, all the way down to the guys running down the court with the Rainmen flags before and after the games.  And it has really reflected in the attendance.  The Rainmen have had record attendance this season and the schedule is fan-friendly with most of the home games held on the weekends.

Coaching – Les Berry and his staff have done an outstanding job with this year’s team.  After walking into the head coach role midway through last season, Coach Berry had the opportunity to come into the season with a fresh start.  The fresh start has helped both Andre Levingston and Les Berry work on a common vision that strives on a common goal of bringing a PBL championship to Halifax.

Defense – The Rainmen defense has been nothing but stellar with opponents only scoring 94 points per game (Halifax is the league leader).  When you have a defensive stopper like Garry Gallimore coming off of the bench and a big body like Marc Mazur down low at the five spot, it’s no wonder they are one of the best defensive teams in the league.

Canadian Talent – You have to shoutout the Canadian content on this team.  First of all, you have St. FX alum, Garry Gallimore, and former Michigan Wolverine and Toronto native, Jevohn Shepherd, coming off the bench for the Rainmen.  Both have made significant contributions for Halifax in the first half, and fans can only hope to see more from the two Canucks.  You also have Dalhousie alum and Halifax’s own, Devon Norris on the practice roster.  It’s just too bad that we probably won’t get to see him on the floor anytime soon.

PAIN – The Lows of the First Half

The Frequent Roster Changes – What’s minor league basketball without constant roster changes?  We’ve seen a handful of guys come and go on this roster.  Guys like Mark McCarroll, Shagari Alleyne, Cory Underwood and Antwan Dobie were just a few of the faces that came and went throughout the first half of the season.  Luckily, it hasn’t had much of an impact on the team chemistry.  The Rainmen will face its biggest test moving forward with the loss of Adris DeLeon.

Free Throw Shooting – The Rainmen are worst in the league in free throw shooting, making only 66.5% of their attempts.  If the Rainmen ever get into close game situations, especially come playoff time, the Rainmen will definitely need to make improvements.

The 108-101 Loss to Puerto Rico (January 28, 2010) – This game was a bit of a heartbreaker since the Rainmen were in the game up until the closing minutes.  But what made it a tough game to swallow was the fact Eric Crookshank did not make the trip to Puerto Rico as he was awaiting the birth of his baby.  The Rainmen were outrebounded 45-33 in that game and Eric’s presence would have had made a huge impact.

What were some of your highs and lows of the first half of the season? Let us know in the comments section…

The Pleasure and Pain of the Halifax Rainmen - A Midseason Review
https://haligonia.ca/the-pleasure-and-pain-of-the-halifax-rainmen-a-midseason-review-12104/