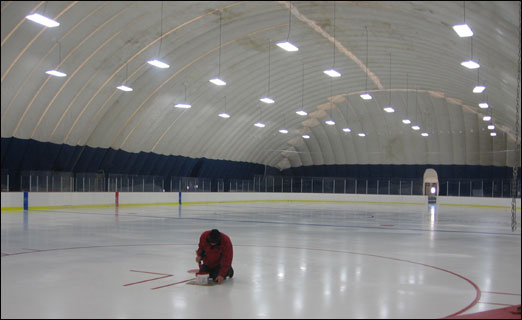 Finishing touches are added to the new Rocky Lake Dome, located at Duke Street & Damascus Road. The Dome is scheduled to be open for business on Monday.

The ice is in and, as of Monday, the rink will be in full operation.

The communities of Bedford, Sackville, Waverley, Fall River and surrounding areas have been waiting for a facility to accommodate this growing area.

With funding from both the Provincial and Federal Governments, and almost 10 years of hard work, the Association “has accomplished the first phase of the Rocky Lake Common.”

The $30 million project is now ready to enter its second phase, and the Rocky Lake Development Association will need the support of the federal, provincial and municipal governments and the community.

“There is “not a donation that is too small or too large to make this happen,” stated Carruthers, one of the board volunteers.

Approximately $5 million dollars will need to be raised for furture phases of the develpment.

Phase 2 envisions the construction of two artificial turf soccer fields. One of the soccer fields will be inside a dome during the winter months.

Also in the plan is a tennis facility, expected to be running in 2010. The facility would include a clubhouse and indoor and outdoor tennis courts.

The message that came across? Bedford residents need to donate time and money for phase 2 to quickly become a reality.

But for now, “Phase 1 will provide desperately needed ice time for the children and members of our community which will serve to address this shortage,” stated Mason.

Inside the Rocky Lake Dome:

-Size of the Dome-230 feet by 110 feet.
-Rink Size-18, 000 square feet (regulation size).
-The Dome is inflated to 1.5 inches of air by an electric fan (increased to 1.75-2 inches for stability in high winds). There is a propane-powered auxiliary backup system (It has successfully weathered two major storms-Hurricane Bill and Post-Tropical Storm Danny since it was first inflated).
-It takes 45 minutes to completely inflate the dome.
-The height of the ceiling above the rink surface in the Dome is 40 feet.
-The Ice Plant requires 2500 gallons of brine created from 10, 000 lbs. of salt plus water. It is cooled to-6 degrees Fahrenheit/-22 degrees Centigrade.
-There are 11 miles of cooling pipe embedded in the rink surface. To prepare the rink surface, a floor bed of sand was laid and levelled to within 3/8 of an inch (measured by laser). Two layers of styrofoam were added. Then, the pipe, encased in rebar was laid. Three hundred and twenty yard of concrete was then poured and levelled by laser. (From start to finish, it took eight hours to pour the floor). The surface was allowed to cure for one month before the ice surface could be created.
-There are four dressing rooms, all with in-floor heating systems.
-The temperature on the ice floor is between 18 and 20 degrees Fahrenheit.
-After the Dome was brought to Bedford, a cut was made across the top, and a Velcro zipper system installed to allow two tons of insulation to be added to the Dome. That ensures an extra two months of operation, so the Dome can be used as a rink from October to April.
-The Dome and boards were purchased second hand. The total cost for the Dome and the boards was approximately $120, 000. The Rocky Lake District Association purchased a new inflation unit at a cost of approximately $70, 000.
-The Zamboni was purchased second hand (and fully reconditioned) for $36, 000.
-Total size of the Rocky Lake Common-50 acres (purchased from the St. Paul’s Home at $30, 000/acre. The RDLA offered the HRM a portion of that land for additional rinks at the same price, but was rejected).
–The project was completed on time and on budget!