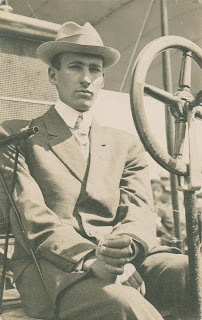 So, you’ve heard of the Wright Brothers, but not J.A.D. McCurdy?

Brush up on your Canadiana and check out the Nova Scotia Archives’ tribute to Canada’s first pilot, who took to the air in the Silver Dart on February 23rd, 1909, in Baddeck, Nova Scotia.

The Silver Dart was Canada’s answer to the Wright gliders. The skill and innovation of talented individuals like McCurdy and inventor Alexander Graham Bell made it a reality.

McCurdy said of the experience:

“It was a brilliant winter day and the ice of Baddeck Bay was completely free of snow. We wheeled the aircraft out of its shed on the shore amidst the incredulous stares and remarks of a couple of hundred spectators who had gathered to witness the event. I having taken my seat, the machine was released and after a run of about a hundred feet, took to the air. I landed on the ice about half a mile away and taxied back to the starting point, and I think the thing that impressed me most was the look of absolute astonishment on the faces of the spectators.”

McCurdy went on to become Canada’s first licenced pilot, a pioneer in the aviation industry, and even held office as the Lieutenant Governor of Nova Scotia for five years.

To learn more about the Silver Dart and celebrations on Monday for National Aviation Day, check out the Centennial Celebrations: Baddeck 2009 website.