So, I’ve been taking part in this To Be Read Challenge on the blog all year, and for the most part I’ve been doing pretty well keeping up to date. Until now that is: I’ve slipped a bit behind in my challenge reading over the summer months. My last post was in August (for the Book Thief) and I had taken a little vacation since then, but I got back on the project with what seemed like a sure-fire summer winner: a short memoir about the love of crossword puzzles. I had visions of long sunny afternoons in deck chairs, reading for half and working on puzzles for the other. Sadly, it didn’t work out that way: neither the weather nor the book co-operated.

My latest pick has the full title of: Pretty Girl in Crimson Rose (8): a memoir of love, exile, and crossword. The author, Sandy Balfour, is a British journalist and crossword fan. And we’re not talking regular crosswords here, we’re talking cryptic ones (the title of the books itself is a cryptic crossword clue*). I first heard of this book a number of years ago when a friend was reading it. I have always been intrigued by the newspaper cryptic crosswords, which are thoroughly baffling to me. I read the clues, can’t imagine what the answer might be, and then read the answer and can’t imagine how it makes sense. 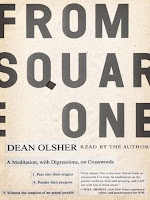 I came to Pretty Girl in Crimson Rose, hoping for a book that would tell me a story and, at the same time, teach me how to do the cryptic crossword, but I quickly found out that wasn’t what this book is about. The author talks about his passion for crosswords, but he really seems to be talking to other people who are already passionate about crosswords (and more importantly, understand them). The story is filled with examples of clues that he has encountered over his time as a crossword fan: clues that have entertained, fascinated and delighted him. Sometimes they are explained, but infuriatingly, sometimes they are not!

The memoir aspect of the book was interesting, but like the crossword aspect, it felt like a bit of a mystery. Balfour, originally from South Africa, but living in the UK now for several decades, talks about the UK and South Africa, the politics of Apartheid and the experience of being a immigrant: but he does so from the position of a person who is very comfortable with those topics, and I didn’t feel that he fleshed them out enough for someone who wasn’t already familiar with them. There were parts of the book I enjoyed: having lived in the UK myself, I could relate to the parts when he talked about UK culture. My favourite parts of the book were ones where he talked to crossword setters: an eccentric lot of folks who actually create these baffling puzzles.

I feel like this book would be a good read for someone who is already a capable crossword puzzler, and who enjoys a light memoir from an affable writer. Surprisingly, this book isn’t the only crossword memoir found in the library collection:

Interested readers might also want to investigate Zen and the Art of Crossword Puzzles : a journey down and across by Nikki Katz.

There is also the history of crosswords in From Square One : a meditation, with digressions, on crosswords by Dean Olsher.

In the meantime, I’m waiting for the on order book How to Master the Times Crossword by Tim Moorey to arrive at the library, and hopefully give me a few more clues.

* For the clue “Pretty Girl in Crimson Rose (8)” the answer is “rebelled”. In eight letters a word that means “pretty girl” (belle) that falls within a word for “crimson” (red) that gives the meaning of rose (ie. to have risen up). Or that’s what I understand anyway.