Home / Life / The Reader / The Universal Language of Mathematics – part one

The Universal Language of Mathematics – part one

“Pure mathematics is, in its way, the poetry of logical ideas.” Albert Einstein

Mathematics is often called a universal language. Like the traditional languages, math and numbers have developed over centuries of use and thought.

Andrew Hodges wrote One to Nine: the inner life of numbers, a ten chapter book that tells the origins of each number. Note: chapter 1 is dedicated to the concept of nothingness, which we call zero. Chapter 2 is for one, the number for the first, the primary, and wholeness. He draws on literature, philosophy and puzzles to illustrate the often-underestimated importance of a whole number. 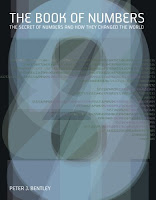 Similarly, The Book of Numbers: the secrets of numbers and how they changed the world by Peter J. Bentley discusses the significance of numbers, not just the original, rational 0 through 9. In this case, chapter one is called Chapter -1, referring to the concept of zero and the strange notion of the negative. Chapter twelve is called 12a: triskaidekaphobia…the fear of the number 13. Each chapter discusses a specific aspect of math, whether the creation of complex numbers, the invention of the computer and its languages, numerology and chaos theory. This book is full of fascinating photos of people and devices, as well as simple diagrams that explain methodologies.

Math is deeply entrenched in our society, in ways we may not have considered.

Peter Higgins’ Nets, Puzzles and Postmen discusses the math of networks. More than just computer networks, he looks at the connectivity of groups, and the interrelation of objects in groups. He cites various conundrums that, in various forms, continue to pop up: the 9-step network of Tic Tac Toe, how to colour a world map with only four shades, and how to cross all the bridges in the Konigsberg puzzle…without crossing twice.

John Bryant and Chris Sangwin wrote How Round is Your Circle?: where engineering and mathematics meet, which discusses the relationship between mathematics and engineering. The crossover between theoretical math and practical design are the focus here; how does one guarantee that a circle is round, for example. Is a straight line still the shortest distance between two points, even when the points are on a spherical planet? He calls on trigonometry, geometry and algebra which can be heavy. He pairs them with simple graphs which illustrate his points, and shows models and tools from the history of engineering and calculation.

Michael Blastland and Andrew Dilnot, hosts of the surprisingly popular BBC 4 radio show “More or Less”, wrote The Numbers Game: the commonsense guide to understanding numbers in the news, in politics, and in life. They take math that appears in the media and show the proper, unbiased interpretation.

Jason Brown’s Our Days Are Numbered: how mathematics orders our lives may be lighter fare. Each chapter opens with the narrator’s progression through a day. He discusses measurements from the kitchen and conversions while driving. He interprets graphs in the newspaper, compares statistics for politicians and gamblers, looks at game theory, discusses concept of chance in our decision making. A fun and fast-paced read from someone who lives mathematically.